A full weekend day without rain. Wow. I mean. I’d heard legends but… just wow.
So I immediately took full advantage of the day by sleeping late. Crud.
And before doing anything with the bench, I hauled out the grinder and reground the bevels on my #7 after an earlier argument with a knot: 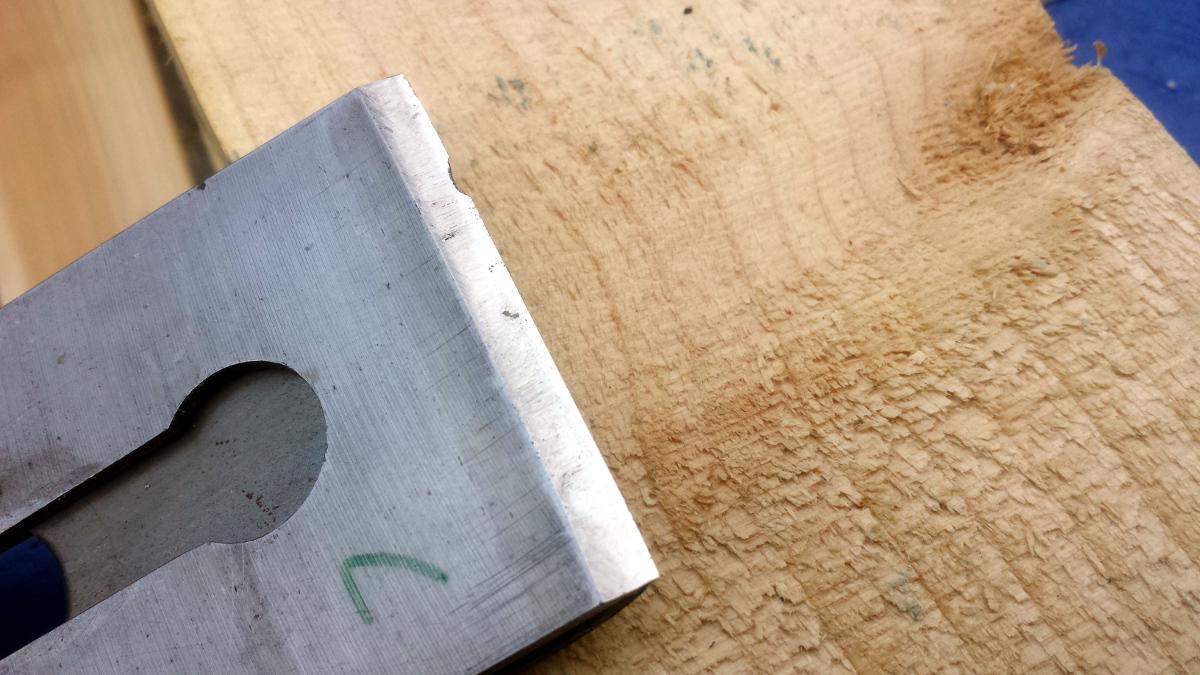 And since I was doing that, I reground the camber on my scrub plane to make it a little more aggressive: 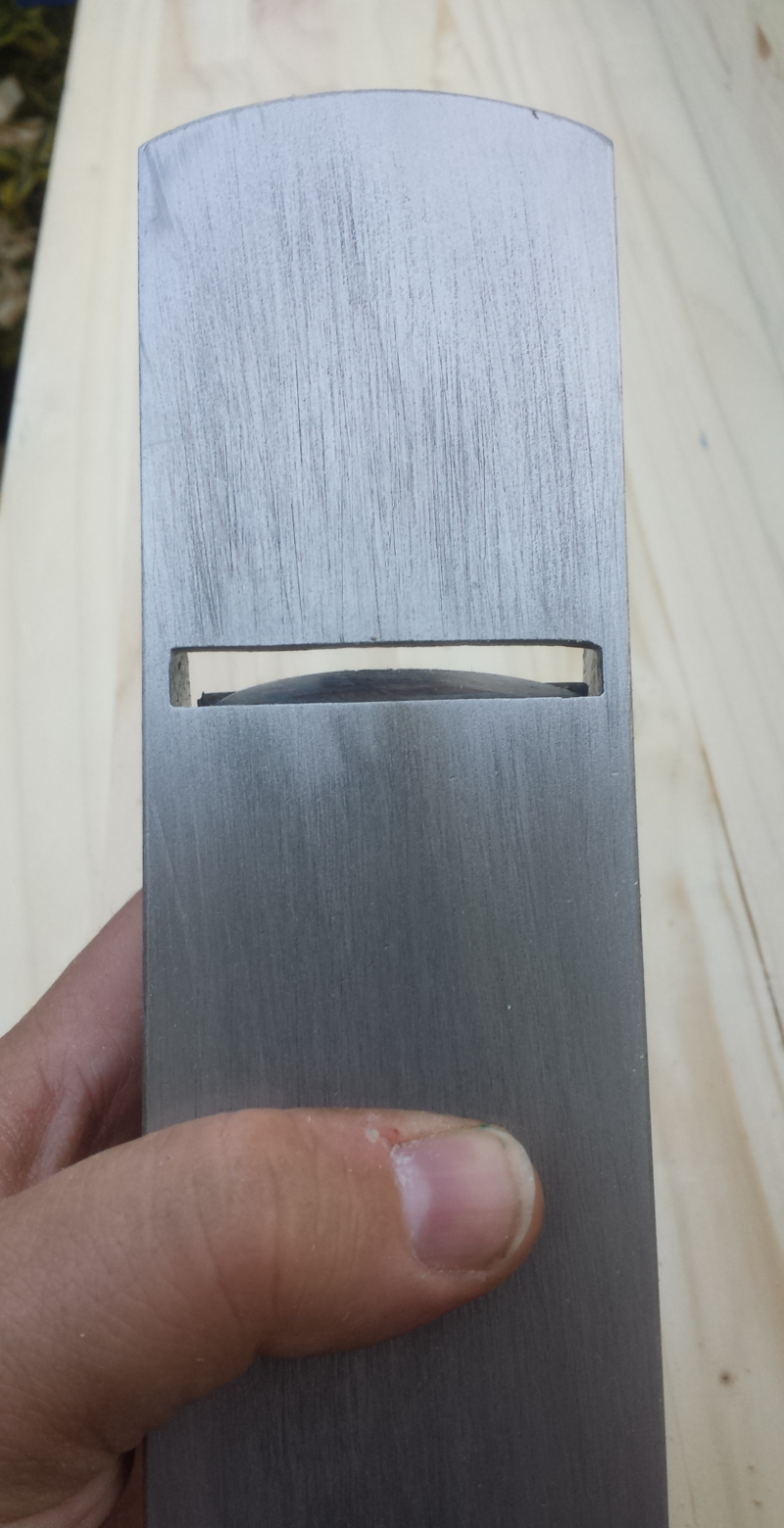 I may need to rename that thing Sid. I also reground the stanley blade in my #5½ record to put a less aggressive camber on it than sid’s, so that I’d have a second scrub plane but with a longer base. And I cleaned up the bevel on the new record blade I got for the #5½ (the stanley blade didn’t match the cap iron so it was pretty awful as a normal jack plane blade; so now it’s the scrub blade and the new one’s the jack blade). With all that done, I got out the sandpaper and diamond plates and started sharpening blades (and for the hell of it, lapped the sole of the POS scrub plane too, and it seriously needed it). I even tried freehand sharpening for the scrub planes with half-decent results (turns out an eclipse jig does a pretty good job teaching your muscles what the angles feel like).
And finally, an hour or so after starting, I was ready to start. Bloody hell. I know if you’re given ten minutes to chop down a tree you should spend five minutes sharpening the axe, but I’m starting to think whomever said they could sharpen an axe in five minutes was a lying person of questionable parentage.

Anyway, this was where the benchtop was on Friday: 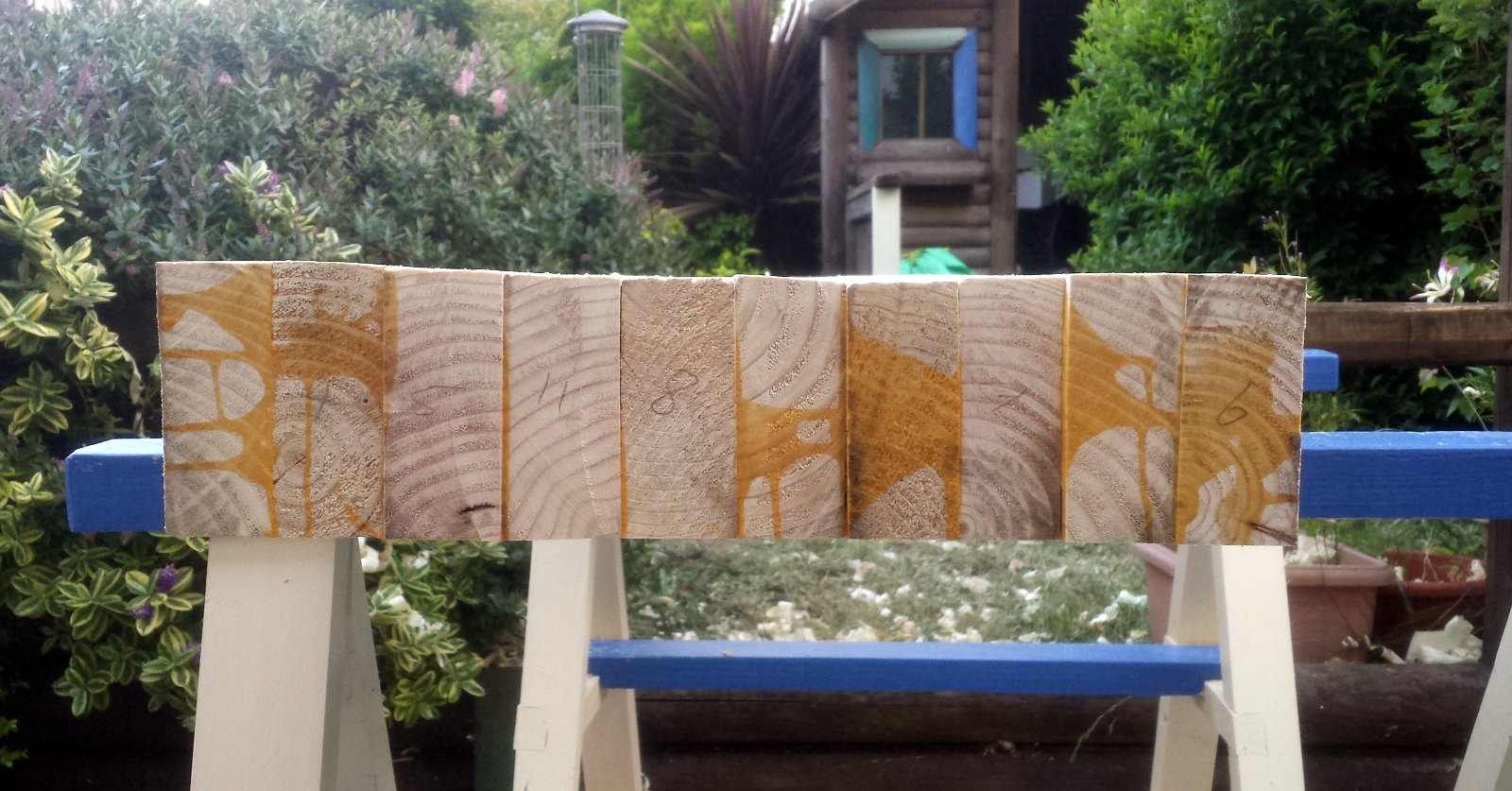 And after a half-hour or so with the scrub plane on Saturday, I got it to here: 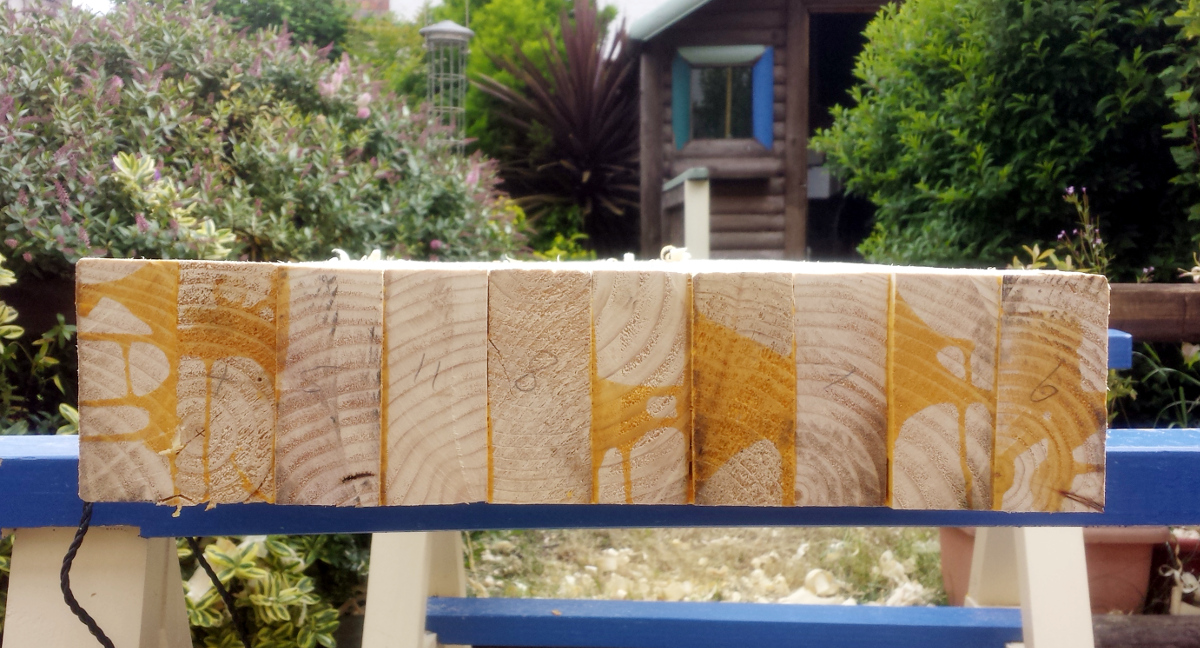 So I got out Sid, and had at it. Ten minutes of cross-grain hacking with Sid and twenty more with the #5½ scrub plane, the last few of those being stop-check-plane-curse-recheck minutes, and I got it to here:

And then I put the #5½ back into jack plane mode and gave the top some smoothing to take out the gouge marks from the scrubbers (phnarr, phnarr) and even ran the #7 over it for a minute or two: 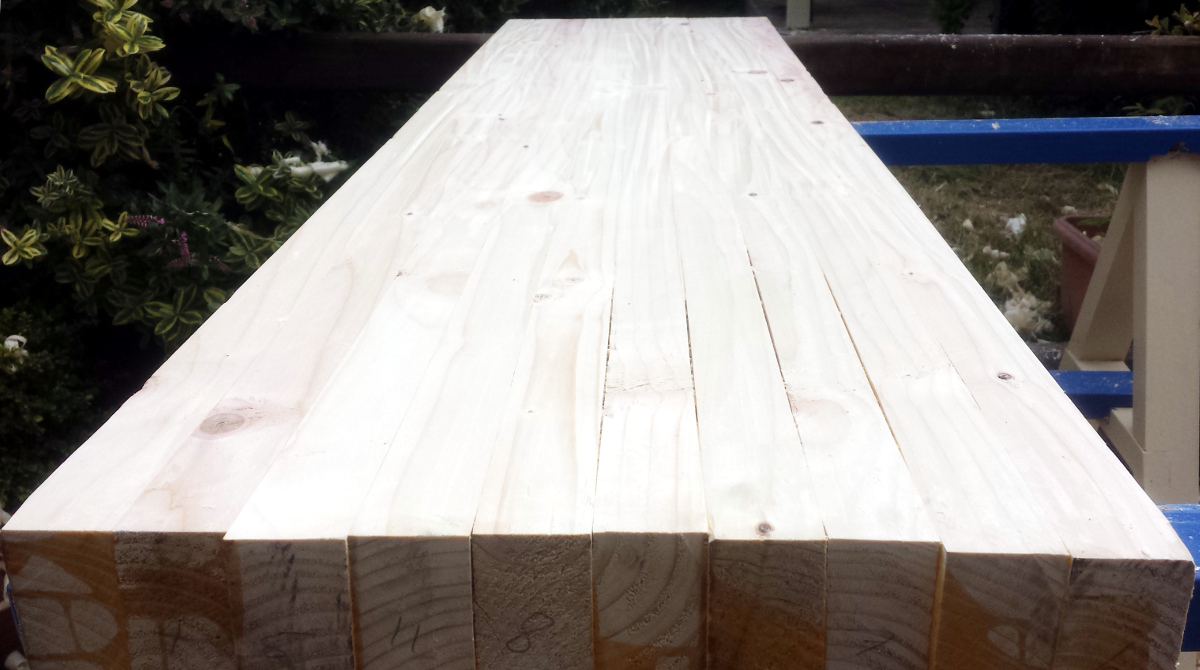 I was just about to cheer and then I remembered that the benchtop has two sides.
Yeesh. Flip it over, and let Sid loose on it… 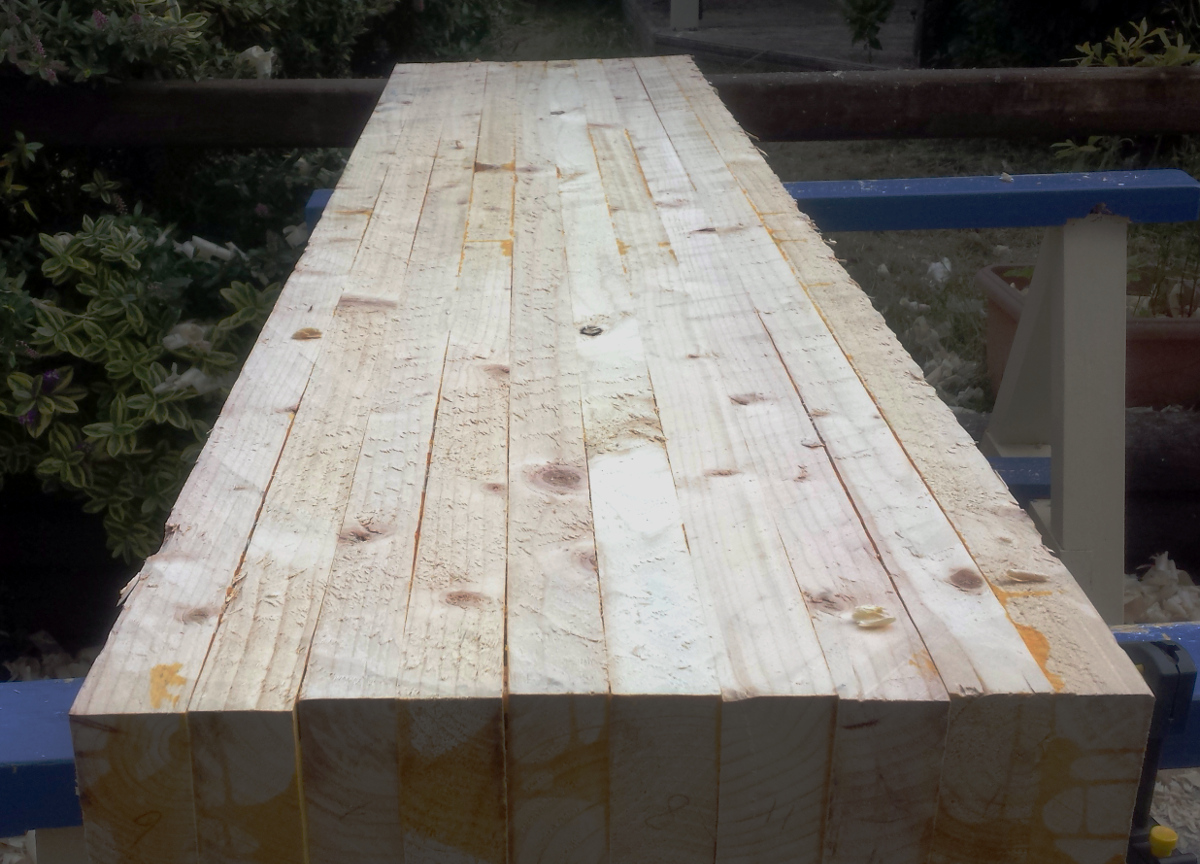 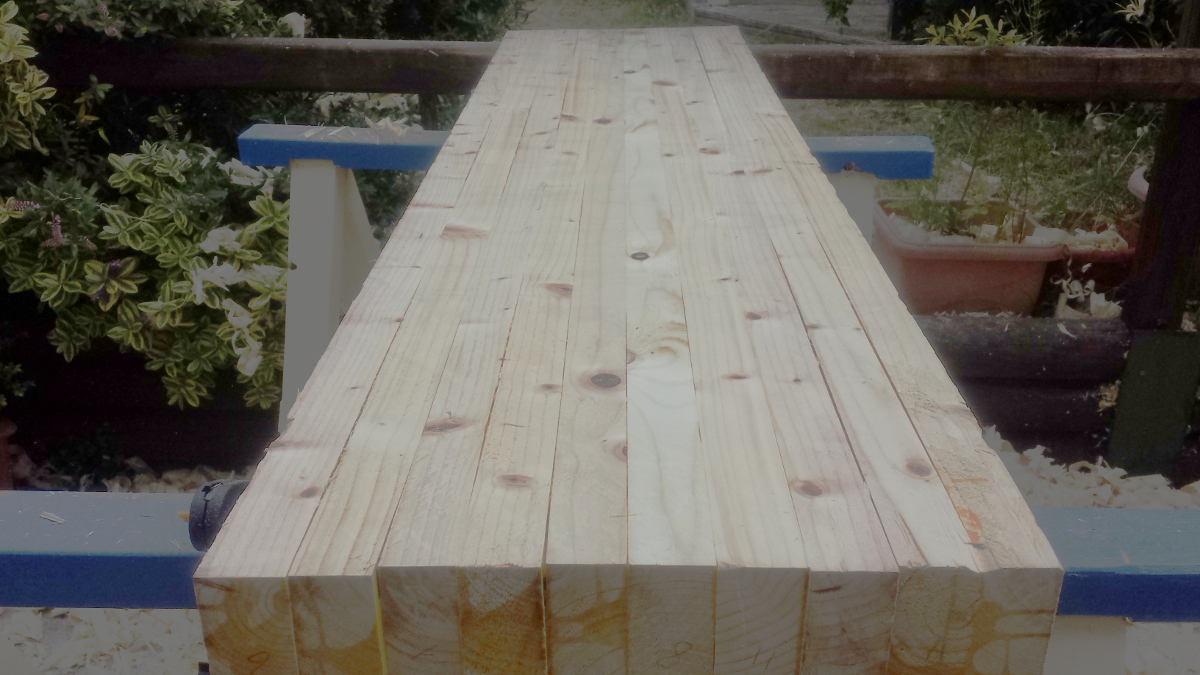 And then, right when I’m about to start cheering, check for twist.

OH COME ON!!! Stupid wood.
Out with the #4½, set to a heavy cut and started hacking. And hacking. And checking. And how the hell did that high point become a low point? SOD! Hack some more. And check again. And on and on and finally have something that’s as straight as I can see…
…and then flip it back over and the other sodding side is twisted too. AGHHHHHHH. Back to the hack/check/hack/check/curse/hack/check cycle. But eventually, more due to exhaustion overwhelming perfectionism, I get to here and call it done…

I think it’s flat enough for now….
So I still have some daylight left and that idea about the vice leg (stolen from Christopher Schwartz via the Apartment Woodworker) was still rattling round in my head, so I got one of the spare 63″ 2×4 lengths I had left and the vice leg; planed the glue face on the spare length; and marked off one against the other (dodging a large knot in the process): 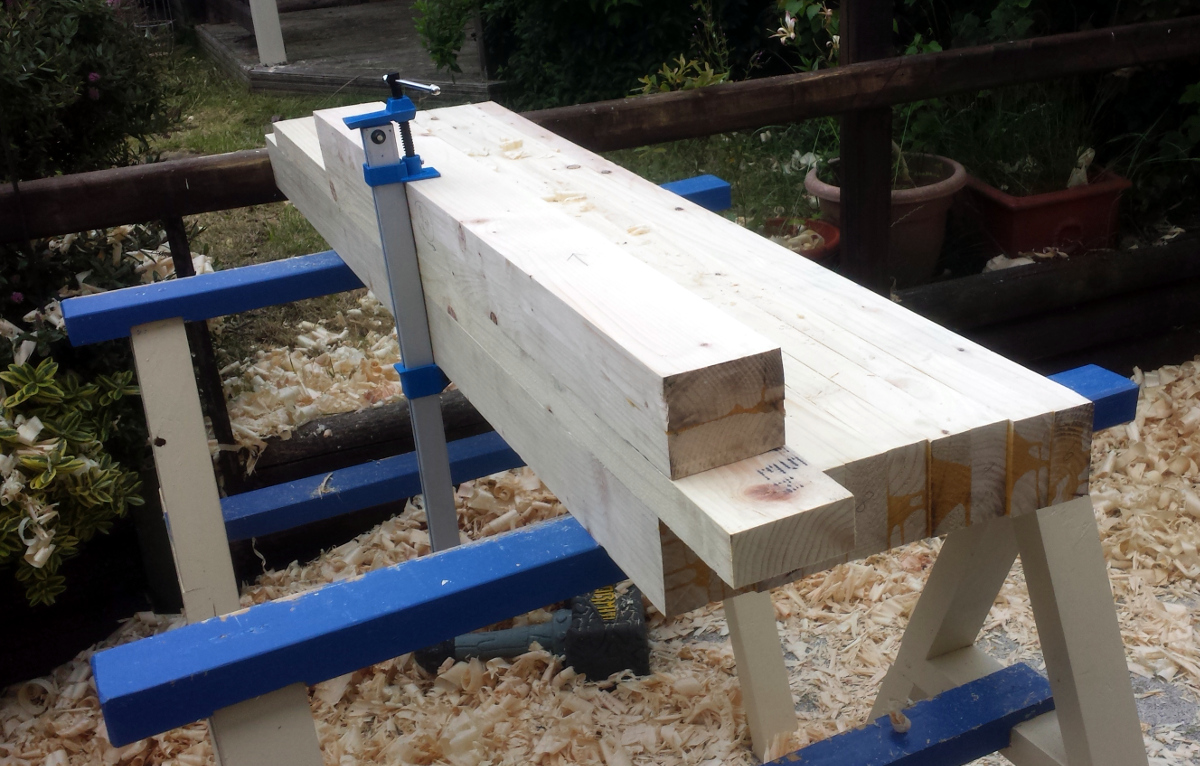 Out came the marking knife, the chisel to do the Sellers knifewall thingy, and the HOLY CARP WILL YOU LOOK AT THE SIZE OF THAT THING ryoba japanese saw I got from Dictum to do the trimming end cuts on the benchtop and legs: 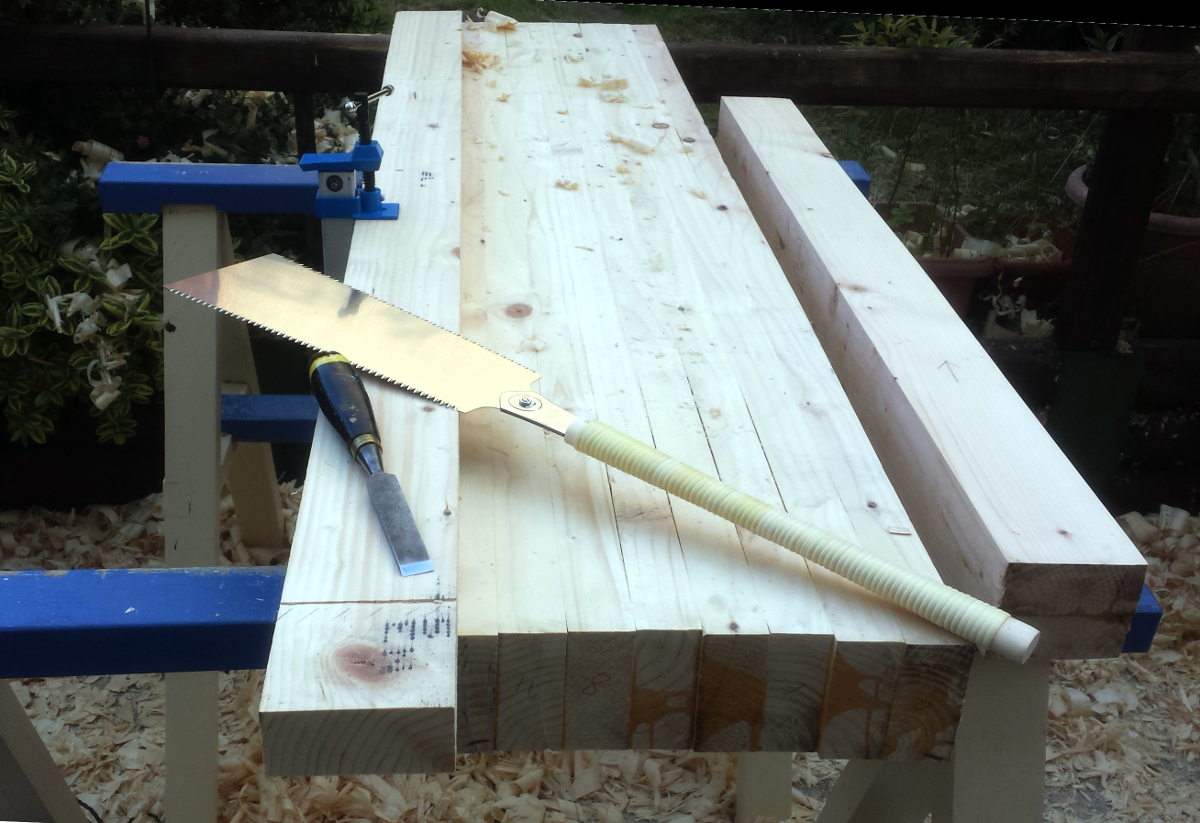 I’ll admit to using a small set square to watch the vertical orientation of the blade initially, but mainly I was just too busy being blown away by how much easier this is on top of a robust benchtop with firm clamping of the workpiece and at a height that was comfortable. I can’t saw to a line to save my life on the workmate; I’ve tried enough times to convince me to spend money to buy a mitre saw. But the very first cut on the benchtop with a brand new saw and without even having the bench assembled or the vice attached? 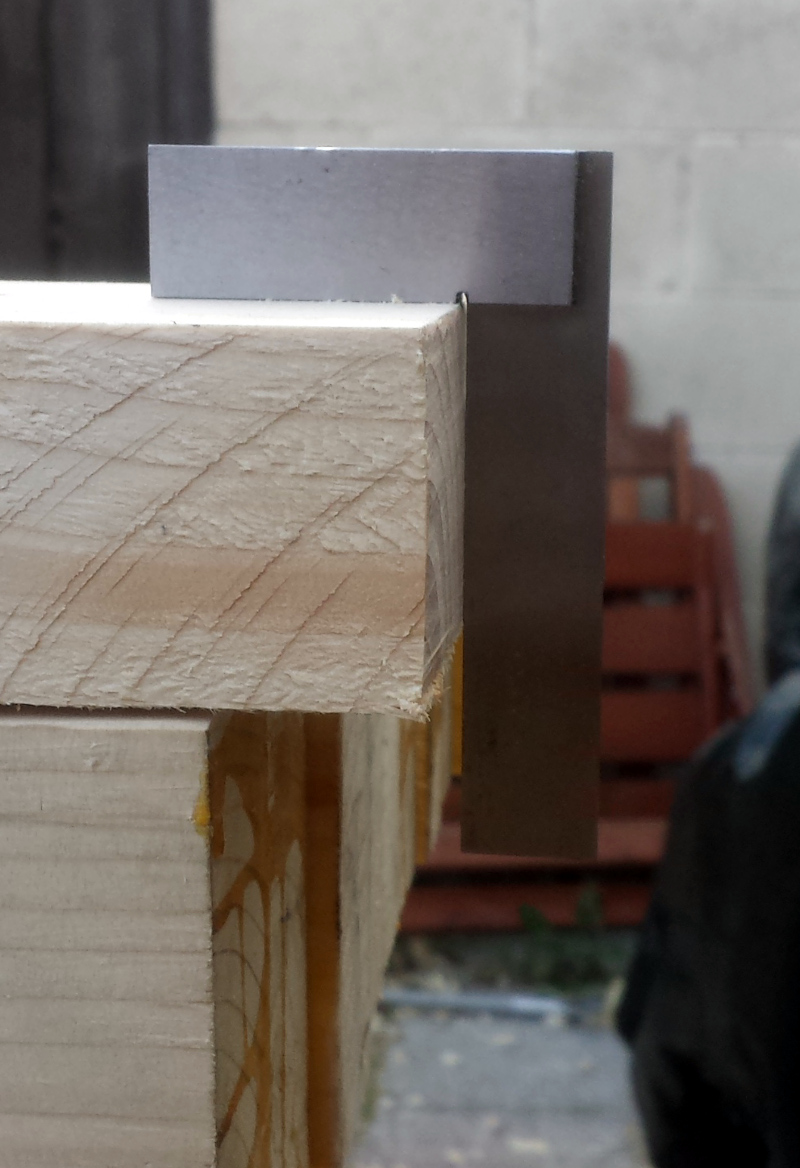 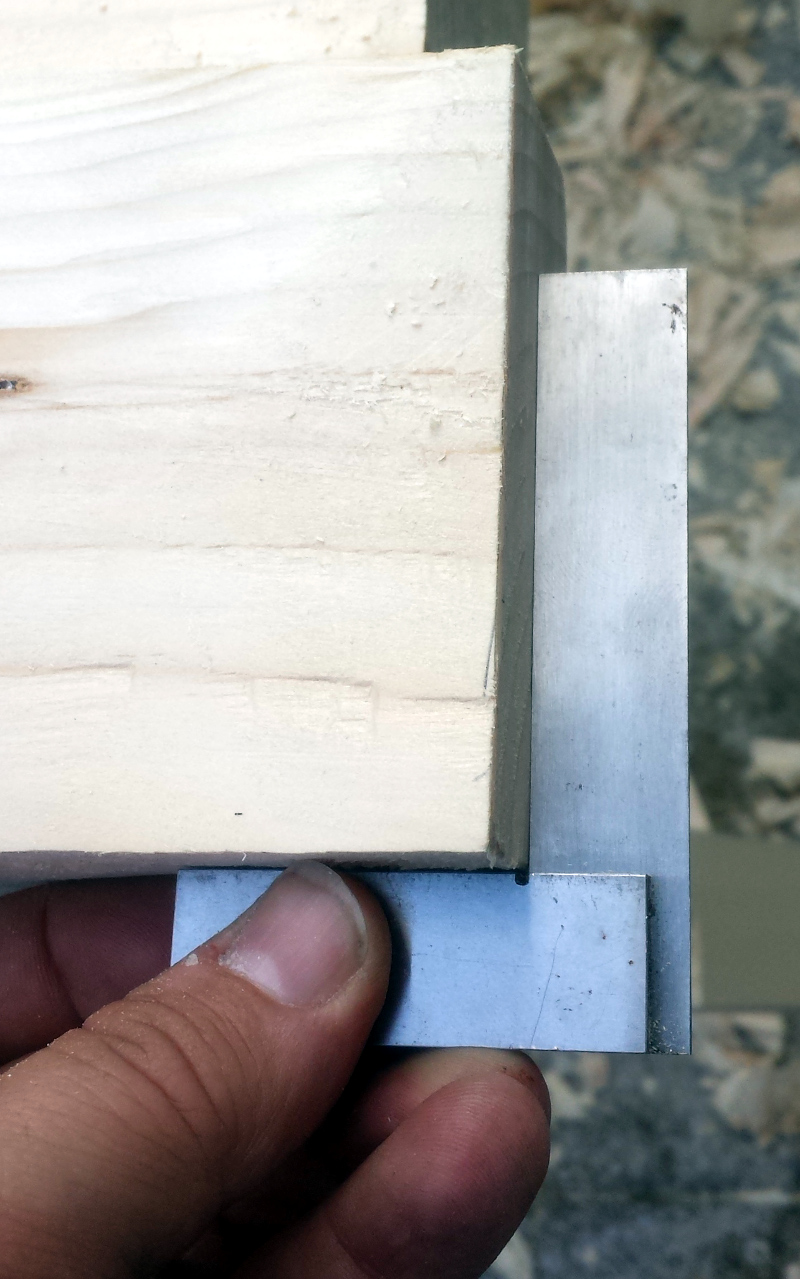 I am waaaay too happy about that one cut. I mean, this is the point where I say something that starts with “Booya” and ends with HR having a discussion about inappropriate words for the workplace. But I’m a nontrivial amount of cash into this project so far and this was the first indication of what the bench would be like to work on and WOW is it ever worth it.

Anyway, finished cutting the new board to length – by the way, the most difficult thing about using a large Japanese saw is resisting the urge to swing it round your head, scream lip-synced gibberish and attack Godzilla by trying to saw through his ankles. If you can avoid that, they give great results pretty readily. Then I set up the clamps and got out the greaseproof paper, did the dry run and then did the actual glue up, making sure to not let the unplaned edges line up with the planed edges of the leg (so now both the unplaned edges are proud of the planed surface on the leg so I can plane them all down more readily).

Then tidied away all the tools, wrapped the glue-up in one tarp and the benchtop in another because OF COURSE it’s forecast to rain for the next week, and went in to sit down to have a cup of coffee. Which was when I realised that my arms weren’t working anymore…