Back to the shed 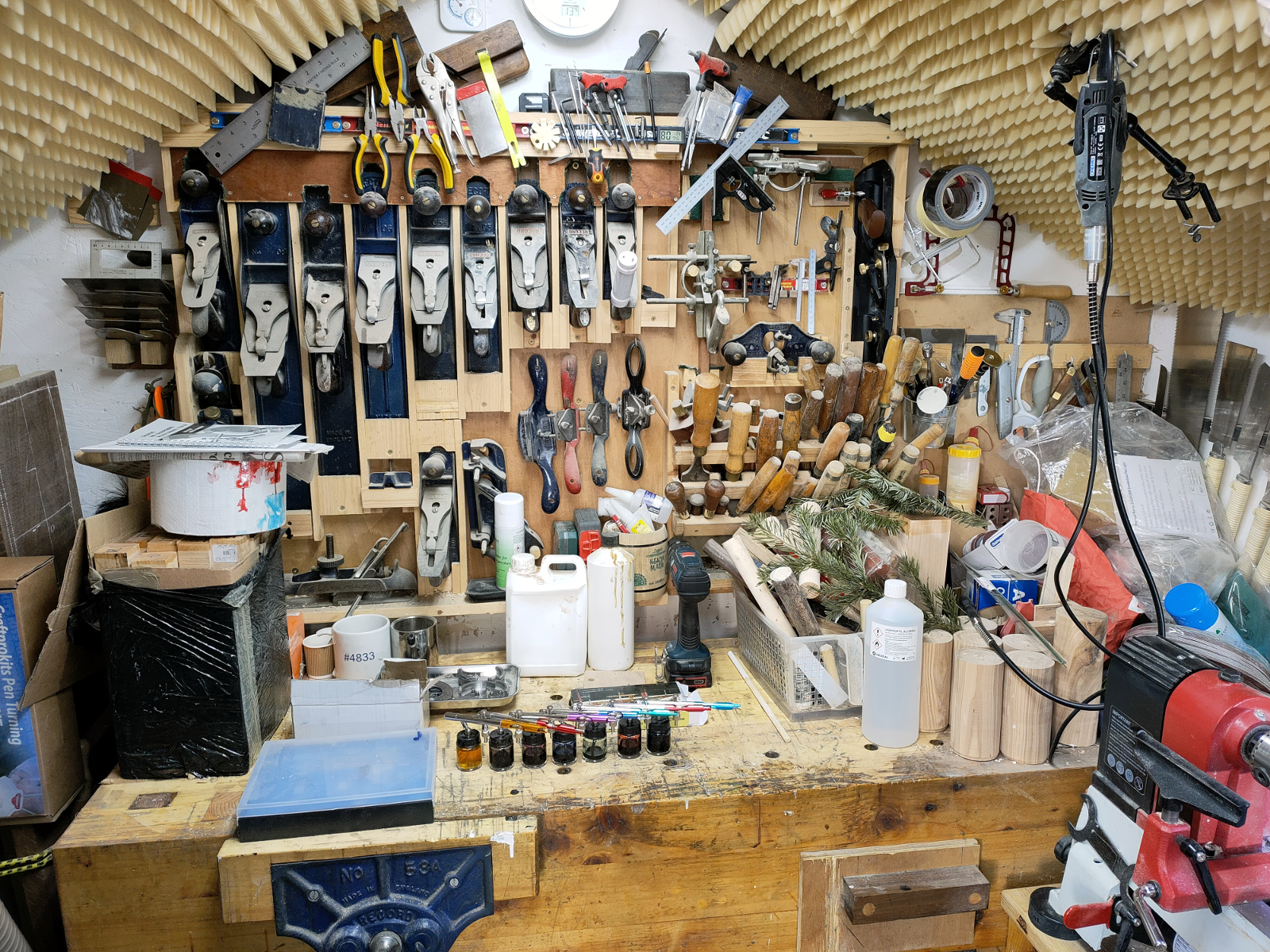 So technically, I’ve been back in the shed for a little while now and have just not been typing up blog posts as often. The finger has healed up well, though I did have to retrain my phone’s fingerprint sensor and I’ll have a nice scar because bandsaw cuts aren’t like knife cuts in that they remove material instead of just slicing it. Incidentally, I did finally finish up what I was doing when I had the whoopsie:

Oh well. During the downtime, I was looking at what to do about my broken air compressor. The company I bought it from has decided going radio silent is a very effective approach to my queries as I can’t drive there and walk in and ask them to honour their warranty, so for the moment the options were repair an air compressor myself with no real knowledge of how to do that (oooh, pressure vessels, what could possibly go wrong?) or to go buy a new one.

Meet my new air compressor. HBM machines are in the Netherlands (near Gouda) and managed to ship it to Ireland with no muss or fuss, and the thing is nearly silent. Compared to the Draper air compressor (the broken one) the Lidl compressor I got years ago is rather quiet – the Draper is somewhere around 90dB and the lidl somewhere around 80 (and dB being a log scale, that means the lidl is like, nearly half the volume). This new HBM one claims it’s 58dB.

And I believe it. It’s astonishingly quiet. And it cost the same as the Draper. The problem is, it’s a 3L tank and it’s designed for airbrushing (hence the regulator/moisture trap and smaller fittings). That’s cool, as it’s so quiet I could now use it in the house for modelmaking and in the shed for wood colouring until I figure out what to do with the Draper or just buy another 6L compressor for the shed for nailguns and such – though if I buy another one, it’ll be HBM as well, they’re just astonishingly quiet and cheap at that size range.

Still need more work on those, so having a usable-in-the-house compressor would be nice.

Once I got back into the shed, I started in on the little shop jobs that had been waiting to get done. So, first off, this has been sitting in a box since my birthday unused because, well, it’s in a box out of sight and therefore out of mind and that’s very very annoying for a very useful and spendy tool…

I want that up on the wall, and I’d been thinking about where. Putting it where the T5 is wouldn’t work – it’s longer and shaped differently and it just wouldn’t be easy to get it fitted. But the Record #050 combination plane that I have, well, I don’t use it very much at all since I started getting old wooden hollows and rounds. That seems to be a thing with combination planes – they were designed to replace hollows and rounds but they fell into the “jack of all trades master of none” syndrome. So my #050 is just gathering dust (the plough planes on the other hand, are absolute workhorses of things). So that’s where the Veritas is going to go.

So flush-cut saw and chisels to remove those dowels, the scratch stock got moved as well (that’s the Lie Nielsen scratch stock – it’s rather a nice design, based off an old stanley, and it wasn’t even spendy which is odd for Lie Nielsen).

Then a toe block, a side block, a little cover to help hold the toe in place… except unlike all the other planes, this is technically a nose block because the blade’s pointing downwards rather than upwards – I would prefer it the other way round but the blade would then be out in the air so I’d need a taller side block to keep me safe from accidentally planing my own fingers whereas here the side of the tool board hides the sharp edge of the blade.

The idea was that there’d be a covering board at the top as well like there is with the other planes, but the design of the plane is just awkward because it’s like a piece of angle iron instead of being like a piece of flat plate. So instead there’s a toggle clamp holding it in place. It’s a bit on the heath robinson side but so far it’s worked quite well.

Okay, so that was one job down, and numbers two and three are there on the bench – first off, one of the two chucks I have was giving me grief and I thought it was down to something in the scroll gear being worn or chipped and I could fix it with some filing – so I stripped it down totally, pulled the scroll gear and nope, nothing chipped or broken. I deburred any burred edges, repainted everything in moly grease and reassembled and nope, still has the issue. Every few turns of the chuck key, the mechanism jams. It turns out that the central bore of the scroll gear is not tight enough to the central core of the chuck so every few turns, you can push the scroll gear off-axis enough to jam it up. Rotating the chuck 180° on the lathe by hand and then continuing to turn from the other chuck hex port will usually unjam it. It’s irksome, but that’s what you get when you buy ex-demo stock I guess.

So after that – and I didn’t take photos and you’ll know why I didn’t touch my phone while using moly grease if you’ve ever used moly grease – it was time to tidy up the airbrushes.

Just some bits of plywood, glued and with two or three panel pins holding them together while the glue cured. There are chest latches on the ends because I want this to attach to the shelves but also be able to be taken off and put on the bench when I’m using them.

The holes were a holesaw in the drill press and then the bobbin sander, and the ledge under the holes is only half as wide as the top bit so that you can get a finger under the glass vials in case they got stuck or something:

You might be able to just make out there that you can get a finger under the glass jar of the airbrush. And it’s also stable when loaded and on the bench.

And you can see that the front edge of the finishes shelf acts to support the weight of the airbrushes while the chest latches hold it in place (and the finishes shelf itself also unlatches from the dust collection cart for when I’m emptying the extractor).

Last thing for this post – two 260mm squares of 12mm plywood glued together, then cut into a rough 250mm circle on the bandsaw after the glue cured, screwed the faceplate to it (because I don’t use the faceplate much anymore now that I have the faceplate rings), turned it and sanded it to nicely smooth…

And then contact adhesive to fix some plastic sheeting to the face of that (the non-slip stuff that you get for lining shelves – I wanted router matting but couldn’t find any for less than a hundred quid including P&P!).

Doesn’t look great but works well – it just has to be a conformable surface that wouldn’t damage the rim of a bowl. To use it you take a bowl that’s almost done but still needs work on the foot, pin it to the plate with the tailstock and that’s enough of a hold to work on it.

I’ll cover that bowl later, there’s a story to that one, but I’ve used this once or twice now and it’s worked quite well. Colwin Wey uses them a lot instead of cole jaws and they’re waaaay more convenient (he calles them push plates, I don’t know if there’s another name for them):

There’s been a few small projects since this, I must write them up as well.