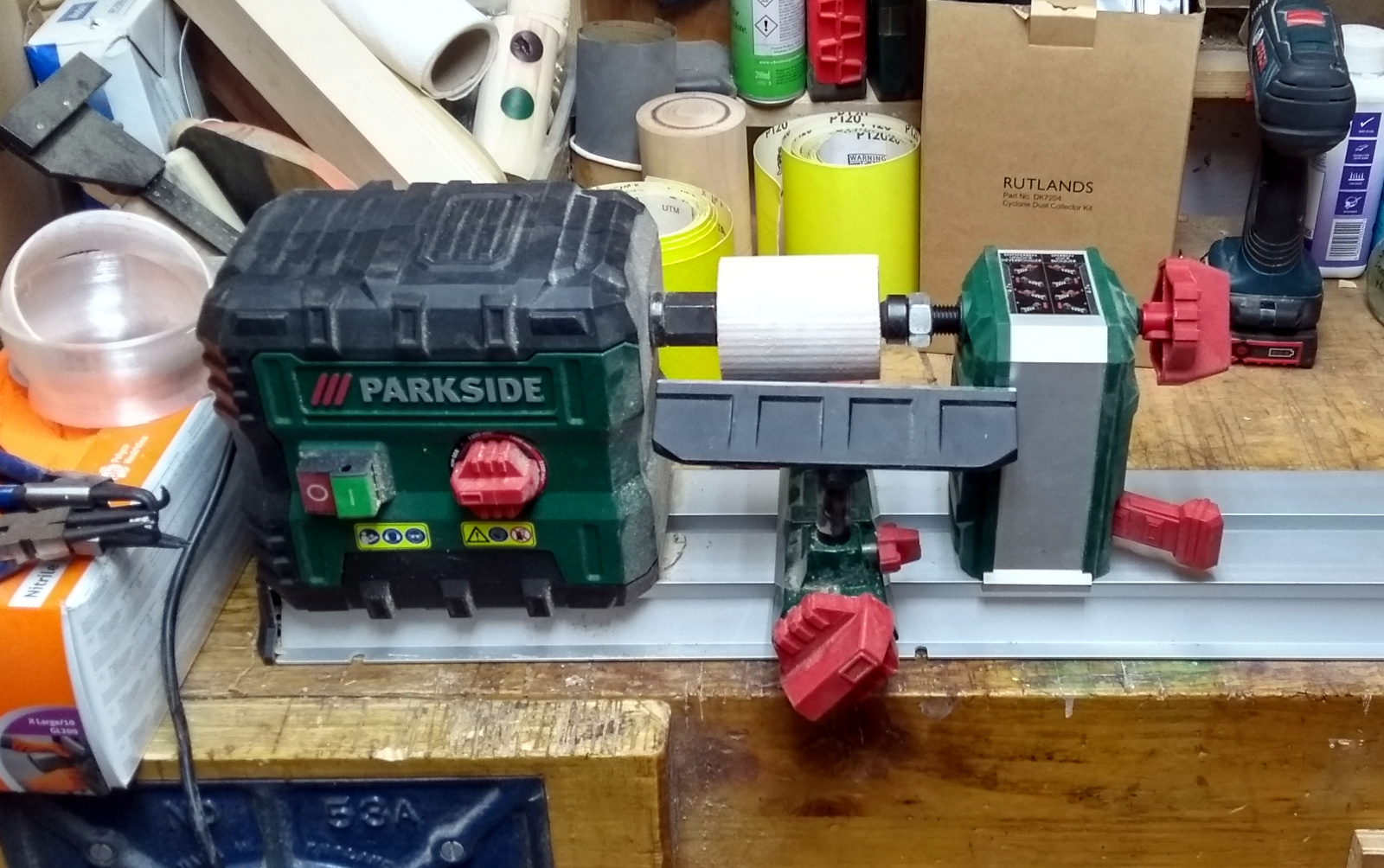 So I was tidying up after the last bit of turning and was planning on starting into routing the lathe dust collection host across the ceiling and into the cyclone lid I’ll be making using a rutlands kit to replace the dust devil clone I’m using at the moment.

But to build the lid I had to find the plywood I have left and that was behind the lidl lathe, which I’ve been meaning to test again since before lockdown started, and just hadn’t gotten to, and if I tested it it would mean I could put off hard work for a day so, out it came 😀

Now, the last time I played with this was before anyone knew what Covid was, so it’s been a while. And at that point, I had not gotten my minilathe, hadn’t done any of the course on turning, and hadn’t spent any time actually turning. I’m still not terribly good at it, but I have been riding that bevel for a few months now and I’m almost at the stage where you know just enough to be dangerous, so I was wondering how my opinion would have changed. So I put the lightest miniature blank I had between its centers. By the way, this thing came with a faceplate (made out of pot metal) and claimed you could turn bowls with it. Let’s be clear, the only way you’re adding a faceplate to this thing is with a welder. There’s no control to lock the spindle to remove the drive center. I’m not sure what they expected you do to loosen the center, the manual claims it can be removed but I have no idea how. I mean, look at it:

Anyway, set it up…

And then tried to adjust the rest. Several times. And just gave up in the end. Can’t get into the gap between headstock and tailstock on a blank that size.

Worse, you can’t really adjust the height very much at all. If you want to use a scraping tool of any kind with this (except for a shear scraping pass with a gouge), give up now because you can’t get the rest high enough to get on centerline while also having the screw clamp the rest securely.

Also, no, I’m not using the “tools” that came with it. Seriously. No. Not doing it. Well, not with the gouge anyway. The skew might be usable if you reground it and your last name is Jones and your first name is Steve, but honestly, I’m not even sure about that. So I used my own bargain basement HSS tools.

Okay, so first off, I’m not good at one-handed turning. Don’t do it much, bar when parting or tweaking something I think is too thin and will snap without some steadying. So with both hands, I could get a single pass with the roughing gouge, but the rest isn’t helping much. It’s almost sticky in places for some reason. But that’s a small thing in the grand scheme of things.

Far worse is that that’s the lathe at about 40% of its max speed. Except that it’s struggling to maintain speed and you’ve no gearing or anything to let you get more power into the spindle to maintain the speed in a cut. So instead, you have to turn the power (and speed) up, considerably, and then the bearing start to scream. Listen for yourself (this is up to about 80% of max):

You can hear it at 40-50% struggling to maintain speed, then crank it to 80% or so and cut, and it still can’t maintain the speed in the cut but it can at least turn fast enough to fake it, but the bearings do not like the load at that speed.

They claimed, don’t forget, that this thing could turn bowls. With a straight face.

Also, using the skew is nearly impossible because you can’t get the rest high enough while keeping it locked to the rest, so the whole thing is just awkward. If the lathe had any power at all, it’d be sketchy.

I mean, okay, it looks almost clean, but you can’t see the tearout, which wasn’t great. I got out a spindle gouge and turned a sort-of-shape, but it was a lot of work, and where on the minilathe you’d feel like you had some sort of control, here you felt like you were behind the curve continually.

And here’s a major problem for me – the lathe does not generate enough power to turn the lathe when the speed is set to it’s slowest setting and you’re trying to sand with 80 grit paper. I mean, the secret to my woodturning is that I buy 80 grit in bulk, so that’s a bit of a problem.

Yeah. Nope.
It has now been booted with prejudice from the shed. Total waste of eighty quid. Could have had a pack of bowl blanks for that as well 🙁 Avoid unless you want it for parts (and even then, I don’t know what you could use them for). Save your money and get a second-hand minilathe, you can pick up an older minilathe model for the 150-200 euro range on adverts.ie or the like – and I mean things like Charnwood W815s and Record Power Dml36sh lathes which are not bad choices. I did the turning course on a DML36sh and they’re grand – actually better than my minilathe in fact – more length in the bed and the headstock rotates IIRC so you could do larger bowls than I can. The W815 is basically the same casting as my minilathe, just with a different badge and some minor differences that are small enough that I can use some charnwood parts on my lathe at the moment (chuck jaws to be specific).

But the lidl lathe? Yeah, it’s only fun if you’ve not tried an actual lathe. The minute you do that, you see all its flaws and notice that it doesn’t really have any strengths at all. Avoid.