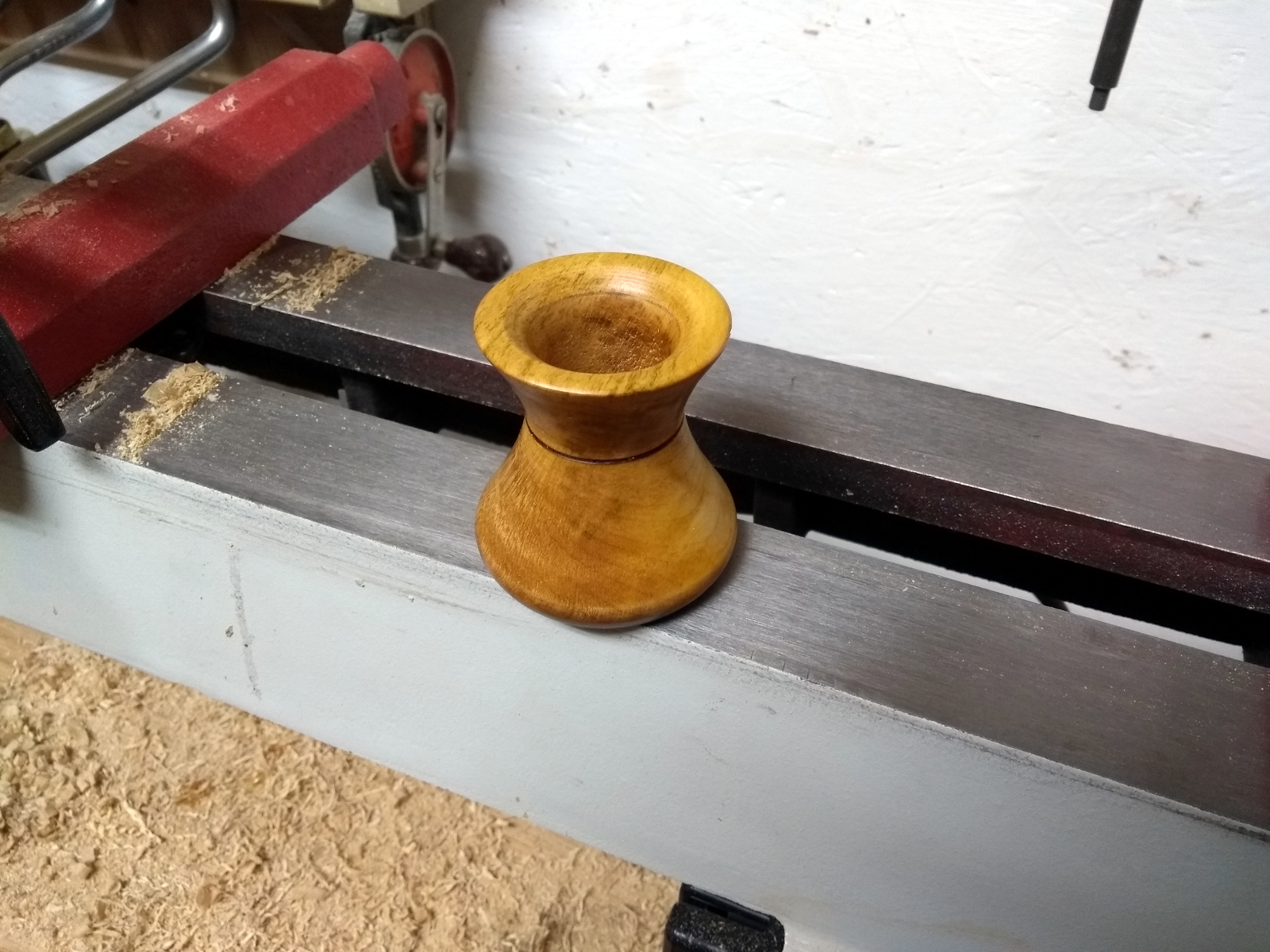 So two of the miniature blanks I have are quite small (well, the clue’s in the name I guess), and are less than 3″ in diameter – they’re about 2.5″ or so. I was thinking I could try to turn them into very small vases, by drilling out the inside. So that’s what I did this evening.

Too small to put in the faceplate, that one. It’s almost small enough that you could fool yourself that it’s a spindle, but that’d be a mistake, you’re seeing endgrain come round at you there. Even at that size, that’s no fun for a spindle roughing gouge.

So first off, parting tool, and turn a tenon on the base, and chuck it up. Then out with the jacobson drill chuck on the MT2 arbour and a small fostner bit…

Very much pecking with the wheel on the tailstock. Two turns, blow out the dust with the air compressor, two more turns and so on. You can get about 30mm of travel that way, then wind the quill back into the tailstock and move the whole tailstock 30mm forward and repeat, checking the depth with a vernier caliper.

And done. That’s about how deep you can go with those bits as well (70mm). Need a bit extender to go any deeper and I don’t have one. Next up, turn a nice profile into it.

This is kinda belt-and-braces, but, hey, that’s okay. Lots of careful bowl gouge work later (and also some on the inside of the lip after retracting the tailstock) and…

Yikes. I never even saw that splinter on the lip of the vase (it’s the remnant of a knot just off that point on the blank I think). Broke that off by hand.

Bit more gouge work and sandpaper needed for this.

Yeah, this idea didn’t work either. You can’t get a solid grip with these jaws (or my other set). One catch and it’ll be out of those jaws and boucing off my faceshield if I try. So back to centers it is.

And a bit more turning on the bottom to get a nice undercut base and a better curve.

And a bit of work with the parting tool to try to minimise any bandsaw work cleaning this up. Won’t lie, every time I use the parting tool that close to a drive center, I’m just waiting for the loud bang as I shove a tool into the spurs and the lathe tries to push it through my face. But got away with it this time.

Tung oil today, followed by two coats of lemon shellac and some beeswax.

It won’t win any awards, but it turned out okay and I still have all my fingers and no bowl gouge through my neck. So I’m calling it a win.

That’s spalted sycamore in case you were wondering, by the way.