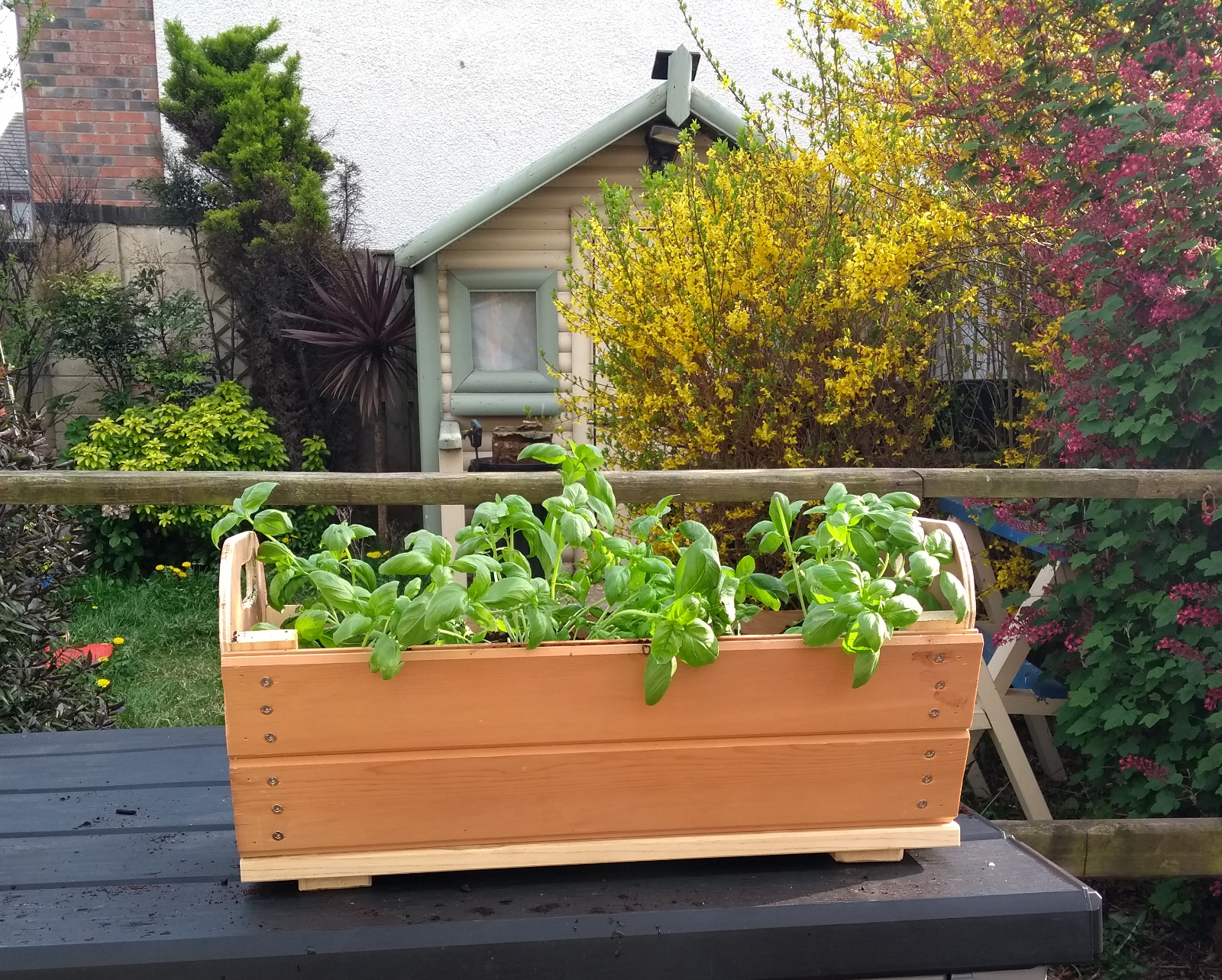 So with the lockdown in Ireland now extended to May 5 – or The Lock-in as we ought to be calling it the way WW2 was The Emergency – garden centers are closed (apparently the Greens asking us to feed ourselves from our window boxes full of lettuce didn’t make Woodies an essential business 😀 ). I ran around one before the Lock-in commenced and got a lot of seeds and potting compost (and we already had a general-purpose liquid fertiliser and tomato feed and for high-nitrogen stuff like Basil, well everyone knows that trick of mixing eggshells and used coffee grounds with their compost, right?); but I thought we had more planters than we had. Seems I threw the ones we did have in the bin a few weeks ago because the UV had finally mangled them past maintenance’s hopes. Oh well.

I do have a shiny new brad nailer…

Why yes, those are a lot of bowl blanks, and yes, my first bowl is all finished off and put to work as well, thanks for asking 😀

So I found some of the cedar T&G lengths I had which I have literally no other project in mind for but I still had a single three metre length in the house and three or four metre lengths in the box, so those are obviously the sides, and I can do the ends with some plywood bits and pieces and use some 1×3 scraps of deal to tie them together.

For rapidly knocking something like this out, that brad nailer is a bunch of fun. There’s glue providing the actual long-term strenght but a few 50mm brads act as temporary fixings and clamps all in one.

Then an offcut of poplar which was, to be honest, so scraggly that using it for anything proper would have meant a fair bit of work getting it straightened out, but for something that will live outside and be full of earth, this is grand. It acts as the base, and it was about 3″ too long so those 3″ get cut up into feet.

I didn’t have brads in any size bar 20mm and 50mm so I had nothing that really held the sides in place; the 20mm ones pinned them in position long enough to drive longer screws into the 1×3 battens though. Need to buy a few more lengths.

And that was it really. Very quick and dirty, handsaws and brad nailers and even the pillar drill with a fostner bit for the handles (along with a rasp, some sandpaper, a block plane, and some tidying up with a chisel). But it does the job and kept us at home, so that’s fine by me.

Filled with potting compost mixed with eggshells and coffee grounds, then transplanted our basil plants into it and watered with some liquid fertiliser.