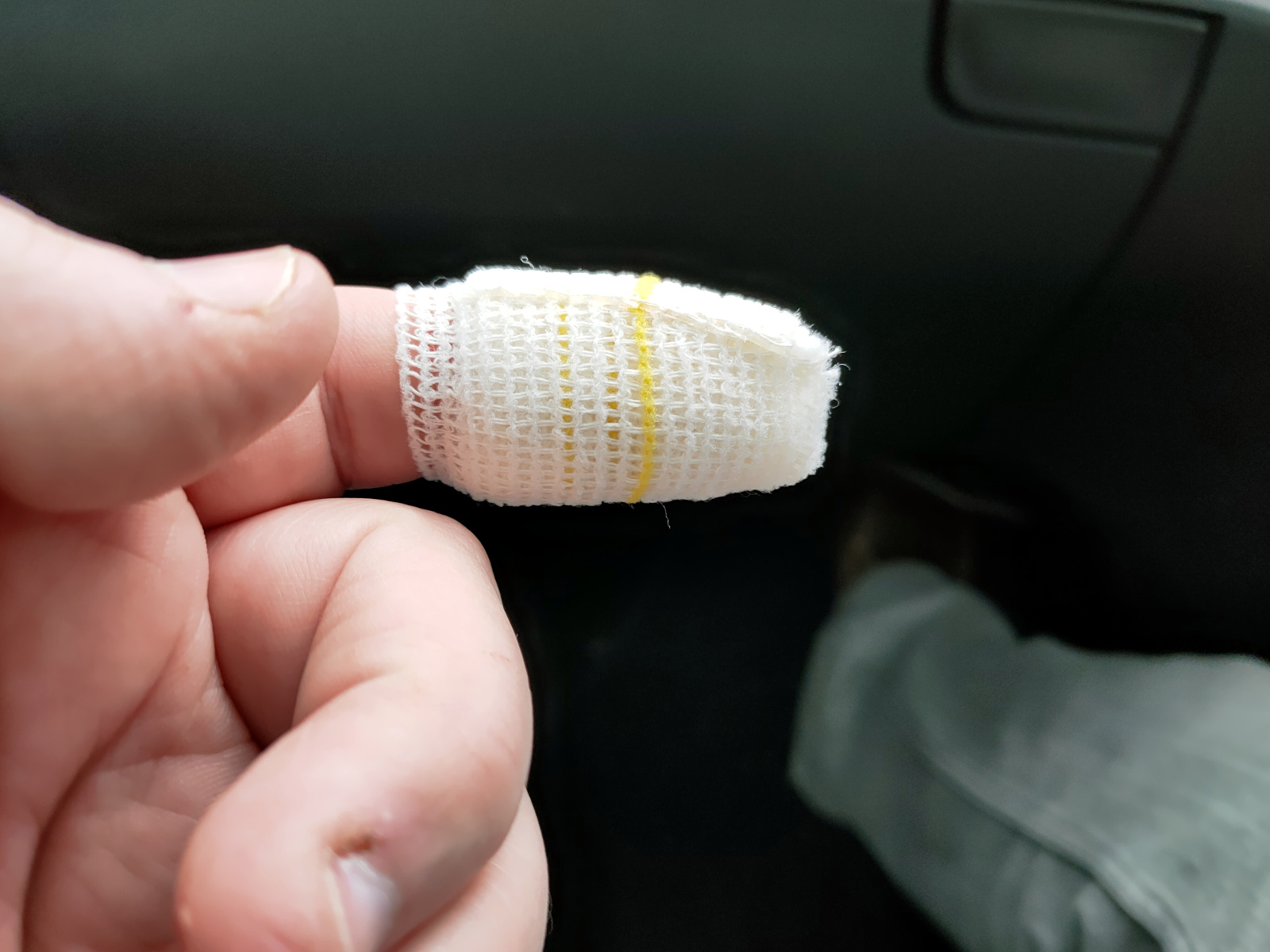 So there I am, making a quick cut on the bandsaw trying to do this:

And unlike what Steve did, moving his left hand out of the way of the blade really really early, I had mine still steadying the workpiece near the end of the cut while my right hand safely behind the blade pulled the work across.

And then the bandsaw blade jumped (turns out, not the best blade in the world) and popped out of the cut while making a loud bang noise, and I must have flinched, and my left index finger went into the blade for a split second. Owie.

TL;DR – no permanent damage, no nerve or ligament issues, four stitches and some restocking of the first aid kit needed. And a few lessons learned.

Some people are squeamish, so if you don’t want to see the photos of the cut and the stitching, don’t read any further!

So, the cut itself didn’t make it down below the subcutaneous layer I think – it’s 3-4mm deep at the lowest point:

Looks ragged, but it’s actually very clean, it’s just that the orientation of the hand when the blade hit meant that the blade was exiting the finger at the right hand side of the cut so it was cutting at an angle to that photo, not straight into the finger from that point of view. Downside of this is that the right end there is a loose flap. I’d applied pressure right from the time the cut happened (yay for having kitchen towel in the shed, boo for not having room for a wall-mounted box of dressings), and got it into a finger dressing pretty quick, about two minutes later. Got out the 3M steri-strips and prepped more dressings once the initial “stop dripping everywhere” part was handled, and then took off the initial dressing, checked by poking with the tip of the scissors that I had no loss of sensation and had movement, then cleaned off the cut and brought the edges together so Claire could bind it with the steri-strips, and then redressed it and phoned the local GP because it was going to need stitches. They weren’t available though, and then the pharmacist reminded me that we have a VHI Swiftcare clinic nearby and I booked an appointment with them and they cleaned the cut up, checked it over and stitched it up.

(It’s obviously all numbed up here, I’ve done the stitches-without-anesthetic thing before but I wouldn’t do it on a finger happily 😀 )
End result, four nice neat stitches, no permanent damage.

The other downside is no shed for a while.

Also, the blade is getting chucked out, it’s still covered in shavings of me.

And into the bin it went. Stitches come out in a week, then another week to fully close over hopefully.

Meanwhile the whole lessons learned should be obvious. Sketchy cuts are sketchy, don’t do them – hotglue the sodding piece to a sacrificial bit of scrap wood if you have to but don’t have fingers in the line of fire ever. Ironically, the thing I was most worried about was the round workpiece spinning and that didn’t happen, so the thing that gets you can often be the thing you don’t expect.

I foresee a lot more jigmaking in my future…

Oh, and buy decent bandsaw blades. I used to get mine from tuffsaws in the UK and had no issues ever, but brexit means Ian’s not shipping here anymore, and I’ve yet to find a suitable replacement.