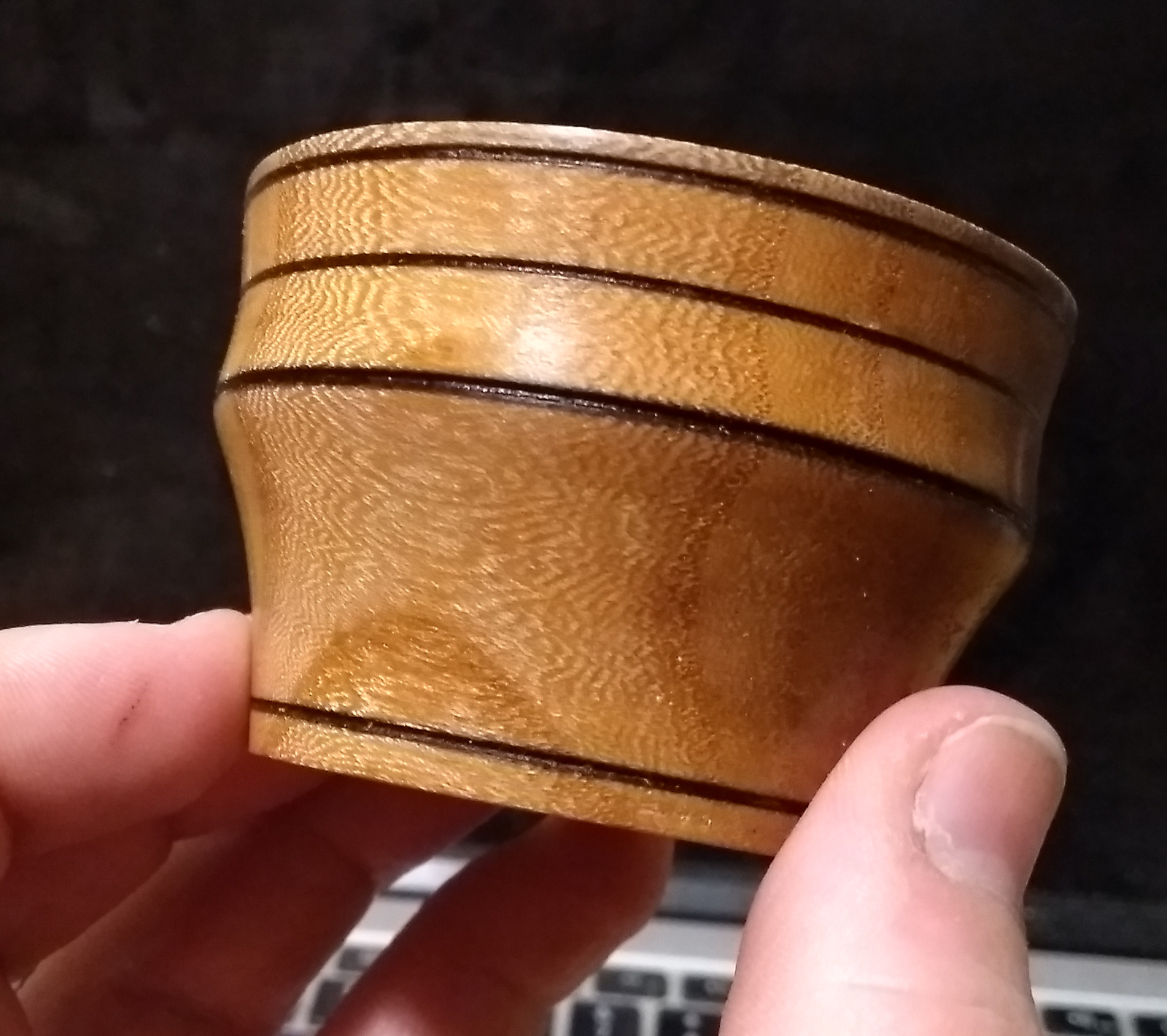 Just practicing at this stage. There are a few things I want to sort out in the shed like dust collection but I’m waiting on parts, and in the meantime I have some miniature blanks and a bit of practice is starting to make things a bit easier with turning (mainly because I’m not doing anything complicated).

Finally took the bait from all of Crimson guitar’s ads for isotunes and bought a set of the Pros (they’re half price at the moment because they’re now the Old Product 😀 ). Tried them in the shed tonight, have to admit, they do exactly what I wanted them to do; the air compressor can fire up at my feet and the noise doesn’t hurt my ears, and I can wear them with the faceshield easily and listen to music. Spendy by my standards – forty quid for a set of earplugs is twice what I paid for the J-29s which are the only bluetooth earbuds I own, I normally prefer wired headsets and earbuds. But these aren’t half bad.

A metal detector says that the tang from my diamond-point parting tool goes in about as far there as the end of that blank, and that tool length is a bit shorter than I’d like but it’s surprising how hard it is to find 300mm HSS blanks online – 200mm seems to be a standard length for making lathe tooling for metal lathes. Oh well. I also have some carbide inserts and bright mild steel bars in longer lengths coming to make some scrapers. I’ll have to laminate up some beech to make the handles, but I might use that to my advantage and cut a rectangular groove in the mating surfaces of the lamination so I don’t have to use an angle grinder to round over that square section to round for the tang.

3″x2″ blank for this evening’s practice. I tried using shorter screws in the faceplate because of how I’ve been having trouble getting rid of the screw holes in rims – this was as bad an idea as it sounds 😀 First catch and the thing ripped off the faceplate and jumped at the wall. So I swapped the jaws on the chuck for the larger size jaws and grabbed it with that.

Worked quite well. Oh, and I did something about the lighting as well…

It’s not fantastic, but I’ll get a sewing machine light or something soon and that’ll work better. It’ll do for now.

Turned a recess, cleaned up the base of that recess and added a decorative line or two on the base, and roughed out the outside shape. Then flipped it over, changed out the jaws on the chuck to the standard dovetail ones and grabbed the recess and started hollowing out the inside. Love that S-shaped rest by the way, it’s excellent for this.

Just great support when hollowing out the bowl, and when working on the outside shape as well.

That’s the LED strip clamped to the shelf for lighting the inside of the bowl there btw.

Without that, I can’t see inside the bowl when turning at night (by day it’s grand, the sunlight through the window is enough). I *know* I bought a small LED floodlight for the shed a few years ago for just such a thing, and I *know* it’s in the house with us right now, but do you think I could find it?

Need a better way to photograph these really. Did find something cheap on aliexpress for that, it should get here in a month or two 😀

Not horrible. Walls are getting thinner and more consistent, those are about 4-6mm thick throughout. Still getting toolmarks left over though. Need to work on that. And the finishing is very basic – tung oil, two coats of button shellac and then some briwax used as a friction polish. Some nice endgrain patterns there. Sycamore really is a lovely wood to turn.