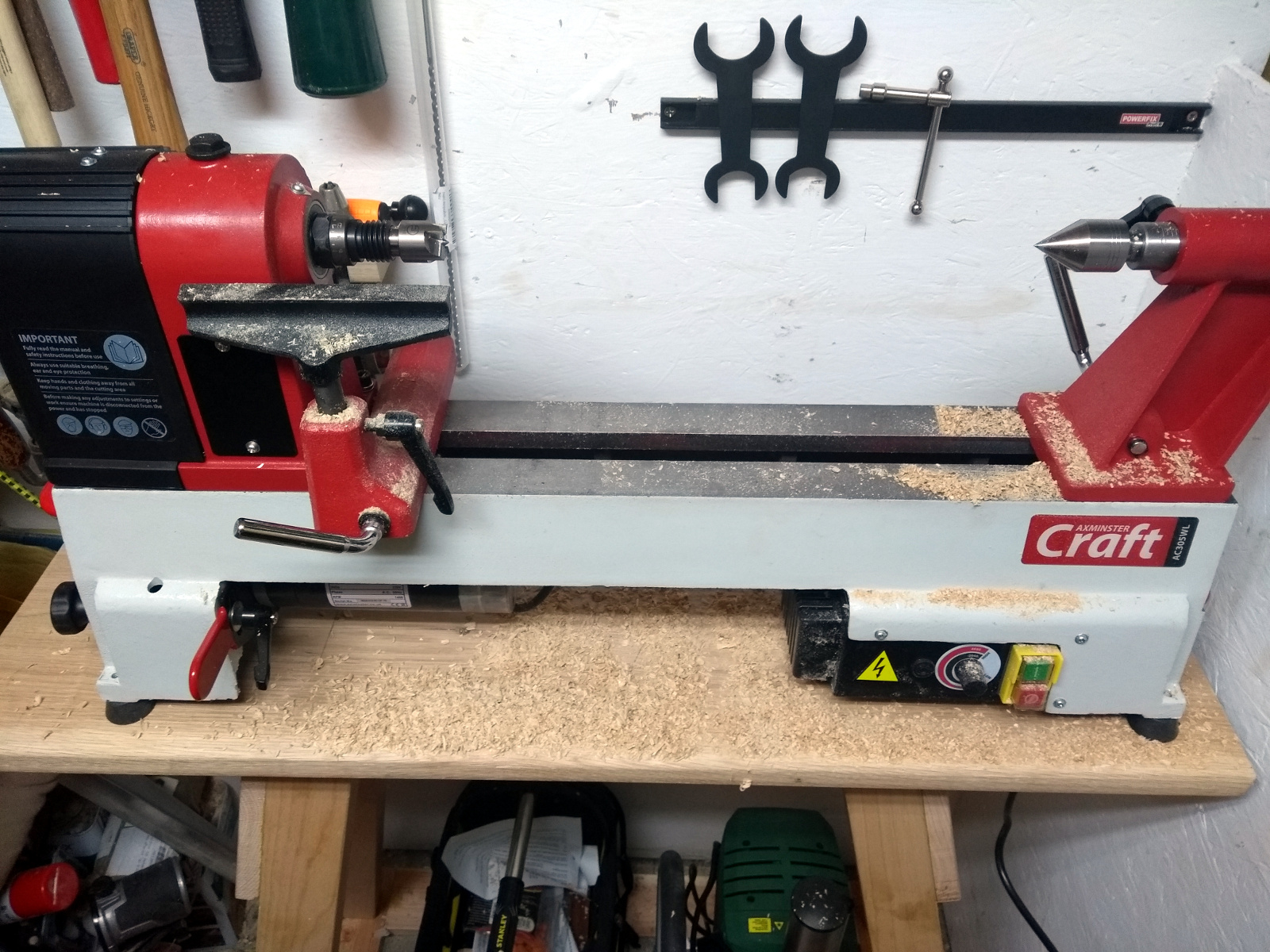 Simple 19mm pine footing for the lathe stand. Lap joints and glue at the corners. Got the feet as centered as I wanted them, then pencil around them and since the front two could overhang the bench safely, I could drill, countersink and screw up from beneath into the legs.

Then flipped it over onto the floor, and drilled, countersunk and screwed the other two. And that’s the stand complete, so at that point I stuck it outside for a few minutes during a break in the rain and moved stuff around and then wrestled it back inside.

The back corner is a tad close to the drills and such, but it turns out it’s just far enough away to be usable.

Yeah, that’s gonna take a while. I went through it today and anything that looked like I was hoarding wood got bandsawed into small pieces for the folks to burn. The 2×4 chunks are for turning practice, they’re going to go away in a hurry. The sheet stuff is getting hard to store, but the biggest challenge are those 12×30 ash and oak boards. I cut those to size to make some more of Richard Maguire’s coffee table designs and only ever made the one.

Could always make a few more I guess 😀

The pillar drill’s new storage spot works, which gives me that piece of the bench back at least.

And yes, the lathe does fit on the stand 🙂

It was a fair amount of fun getting that from the front of the house to the shed, and then Denis opened up with hail and rain right as I was unboxing it outside the shed to move it inside and onto the stand. That was fun.

I know it looks tight on the tailstock end there and it definitely is, but it does fit, you can get the tailstock off without smashing the window and you can wind the tailstock even without the handle sticking out the back (the record and coronet lathes we’re using in the course all just have a wheel with no handle, it’s grand, works fine).

And there’s enough space there to work with. Removing that tumbledrier has made a major difference 😀

And it fits! I bought this chuck off Rutlands in a black friday sale and it was demo kit, so it can stick winding it in and out – must take it apart later and see if that can be fixed – but it fits nicely on the spindle nose and I was half-afraid I’d have gotten some weird TPI and would need an adapter.

And it came with a screw center in case I want to be lazy 😀
Think I’m going to want to get a slightly longer tool rest at some stage mind.

Live center fits as well. I mean, that came with it, but I figured I’d check just in case 😀 It’d be just my luck for the 1MT and 2MT live centers to get mixed up in the box and me get stuck with the wrong size 😀

That back wall will need a bit more work. I want to put up some dust collection there (gonna need to run some more 4″ pipe for that and also sort out the power cabling better). I don’t think that wall is going to get hit with a lot of chips in normal use, so it might be safe to leave small tools up there or a small shelf for chucks and faceplates and the like, though reaching across the lathe isn’t exactly the best of ideas. But, 8×12 shed, so I could stand on the far side and still be in a hazard area anyway 😀

And there’s now just enough room between door and lathe stand to put up two of these, stick a 9″ wide board on top and embed the diamond stones in there so I’ll finally have a dedicated (albeit fold-down) sharpening station for the chisels and stuff 😀

Ironically, sharpening the lathe tools will need something completely different that will probably have to live on a french cleat most of the time and on the bench when in use. Oh well.

Anyway, couldn’t put the lathe in and not test it…

It works! 😀 First chips! And soooooo many of them….

Had a small offcut of oak so it was this or burn it. And as tests go, it was useful because I learned a few things. It showed where most of the chips go…

Everywhere, basically. Though not much against the back wall, which is useful. That’s not where the tool tote is going to live btw, I just had to stash it somewhere temporarily. Also, the extractor can just about reach to the lathe at the moment so cleanup was fairly painless.

The other thing, and this was odd, was that there wasn’t any vibration. The lathe didn’t vibrate on the stand and the stand didn’t vibrate around the place.  I mean, it’s a mini-lathe and it was spindle turning, but still, it was kiln-dried oak, not green lime. I expected some vibration, but it was solid as a rock. I need to mount the lathe to the stand for certain, and I need to find some hard rubber washers to go between lathe and stand, but I’m going to hold off on screwing the stand to the floor for now. May need to do this when turning bowls, but for now it looks like we’re okay.

Another thing I need to do is to start printing off some fittings for the extractor – I’ve been having issues with the extruder nozzle on the 3D printer completely jamming up and splooging everywhere this week. It looks like it was a mix of too low a hot end temperature (so the filament wasn’t as fully plasticised as you’d like causing more back pressure) and the PTFE tube on the printer being a bit damaged…

And the end wasn’t square-cut either. So I upped the temperature in the slicer settings and got a replacement tube and fitted that.

And that worked reasonably well.

No spaghetti, just parts. But now I need to look to the dimensioning because those parts all came out the wrong size…

That should sit down more over the bearing but nope. I have a few things to print off for the printer for things like stabilising that Z-axis screw and a better filament guide and so on, but they’ll have ball bearings as component parts (I’ve a bag of those sitting there at the moment) and if they’re not coming out at the right dimension, then the bearings won’t fit and it’ll just be a waste of plastic, like the dial indicator stand which left the dial indicator swivel freely instead of holding it.