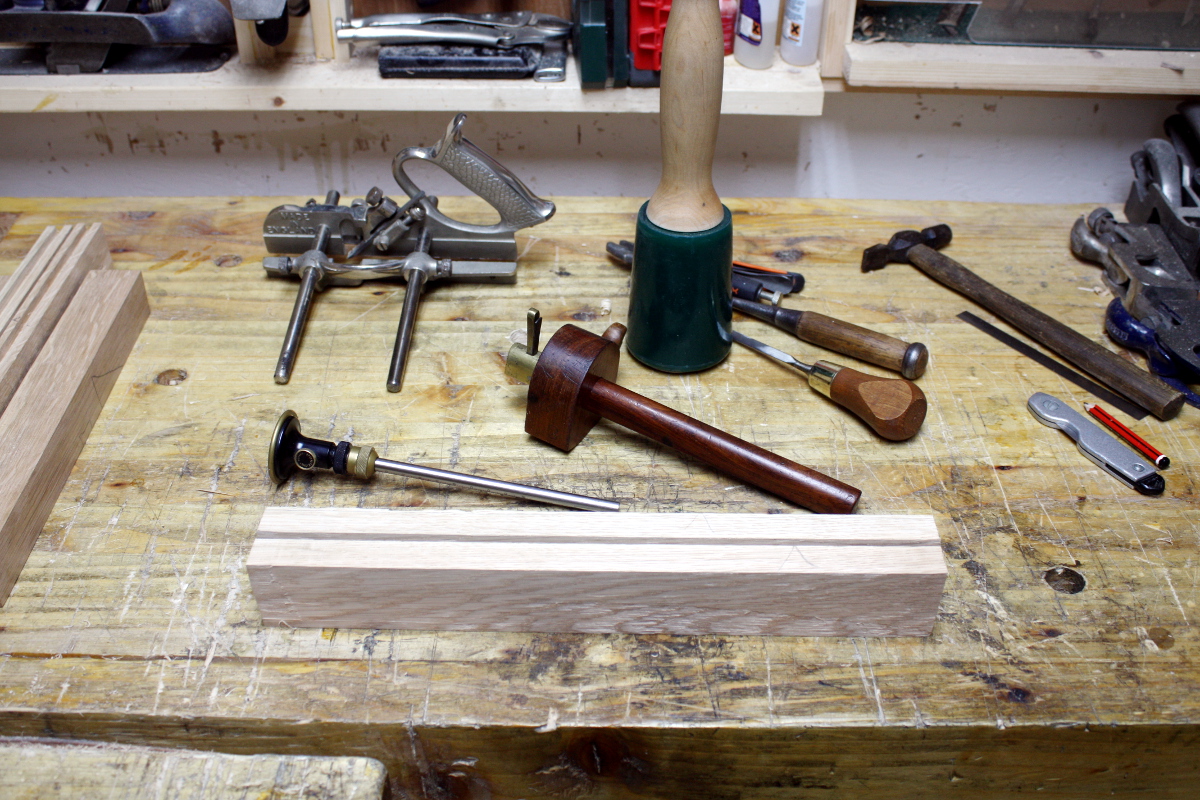 The rails were all prepped and squared last night so today at lunch I hobbled out to the shed and started grooving them with the #044. 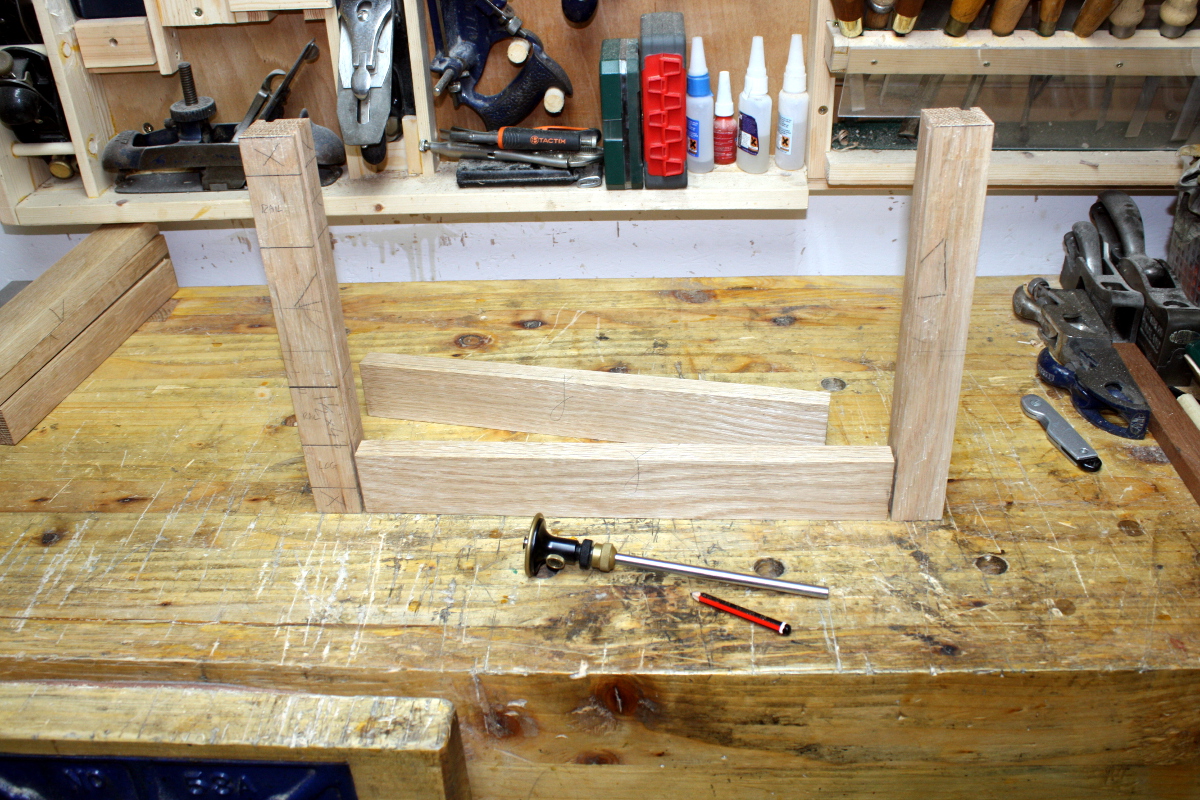 First off, checking the position of the groove and the shadow lines (if we have any) with the long rails. 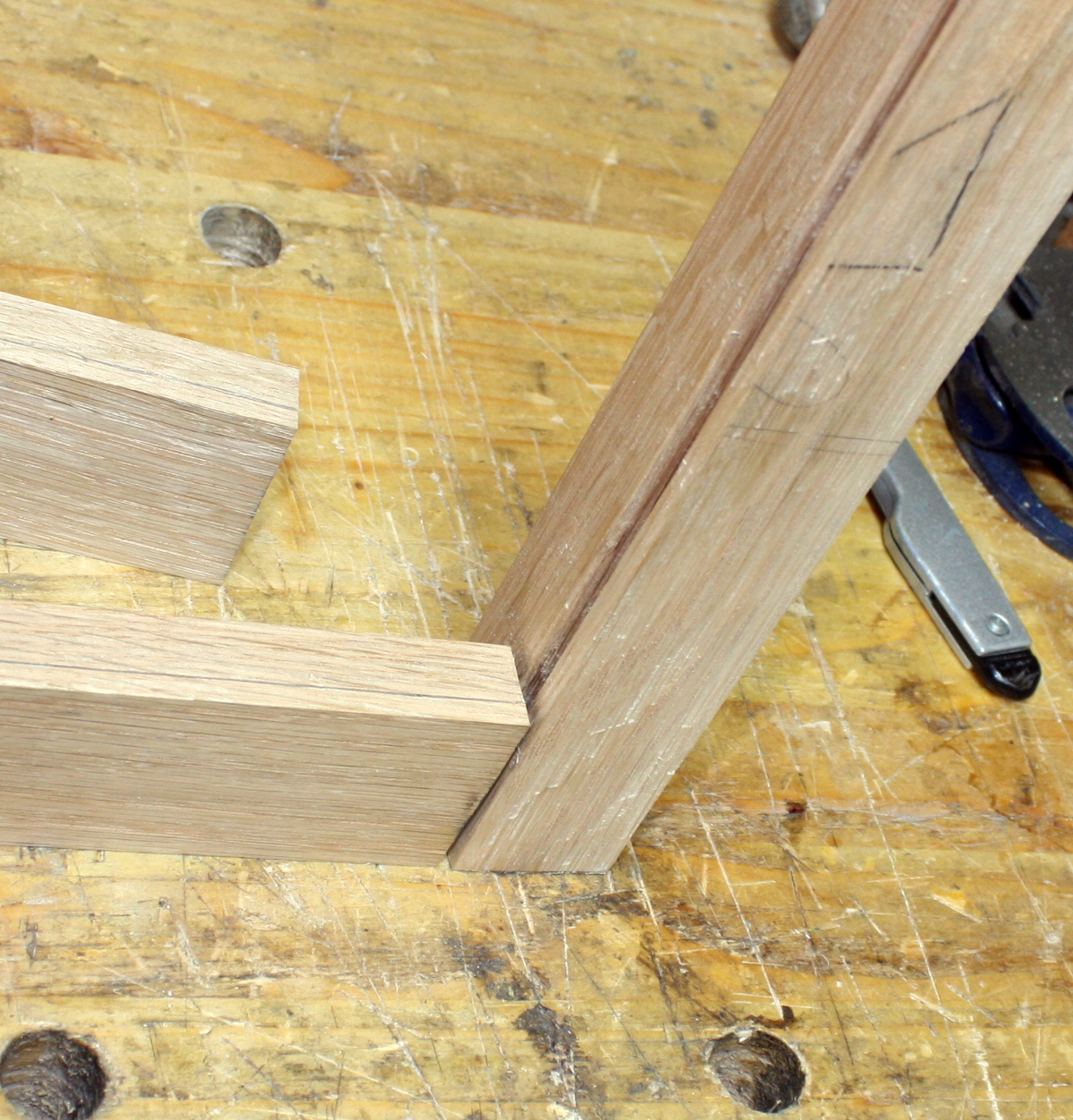 Line up the reference face of the rail with the stile and nick the corner with the marking knife at the edges of the groove on the stile. Then use the marking gauge to run those lines around three of the four edges and reinforcing the lines on the edge with the groove using the cutting gauge. Then into the vice and plough the groove out with the #044. 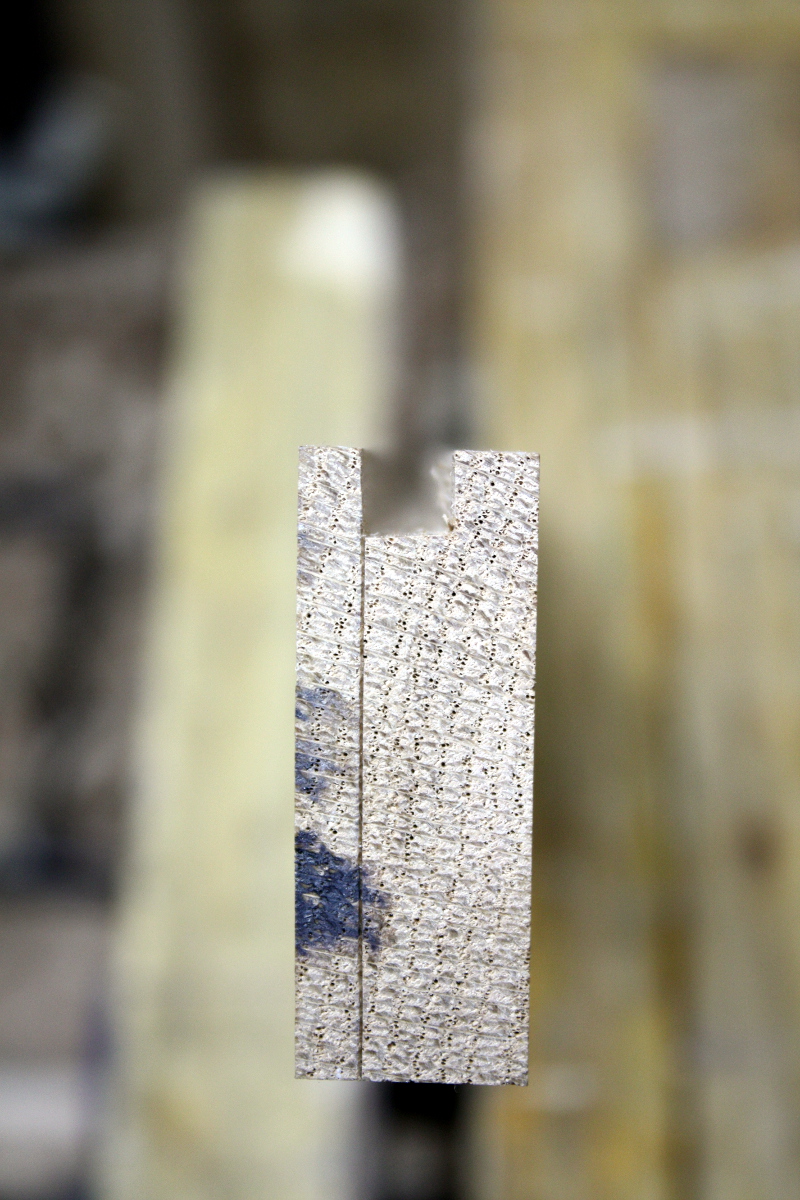 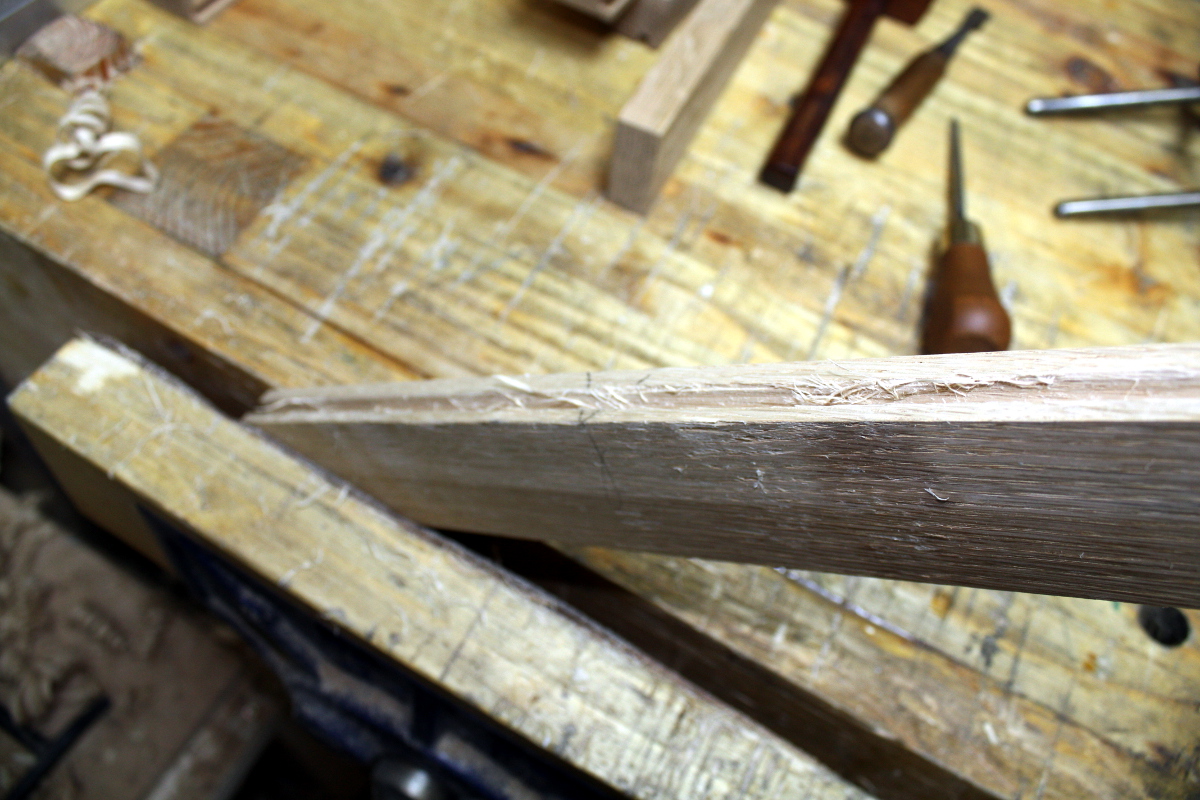 But the inside edge is a bit rounded and ragged which could cause issues, so out with the japanese chisel (which I’m starting to enjoy using – it’s great for anything involving chopping but for paring it leaves a lot to be desired) and the narex to clean up. 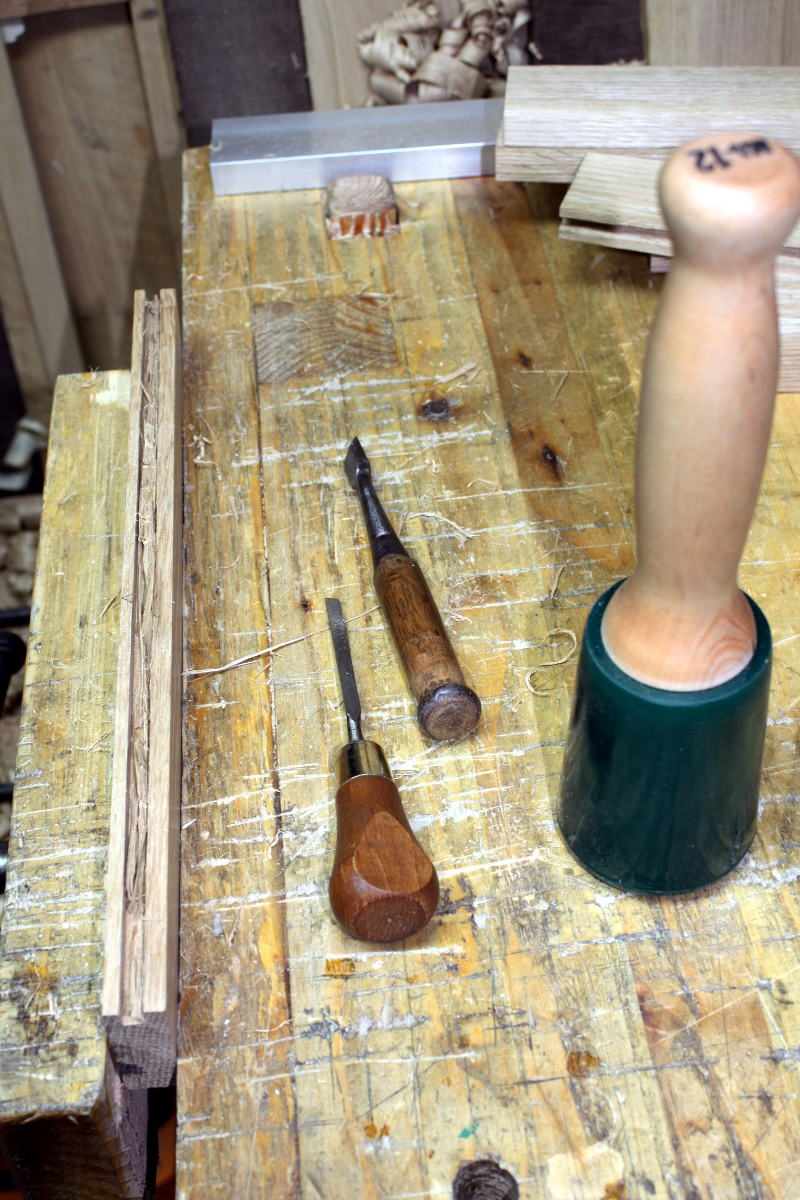 And when the straggly bits on the bottom are cleared out and the inside edge is straightened up, a single pass with the #04 along the top to tidy up and we’re done. 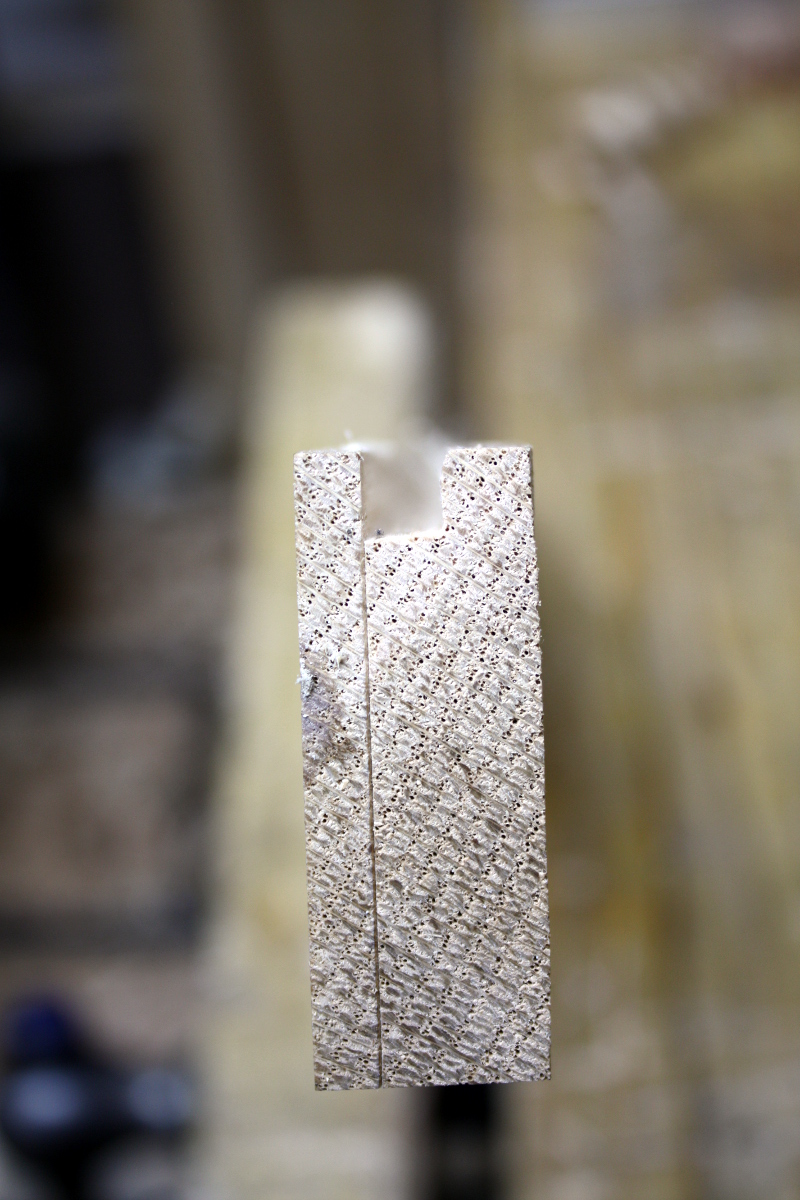 Not every rail needed quite so much work (and I went back and fixed two grooves on the stiles the same way later). And with the long rails done… 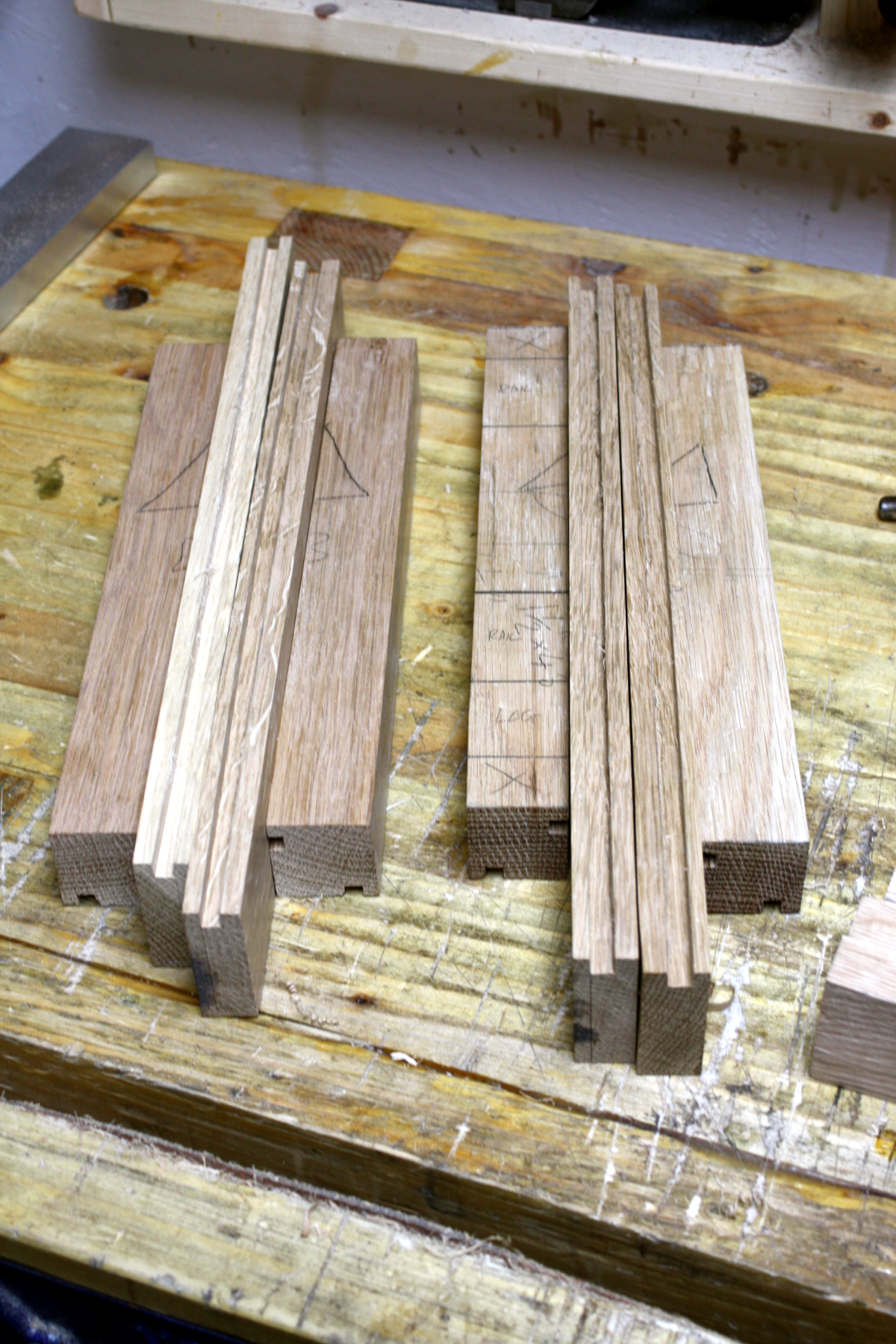 …time for the short rails.

Same procedure as before, right down to the cleanup. By this point we’re through lunch, and a coffee break around four, and into afterdinner time, but: 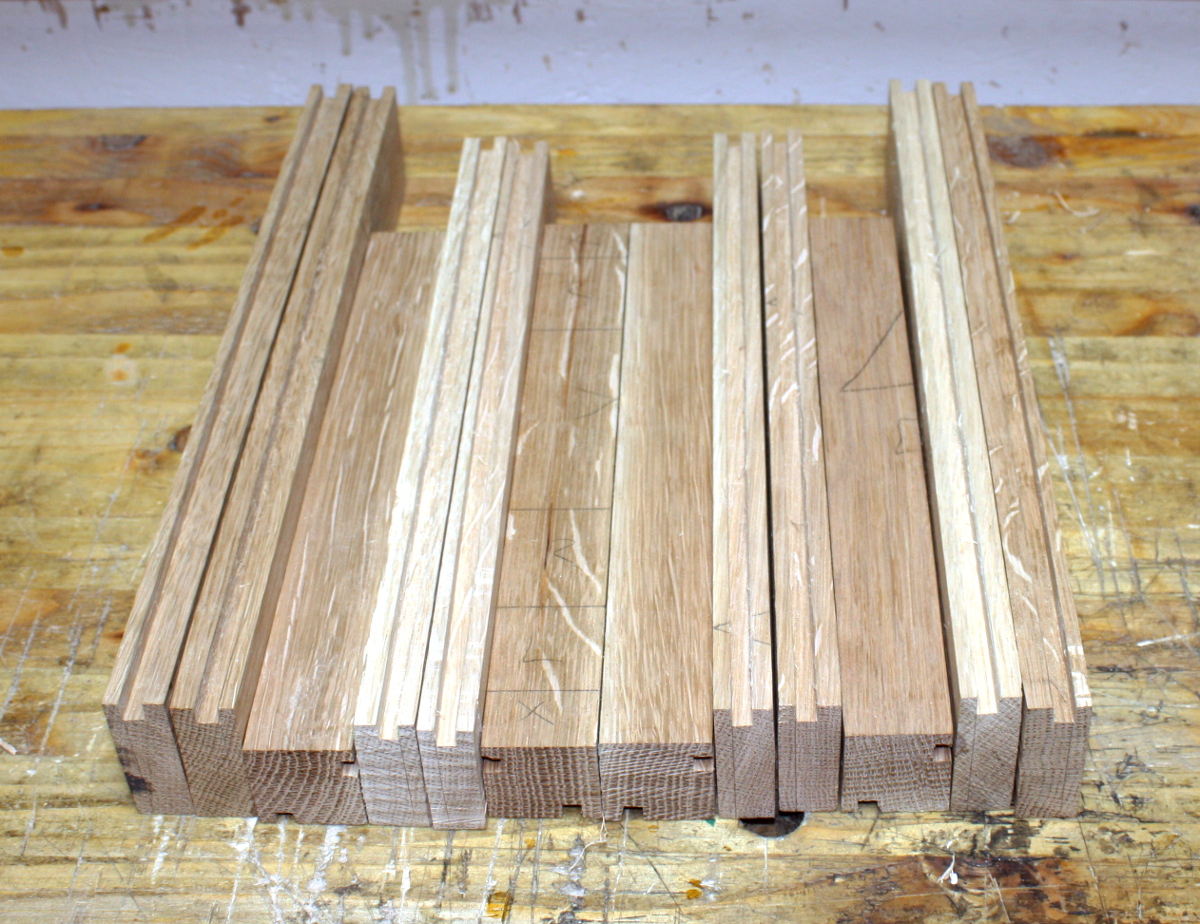 Done. That’s the main carcass of the chest ready for the mortice&tenon joinery. But by now it’s too late to start chopping mortices (because of the noise and the neighbours) so something else needed doing. I still hadn’t picked material for the lid so I started picking through the timber store and found two short oak boards that are already prepped from an earlier build I didn’t pursue, they’ll do for the frame of the lid. For the lid panel I wanted a single solid piece of nice looking oak between three-quarters and an inch thick. Couldn’t find any offcuts, so… 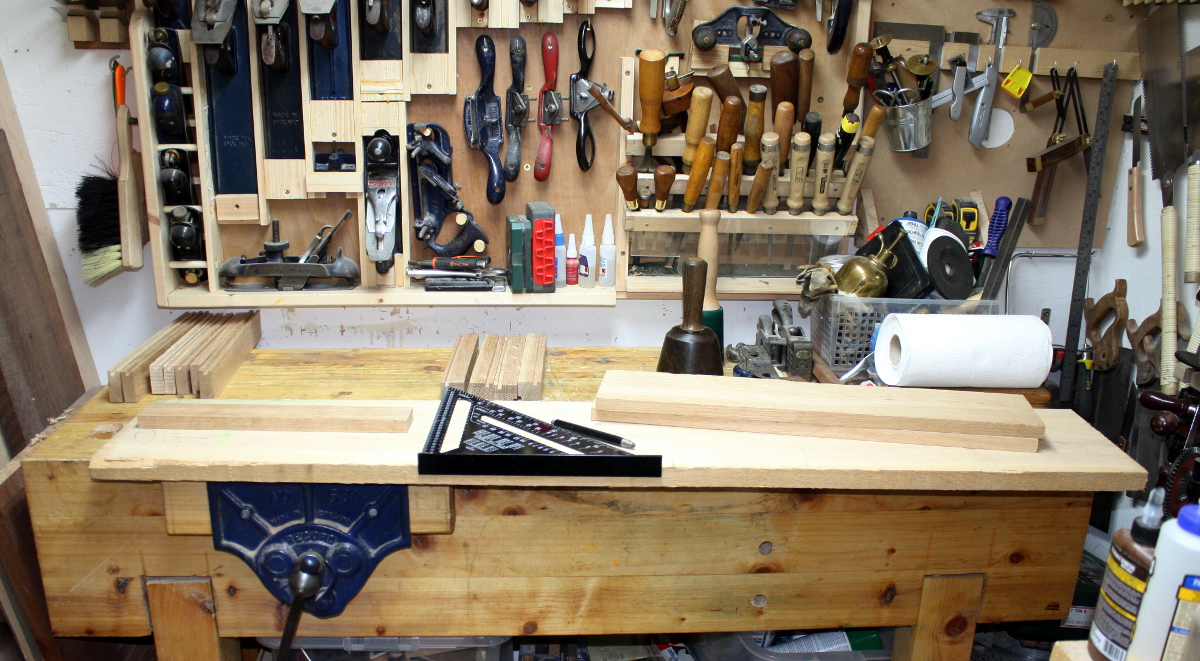 Measured off slightly more than I’ll need and crosscut with the 300mm ryoba in the face vice, then skim-planed off both faces to see which side should be up. Sometimes that’s a hard choice. This time… not so much 😀

Three guesses which way’s up? 😀

Also, it lets me use up the end of that board that had a damaged edge – I won’t need the full width of the board for this. The idea is to have a frame-and-panel lid, but where the lid has a groove around the edge instead of a tongue so that the bottom edge of the groove acts as the tongue for the frame and the top edge of the groove is proud of the frame: 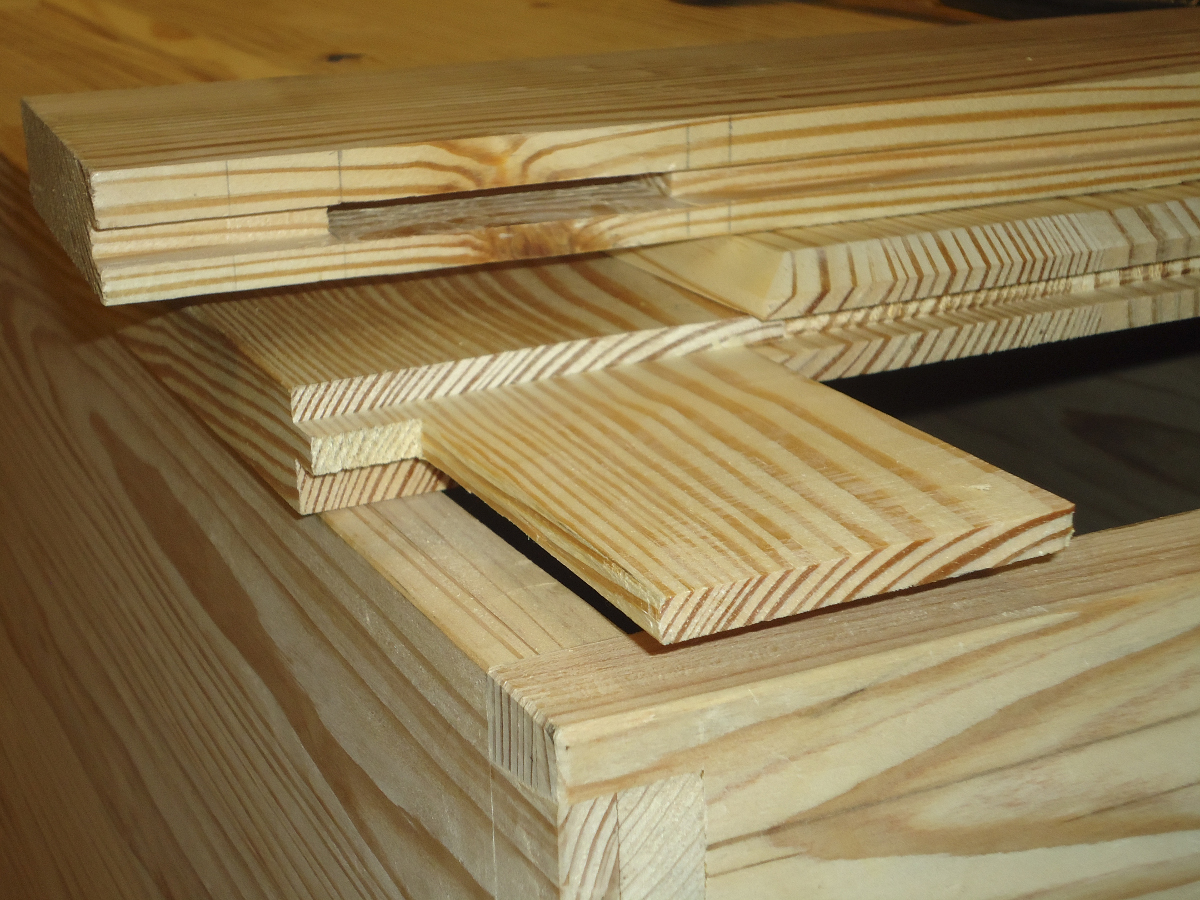 Of course, you don’t really need the groove on the frame, you could use a simple rabbet. I’ll have to think about that a bit. The panel does have to be grooved though, because I want to shape the half-inch or so that would be proud of the frame and I’d like to be sure the line between lid frame and lid panel is hidden away.

With the parts skim planed and set out (I’ll rip out the frame rails and stiles tomorrow), and the floorboards already picked out (I have some cedar for that), there was something I wanted to check, namely whether parts in the vice are definitely at right angles to the workbench top; that would explain the slight angle on the base of the 044’s grooves. 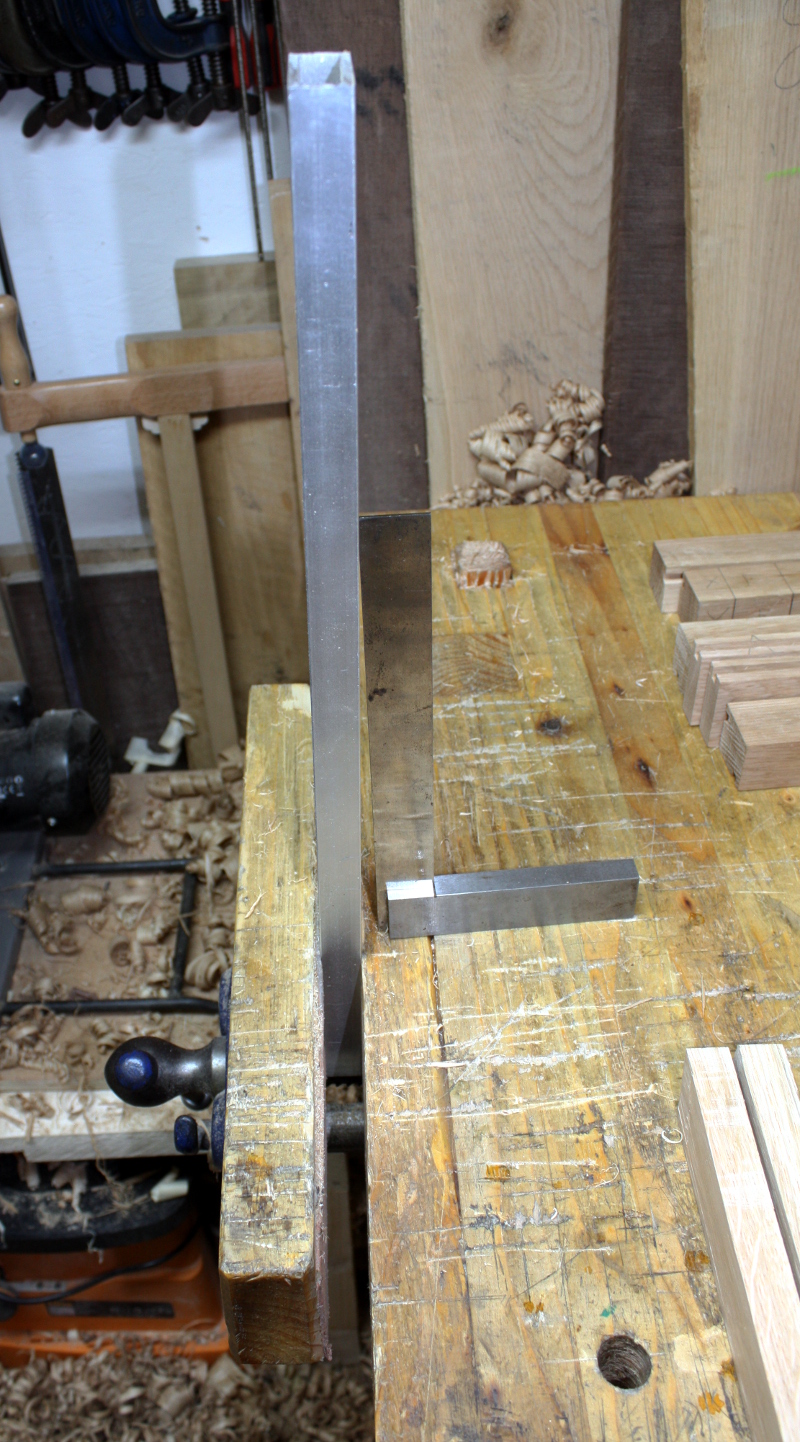 Nope, not even very close. That’s a tad disconcerting. I wanted to see if it was the vice jaw or the apron… 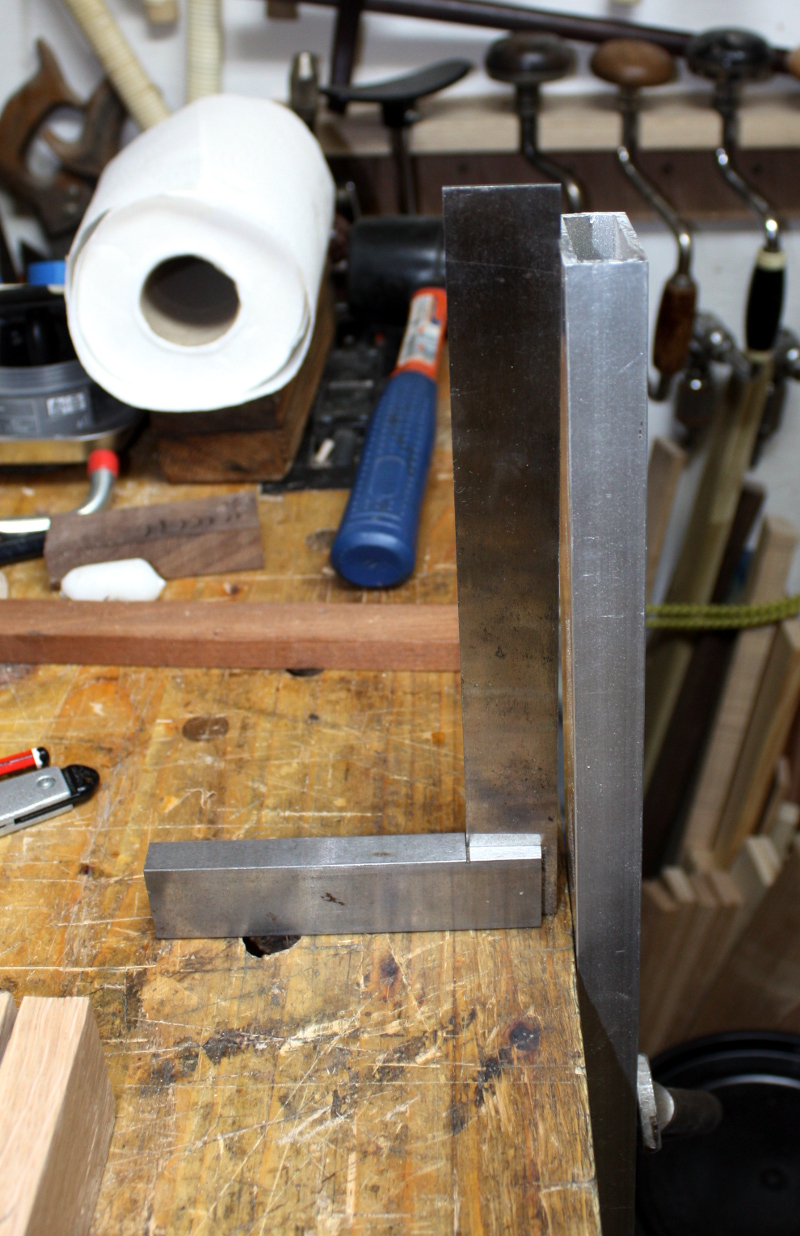 Seems like it’s both. Well, I guess I can’t think of the corner of the workbench as a square anymore. I suppose it’s not bad for cheap 2×4 material, but I do see the attraction of hardwood benches now.

That done, I laid out tomorrow’s job, wrapped up for the night and hobbled back indoors. 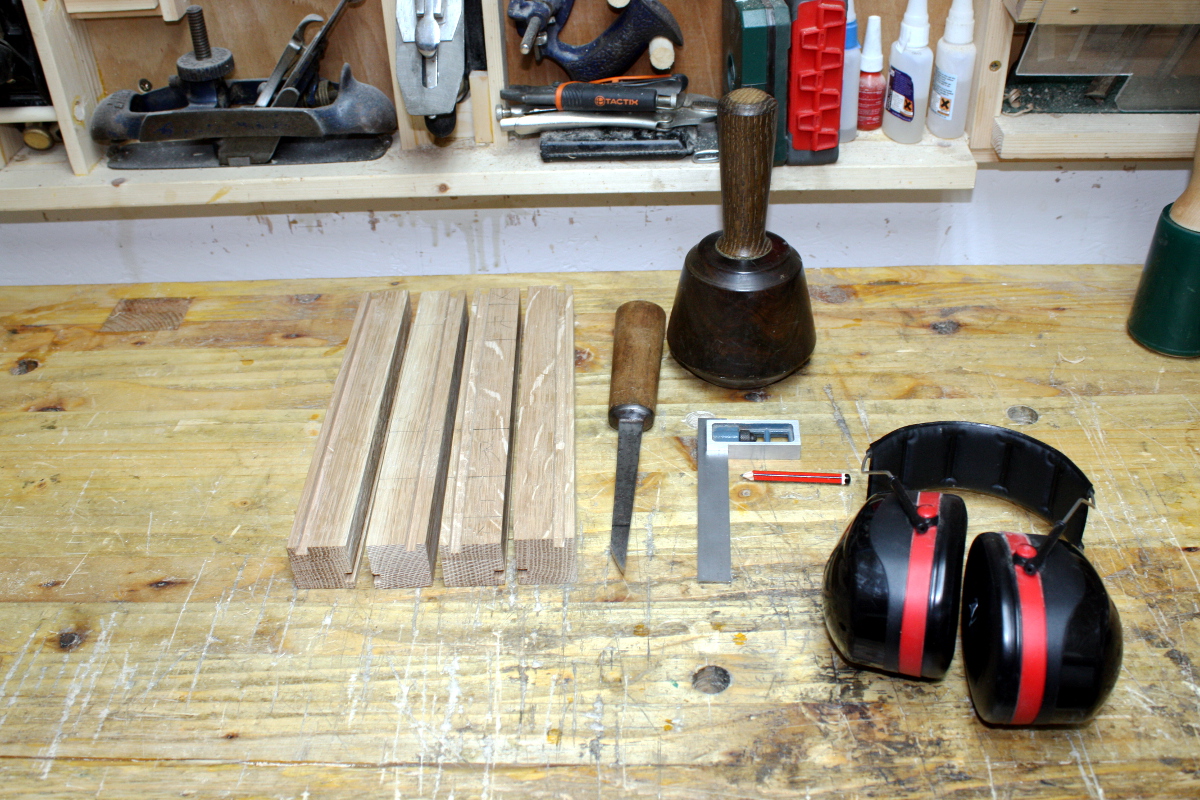