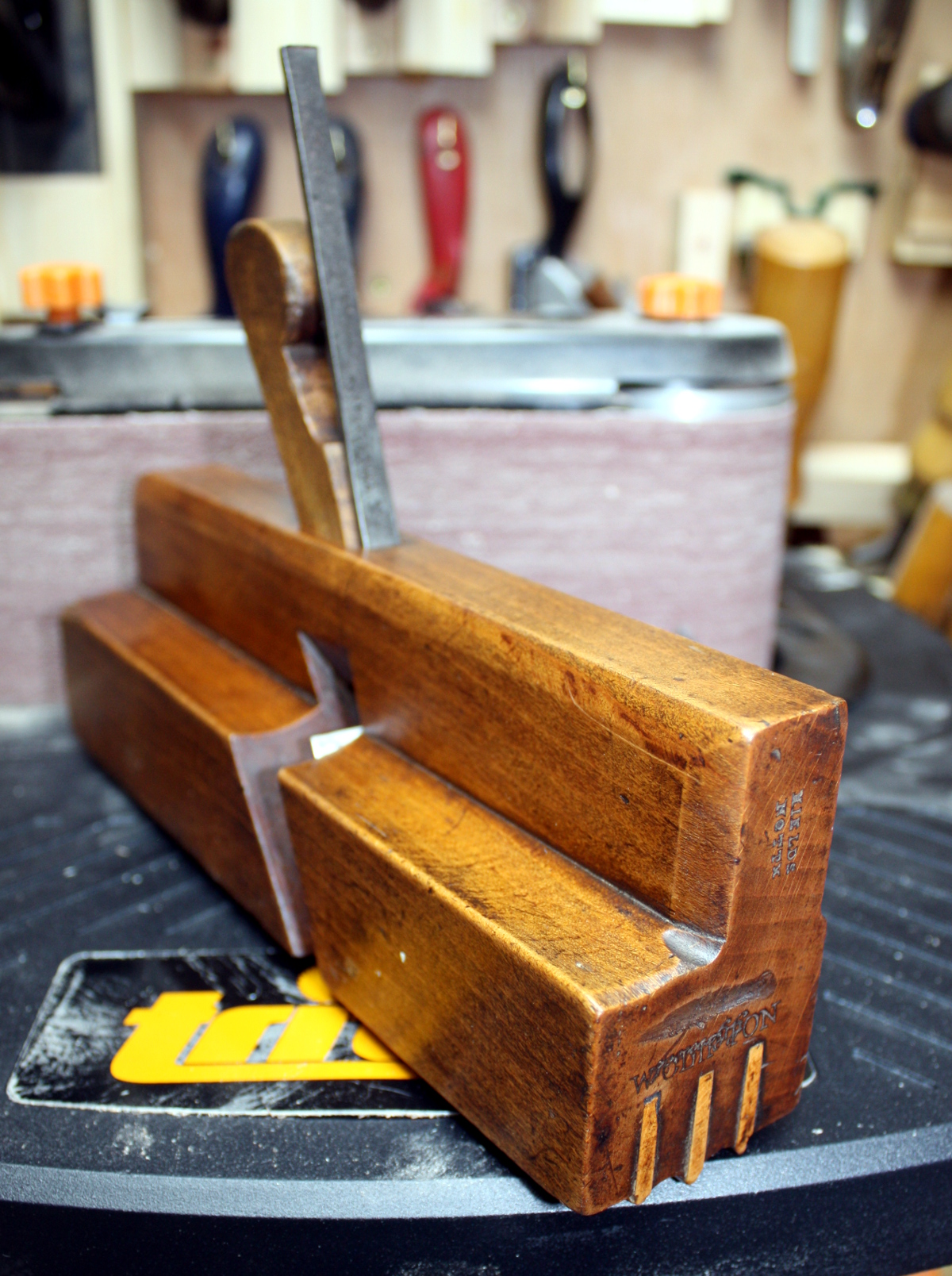 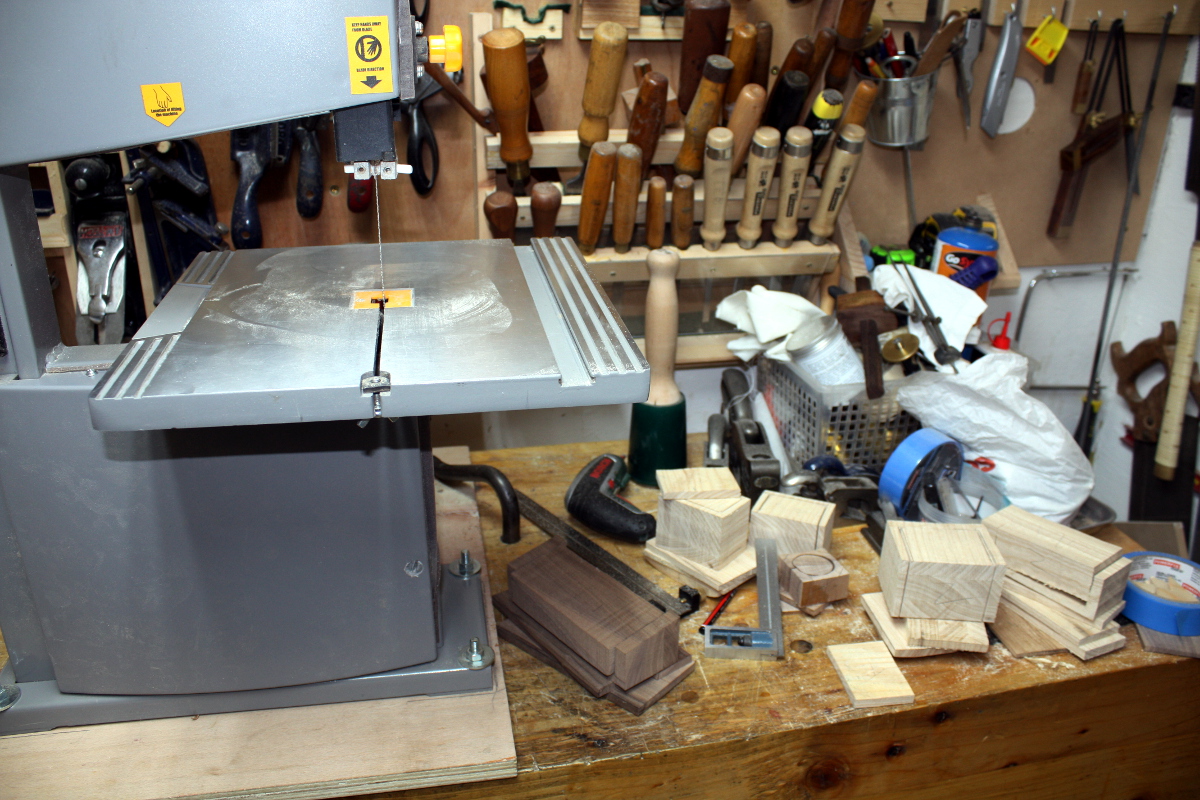 Started with some bandsaw time. Ripped the bottom part of the cupboard to width and set that to one side, then took all the bandsaw box blanks and cut those. By the time I was done, it was time to pick up junior from his last day of school for the year. Then it was time to sand… 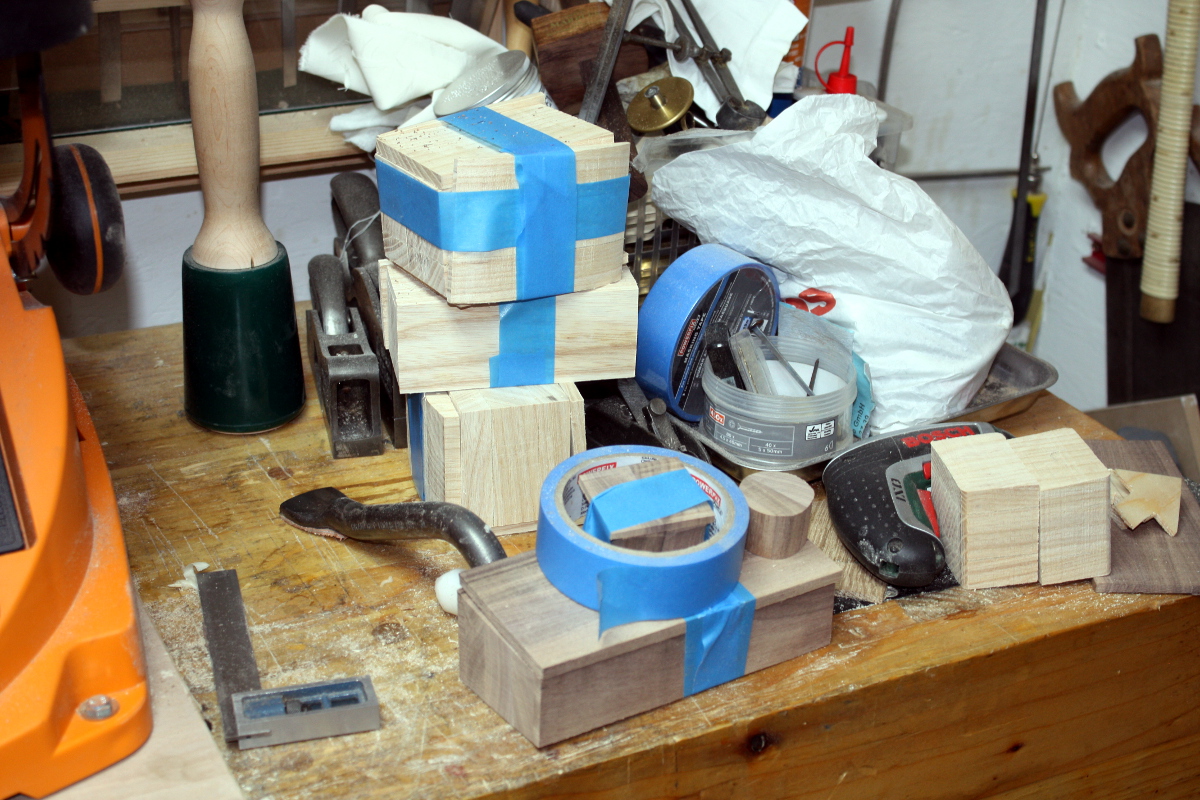 Only 80 grit so the dust wasn’t so bad and that’s the bulk of both the bandsaw mark removal and the initial shaping done. There will be more sanding to come though. However by now it was time for (a) lunch and (b) a trip to the post office and then into the Big Schmoke (Dublin for the non-Irish readers) to meet up with a friend who’s a wood turner (along with a few other things, hi Tom!) to pick up a commission which will be an xmas gift. Photos to follow, it’s a lovely piece of work but super top secret squirrel for now.

Then back to sanding. 120 grit this time to get the initial finish and refine some shaping. 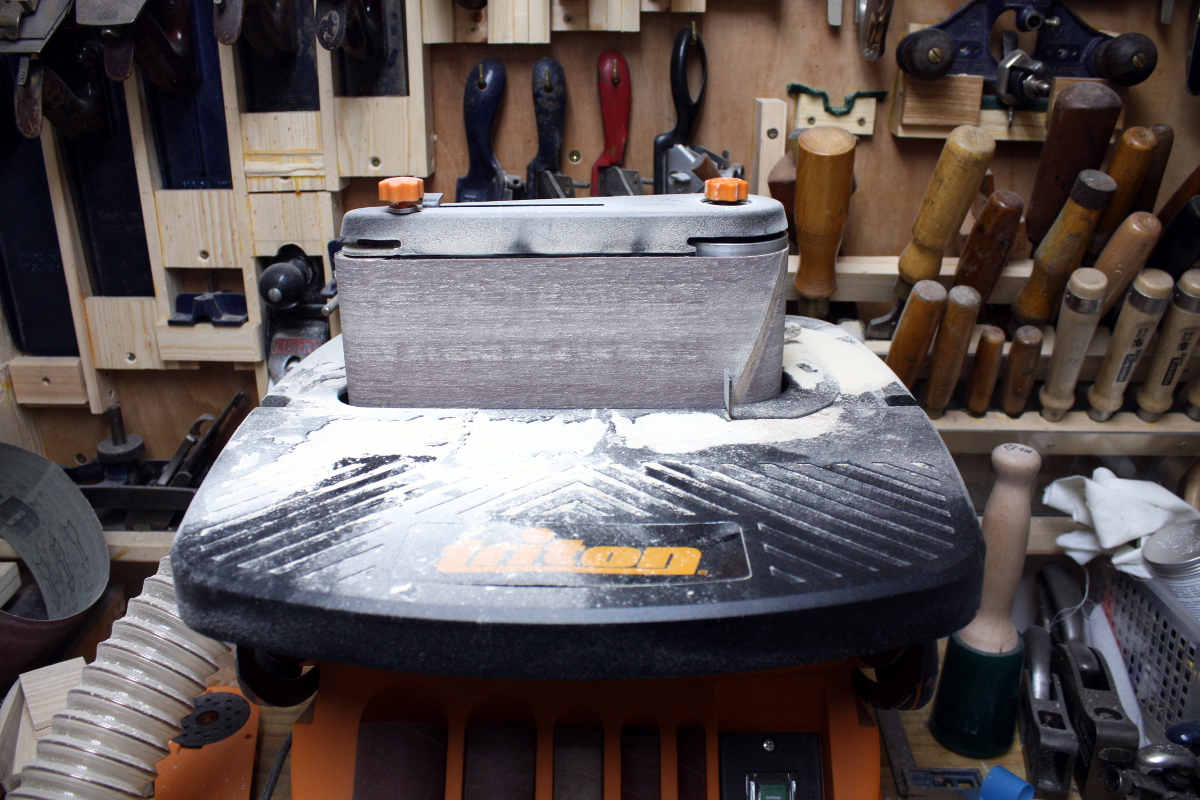 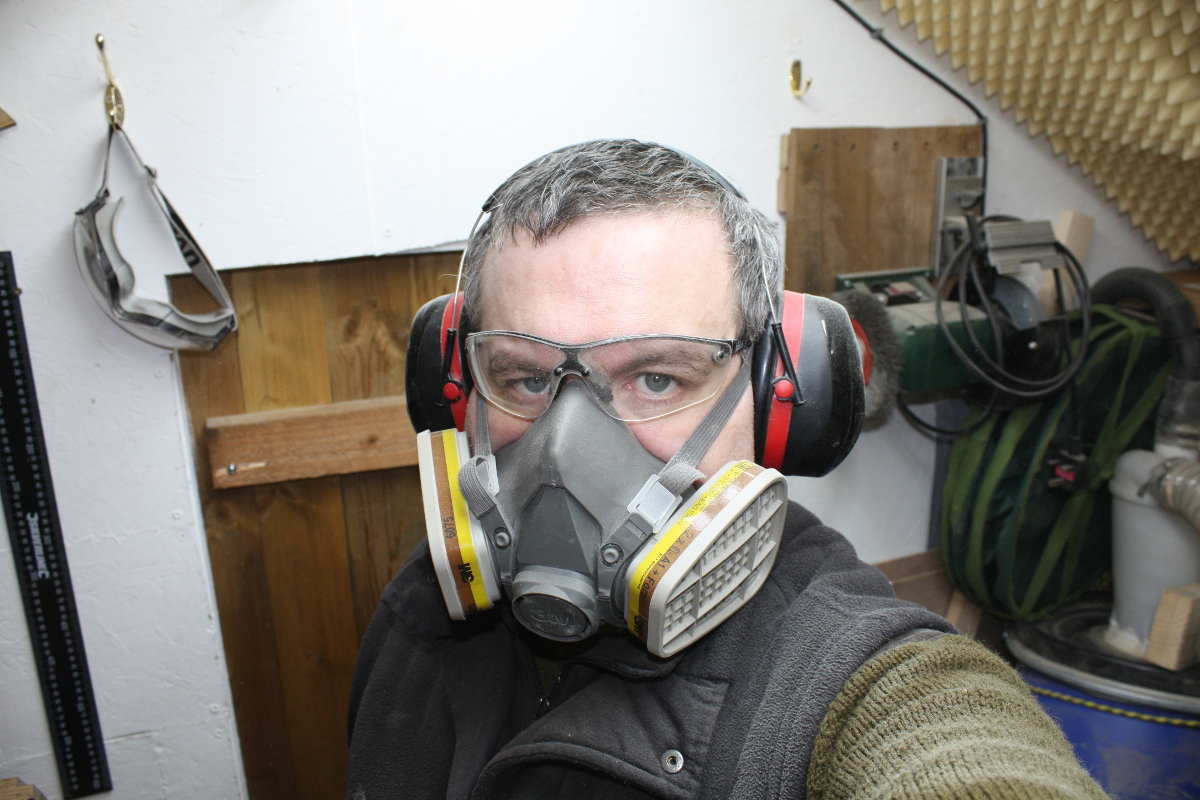 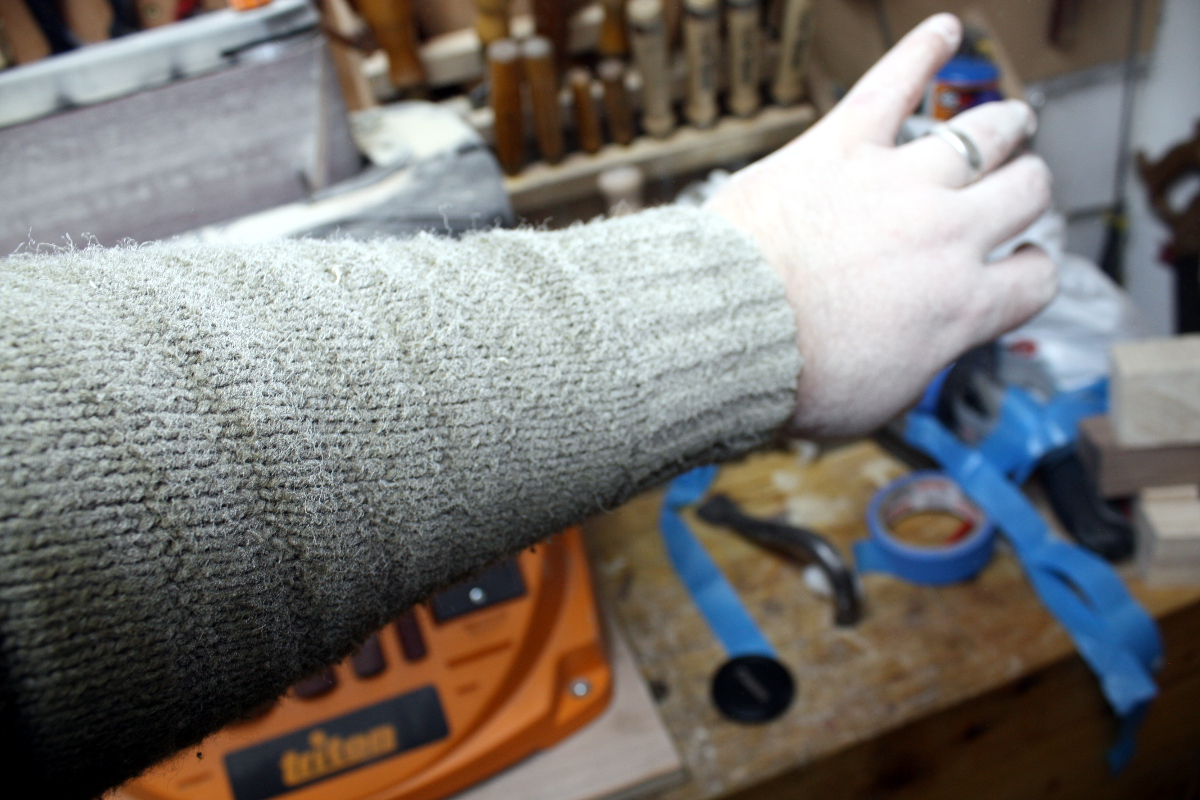 This is not my favourite part of this process. It’s dusty. That’s a green jumper, not an artisanal bleached thing. And that’s with the dust extraction running but I suspect an adapter isn’t correctly sized. Some ebaying to do to fix that one properly (I can’t just duct tape it because the hose is constantly swapped between bandsaw and sander). But the boxes came through okay and one or two might be nice.

Set of six complete (and wound up in immediate use so yay).

A #4 round. I was looking at the whole hollow and round set thing and most of the experts on this agree that you should start off with four – one hollow and round each in two sizes. Those sizes depend on the size of the furniture you build, and for me, 4s and 6s should be the most useful, with occasional excursions to 2s and 8s. These things aren’t that expensive if you buy second hand and not in matched pairs, which obviously isn’t the best but frankly I don’t have room for any of this anyway so I’m not quite willing to throw a thousand quid at a half-set when forty will get me the ones that’ll do 80% of the work. And complex mouldings can wait for a while. Beading planes would be nice, I can think of a few places I’d use those, but I do have a few ways to make beads at the moment between the #055C and the scratch stock. But if I see something nice on ebay I might jump for it. And snipe bills might be handy too, but again, when they come up on ebay. That’s the plan anyway. I did have one exception from that plan which arrived today, the new record-setter for “oldest tool in the shed”: 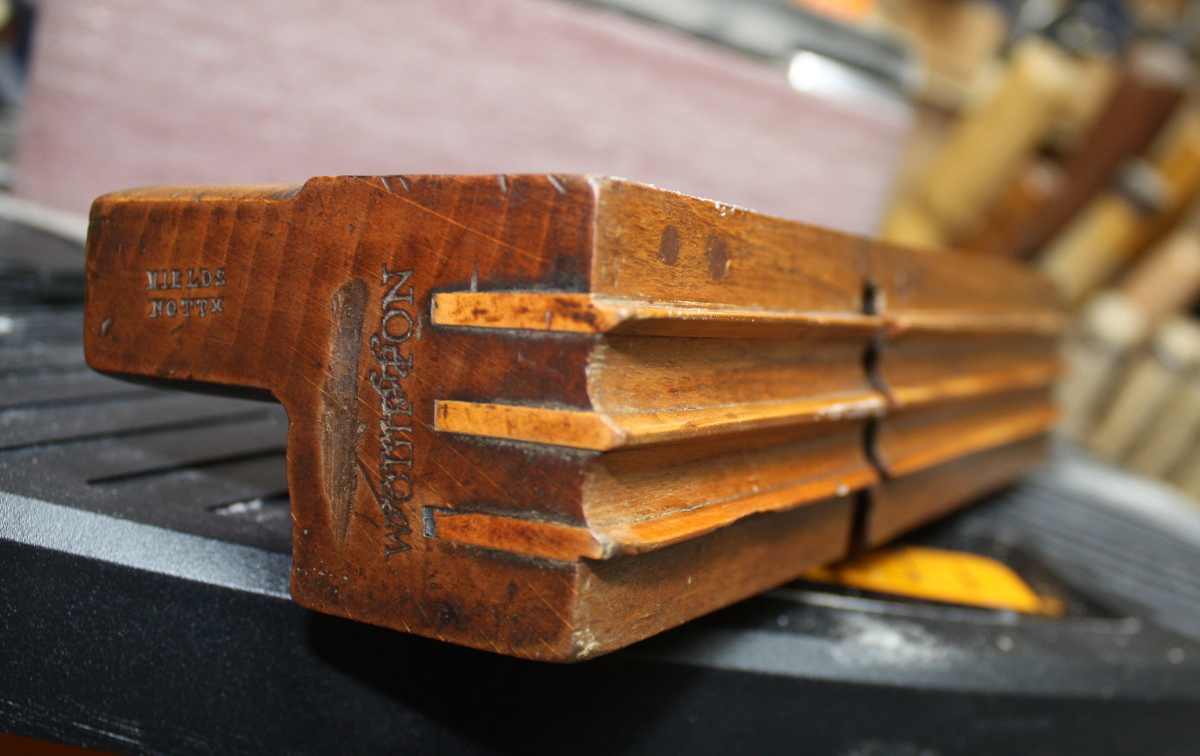 It’s a reeding plane (ie. two beads side by side which lets you cut an infinite array of beads for decorative effects). Triple boxed no less (those light-coloured insets are boxwood, which is much harder wearing than the beech of the main body). Which might explain why it’s still in usable condition even though it dates from somewhere in or around 1850.

And it was twenty pounds sterling.

I guess antiques just aren’t valued all that highly…

Anyway, on with the work. 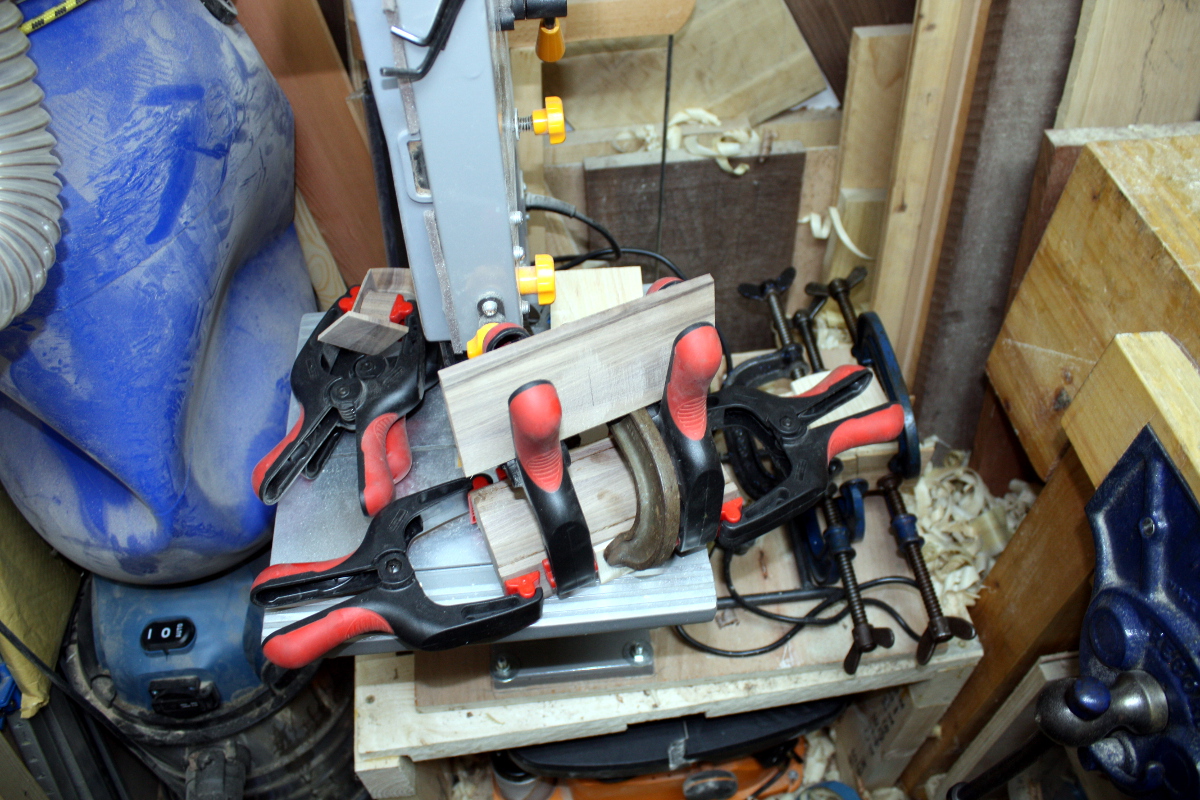 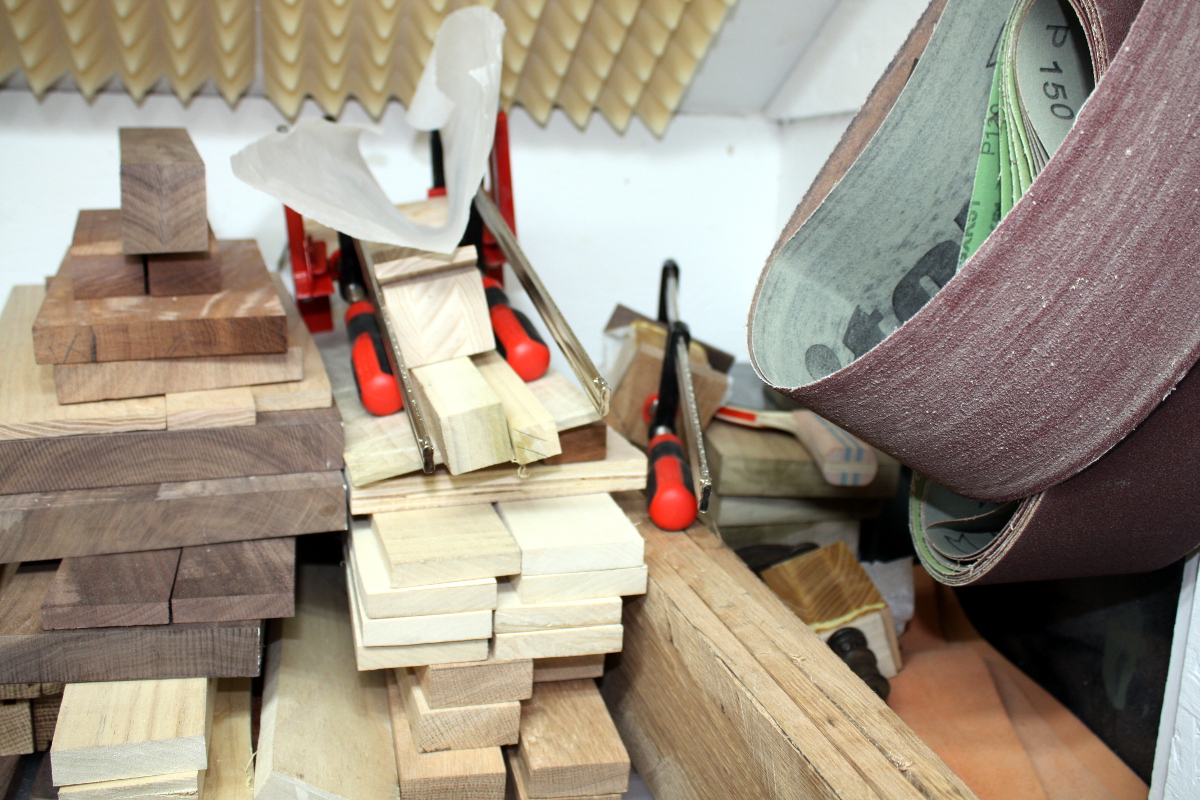 Awkward finicky glue-ups for the bandsaw boxes (one of many glue-up stages because a few of these have awkward build processes due to my bandsaw having a silly small depth-of cut limit of 75mm).

And then time for dovetails. 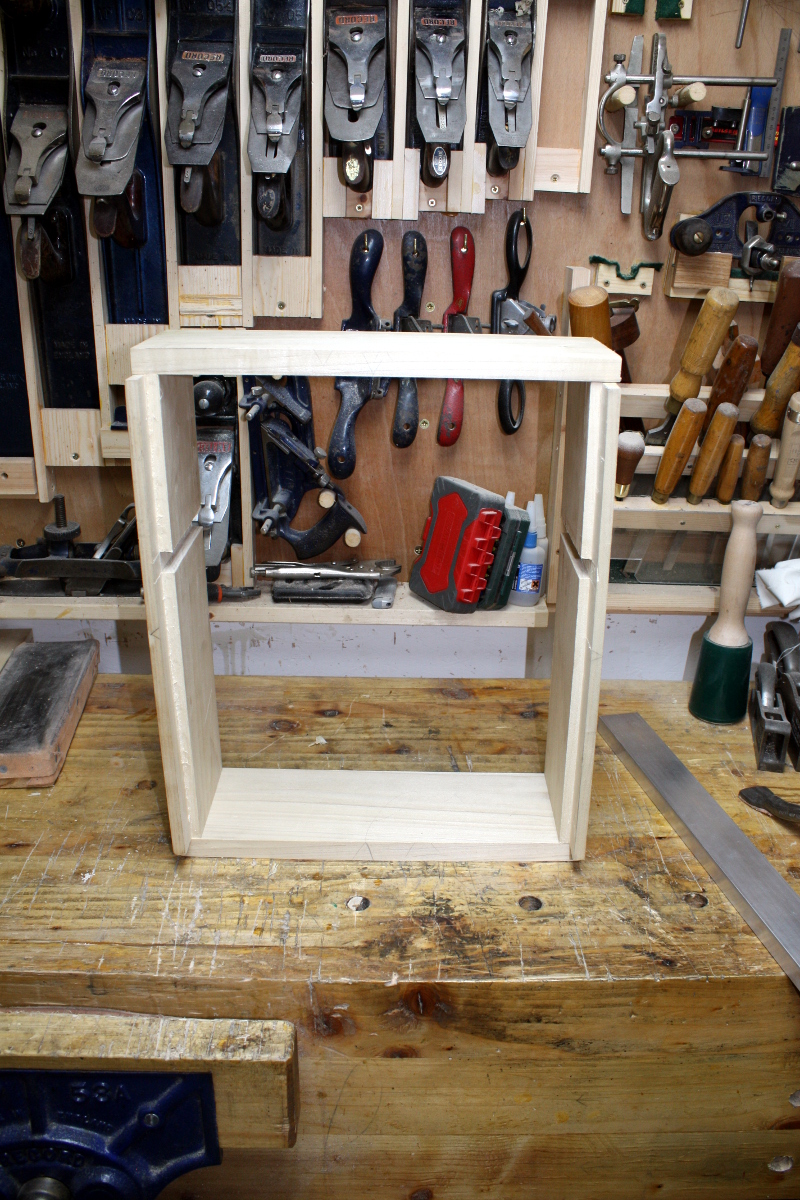 Just stood up the carcass and did a bit of humming and hawing and making sure I was happy with which board went where and which way up it faced. Then out with the sticky dots. 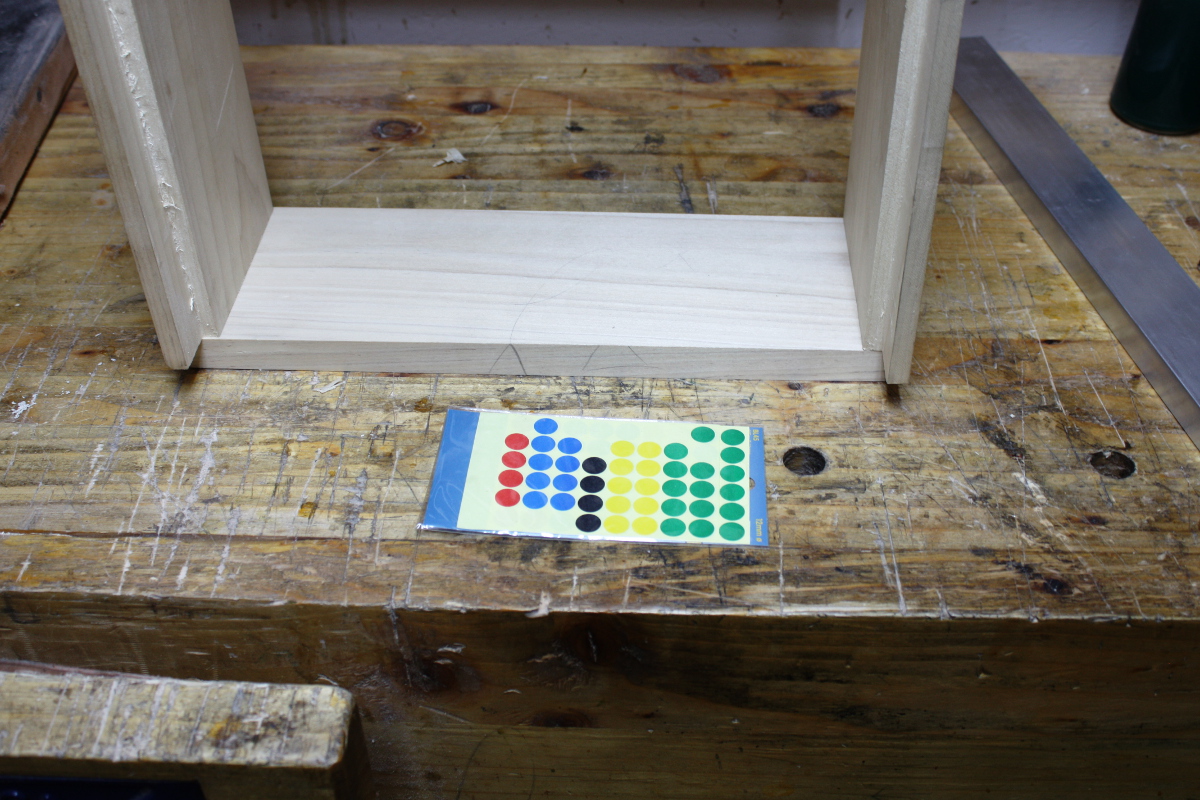 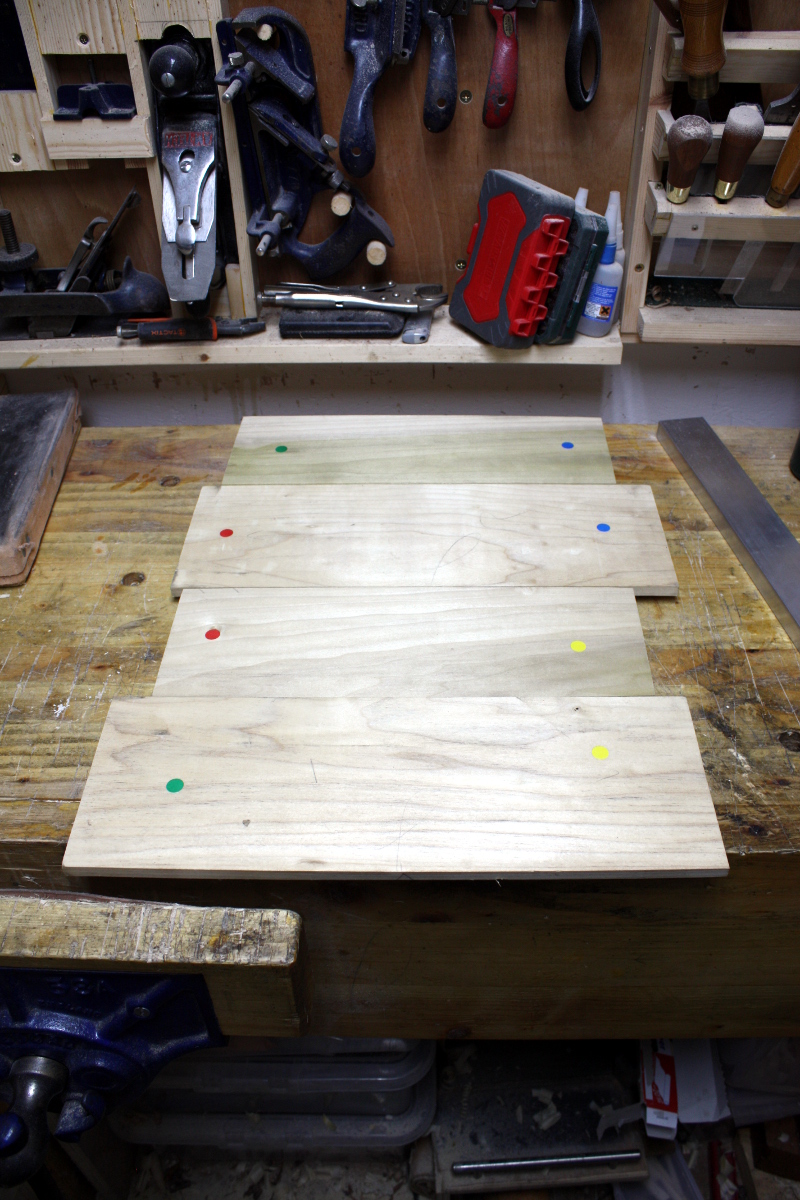 Nice little trick from David Barron that one, makes it easy to keep track of what end mates to what end and what side is on the outside. 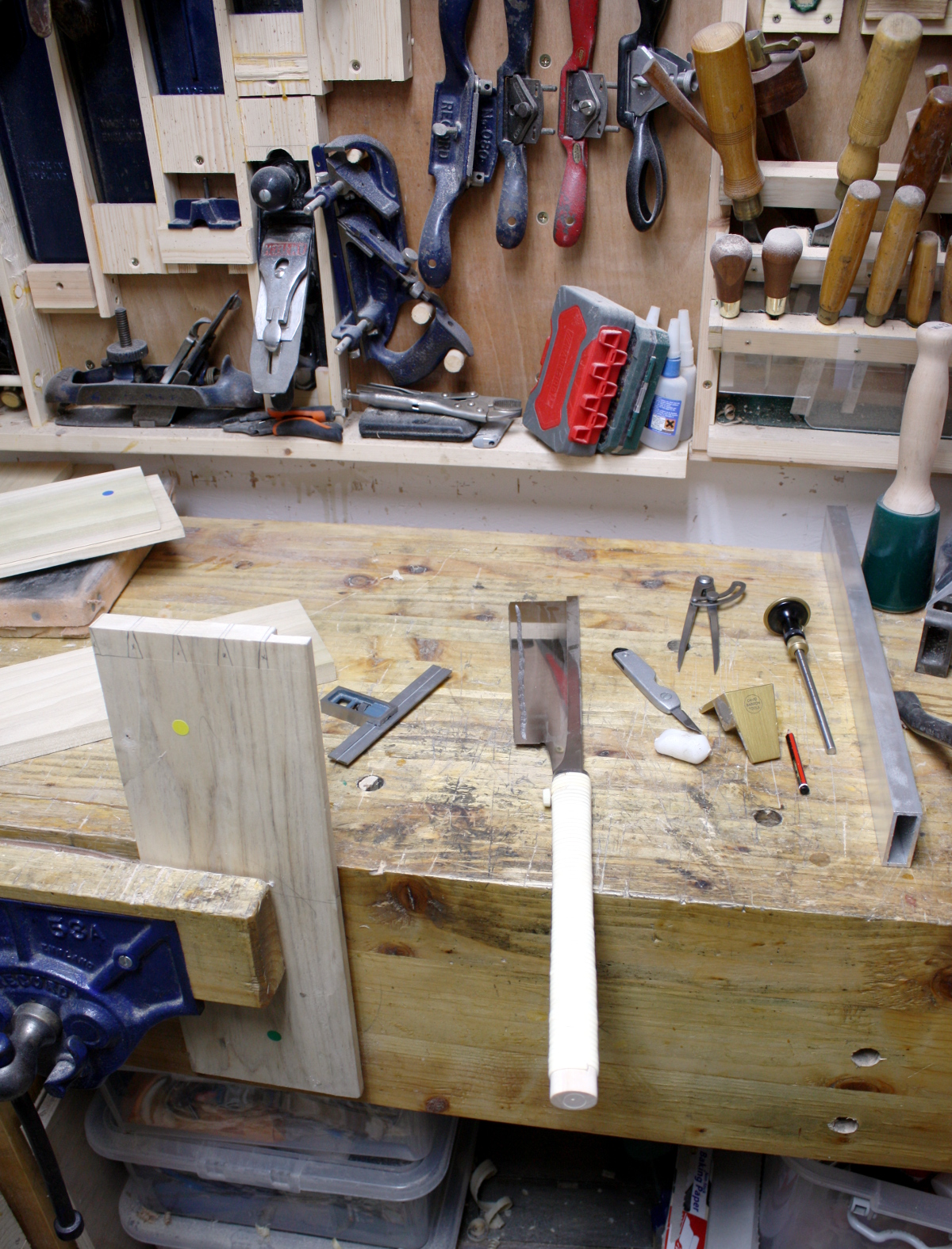 Picked a joint at random, got out the tools and marked up. 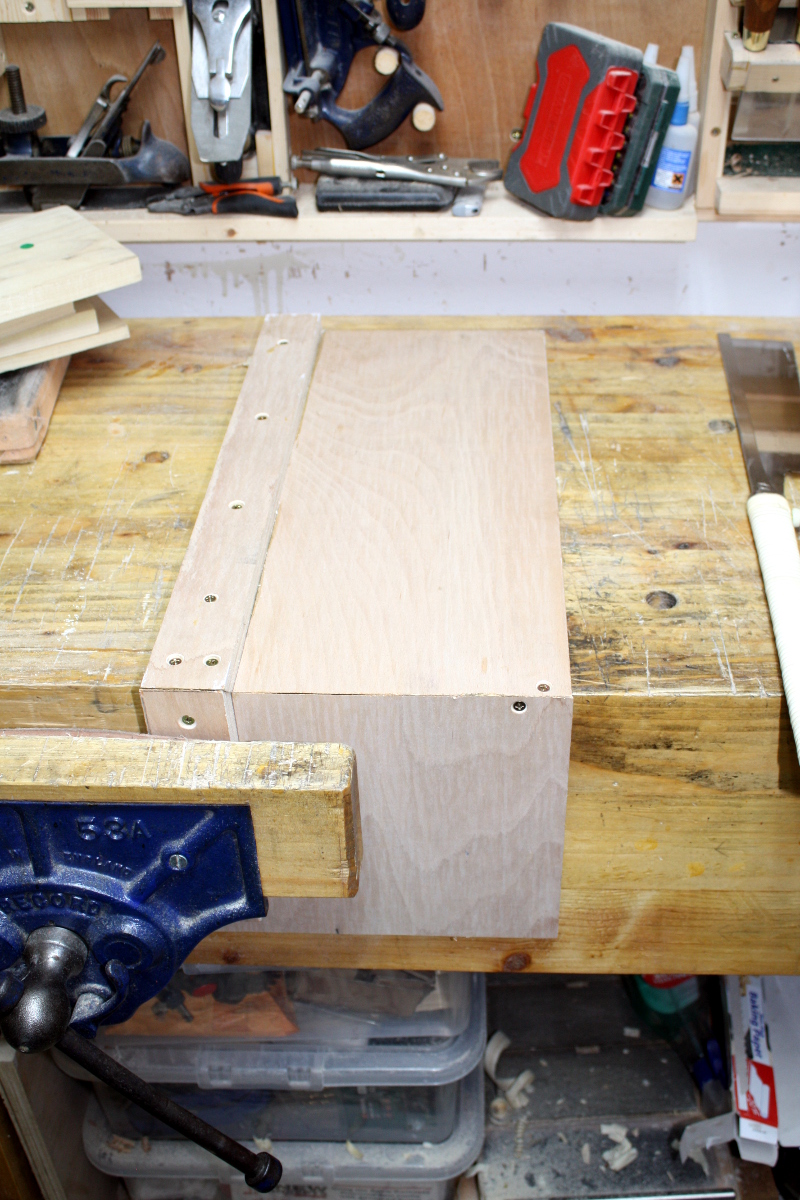 And after cutting the saw cuts, out with the new tool, a dovetail alignment jig (this one’s a bit sheddy with all the screws and plywood and glue, but if it works…) 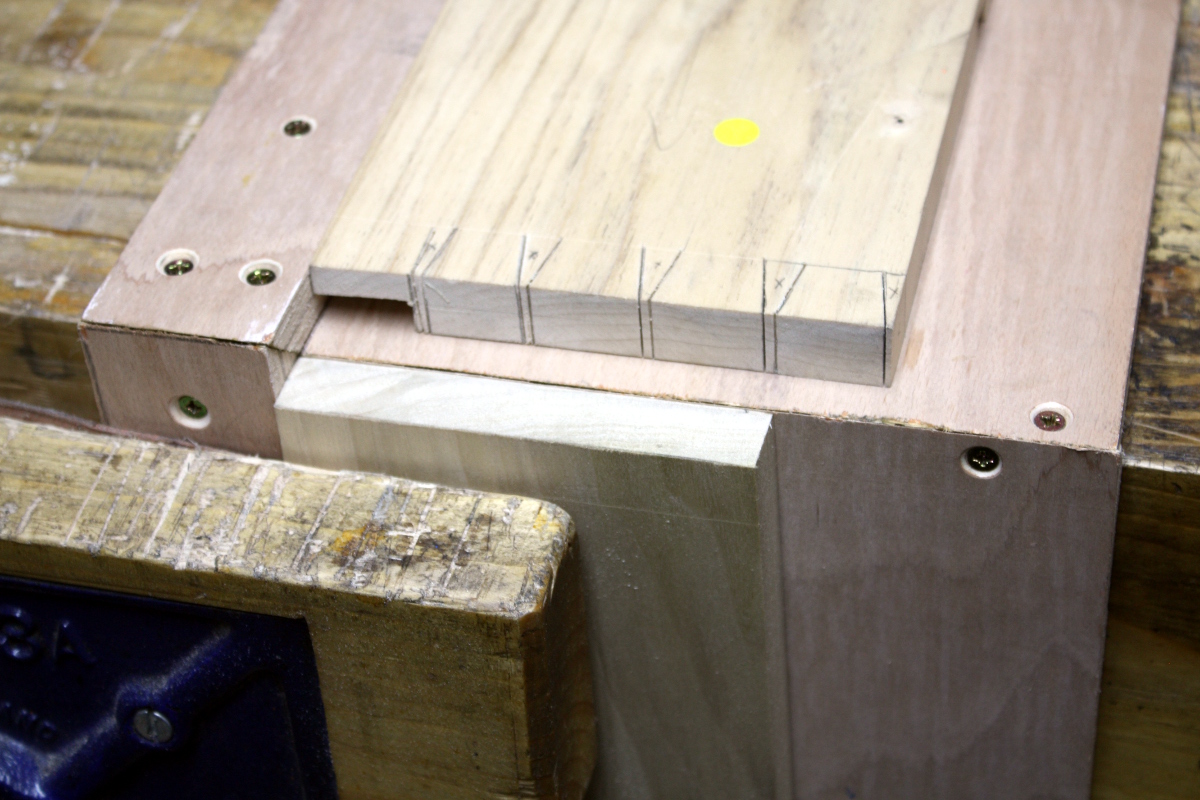 You get the idea, though the rebate is getting in the way here a bit – normally both boards would butt up against the fence to align, but here the critical alignment is on the inside shoulder of the rebate (or I’d just flip both boards over). So it gets a bit more finicky. In fact I might not use it for the rest of the joints because of that, but the idea itself is grand. 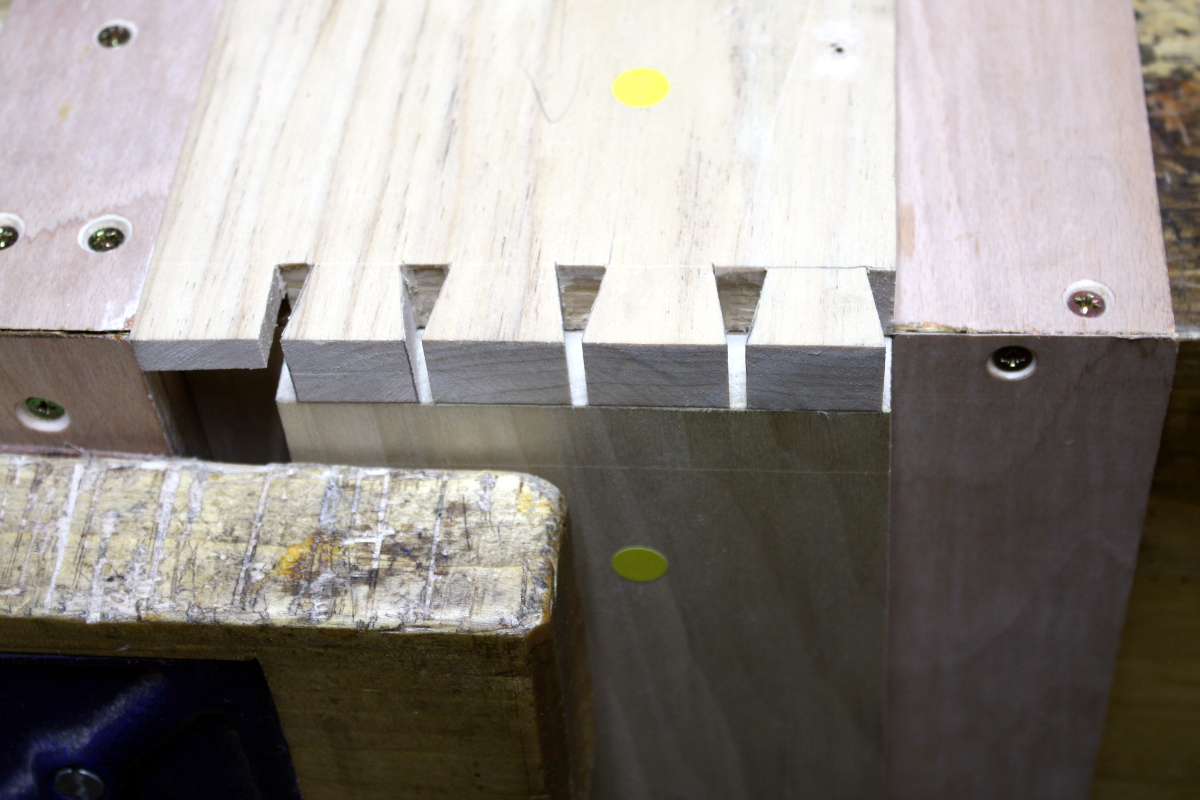 So it works reasonably well. I’m worried about it racking the carcass a bit though. We’ll see. I did have to wrap it there because I could saw out the pins and cut out most of the waste with the fretsaw but chopping the remaining waste after 2300h is a bit of an anti-social thing to do in a housing estate on a Friday night. Sleep, and hopefully an early start in the shed to try to get stuff done tomorrow. Time’s getting on and I might have to resort to power tools for one or two jobs I’ve been wondering about. Oh well. 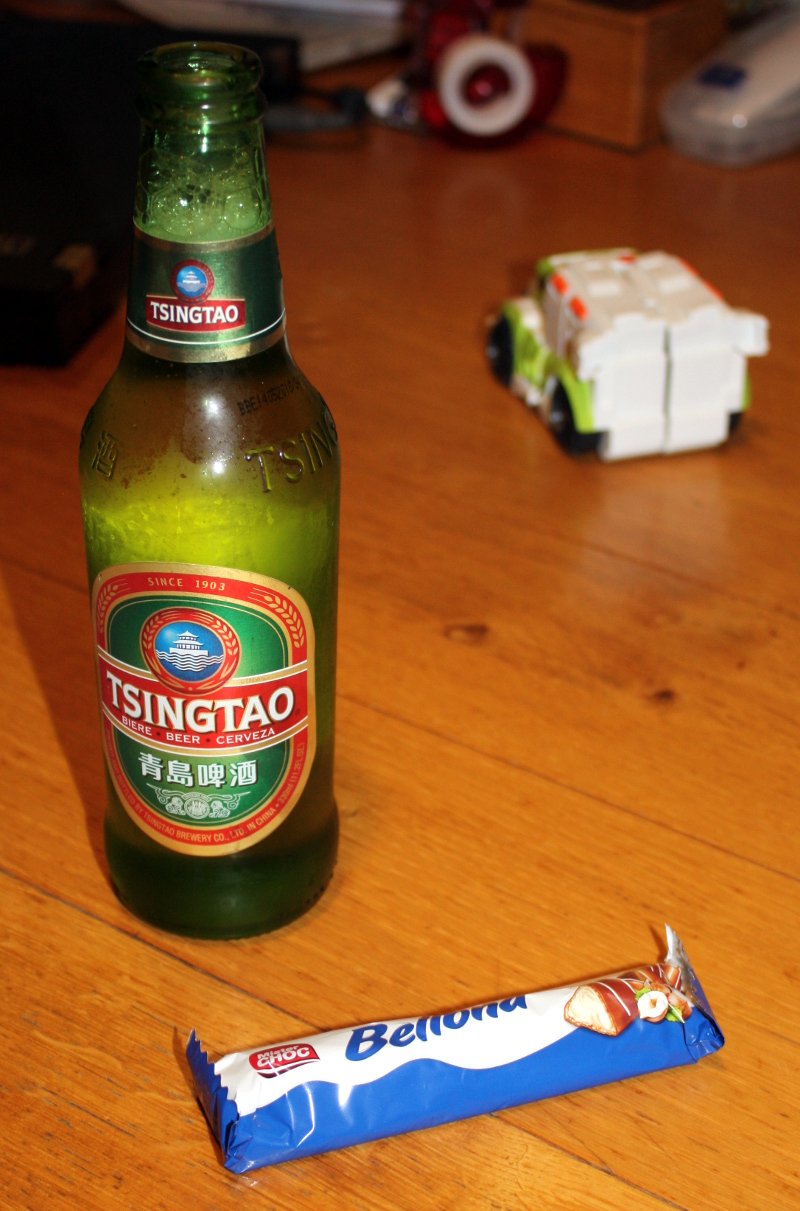