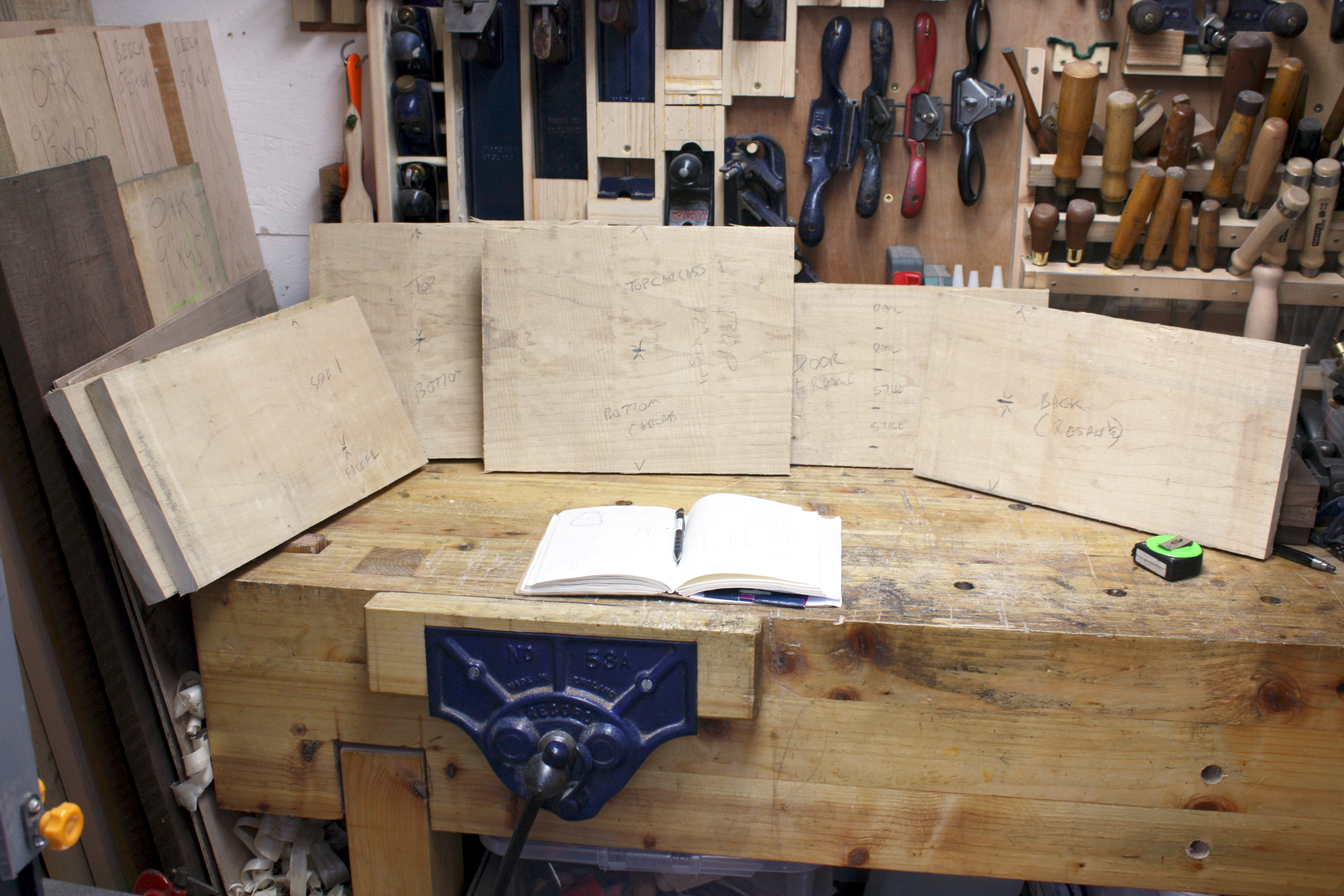 I figure, with six projects sitting in component form in the staging area of the shed, best get to work making even more components for a seventh project. Because Reasons.

Anyway, the first video I ever saw by Richard Maguire was about building a small wall cupboard (in a sort-of, kind-of, if-you-squint shaker style probably best described as “`English colloquial” 😀 ):

I’ve wanted to build this for a while. But I don’t have the ten feet of pre-planed three-quarter inch thick pine his plans call for. What I do have is a pair of boards of inch-and-a-quarter rough-sawn poplar, mostly free from green stains… 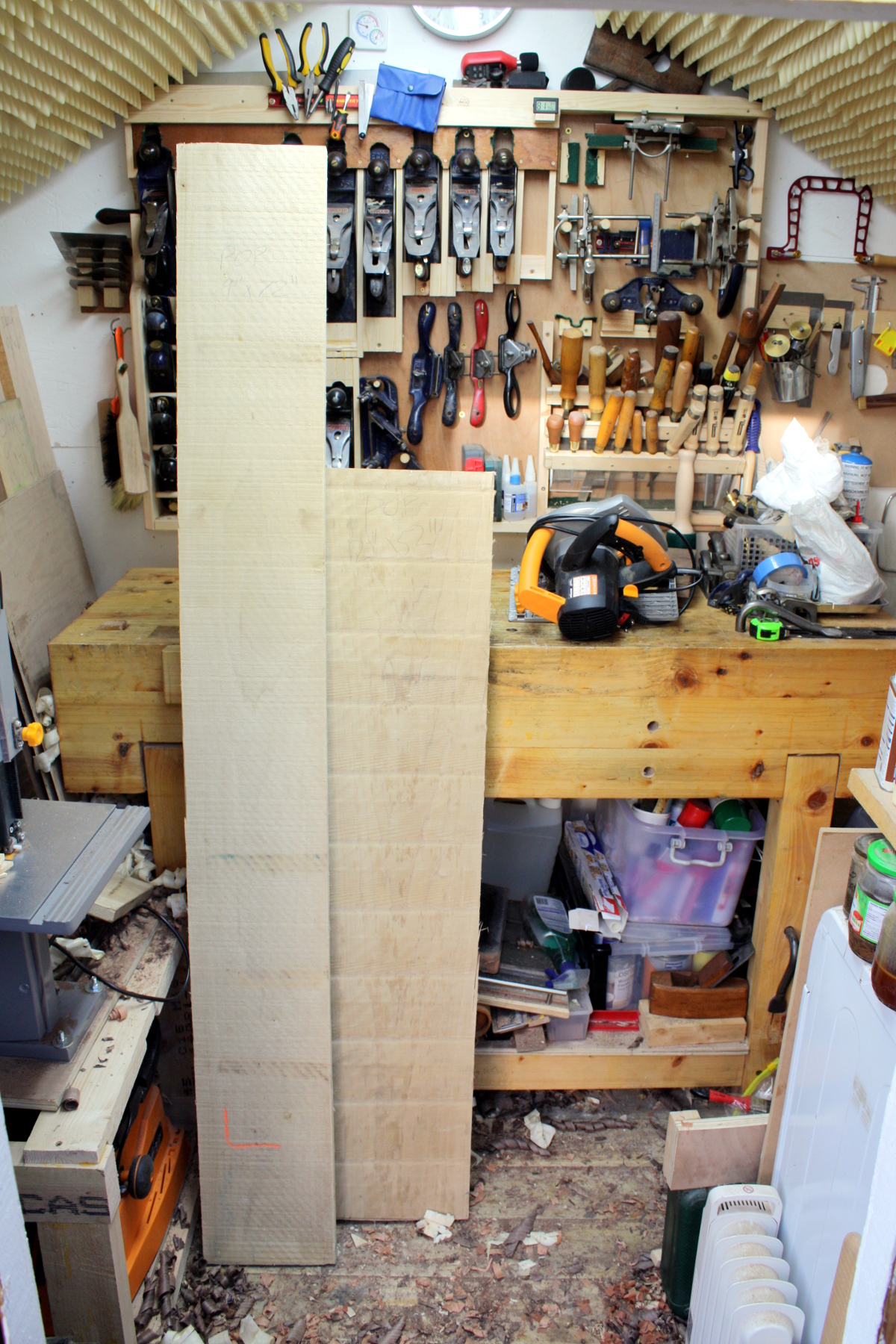 That should work. And sod feeling bad about doing the rough-cuts with a power circular saw. Do you see room in there for me to swing a full-size handsaw? Or have a sawbench? Besides, do you know how they did this back in the 17th century? Apprentices!!! (And there isn’t room for one in there either, even if you can find smaller rooms being rented for the price of a car a month on daft.ie). So. 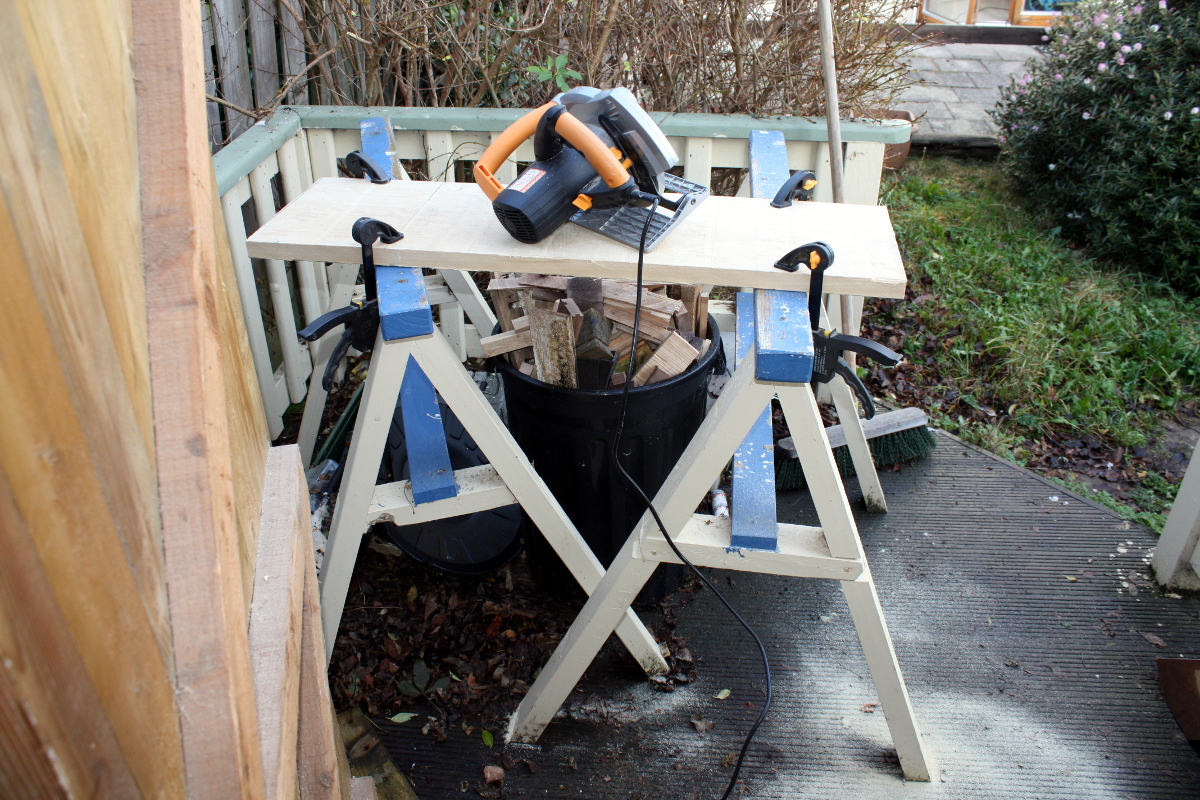 Woodwork al fresco. Yes, the deck’s a mess. I’ll tidy after the solstice when there’s time. 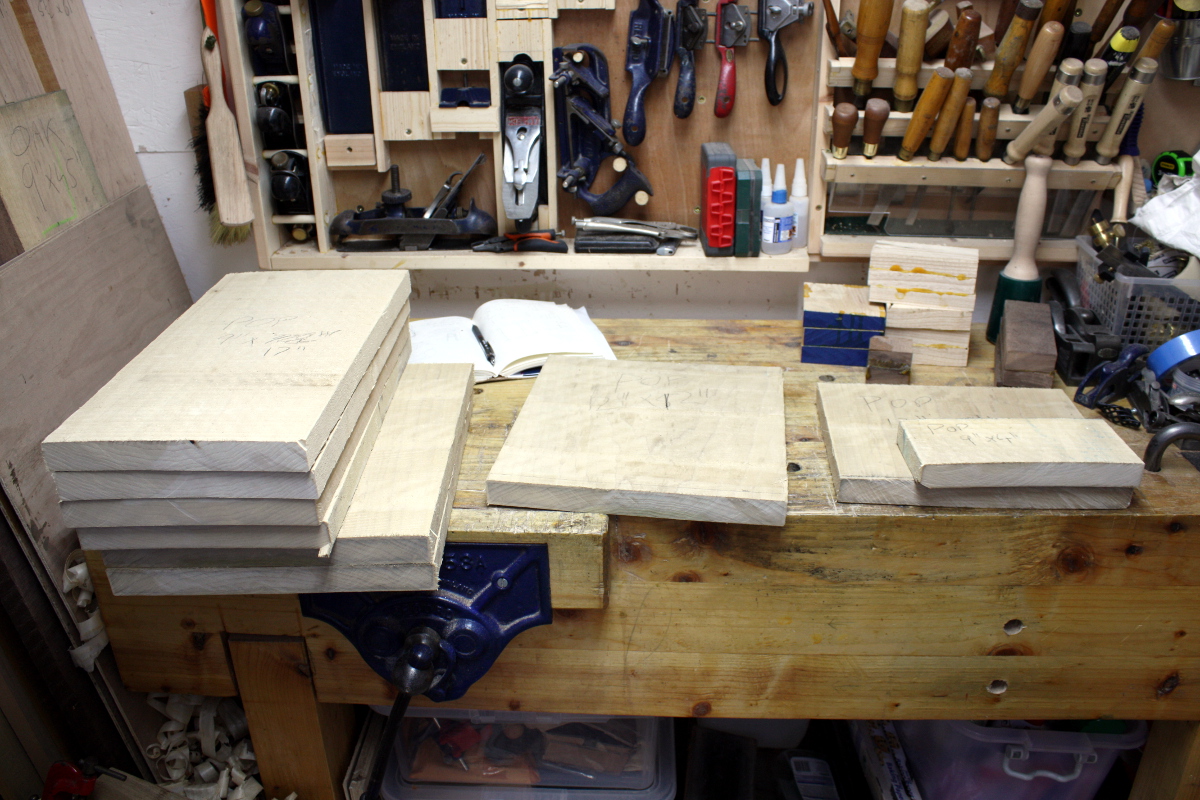 Right, that’s the rough-cut chunks for the cupboard on the left, a chunk intended for another project (yes, that’s eight, I know, hush), and offcuts that will probably become bandsaw boxes or the like.

Now, time to figure out layout a bit better.

Design, meet wood. Wood, meet design. This is the humming and hawing stage when I try to think through the size in the design and how to break down the parts best, and whether stuff is getting thicknessed by scrub plane or resawn or whatever.

Resawing is a pain to do, thicknessing is only slightly better, but a lot of parts in this can be under three inches wide and those I can resaw with the bandsaw reasonably easily. I do have a frame saw on the way for wider stuff to see if it helps (lots of people say it does), but the thing’s in Cologne with no sign of moving for the last week. Sodding DHL. 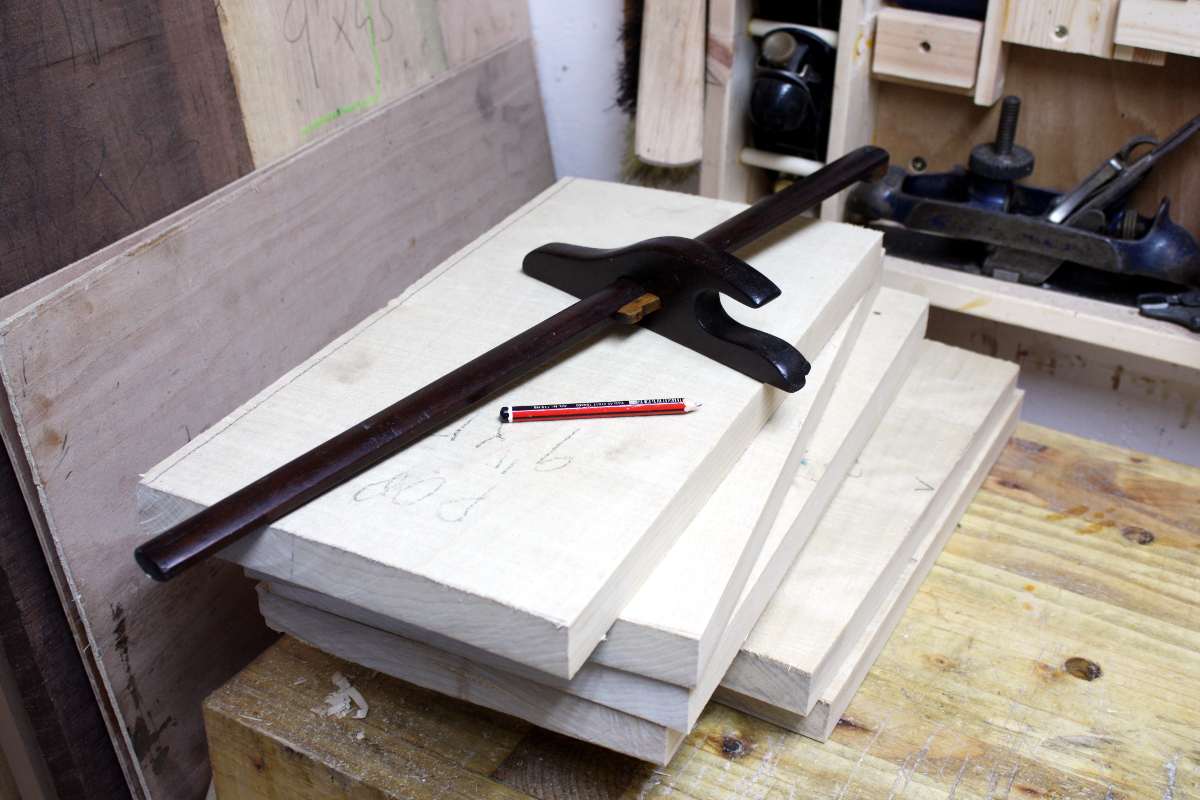 Round one with the bandsaw. I’ve planed a reference edge with the #05 and #08 and marked off the far edge with the panel gauge after sharpening the pin a little with the diamond paddles. I’ll rip those on the bandsaw and get widths (there’s some damage on the edges – the boards must have been near the edge of the pack in the timber yard I guess). 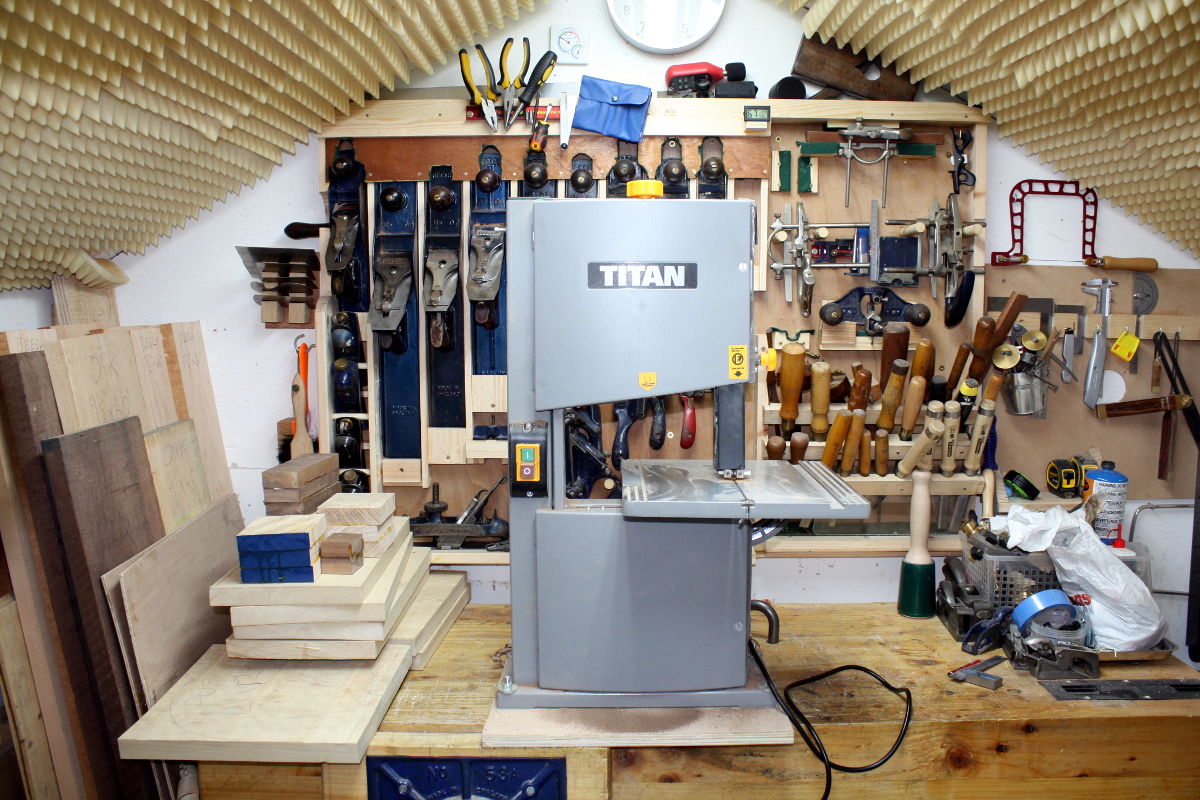 And I’m trimming up the bandsaw blanks while I’m at it. 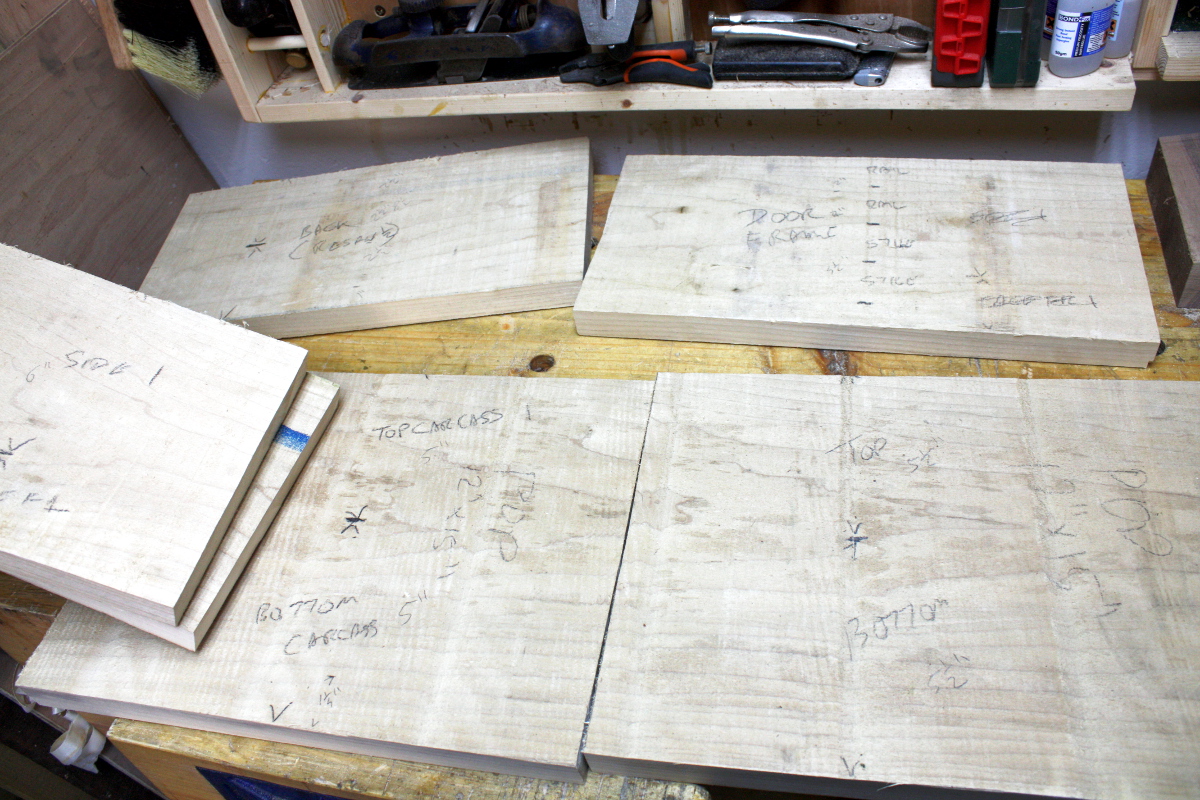 Right, that’s the edges sorted. Plus I get a few pieces to test finish on. 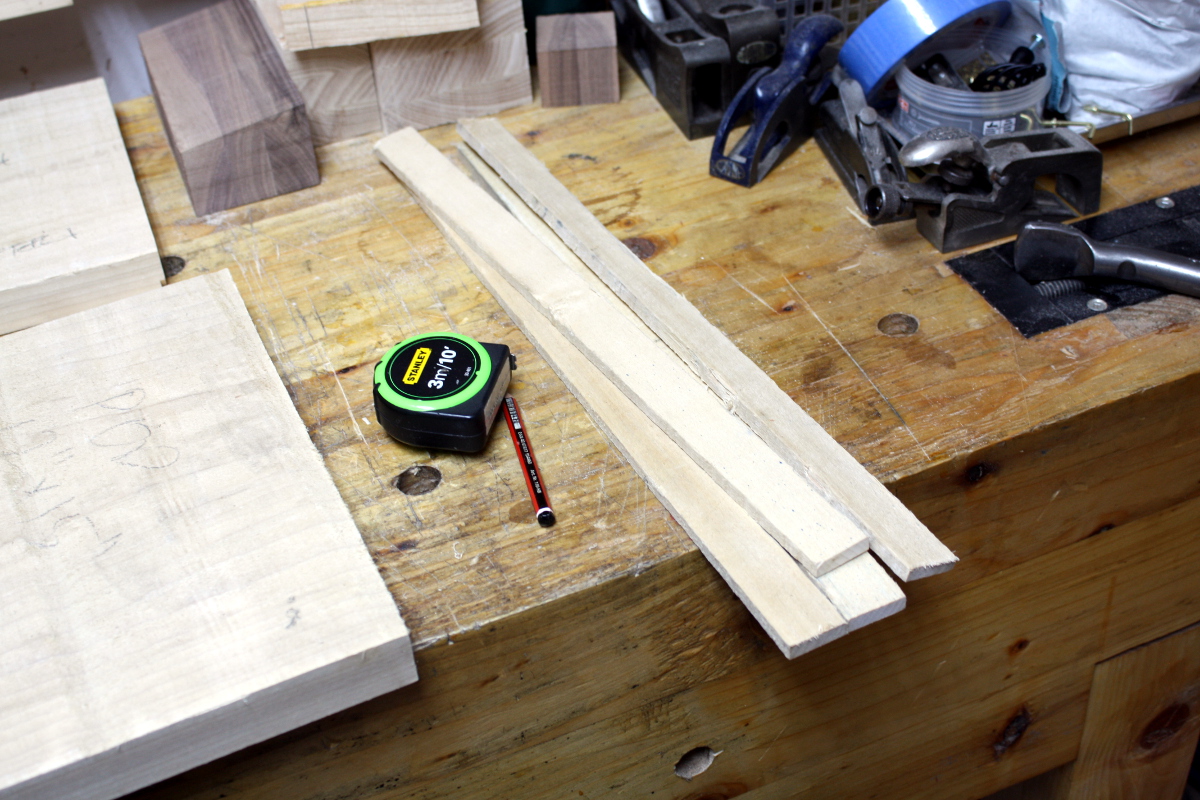 Then I start marking off various parts. By the time I’m done, I’ve used almost all my gauges (you don’t unset the gauge until you’re sure you’re done with that measurement; that ensures you’ll only have to reset the gauge for the one cut you’ve forgotten instead of five or six times). 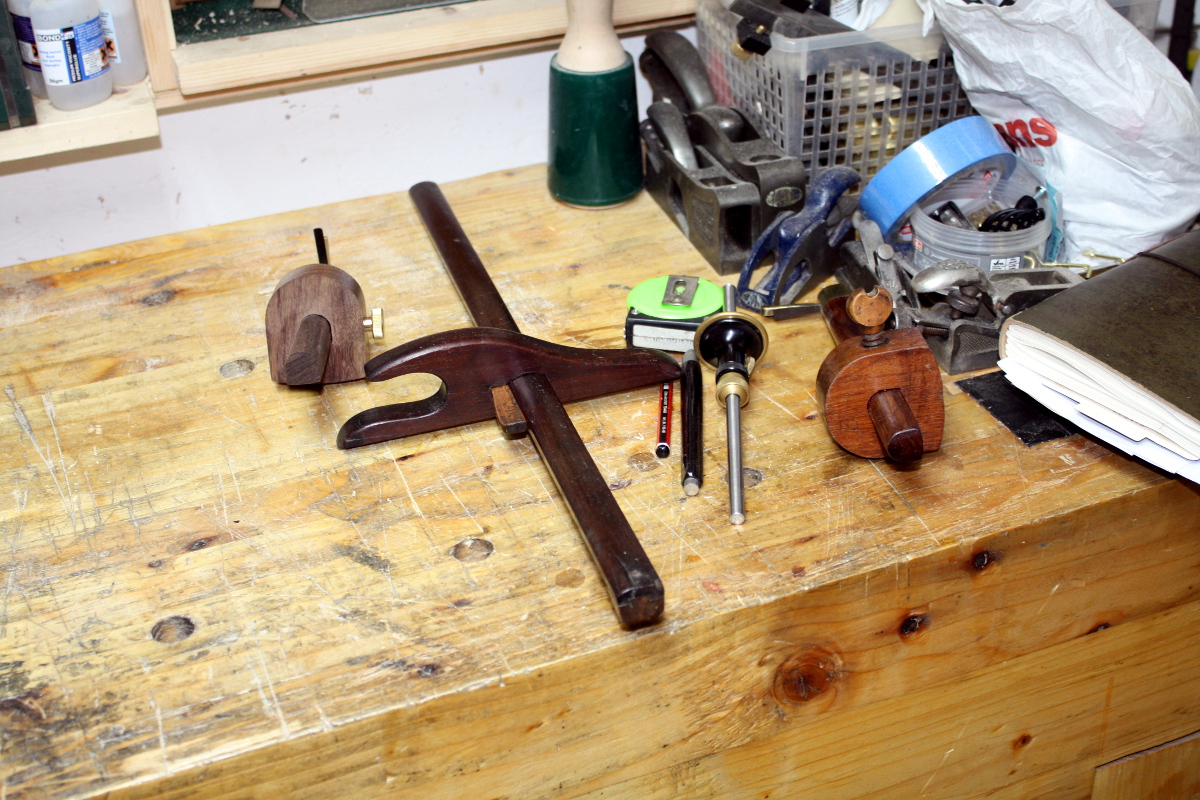 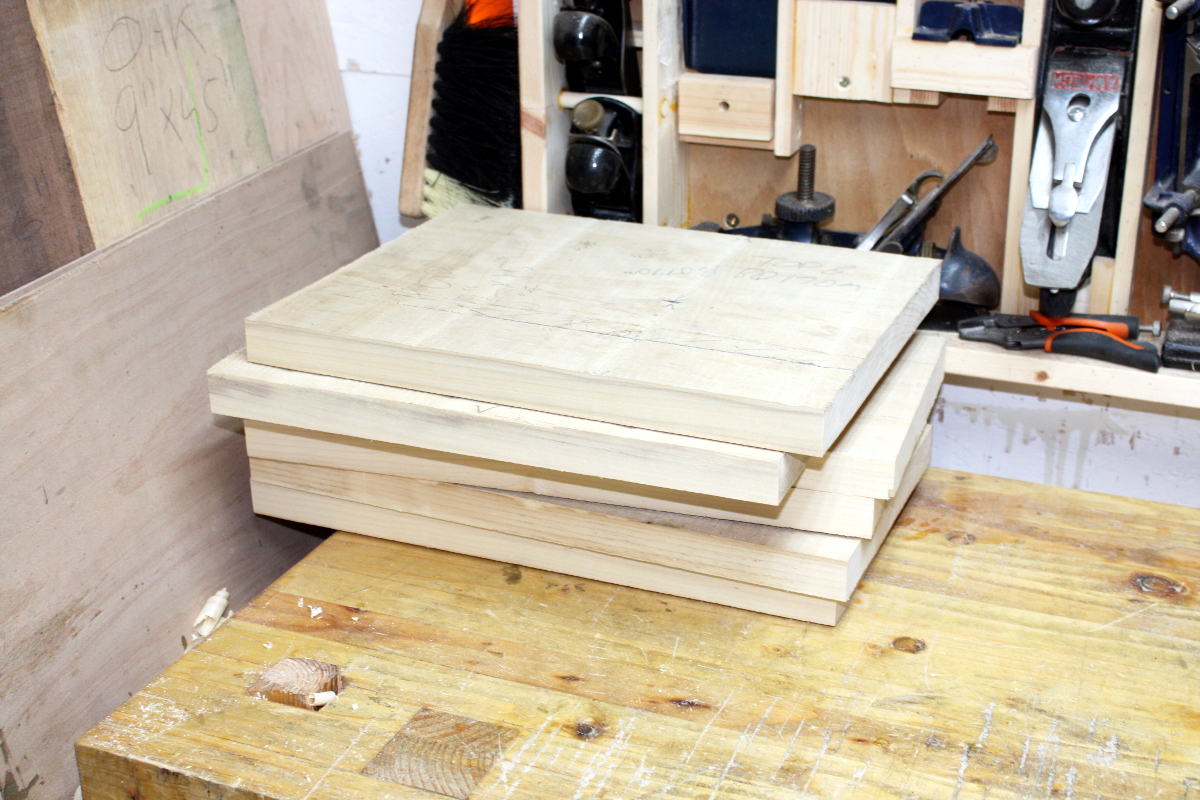 And time for round two with the bandsaw (after lunch): 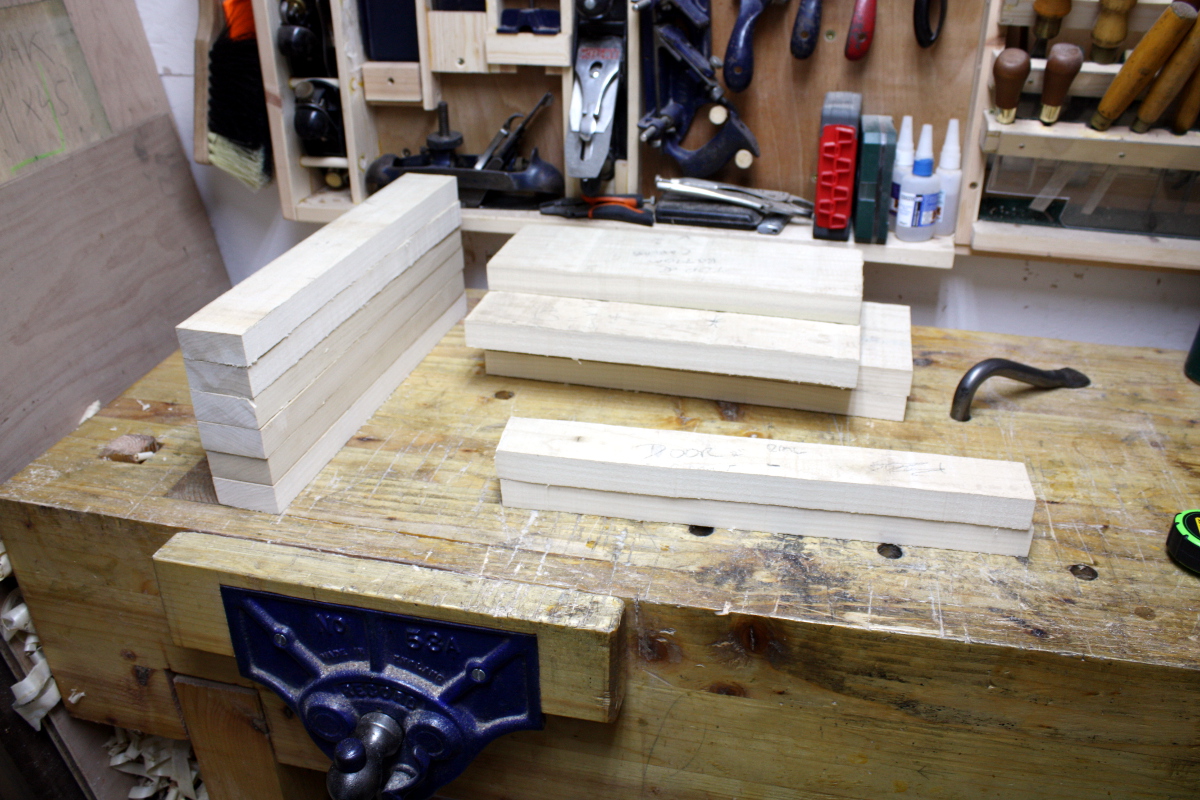 Right. Now I plane a reference edge and face on each part and mark the relevant parts for resawing or thicknessing. And then change my mind about thicknesses – I’ll leave the front of the cupboard three-quarters of an inch thick (which is a standardish sort of thickness for these things) rather than a half-inch. The back panel will still be a half-inch, and I’ll make the sides three-quarters and the top and bottom of the carcass and the shelf will be half-inch and so will the top and bottom cap pieces (so top and bottom overall will be an inch thick and the sides a quarter-inch less).

This is about the point where I discover that my favorite small proops brothers engineers square is… not. Square that is, it’s out by almost a full mm across its arm, I must have whacked it off something without noticing. I know I didn’t drop it. I don’t know if you can true one of these back up with the kit I have available. I may just need to buy a new one (for all of a tenner or so). In the meantime, I have another engineer’s square and the new Moore&Wright sliding square so that’s fine. Except that I had to reshoot a bunch of edges to get them back to square. And then marking them out for resawing. 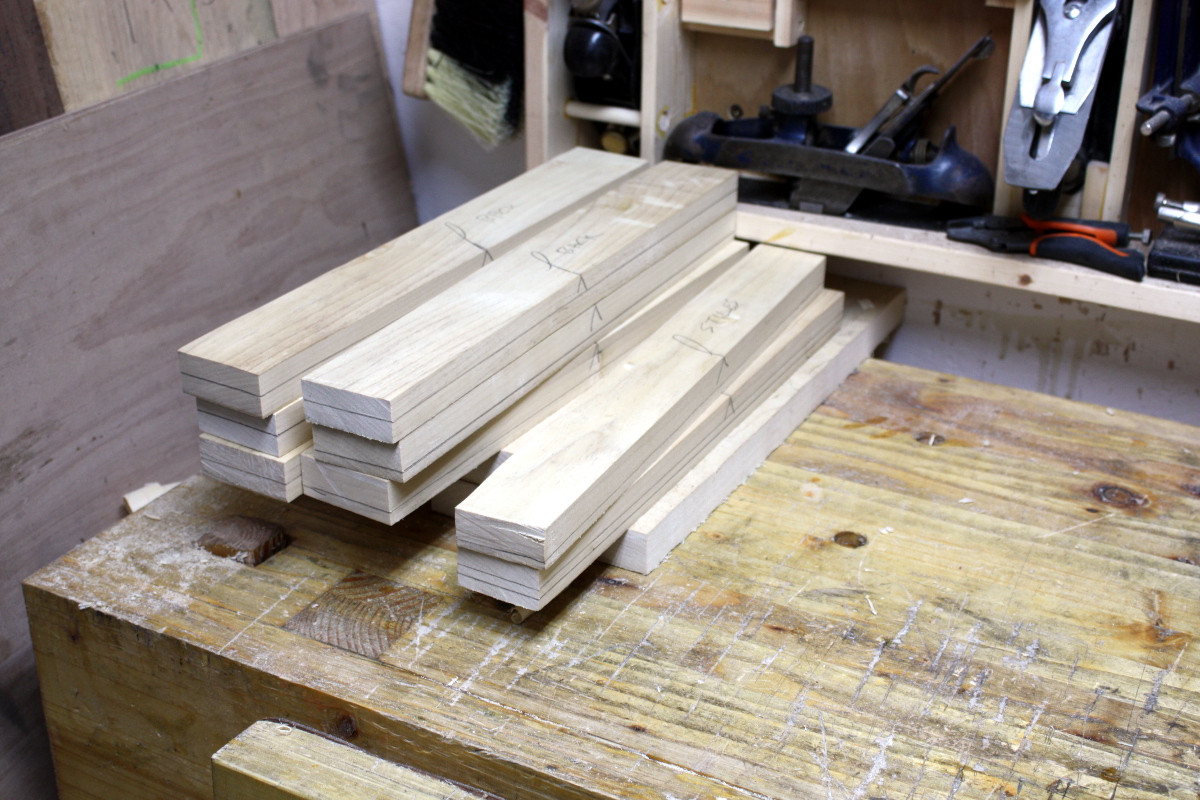 And back to the bandsaw for round three… 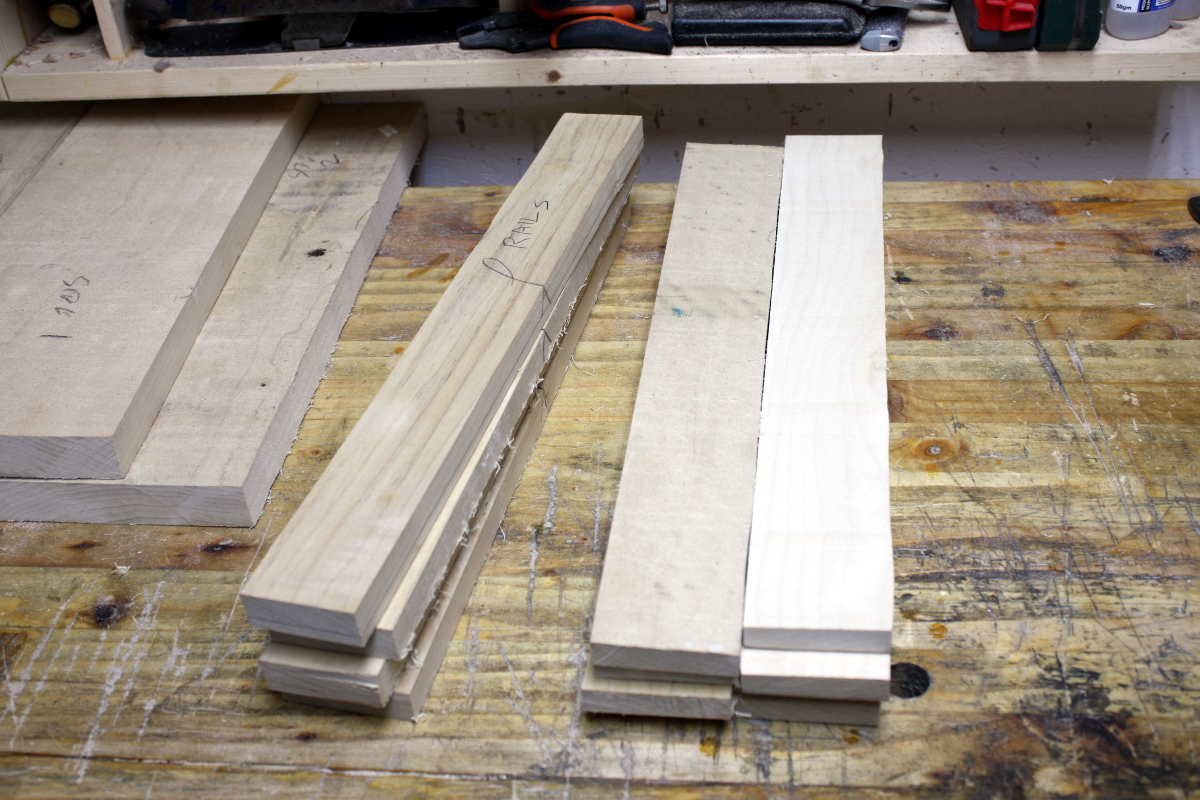 Right. That’s the rails and stiles for the front door, the boards for the back, and the sides and top and bottom will have to be resawn by hand. 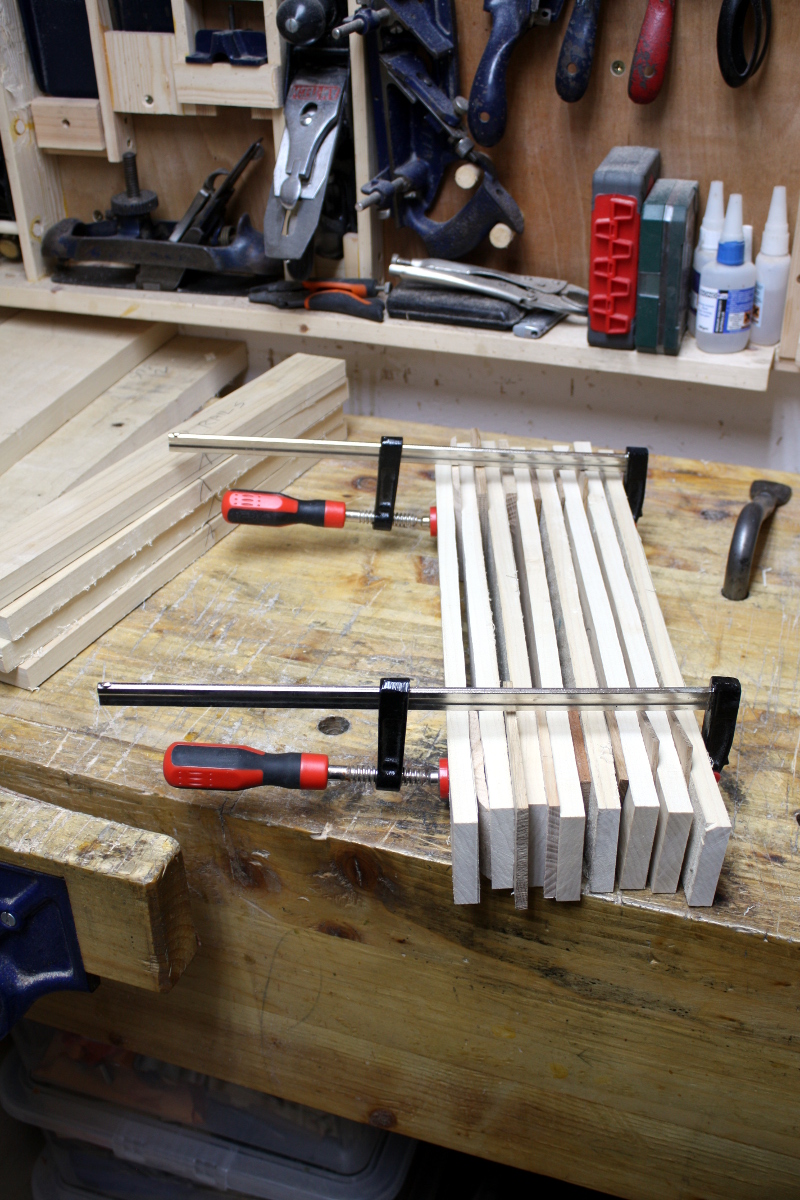 Just clamping and stickering them for now to let them dry overnight without too much warp. 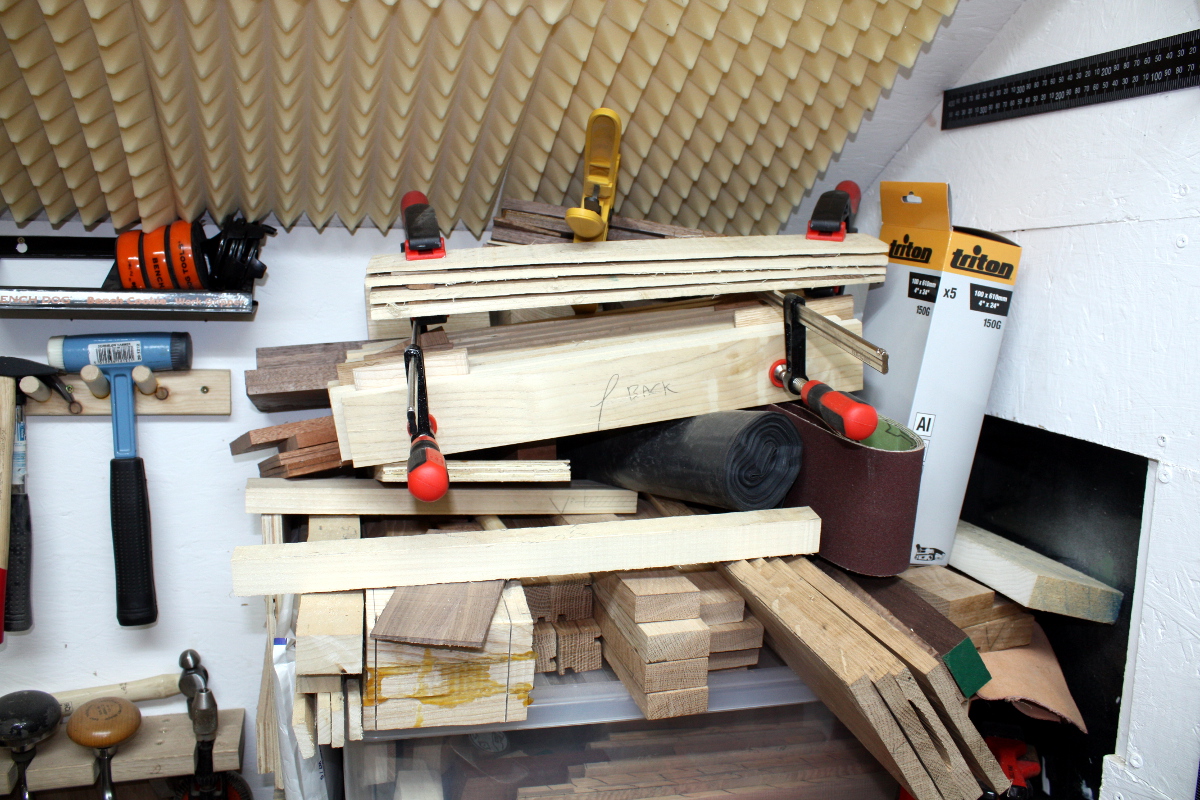 Yeesh. Really do need to start joinery on something soon, if only to clear space. I only just finished tidying this up on Saturday… 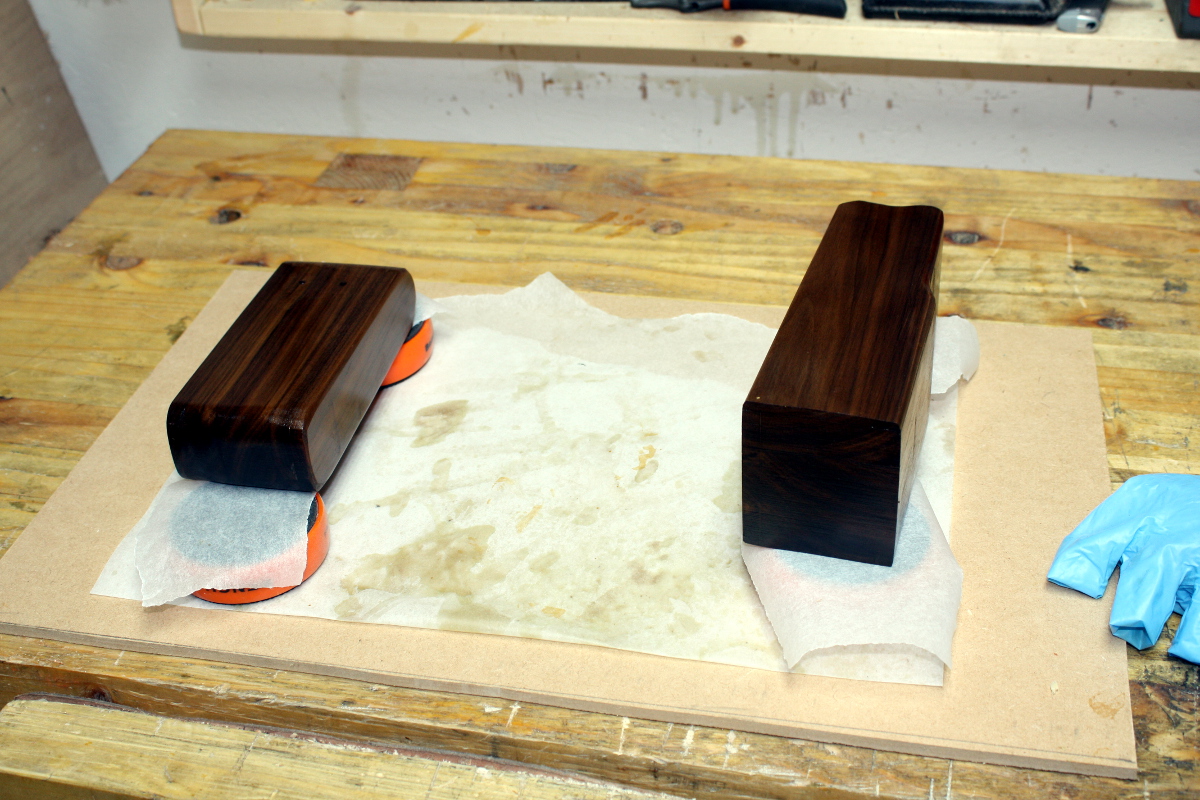 And then there was this idea from Paul Sellers:

And it looked simple enough that I could do it with Calum, so I prepped a piece of pine and this evening we drew lines on it, sawed it with a small ryoba rather than using the chisel Sellers used which would be a little dangerous for a five-year-old (or for me in close quarters with a small child holding a surgically sharp pointy lump of metal for that matter), and cleaned it up using “his” number #03 plane (because it has two places to hold that keep small fingers away from sharp edges). And then split it with a hammer and enough glee to convince me it’s a good thing we don’t have a cat. 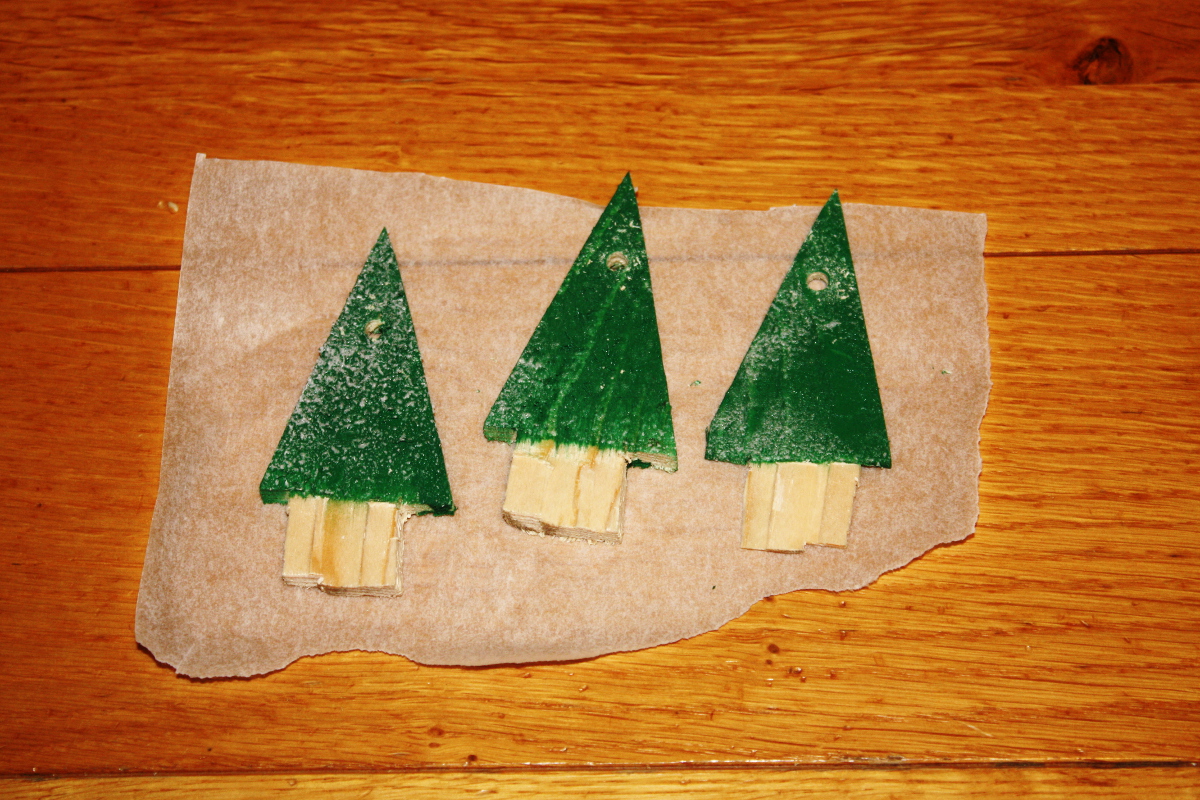 Not bad for a five-year-old.