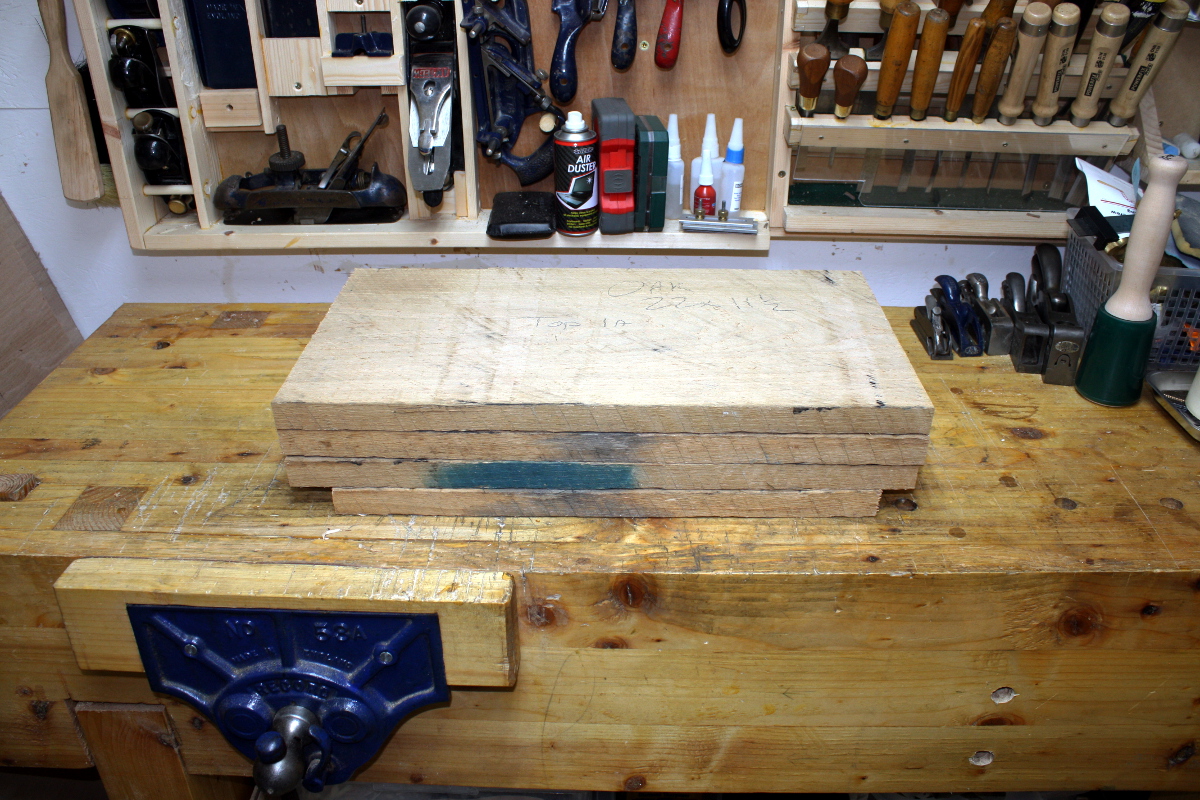 And after a fast skim. 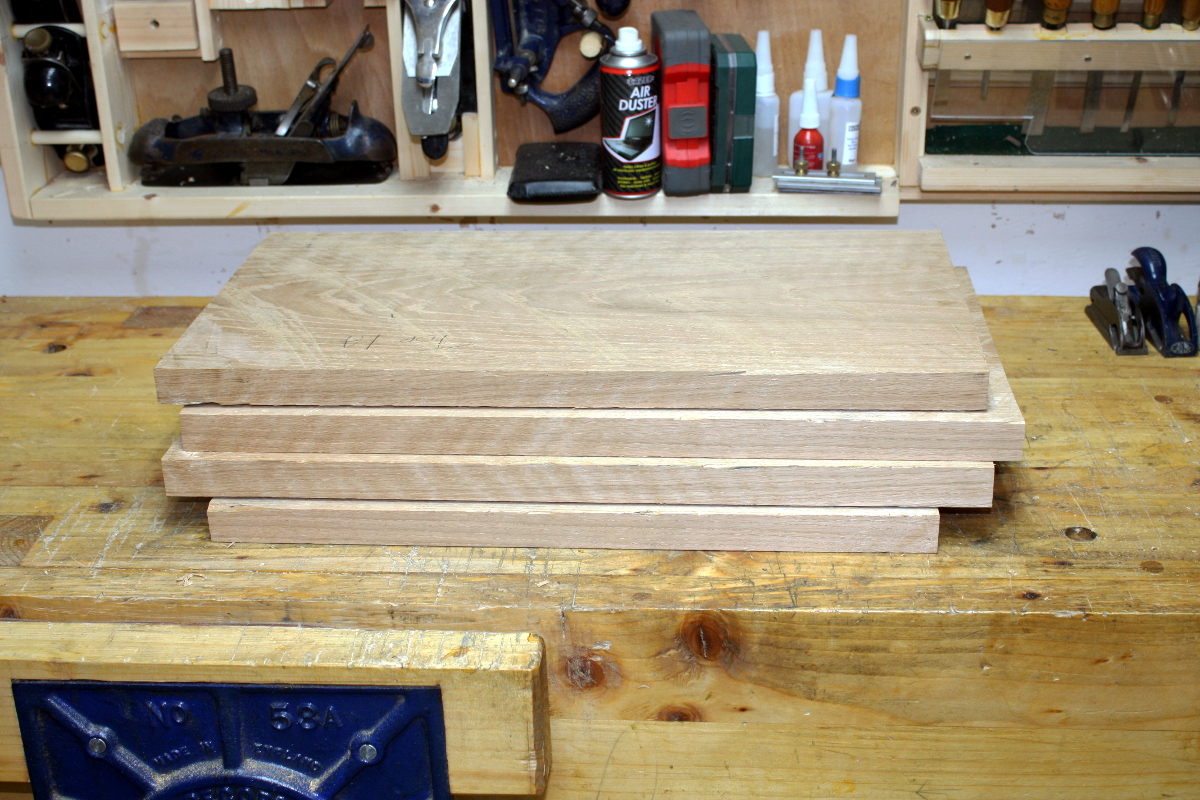 Not worked in oak very much yet, this should be interesting… 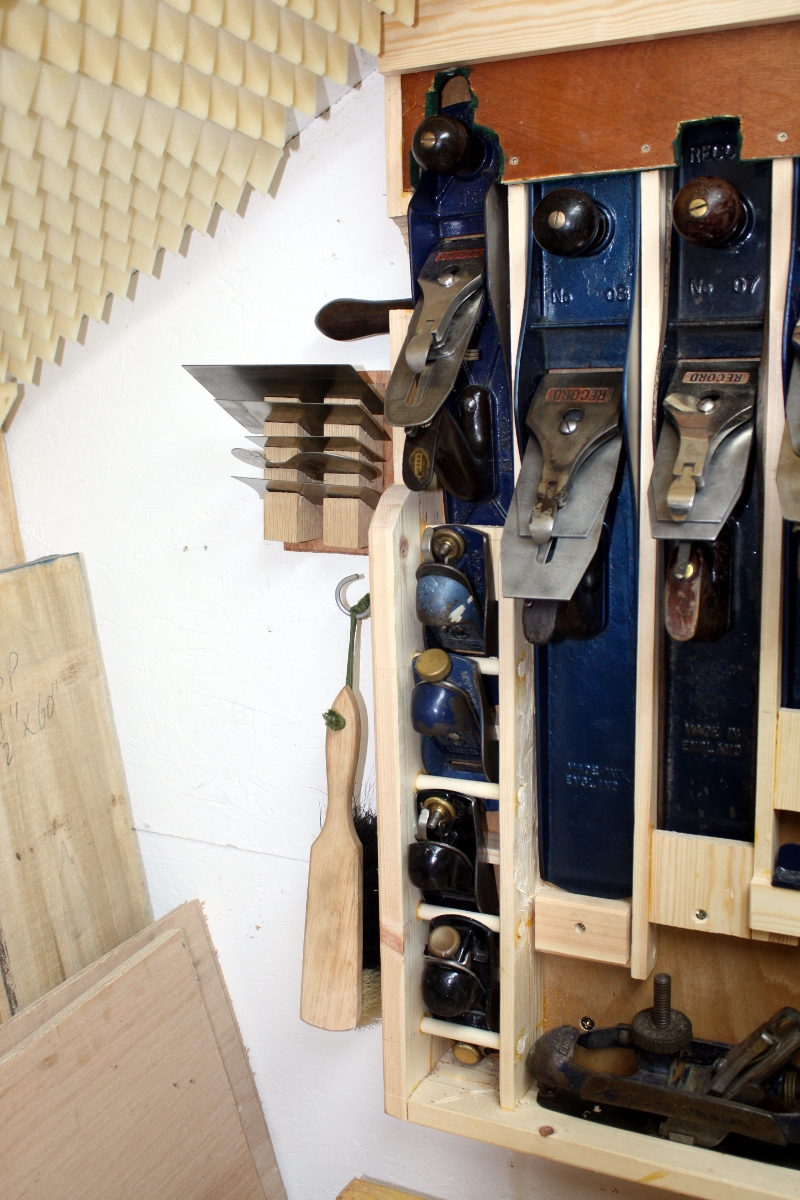 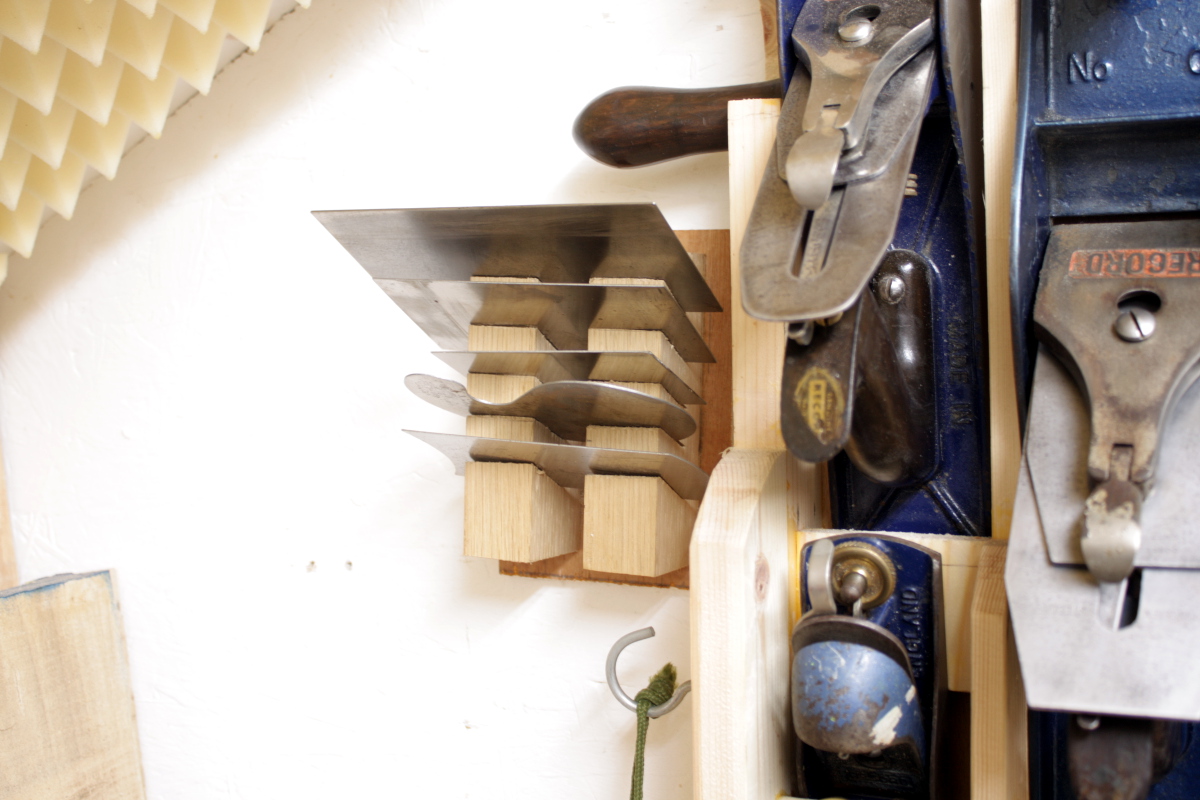 And then the second thing was going through every single plane and chisel on the wall, going over all the unpainted parts with 600 grit wet&dry paper and WD40 to take off the surface rust, then rubbing briwax into the steel as a barrier against rust (renaissance wax would be better and some’s on the way). I’ll have to do this every weekend for a while to get the barrier layer set up properly.

There may be a dehumidifier in the shed’s future.

But through random chance the first few I bought (I bought a retiree’s toolkit off ebay as a starting point) were all Record planes. And over the course of a few months I learned, as everyone does, that hand tool woodworking was effectively killed off during the second world war, though it had been in decline for a while before then. Machines and power tools took over for wood fabrication; and after that point, tool companies could no longer compete by producing the best tools because workers were no longer competing on how fast they could do the job to a set standard. Nobody needs to spend a weeks wages to buy a saw that can be sharpened more so you can cut 5% faster, when they can spend that much and get a saw that cuts 500% faster. The demographics of buyers changed markedly and suddenly a tool that would stand up to occasional weekend use and not cost a week’s wages was the thing that was in demand (and thus was born things like Black and Decker). Older tool companies either changed (like Stanley) or went bust or were bought up in mergers (like Woden) and so there’s this quality curve that takes a slow or a fast decline at some point after the end of WW2 for every hand tool manufacturer. Older tools are substantially better than modern ones from companies like this; you have to go to the modern artisan makers like Veritas or Lie Nielson to beat the vintage stuff. And that’s seriously expensive by comparison so most people go vintage, at least in the beginning where I am.

Now Stanley were the main brand for almost a century (and are still around) so if you go to ebay and try to buy an old hand plane, they tend to pop up first. But there were so many, identifying them is an expert’s task – is this one a bargain that’ll work like a charm for decades or is it only fit to be melted down for scrap, not even worth the postage? So instead, I just kept looking for Record because they didn’t dive down the curve for a few years later than Stanley and they’re relatively easy to date even from ebay photos.

So my #4, my #4½ and my #5½ got joined by a #7 and a spokeshave and a shoulder plane and a rabbetting plane and so on, all from Record’s catalogues as I thought I’d need them. And then one day I turned around and aw, crap, I have a collection of the sodding things. 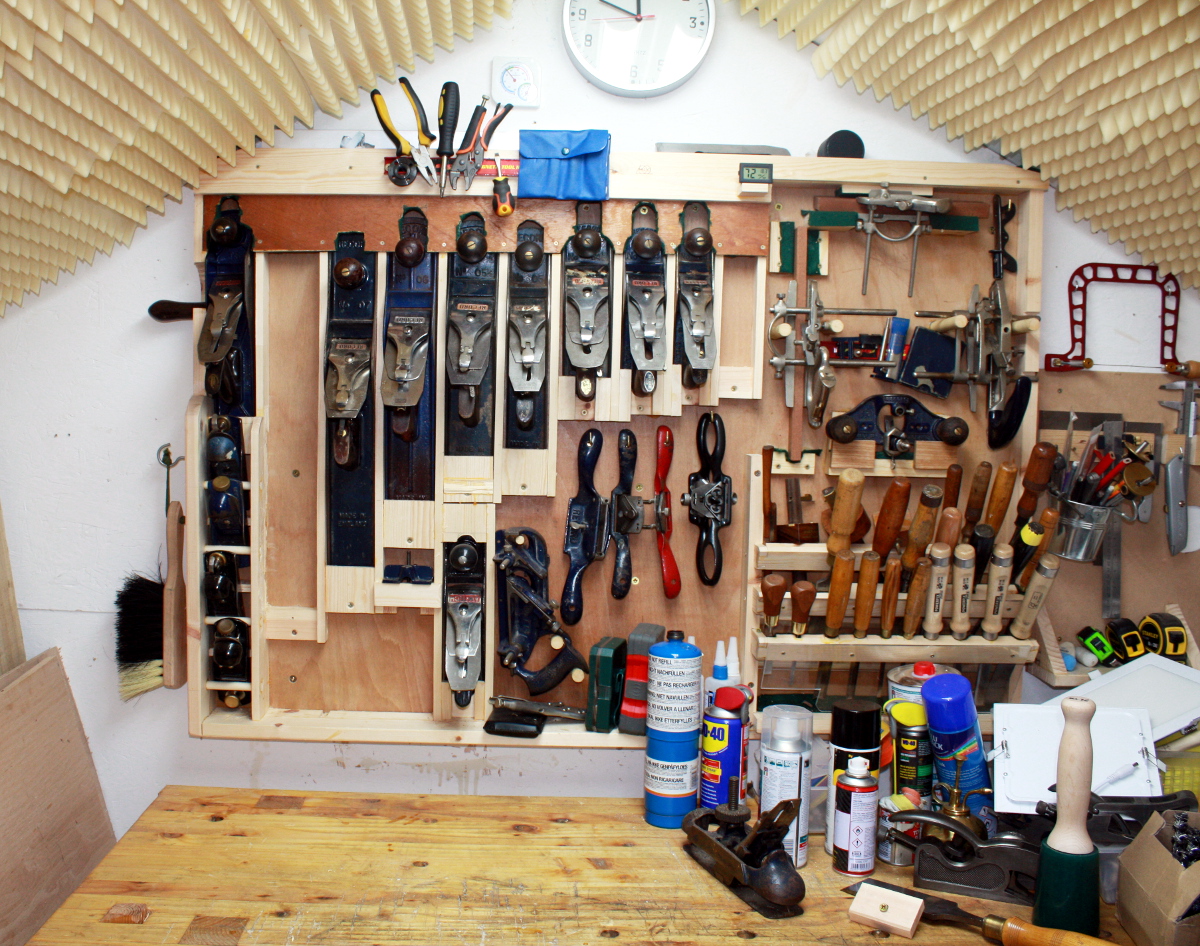 Every slot filled, with planes for getting things straight, getting things curved, carving slots or rebates into things, and so on. But two empty slots got build in there, for the last two obvious things I’d “use” – a large Record #8 jointer plane and a small Record #2 smoothing plane. 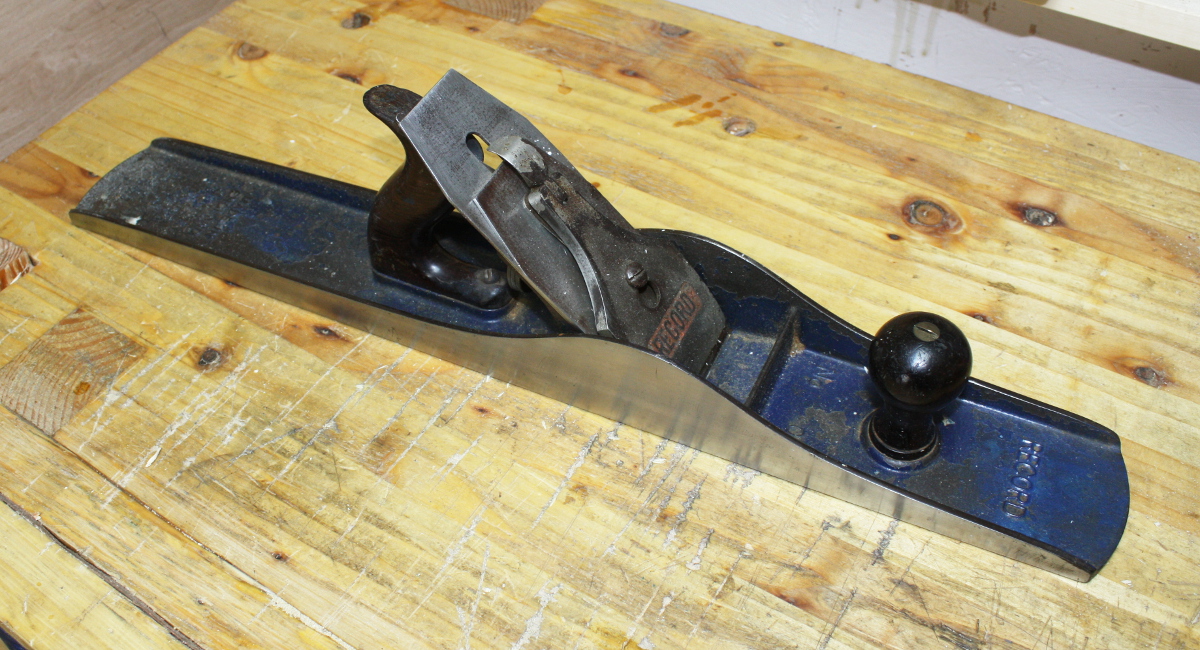 Came up on ebay and I couldn’t resist. Old too, this is from somewhere in the 1945-1950 range based on its design, frog, blade and handles. 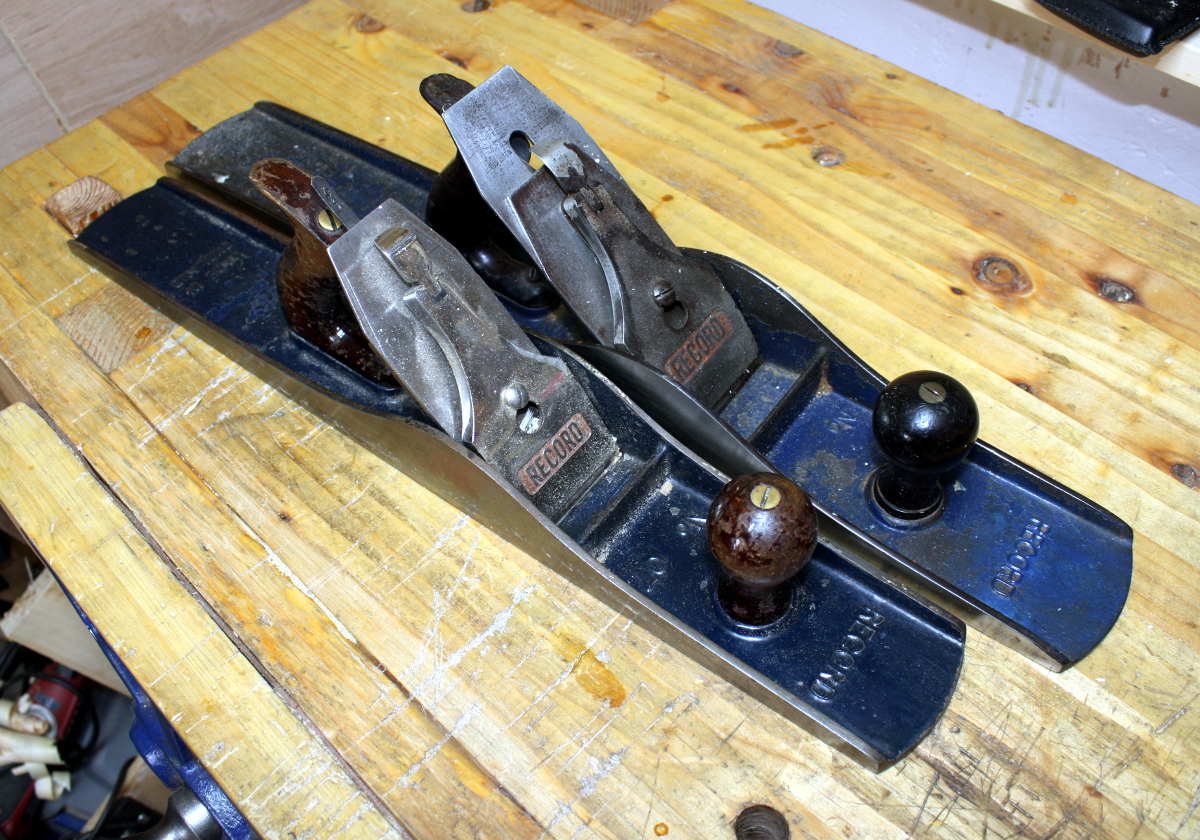 Just that bit larger than the #7, so handier for some things. A tad rusty though and the paint had worn through in places. Well, sod collecting, I want a usable tool so… 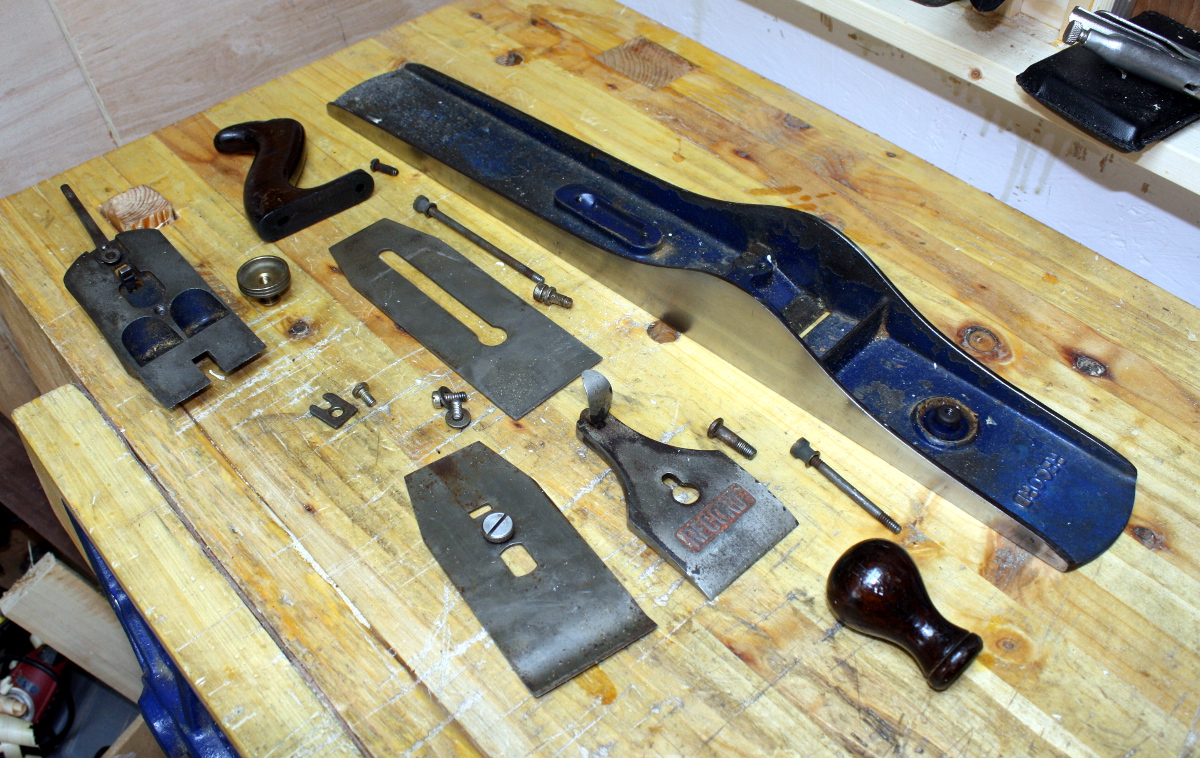 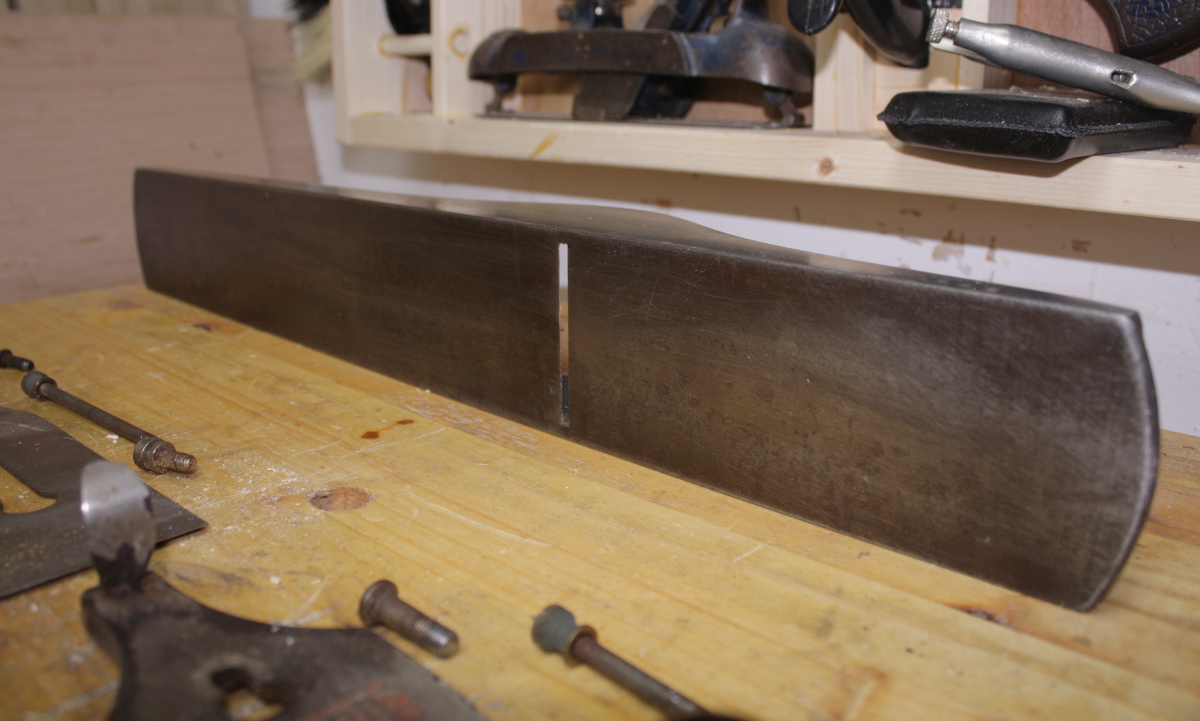 Then out with the newly mounted wire wheel on the bench grinder and off with all the accumulated rust (and I tidied up the #6 while I was at it, as someone had painted that thing almost purple in the last while and it annoys me). 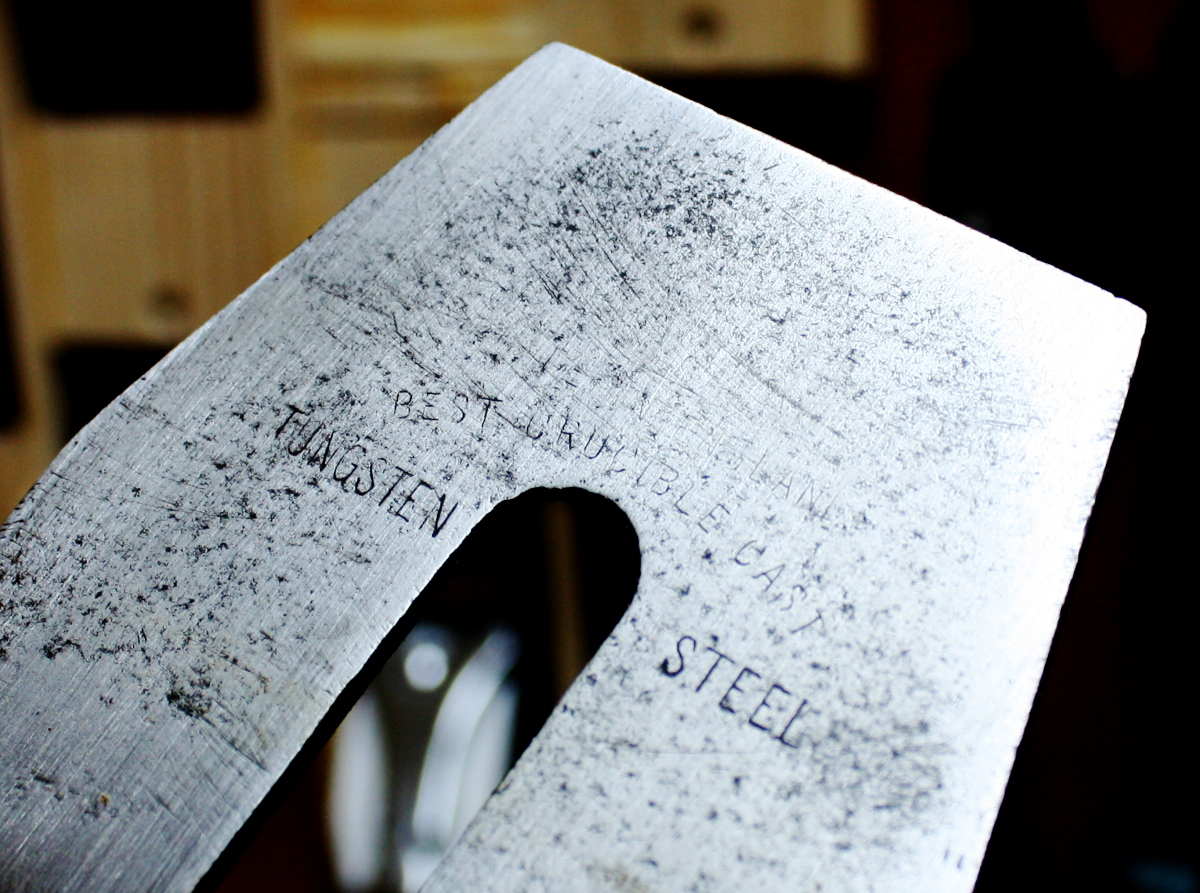 A bit hard to read but “Best Crucible Cast” there indicates that this is one of the better blades Record ever made. And the sharp corners suggest this is laminated but I’d have to grind the bevel off to find out and I’m not that curious.
Then out with the heresy Hammerite paint and sprayed both the #8 and the #6 (I may redo this if I ever find a decent source of the original Record colour, but I seem to recall it was oven enamel and that’s a bit of a faff).

Then we had a hurricane and work had a Thing and so it was left drying for several weeks all told. Yikes. So this weekend, back out to the shed, tidied up a lot, reassembled both planes, spent a while taking rust off damn near every tool (the shed’s damper than I thought and the felt in the tool racks now counts as a Bad Idea) and oiling them (WD40 at least) and finally… 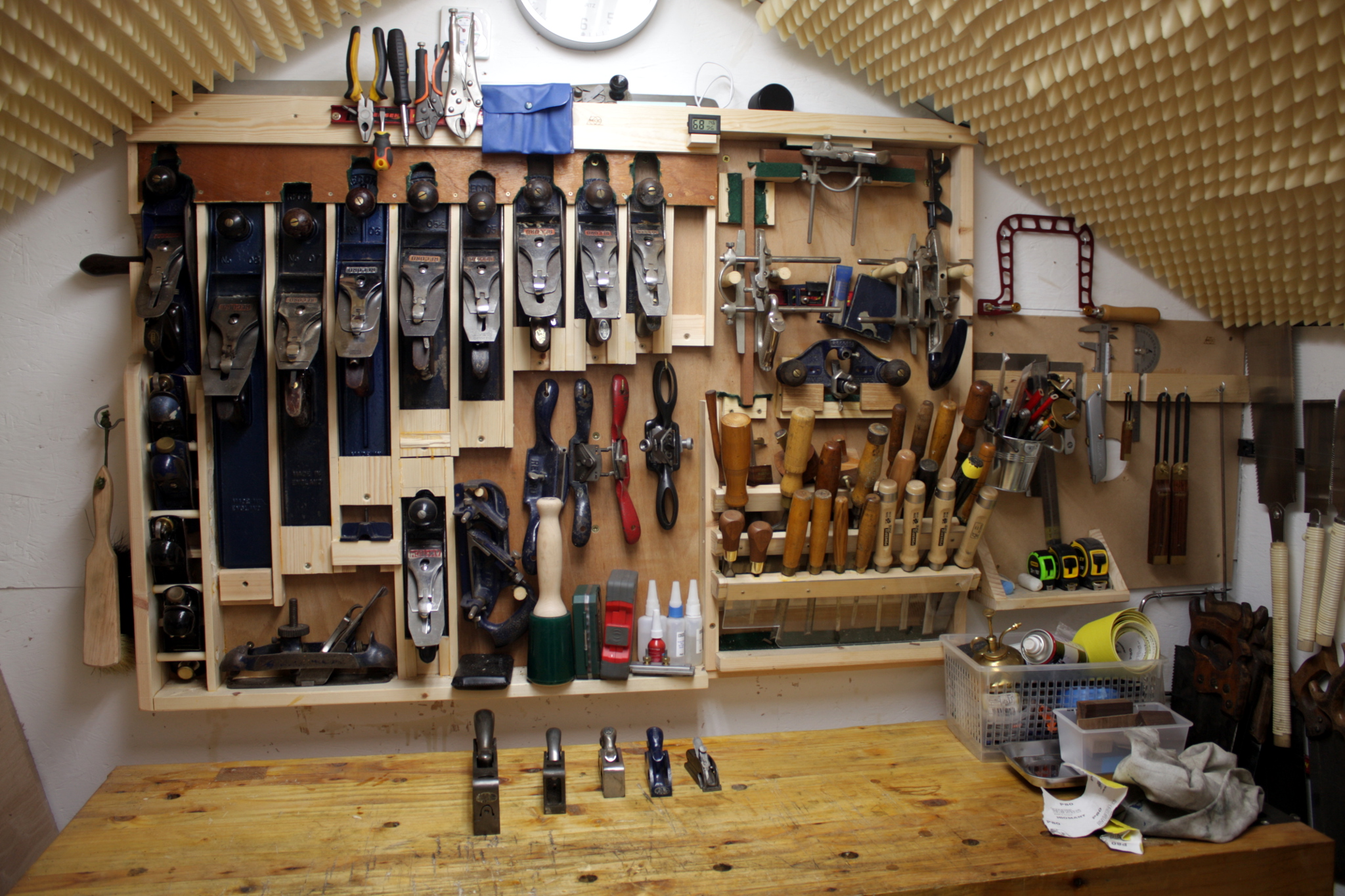 See that little spot? There? That one? 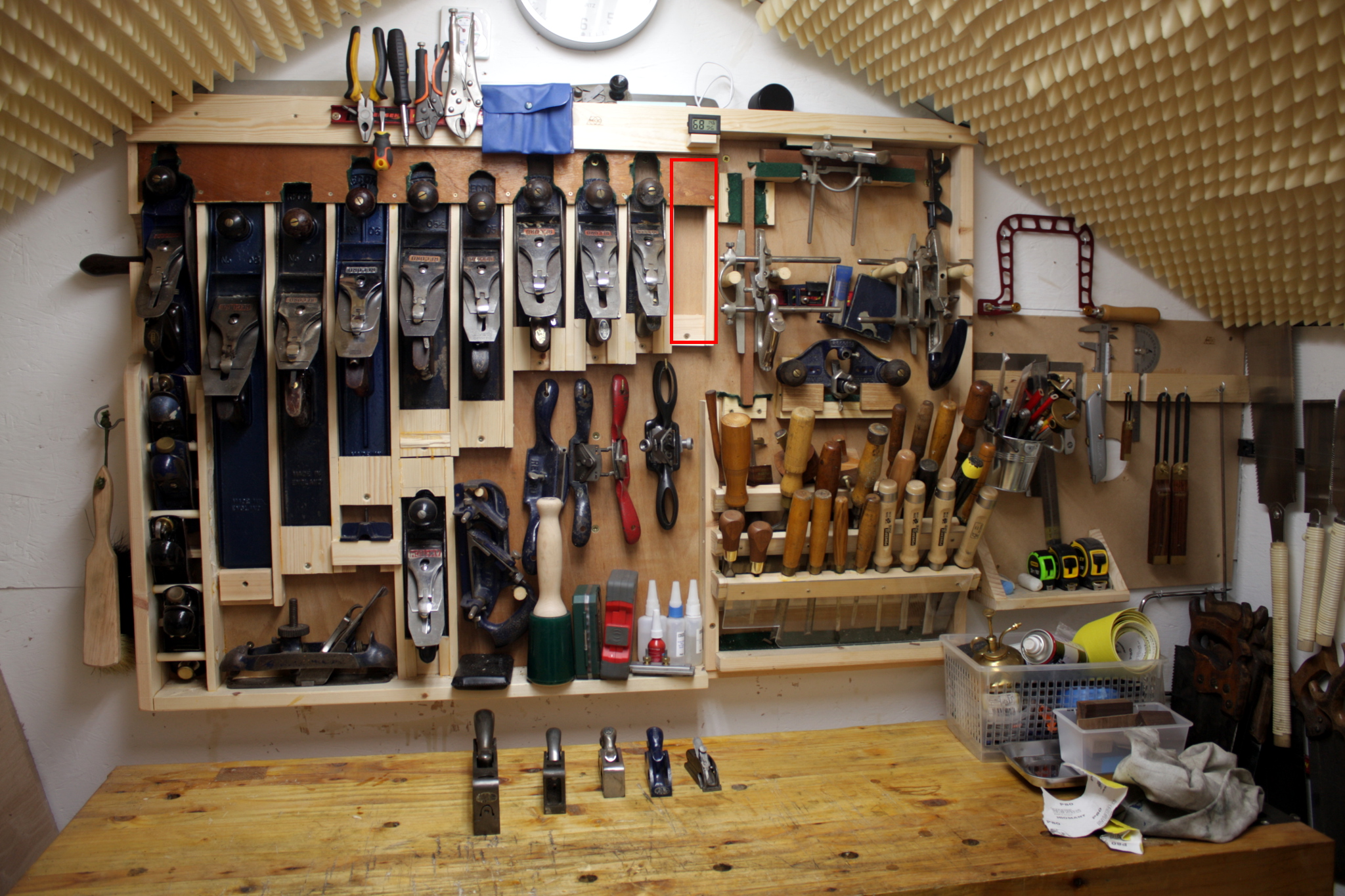 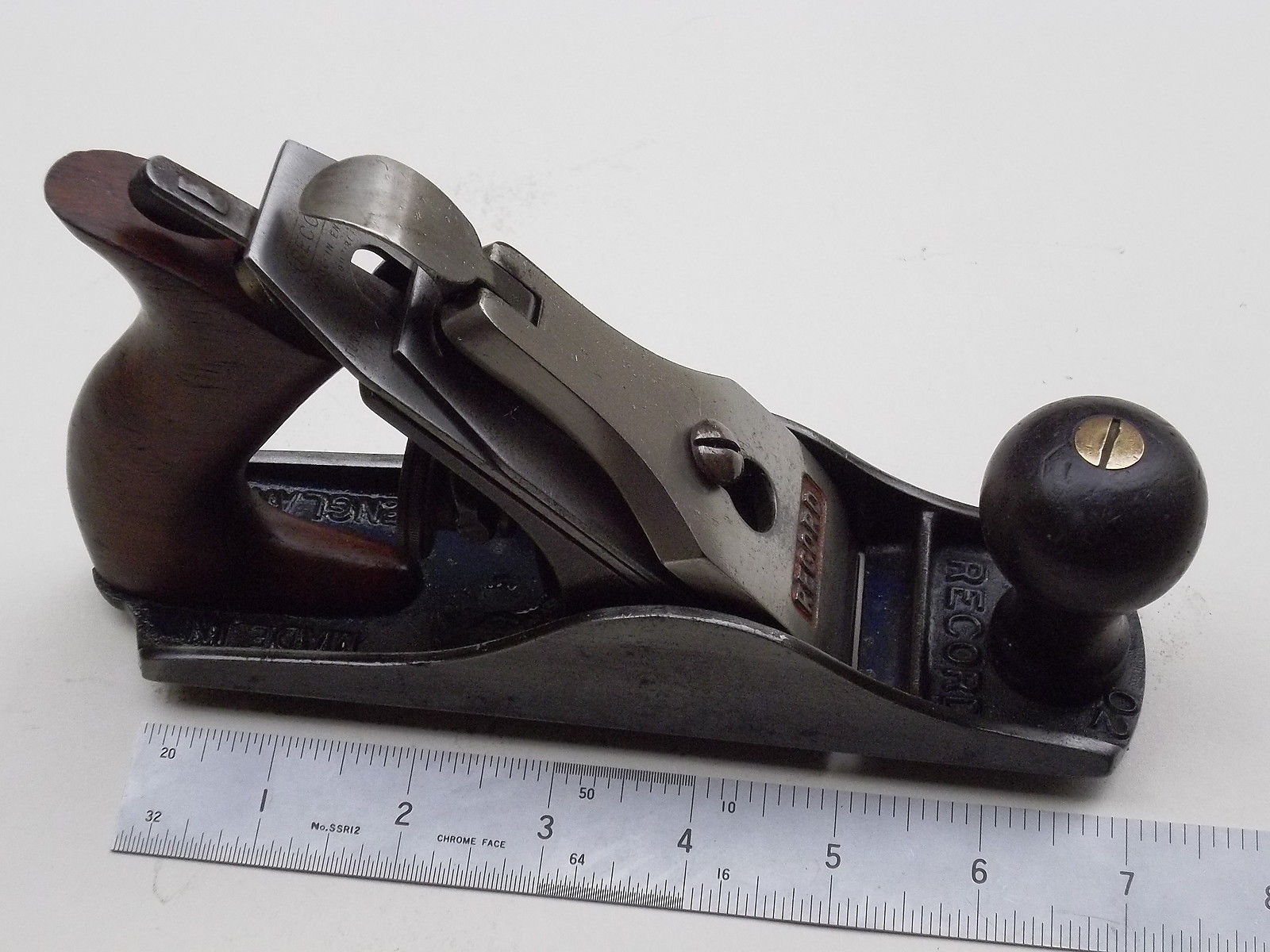 They never made a #1, Stanley did that and these days those go for five-figure sums to collectors. But Record’s #2 still goes for stupid money, when you can find them at all. They didn’t make as many as they did of the workhorse #4s and #5s or even of the fancy #7s and #8s and when the second world war happened they went out of production in a hurry – and when there’s a war on, lots of metal gets melted down to make gun barrels and the #2 was a small smoothing plane for fine work; nobody really had a use for them that a #3 couldn’t fulfill so off to the crucible a lot of them went (same happened to the Stanley #1s). Oh well. They’re not as crazy as the Stanley #1s, but the last time I saw one on ebay, it sold at the asking price of almost €400 within 12 hours of being posted.

Yeah, that slot’s staying empty for a while longer I think 😀