One of those days

Feels like lots of work for not much progress really.

Started the day driving to woodies and buying a plank of pine to put a shelf in the new garden box to get the lawn seeds and chemicals and stuff off the floor so it’d be less cluttered, and buying a padlock so the newly organised chemicals were out of junior’s reach.

Then finished off the hammer holder. 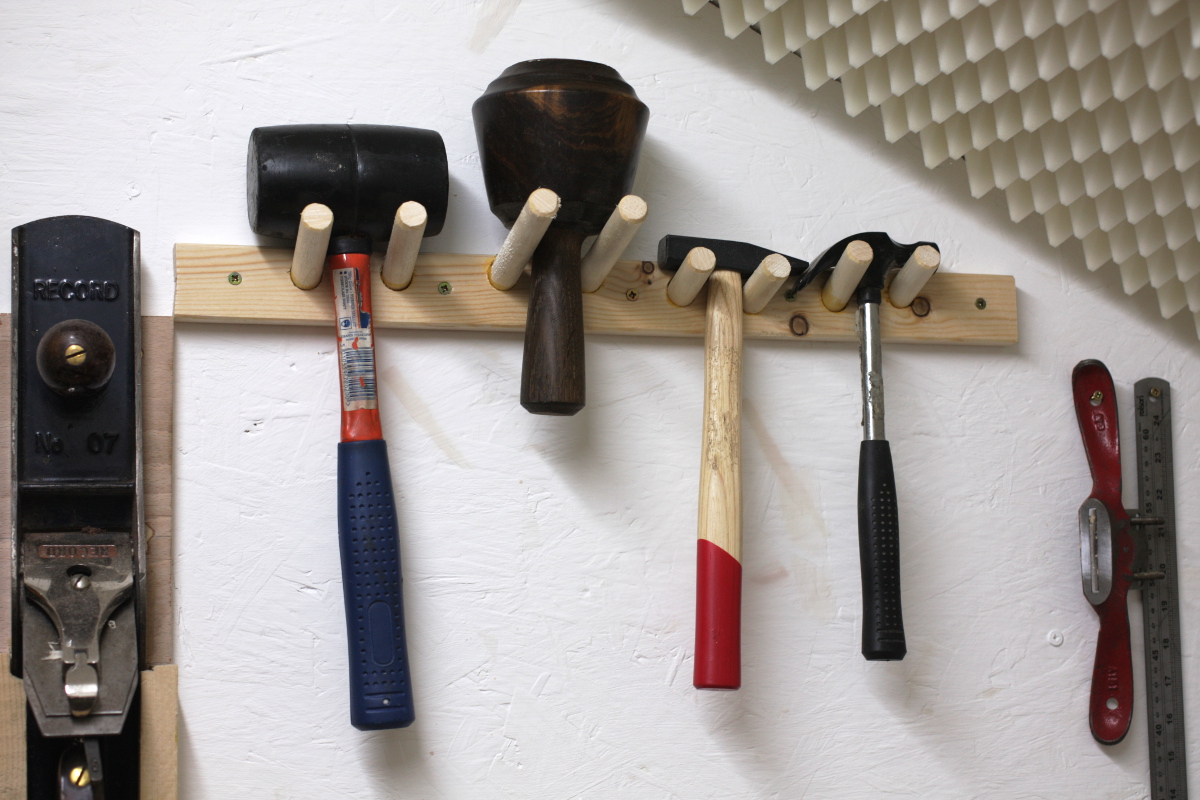 And then immediately remembered the other two hammers sitting in a box in the kitchen waiting to come out to the shed. Feck’s sakes…

Then took the frame and the door off the shed, and fitted better hinges than the ones that were on it, learning as I went just how much expense was spared when building this shed. Honestly, I’m rather surprised it’s still standing, it was so shoddily assembled. But I got it re-hung on the new hinges after a lot of faffing about to get it to swing cleanly, and then I moved on to changing the hasp from a simple bolt to a van lock type of thing.

Which wouldn’t fit. At all. I’d have to hack a four-inch section out of the door frame altogether and even then I’d have to take down the interior wall to fix it properly. By the time I found that out though, I had three new 8mm holes drilled in the door. Ugh.

So I reassembled the old crappy hasp, putting screws in all of the screwholes this time just to be wild and carefree about it, and I’ll have to go order another one off ebay tonight. There have been some burglaries around here over the last year or so, no point tempting fate.

So after having wasted half a day on that, we then had the trick-or-treaters round for a few hours, and took junior to see his first fireworks, which was fun.

By now I’m starting to realise I’ve spent a four-day weekend working on the shed and the crib hasn’t seen much progress. So feck, it’s dark and I can’t get the jig built. I can at least resaw a slat. My new Tyzack 1900s era saw arrived in the post on friday, with a set of teeth on it like it hadn’t been sharpened since it was made. But here’s my new Bahco saw file, one of the best saw files available today according to everyone from Paul Sellers to all the youtubers who copy his stuff ad nauseum (with their own added errors just for fun). 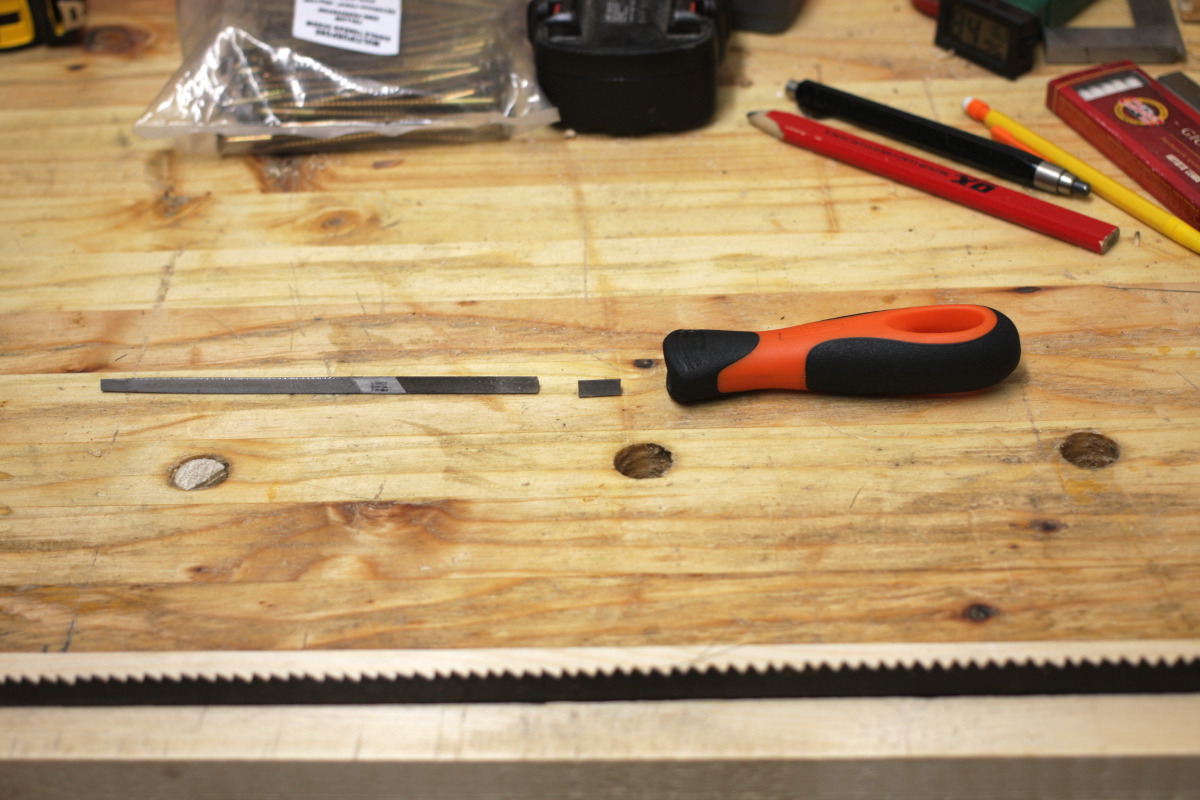 If this is the best saw file available today, I think we’d better get used to disposable hardpoint saws.

Despite the thing snapping within the handle not just once, but twice, I eventually managed to get some sort of sharpened teeth on the saw (but honestly, I’m going to have to file them all off and recut them from scratch sooner or later, they were in brutal shape), and I resawed one slat with the new saw.

Or rather, I did half of the resawing with the new saw. It does cut, and it’s more steerable than the ryoba if it drifts, but it’s horribly slow by comparison to the ryoba so in the end I just gave up and used the ryoba on it. I don’t know if it’s the teeth on the tyzack or the kerf or what, but it was dog slow getting through that ash. And it splintered the corners on the exit quite a bit, it was not a clean cut. I should be able to use both slats but only because I already finished one face; there’s only enough margin to clean up one face from the cut, it was that bad.

And that’s it. Four days off, one lath resawn to give two unfinished slats. This was not the kind of day that leaves you feeling like you’re making progress…

Tidying up and small jobs

Didn’t get the jig built. But did get the lawnmower and a lot of other annoying floorspace eaters cleared out to the garden storage box, so I’ve now gone from this: 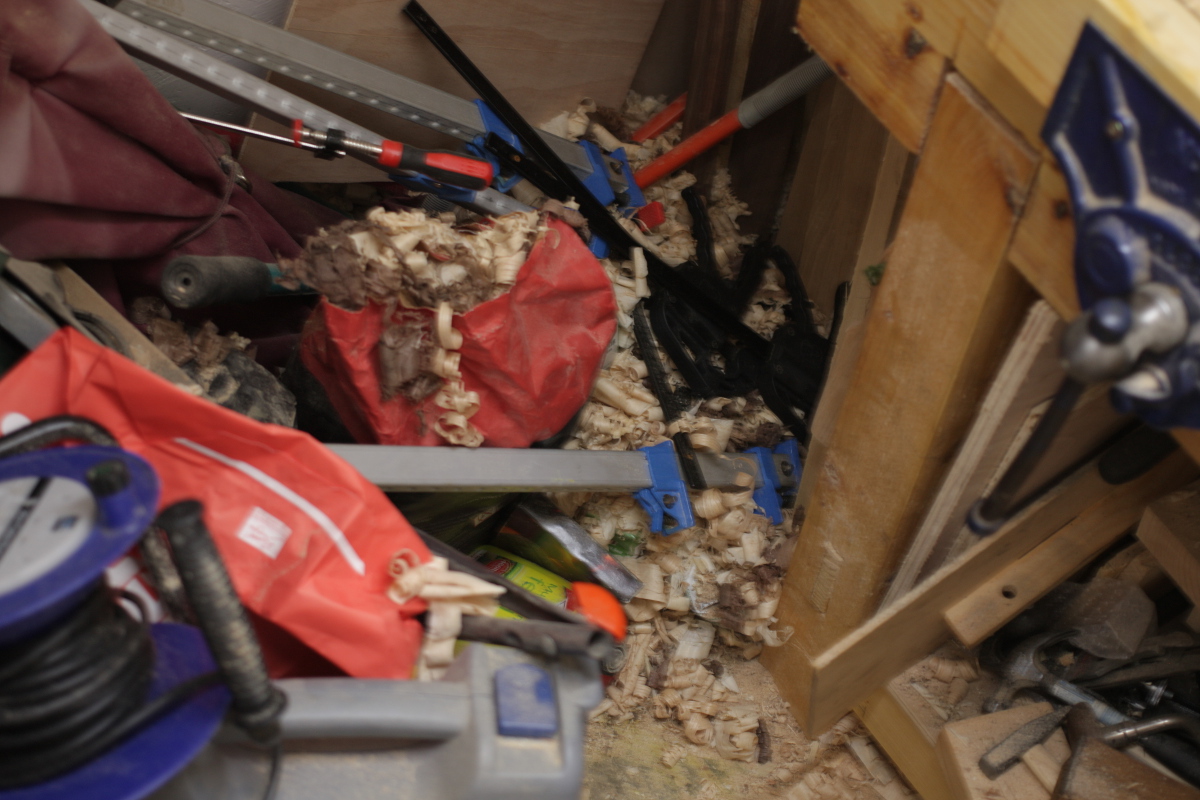 being under my feet to this: 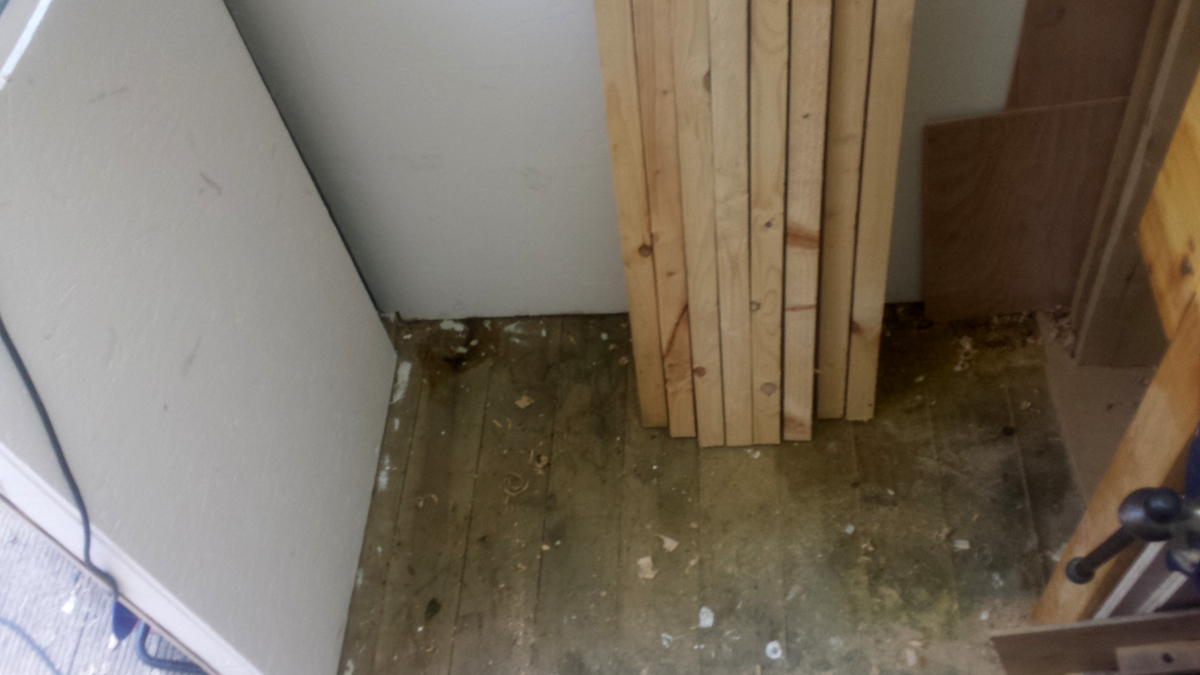 Mind you, while getting that done other stuff had to be moved about so for a while, this was my bench… 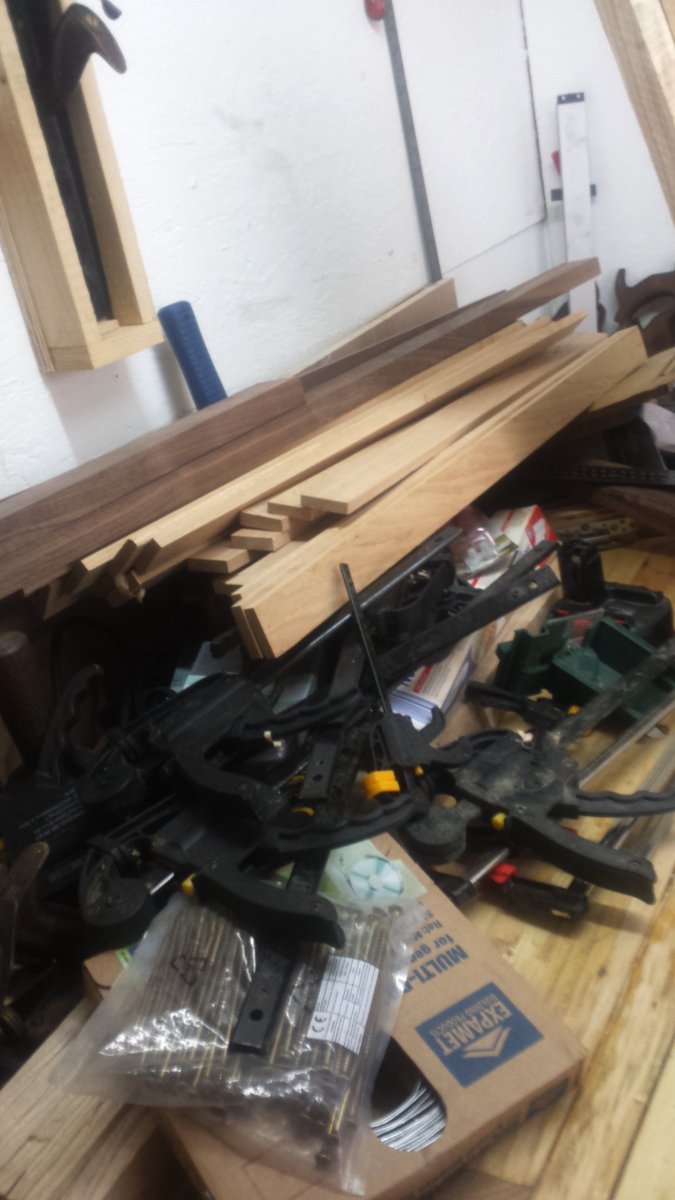 So not ideal. I finished breaking down almost all of the boards from friday (there’s still one 6’x6″ walnut board I haven’t cut yet) and stacking them and generally doing small bits of tidying away (like putting some mdf on the floor under the timber because that floor looks manky): 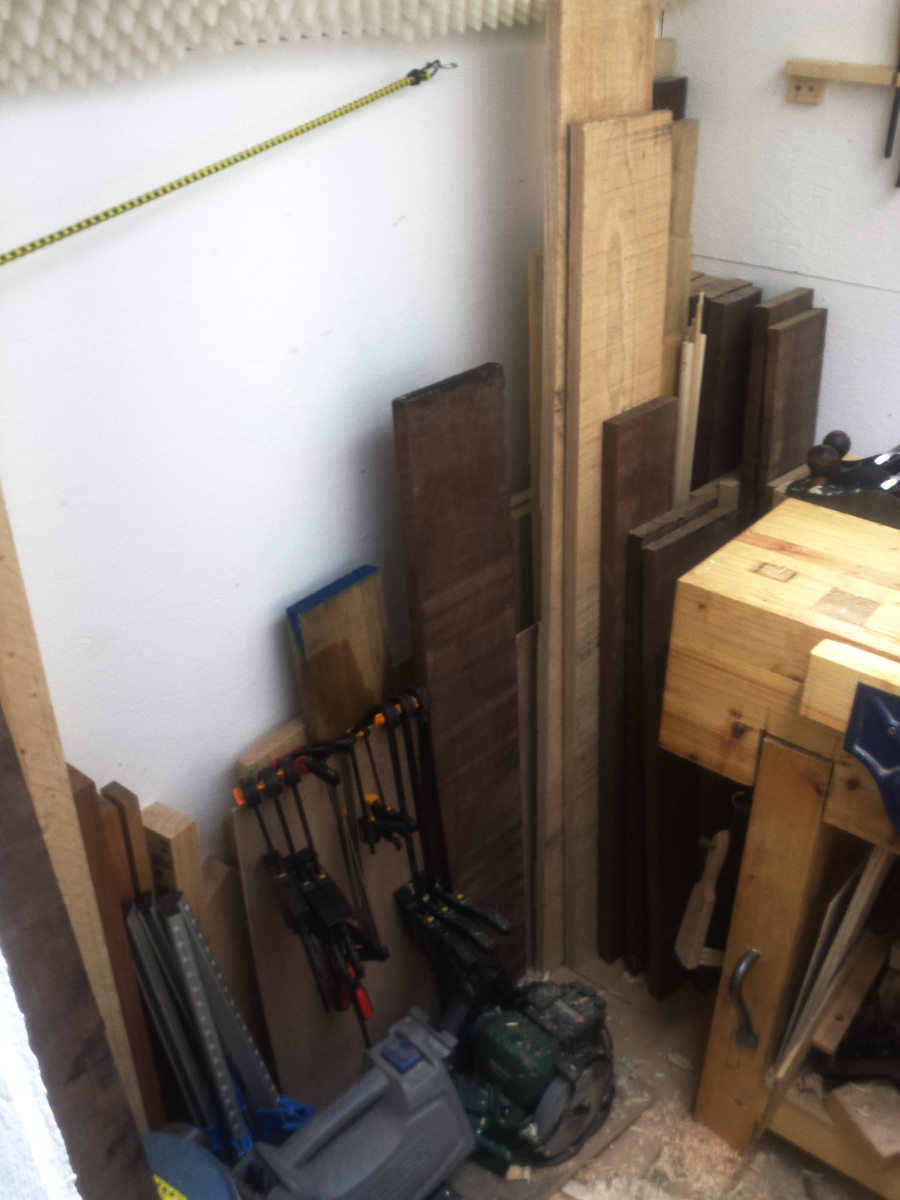 So a little crowded again, but the dremel, the bench grinder and air compressor are all going up on french cleats on the wall or elsewhere in the shed, along with those clamps; and as to the wood, well, that’s three or four projects on the go so it’s not just sitting around taking up space, it’s raw materials. I can live with that.

Still way too small a shed though.

And then I started trying to get some more things off the bench to free up more space. So the holdfasts finally got storage holes in the legs… 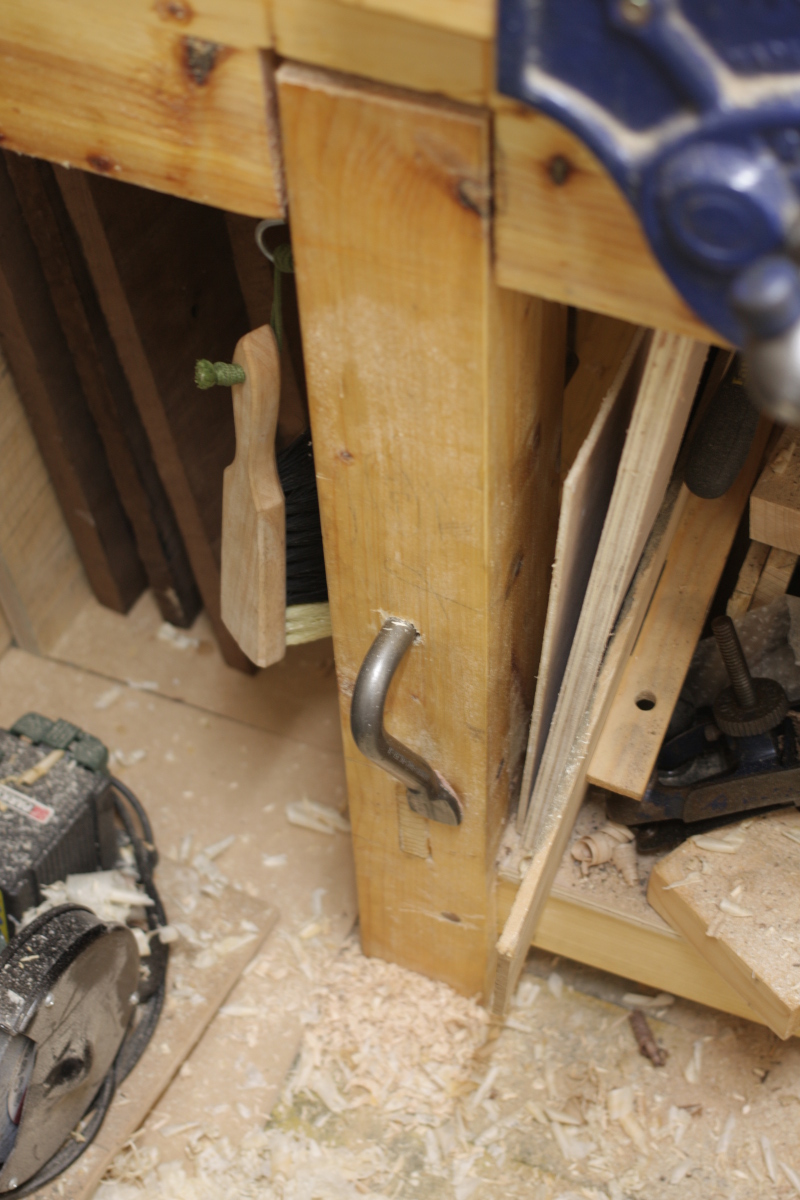 (I couldn’t drill a second in the right leg because there’s a tumbledrier in the way. Don’t ask).

And the scrapers finally get a small holder to get them out of the way and kept together. 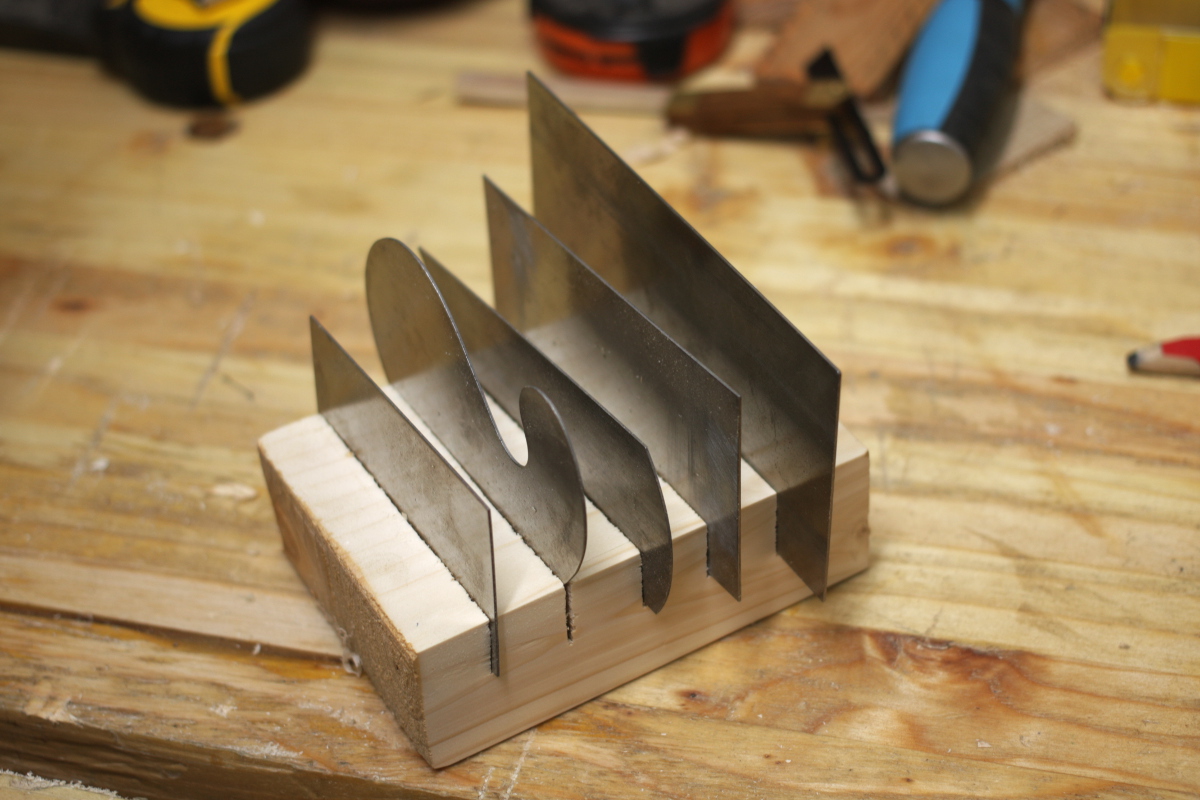 And last small job was to get the hammers off the bench and onto the wall. So a small lath of 2×1 and some holes drilled at a 15° angle and some 18mm dowel and glue gives this work in progress: 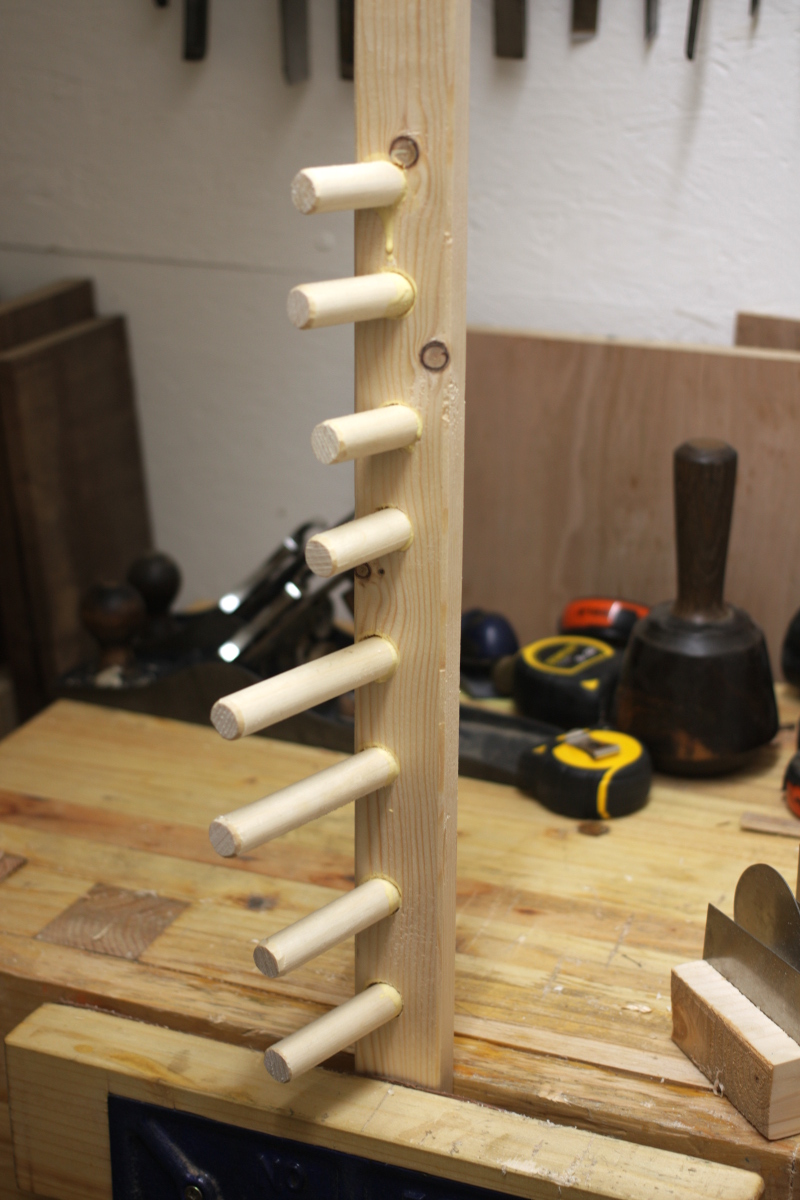 I’ll let that cure overnight, then drill some pilot holes down from the top of the lath through the dowel centers, and drop a screw down the middle to add some strength, then chisel and plane the back flat and screw it to the wall. Then I’ll hang the hammers on it and hold my breath…

Shop till you drop

It’s been one of those consumer weekends so far. Friday was the trip to the timber yard (and would have been another trip to go buy a plastic drum for dust collection, but they weren’t open); and today was a trip to B&Q to buy one of these: 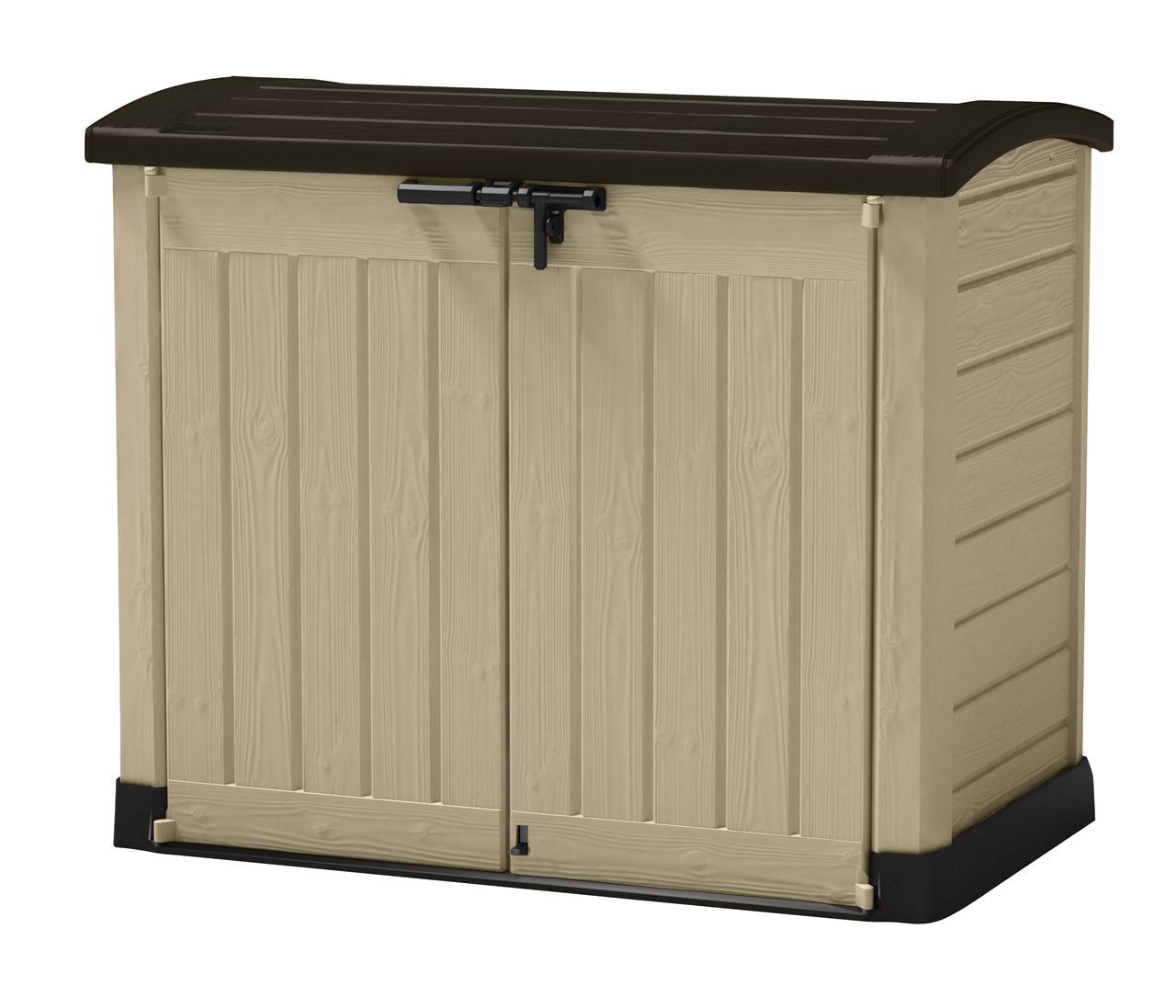 Yeah, I know, it’s plastic, but it’s cheaper than you could build one for. Tomorrow the lawnmower and garden tools and a lot of this muck are going in there:

After that, I might be able to actually stand in front of the vice for rip cuts…

And then there was the testing of the mattress for the cot, for which we roped in a volunteer… 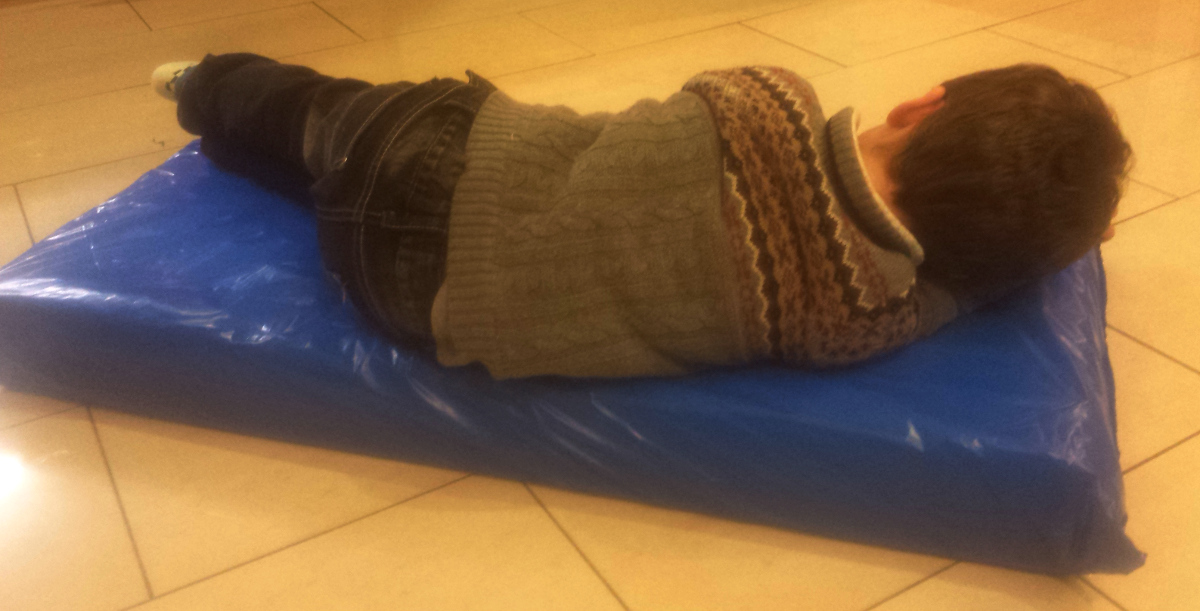 It was deemed to have passed inspection.

And lastly, I solved yesterday’s storage problem with the vigorous application of a circular saw (yeah, yeah, power tools, I’m unclean), and now I have a stack of rough-cut parts for two or three projects. 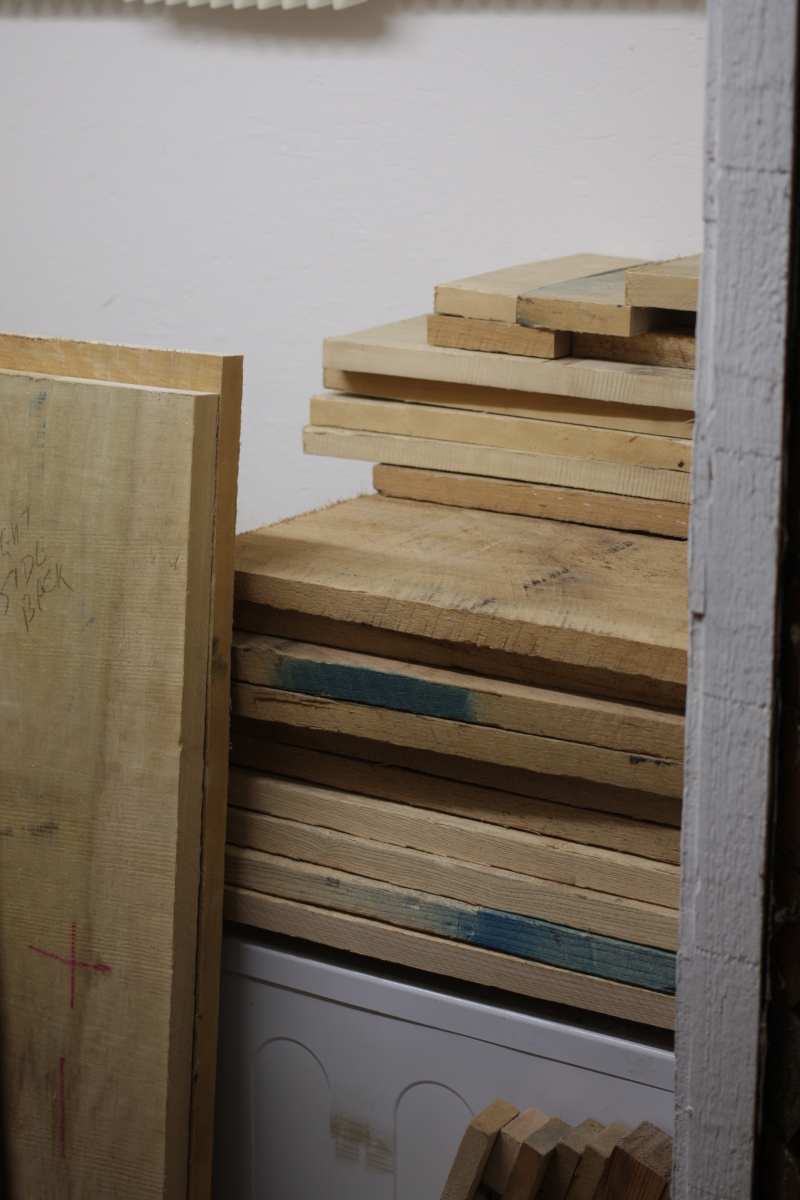 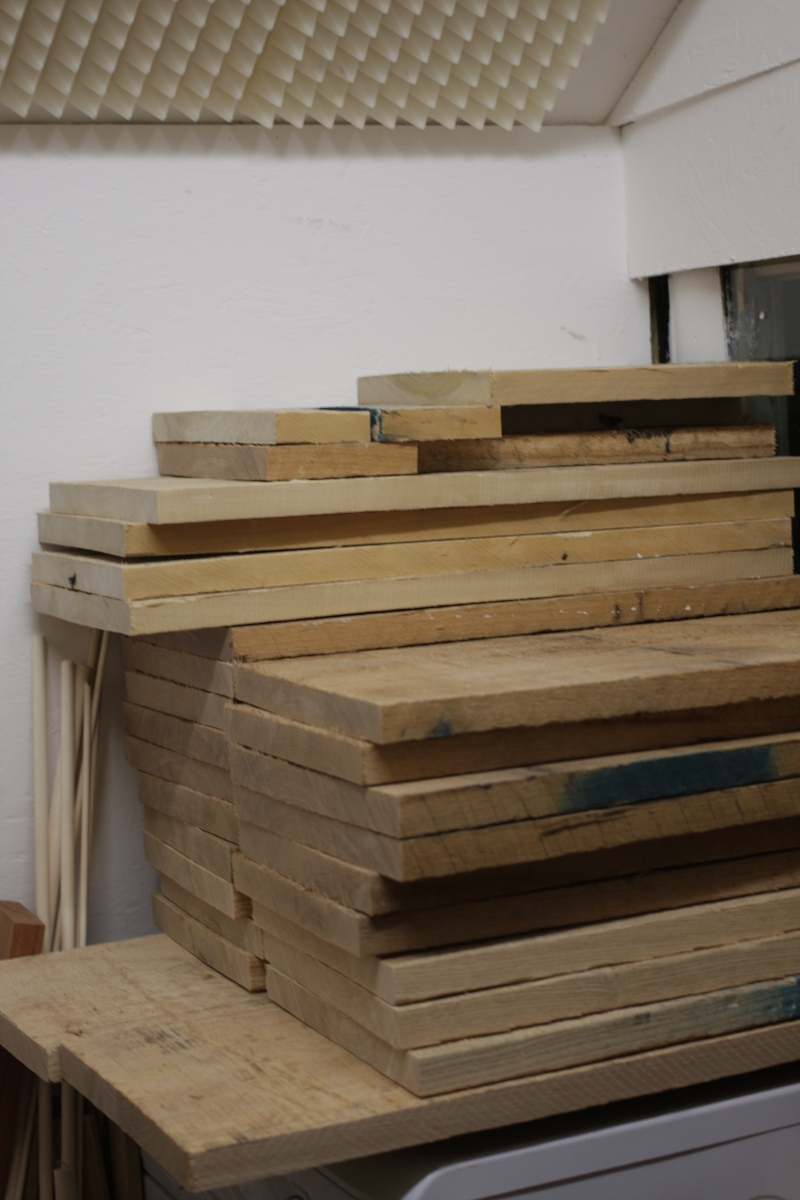 There are still a few 5′ and 6′ boards to stack, but I can manage those, just about.

And with any luck, I might get back to project work tomorrow sometime, and get the steaming jig rebuilt, a drying jig built, and if I’m fast, get one of the walnut frame pieces steamed and bent.