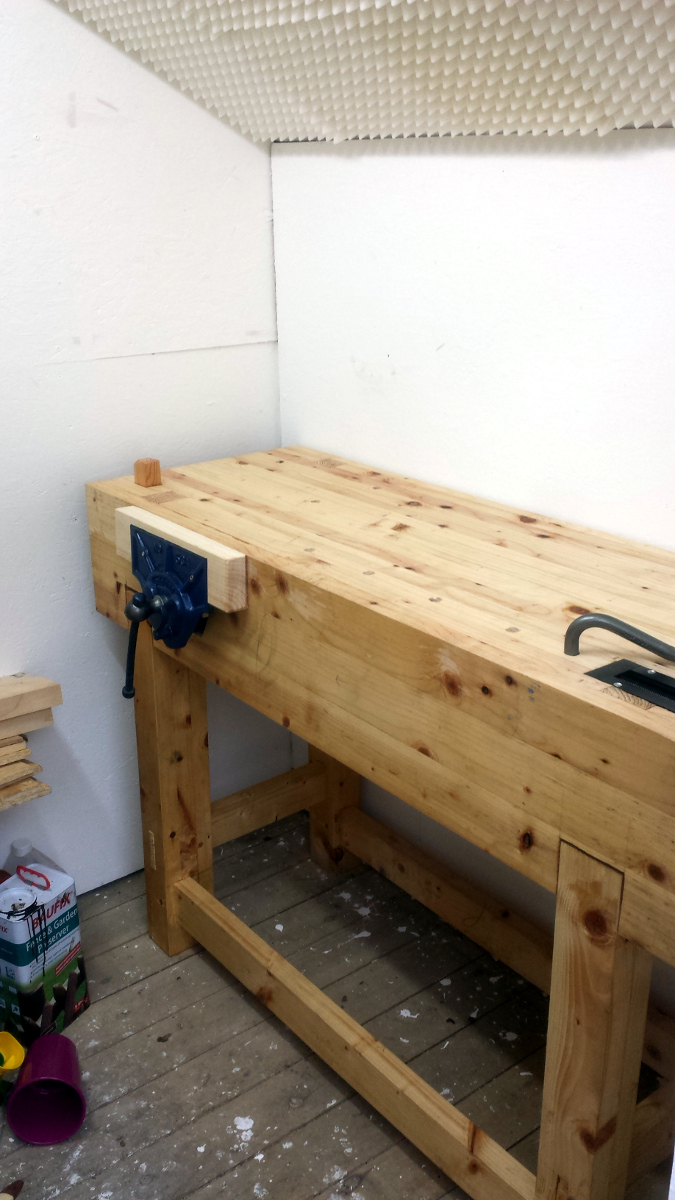 Forecast says dry till the afternoon, the TDL is short and Herself and Junior are off for a skite in the big schmoke, so time for the last push…

Got the inset vice and sullied the bench once more with power tools using a drill/driver to screw the vice into the bench. Then got the offcut bit of 2×4 that I’ll use for the jaw of the face vice (for now at least, I might replace it with hardwood later) and used the holdfasts and inset vice to chamfer the edges and clean it up a bit (holy carp, but woodworking on a proper bench is just night and day from fighting with a black&decker workmate).

Put the jaw in the vice, leveled it up roughly with the benchtop and marked off where the vice face met it, then chopped out a half-inch mortice in it to let the vice slot into it. Then got out the suede I’ve been saving for this since… wow, way too long. And if you’re putting suede on one thing, might as well do everything so I got the other holdfast and the end vice dog as well. 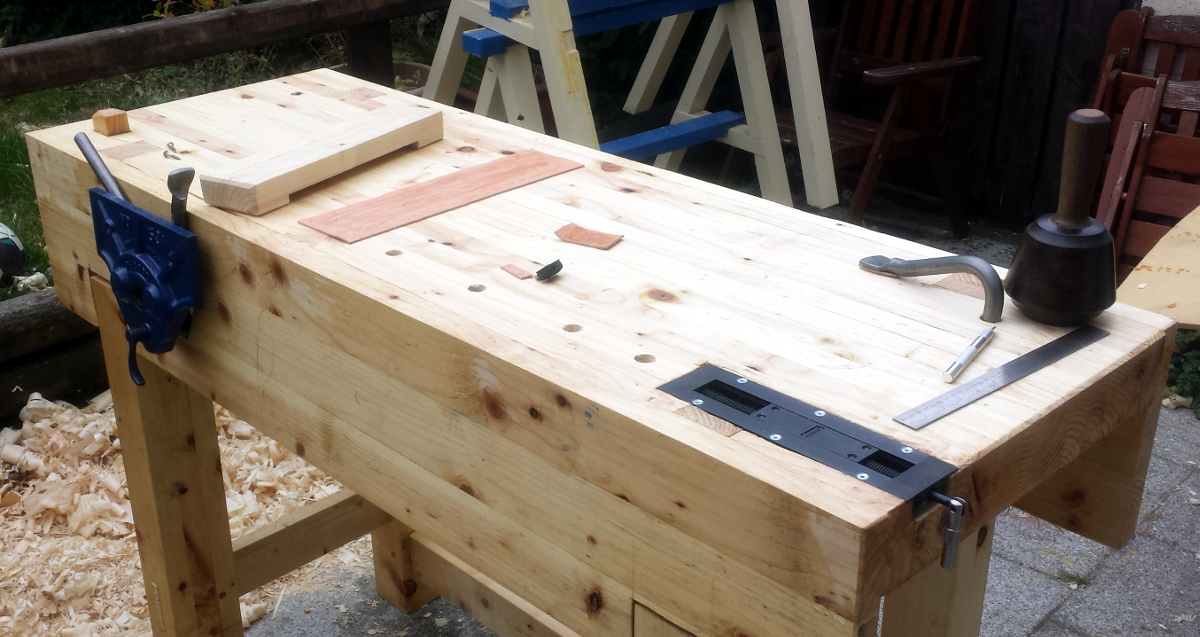 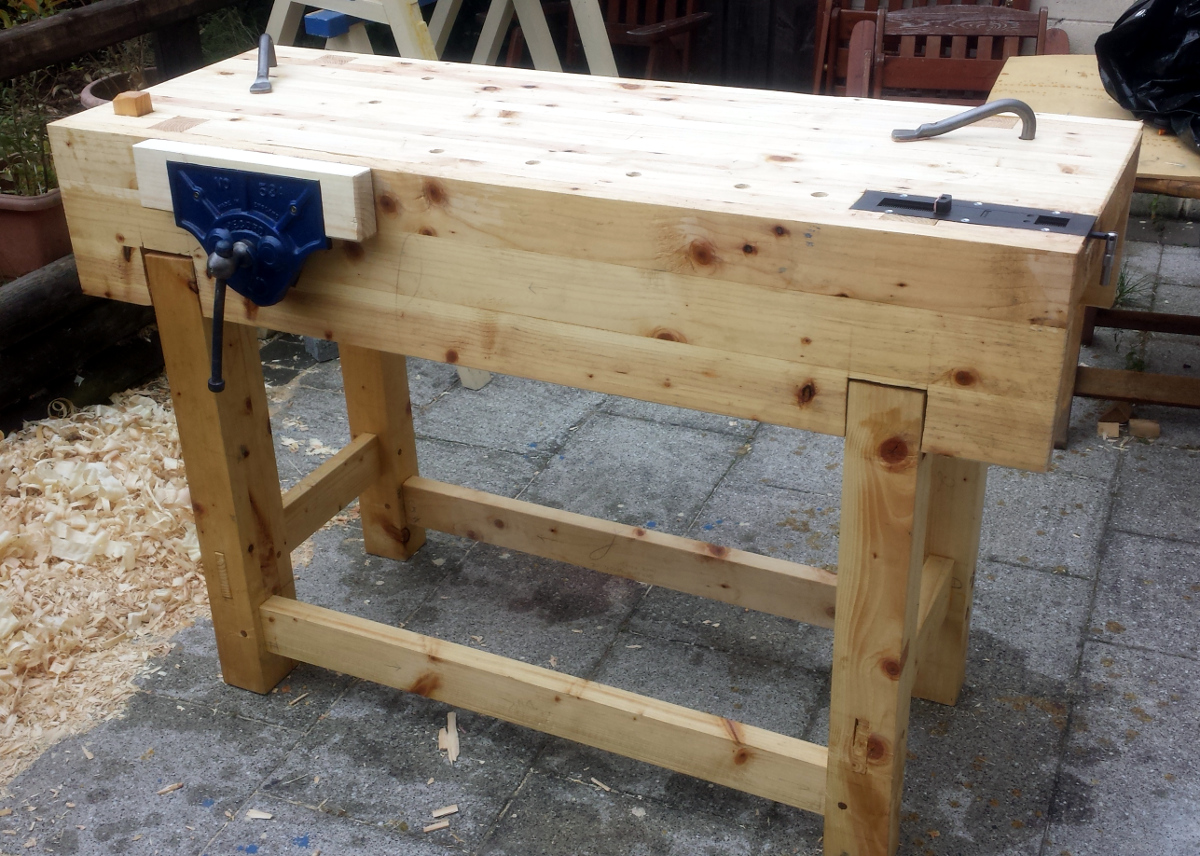 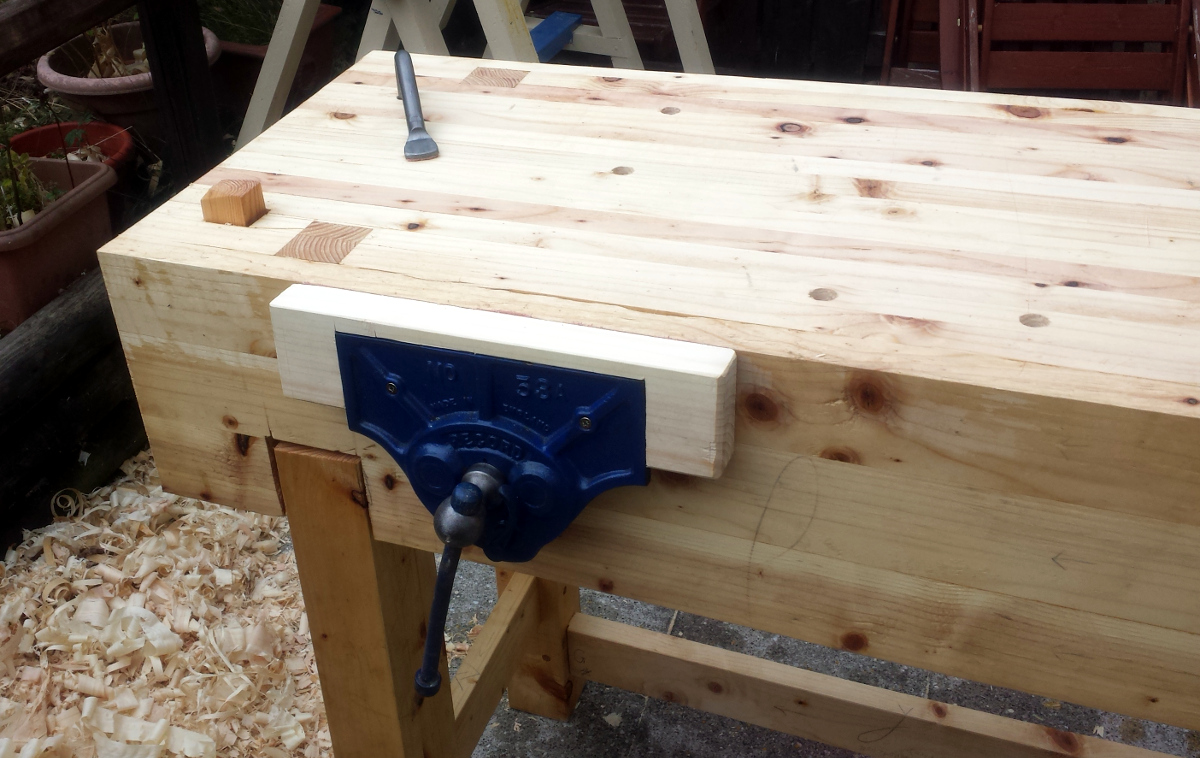 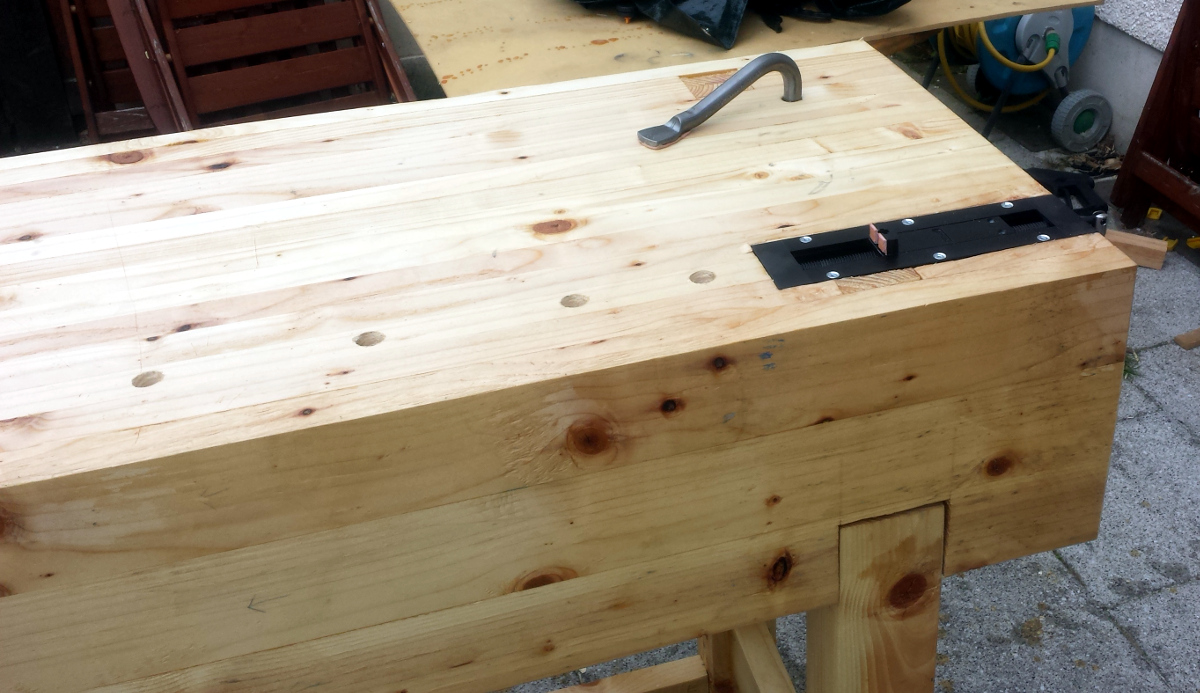 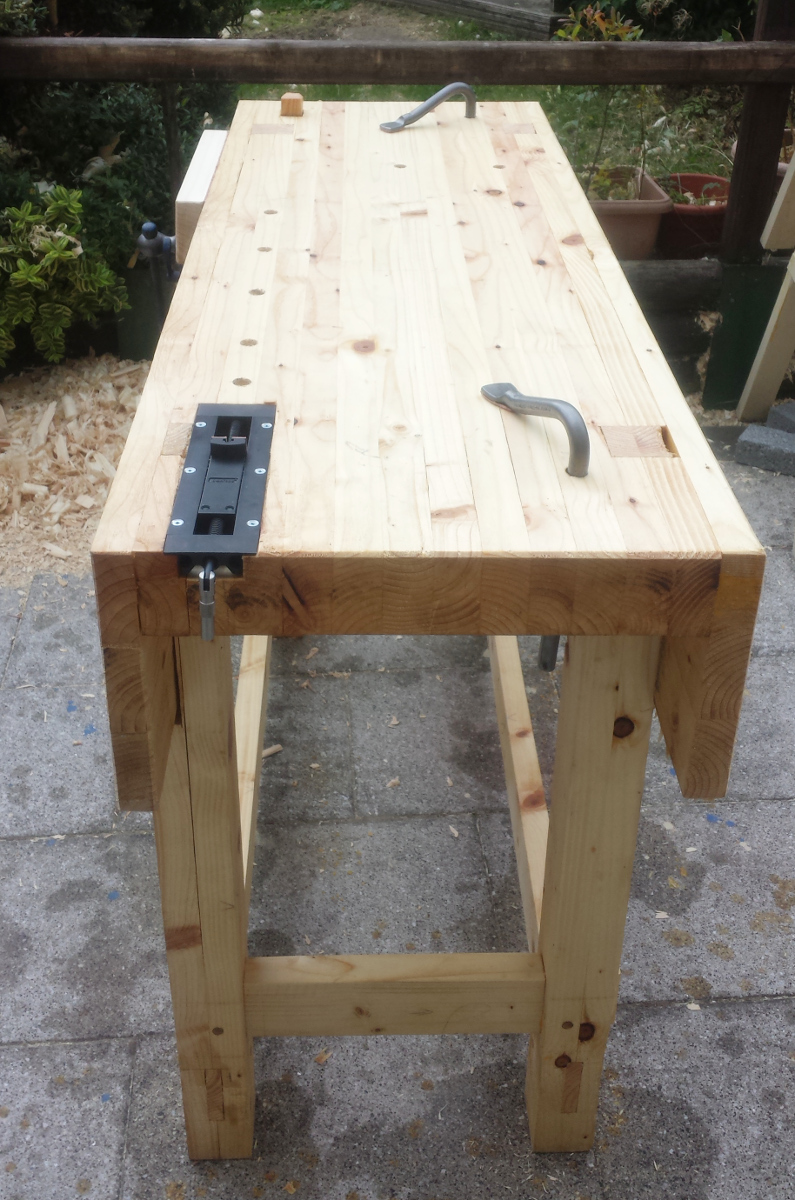 Even the little fiddly bit in the veritas end vice. 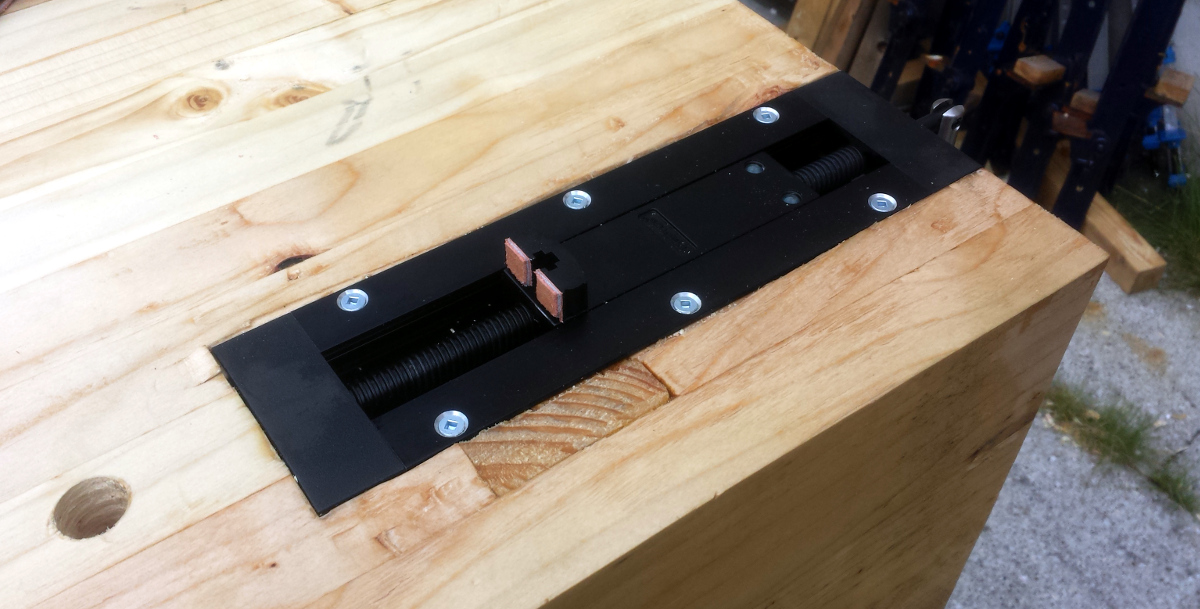 I’m showing that in all it’s prettiness for a reason, bear with me…

Also, that’s a monster of a face vice. And I love the sawdust shield for the screw. Gotta hand it to the lads who built this thing, they knew their stuff. 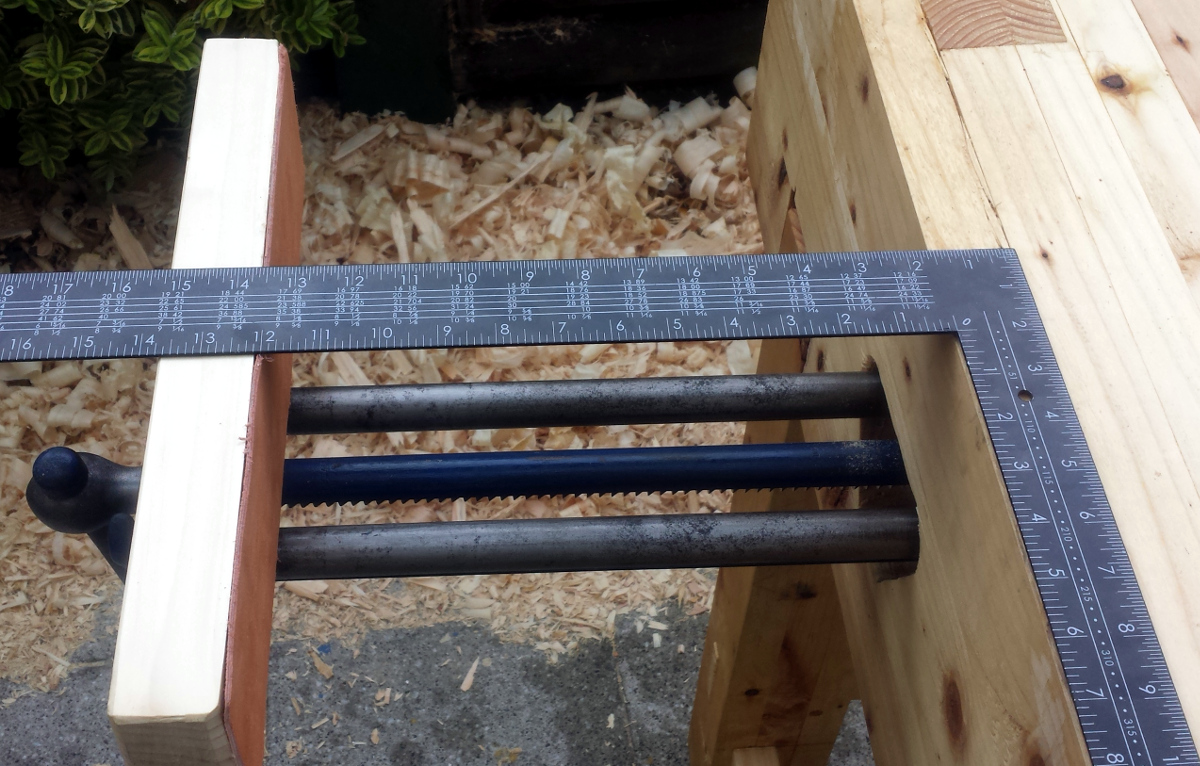 The overall bench dimensions wound up being 60″ long by 21½” wide by 39¾” tall, and the benchtop is 3⅛” thick, which is 2½” narrower than I’d originally thought it’d be (I’m blaming the so-not-2x4s I wound up getting from the builder’s merchants), but it’s spot on otherwise. Damn sight simpler than the original plans – and if I was doing it over, it’d be simpler still. In fact I wouldn’t even bother with the laminations, I’d just buy 4″ thick red deal and go with that. Oh well, it won’t be the last bench I build.

Mainly though, that’s luck – once I’d gotten it to this point I tried to move it to the shed on my own. Got underneath the bench, put my shoulders to it and lifted, being sure to keep the heavy face vice in front of me… which is when I learned that the vice isn’t that heavy compared to the wood and most of the weight was behind me… and over it went, absolutely no stopping it. I had just enough time to remember to keep my arms and legs inside the frame to avoid awkward snapping noises and with a rather depressing bang, it was over and I was sitting on my rather surprised arse in the middle of a still-intact bench. My next-door neighbour poked his head over the fence to ask if I was still alive, and offered to help move it to the shed to avoid further girly screaming, which kind help I accepted (thanks again Ken!) and we got it into place without further fun and games.

The veritas end vice took the full impact – something like 250lb of wood and metal given a four-foot run-up to the ground – and it still works. I mean, perfectly. No extra slop or play, no funny noises, no cracks in the screw, nothing. The sole evidence is that the last inch of the screw shaft is now bent by about 10-15° and the aluminium handle is a bit scuffed up.

Honestly, my shorts had more damage than the vice. I’m very impressed. With the vice, not the shorts.

And there it is, the culmination of a few months of spare hours here and there and about six full saturdays in total. €175 worth of wood (which gave the sawhorses and the bench), €40 worth of suede leather (only half of which was used), €20 for the record 169 planing stop holder, just over €100 for the record 53A vice, €50’s worth of titebond II (because I hadn’t learnt yet that every single woodworking thing you buy in Dublin has about a 100% markup), €90 for the veritas inset end vice, €40 for the holdfasts and wow was it a mistake to tot all that stuff up 😀 I am so not going near the total I spent on tools before getting free of the tool-collecting bug 😀 I’m just going to focus on how this bench cost me around €500 and a Little John goes for around €1500 (plus the requisite arm and leg for shipping). That’s my story and I’m sticking to it 😀

Thanks everyone for reading and commenting on the thread, it was handy to keep me honest with getting off the couch on lazy saturdays and getting on with things.

Now… time to actually get to using the bench…