So, as before, the first thing to do is to unbox the N9. And, as before, others have done this in a bit more detail than me, but c’est la vie. On with it: 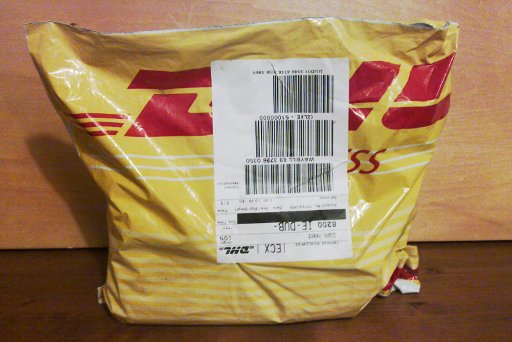 A quick rip, shred and tearing of bubblewrap later, and the contents are quite minimalist: 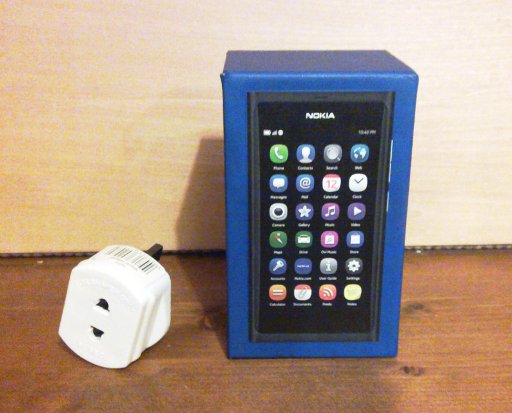 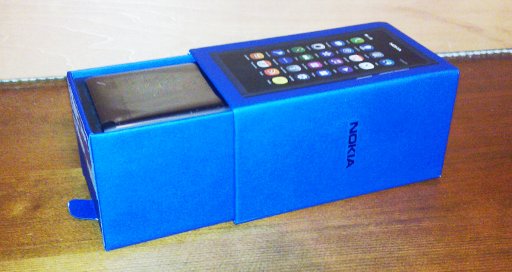 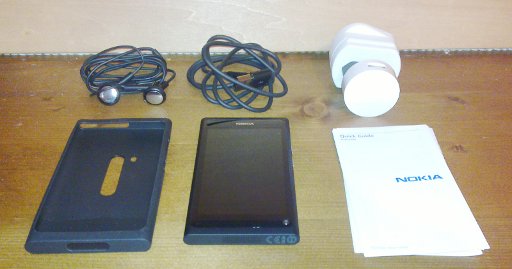 The phone itself, some paperwork, a rubber protector for the case, a USB-to-microUSB cable for charging and connecting to the PC, a mains-to-USB convertor for charging and a wired handsfree headphones set. All neatly packed away, nothing shifting around in the box or ill-protected – in fact the phone itself comes in a sort of all-over peel-off plastic protector.

But enough about the perhiphirals and accessories, on to the phone itself:

First impression? Shiny. Very shiny. Every surface is polished and it feels odd in the hand after the solidity of the N900. It feels as light as, or lighter than, the old e71 did. The way the front panel rises off the surface like a glass blister is a bit odd to the touch for some reason, but the feel in the hand is natural – there’s a slight curve to the back of the phone that sits well, at least in my hand.

It also feels quite different from the N900 with its sliding screen – you get a very rigid physical feel from this phone.

Looking at the sides for controls and ports is a very fast exercise indeed:

Basicly, there’s almost nothing there compared to the N900, which was adorned with ports. You have nothing at all on the left, a multifunction button and a volume up/down rocker on the right, the speaker grille on the bottom and the headphones socket on the top, along with two panels which open to reveal the microUSB charging/data port and the microSIM card holder.

Ah, feck. The N900 uses a normal miniSIM card. How do you review a phone when you can’t use it as a phone?

Well, turns out the difference between a full-size SIM card, a miniSIM and a microSIM is purely physical in nature – cut bits off and you can turn a full SIM to a miniSIM or a miniSIM to a microSIM.

And there are microSIM adapters that will bring a microSIM back up to miniSIM size as well:

So my plan was to cut down my miniSIM from my N900 to a microSIM for the N9 and use the adapter to move the SIM back to the N900 post-trial. I checked with Meteor on twitter and they confirmed that replacing a damaged SIM wouldn’t be a problem. So, out with the ruler and scalpel and scissors and DIY SIM to microSIM template…

Unfortunately, it turns out that Meteor’s SIM cards have odd contacts, and if you use the contact pad as a landmark when deciding where to cut, you get the cut wrong – you have to cut through the actual contact pad on the side opposite the angled corner when doing the trimming. So a second trim was required, and then shimming the now-mangled card back into the holder in the right place:

But ultimately, it worked, and I now have a fully functioning N9 to test for the next two weeks. I’ll follow the same path as I did with the N900 trial – I’ll compare the N9 to the N900 and the e71, field test it for a while to see if it can replace a netbook the same way an N900 can, and generally muck about with it and see how well it does the things I need it to do…