More tidying up. It’s starting to get a bit neater…

Next job, tidy up the panel and grasshopper gauges and put up one of the five(!) magnetic bars I got for the shed walls (if you buy two and bury them in shavings, you’ll forget you bought them and buy them again when they show up in Lidl again).

Little better. Want to tape up the f-clamp handles as well.

It’s just hockey stick grip tape, but it makes it a lot easier to crank on those handles when tightening up the clamp.

Take one offcut of walnut, mark it up for some carved arcading and hack away at it as fast and as carelessly as you like.

Told you so, but that isn’t the point of the experiment. Now I resaw this board in half (I cheated here because this is just an experiment and used the bandsaw but you could do it by hand if you want. Me, the shed was at 4C so I was suffering enough).

And now out with the #05 and plane off the saw marks and get the backs all nice and clean.

So now I have thin stock with “carving” on one side. The idea being to see if you could do this and make a lightweight thin-walled box with this kind of carving in it. I mean, it didn’t shatter or snap on this try, so maybe this might work.

The acid test though, is whether or not these warp or twist or cup in the next few days as they air-dry. Have to check back in a few days…

A few hours in the shed today that felt productive (it’s a false positive; it was just that a few end stages happened at the same time). Started off with the final fettling of the carcass for the locker and then smoothed all the interior surfaces and rounded the corners I won’t be able to readily reach after glueup. 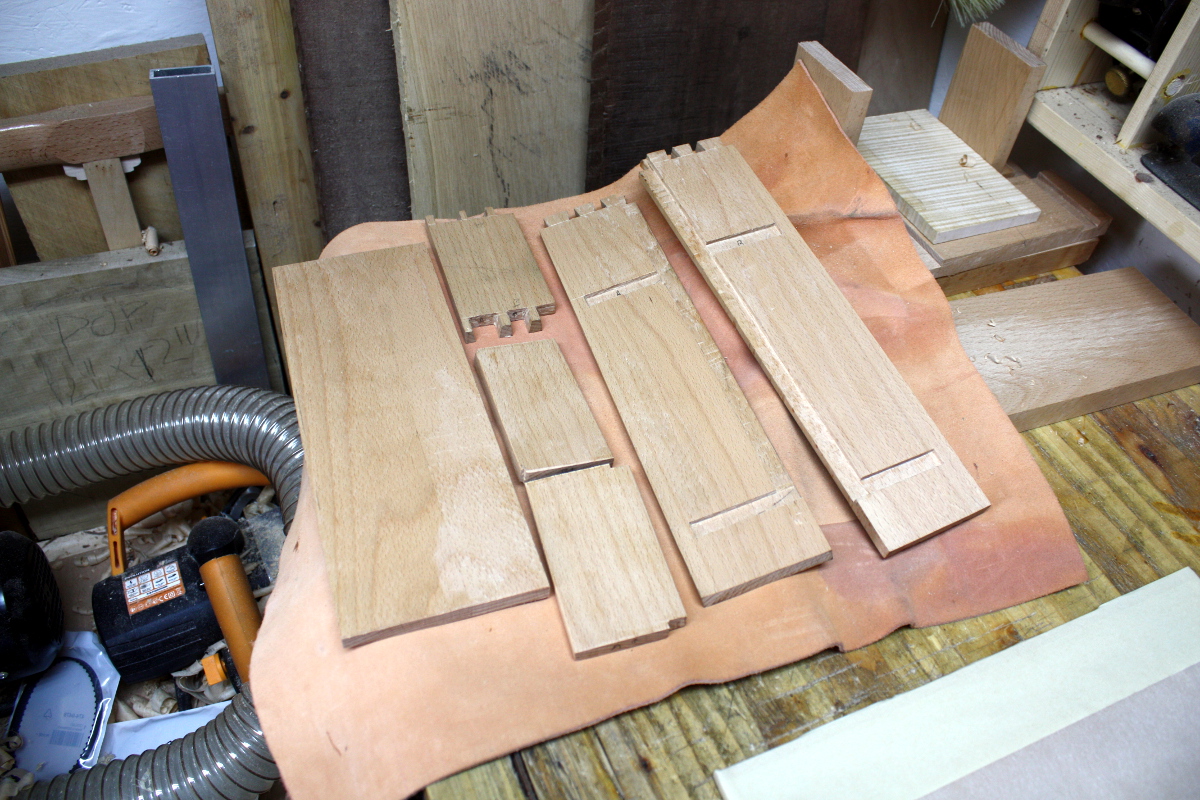 20 minutes with #04 and card scraper and we’re ready to glue up. 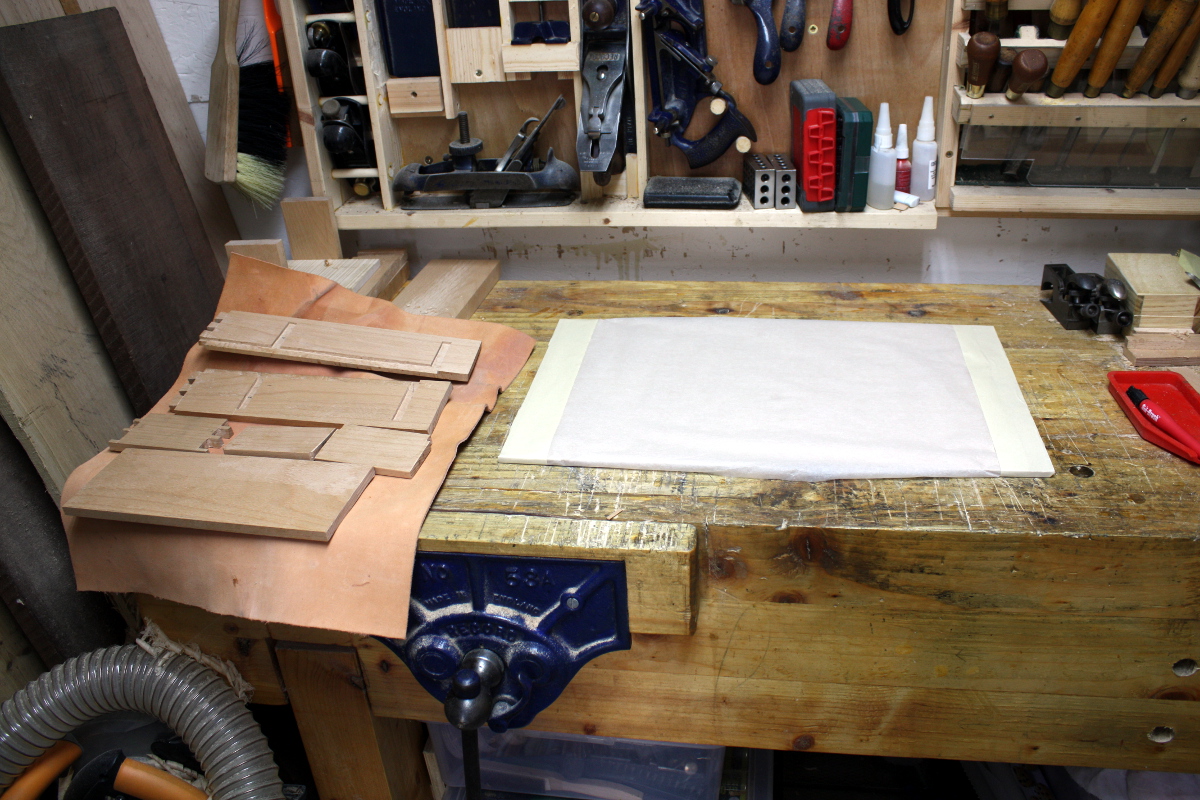 Prepped an mdf surface to assemble on… 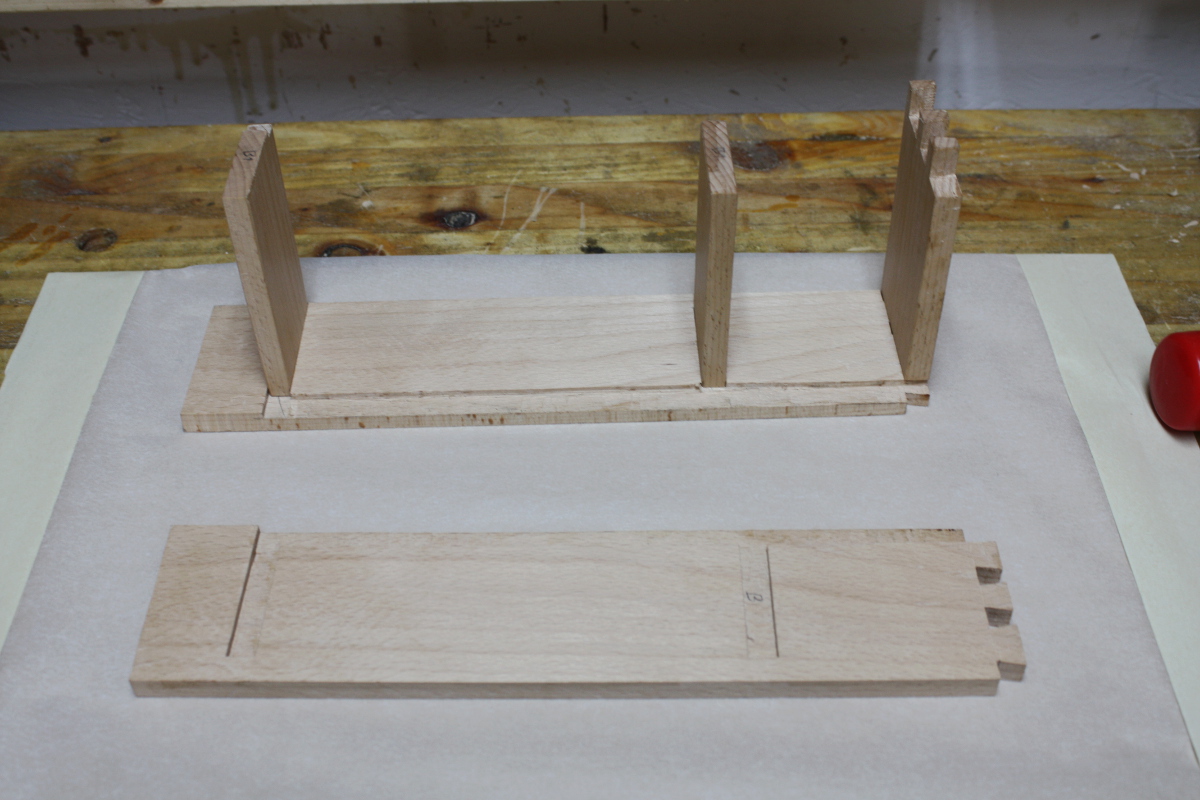 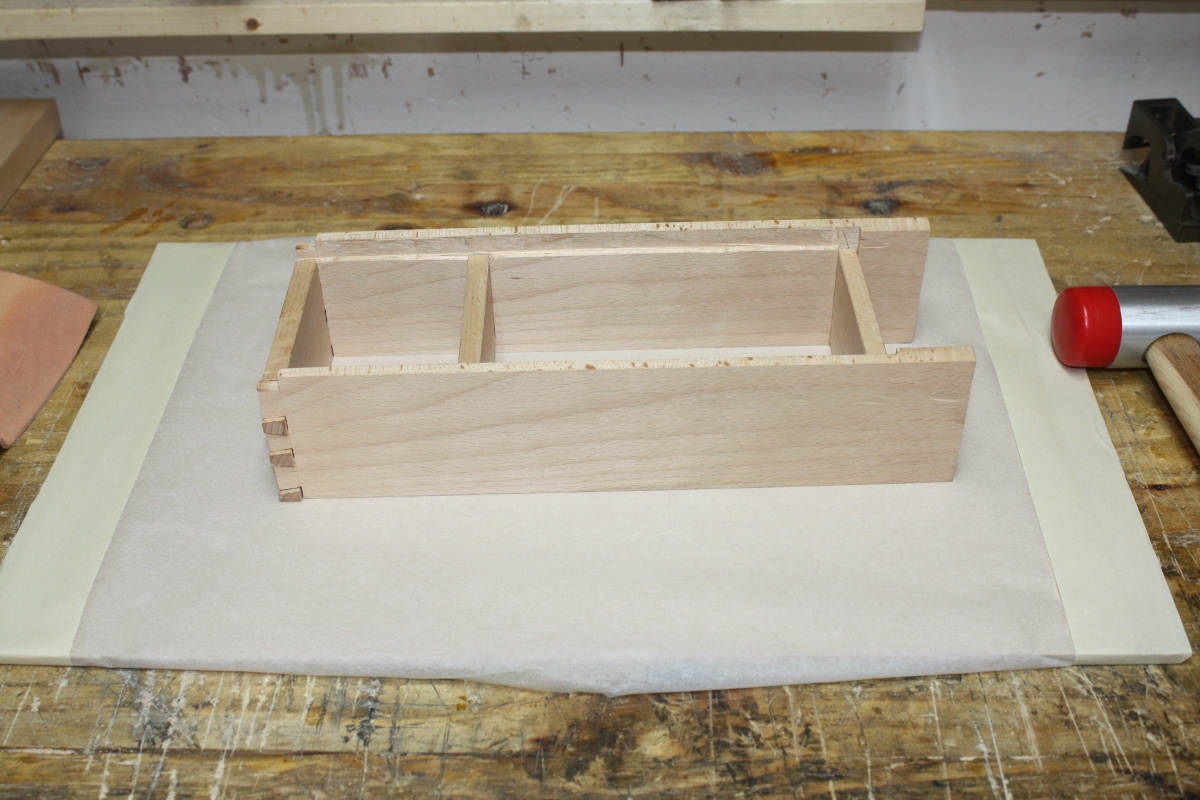 Okay, looks good, knock it apart and start the glue-up. 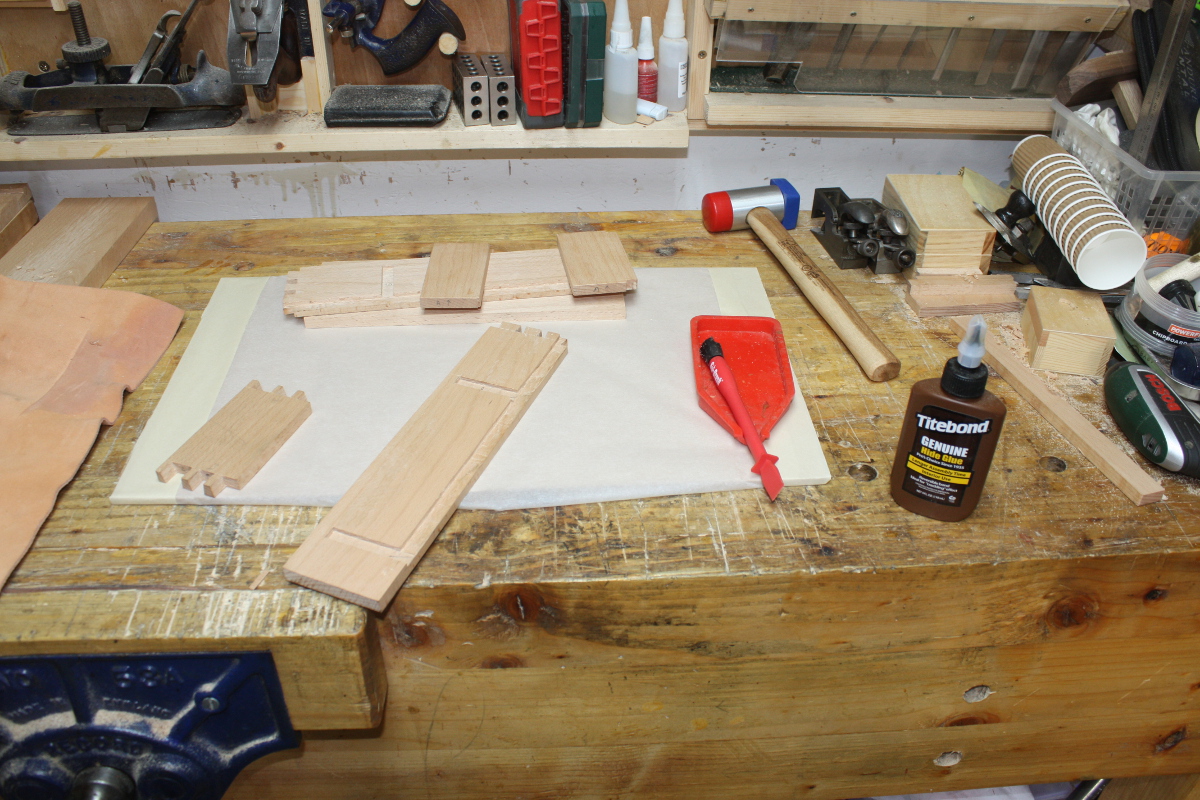 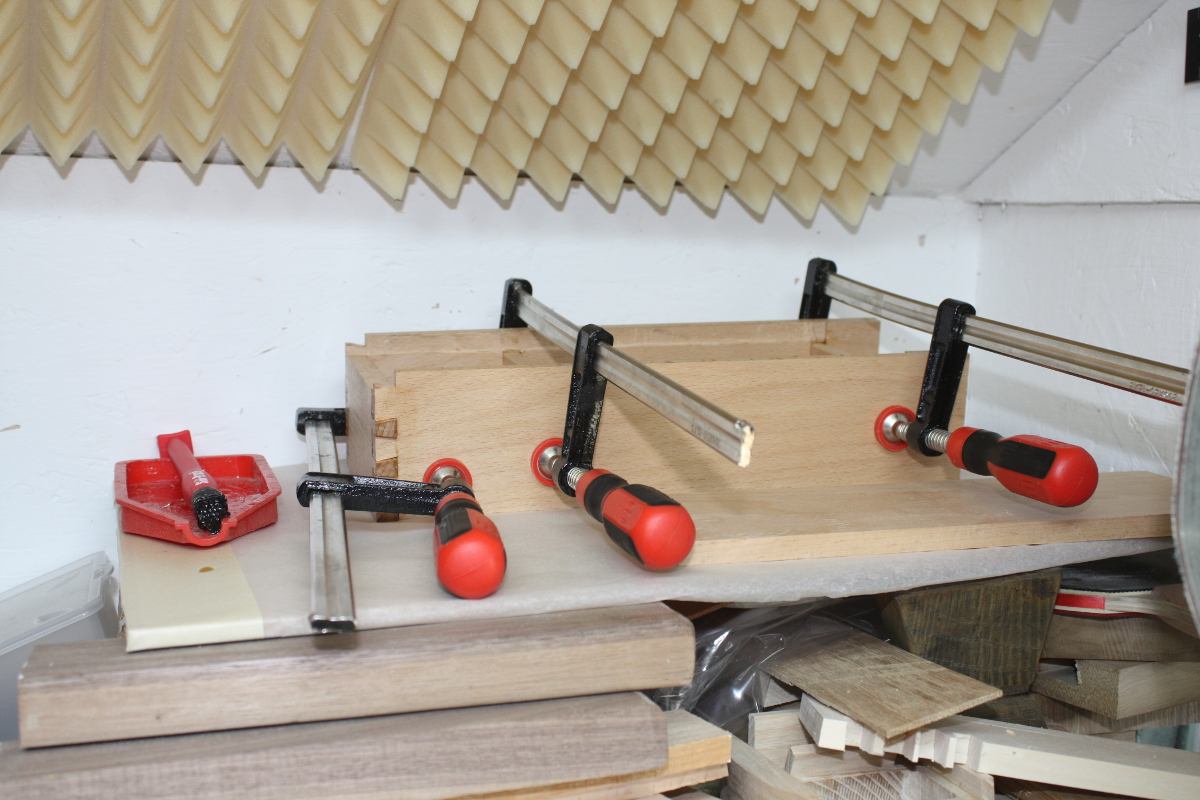 And that’s the carcass glued up and left to cure (the back’s not glued on yet). 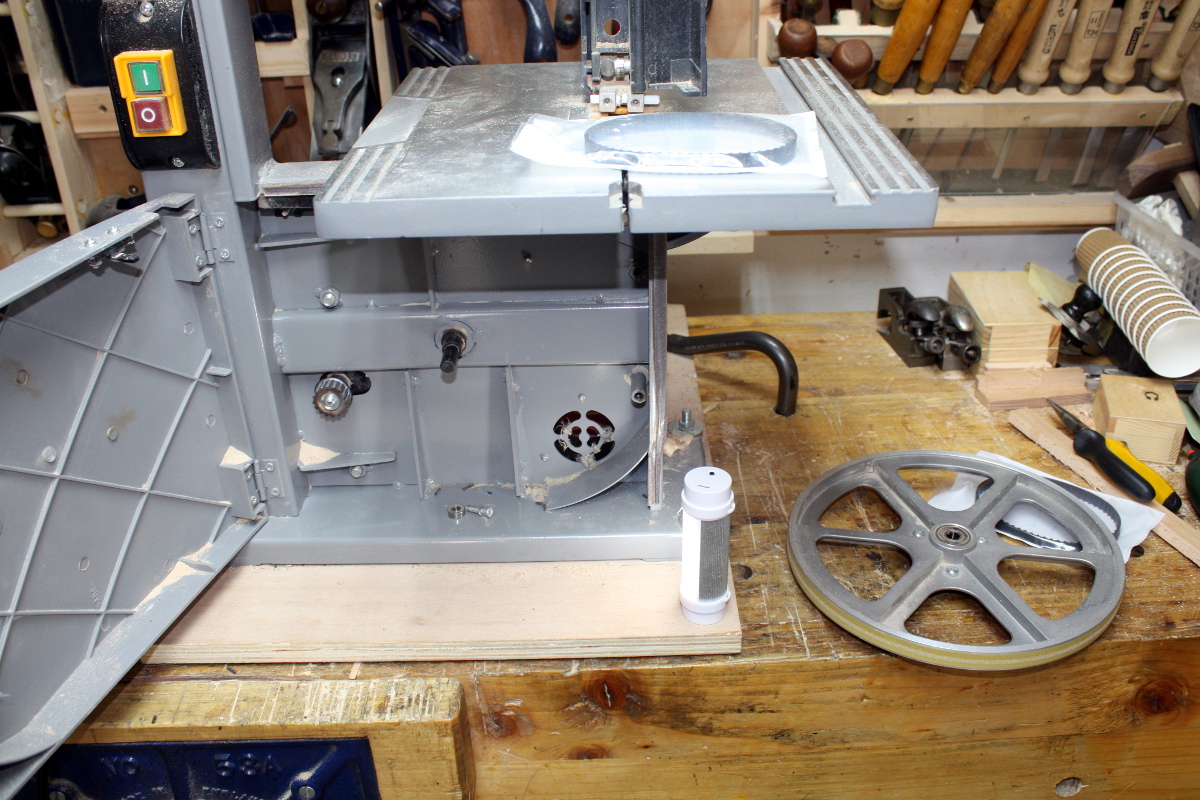 Found there’s a tool I could use… 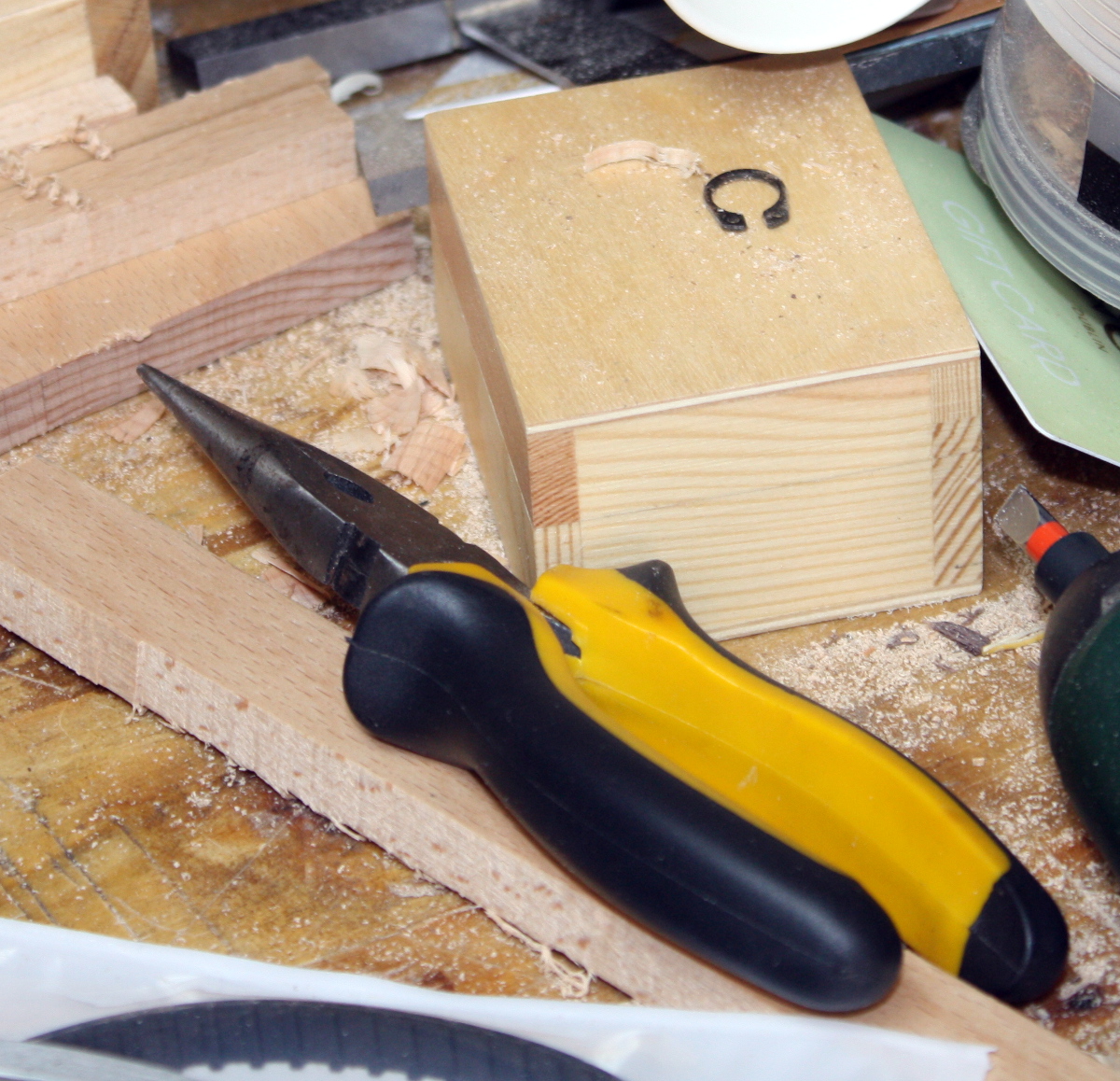 Circlips are a bit of a pain without the appropriate pliers. Bit fiddly. But managed not to break it which was good. 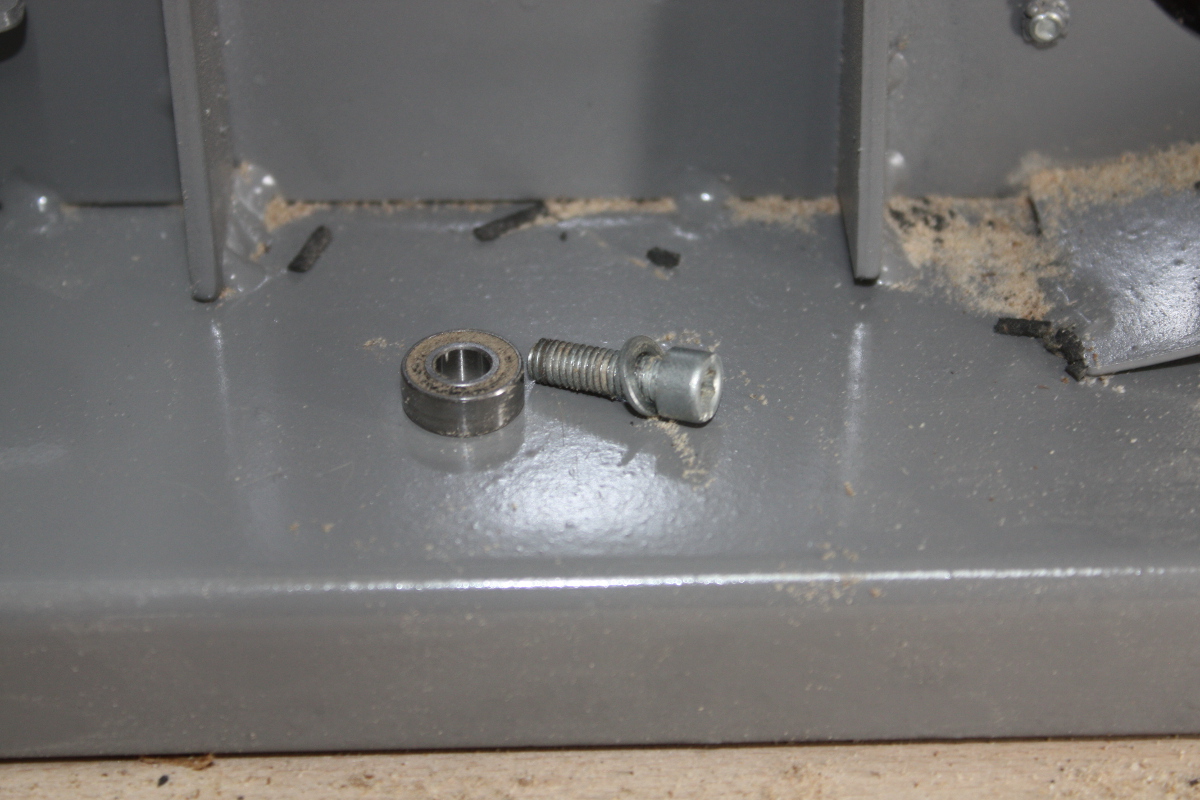 Then found these on the floor with all the sawdust and the teeth from the last belt. Took me a minute to recognise the lower thrust bearing from the bandsaw… 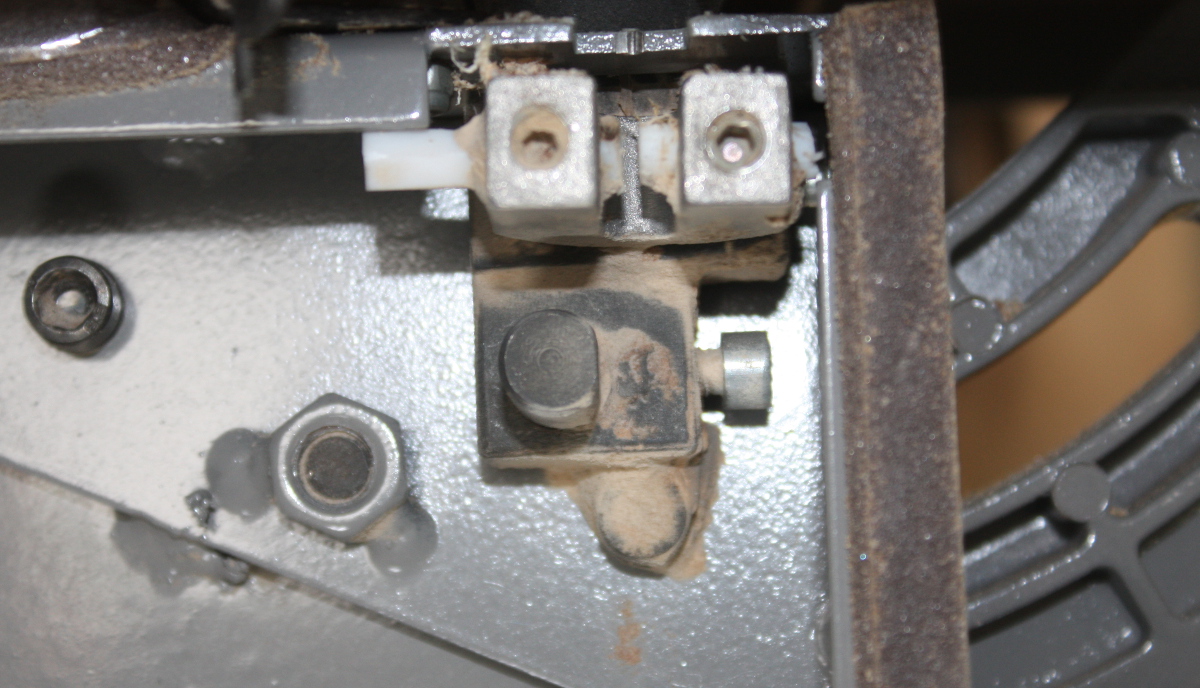 Must have come off during the resawing. That’s not exactly reassuring. Remounted them, and added it to the list of things to check.

Fitted the belt, put the wheel back on and tensioned the belt and locked the motor in place, put the blade back on and tensioned that and got everything all set up, then ripped down about five feet of beech from 150mm wide to half that (I’m planning on making a few small boxes and things with that), planed edges on all of the ripped sections (1×1′, 2×2′) so I could resaw them (hence the 73mm width, it’s the max for the saw), set up the fence for one board to resaw it to 1/4″ and 3/4″ pieces and resawed that down to size. The japanese toolbox idea I was playing with needed to have new edge pieces cut. I had tried to cut housing joints by saw and, well… 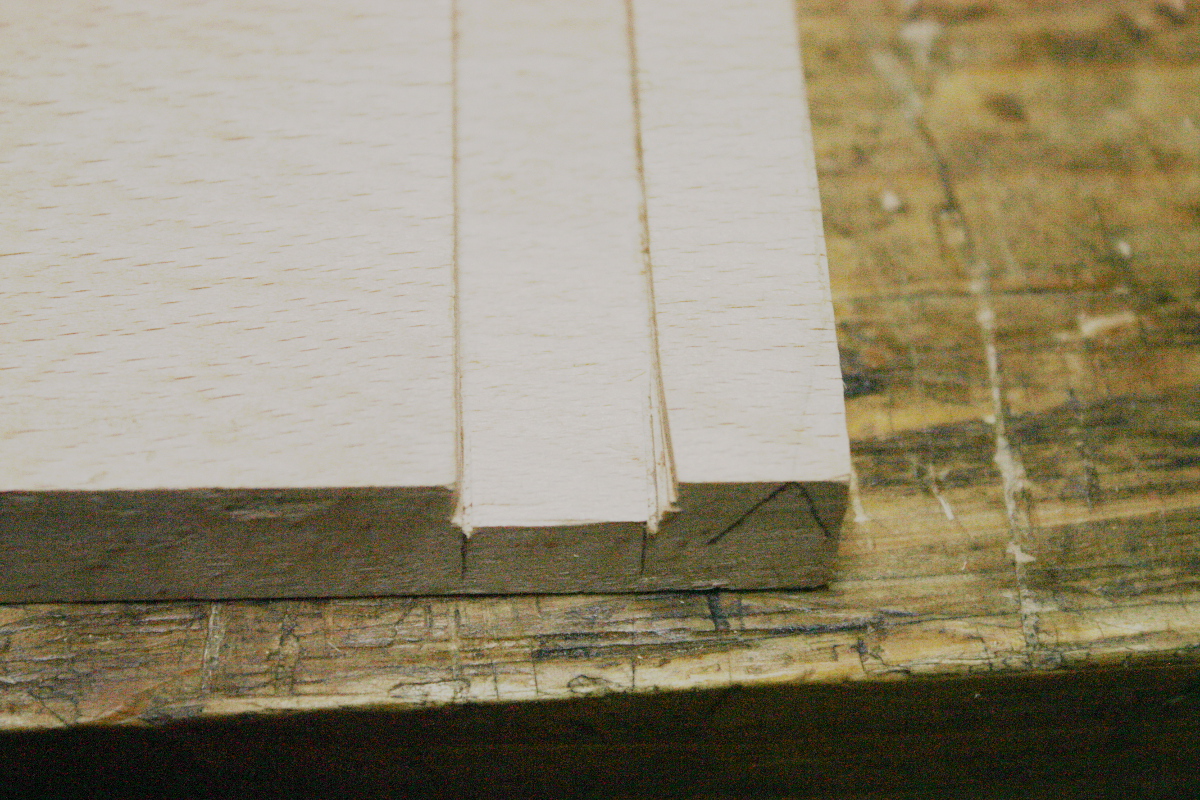 Yeah, don’t do that. Left a massive gap I couldn’t have hidden. I’ll probably slice off the bits with the joints and use the center section for the lid components or the handles. 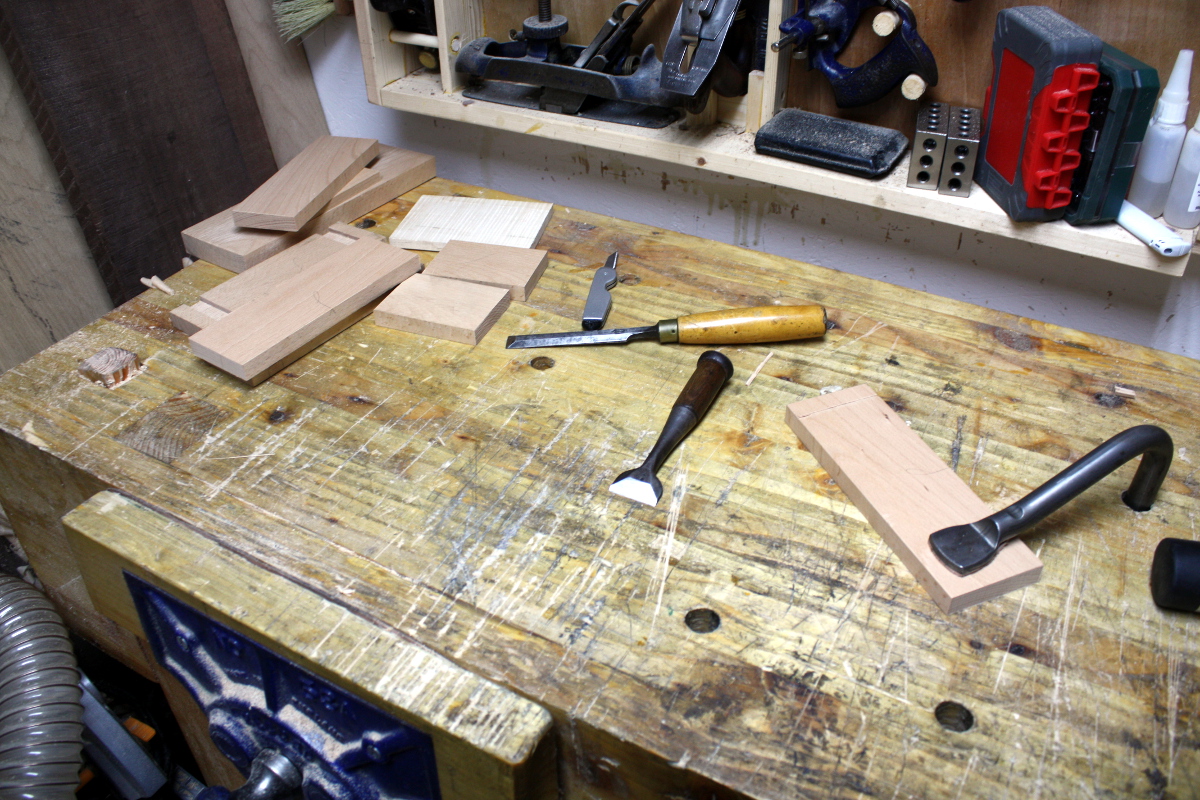 First, cut new housing joints on the new pieces (after planing, of course). Usual procedure – knifewall, chop down, pare to wall, chop, pare, chop, pare until we’re to depth, then mark off the other side off the piece to fit, and repeat. 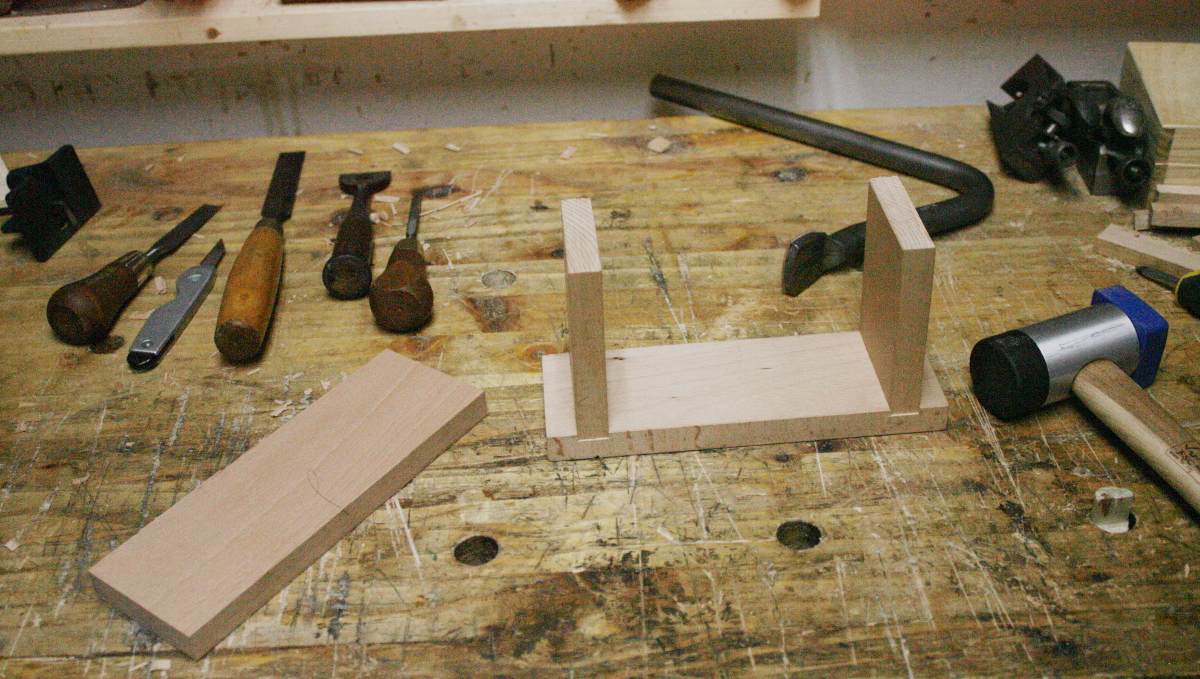 Went faster than before; I’m getting used to working in beech (and enjoying it). And I might have figured out how to do a reasonable housing joint. 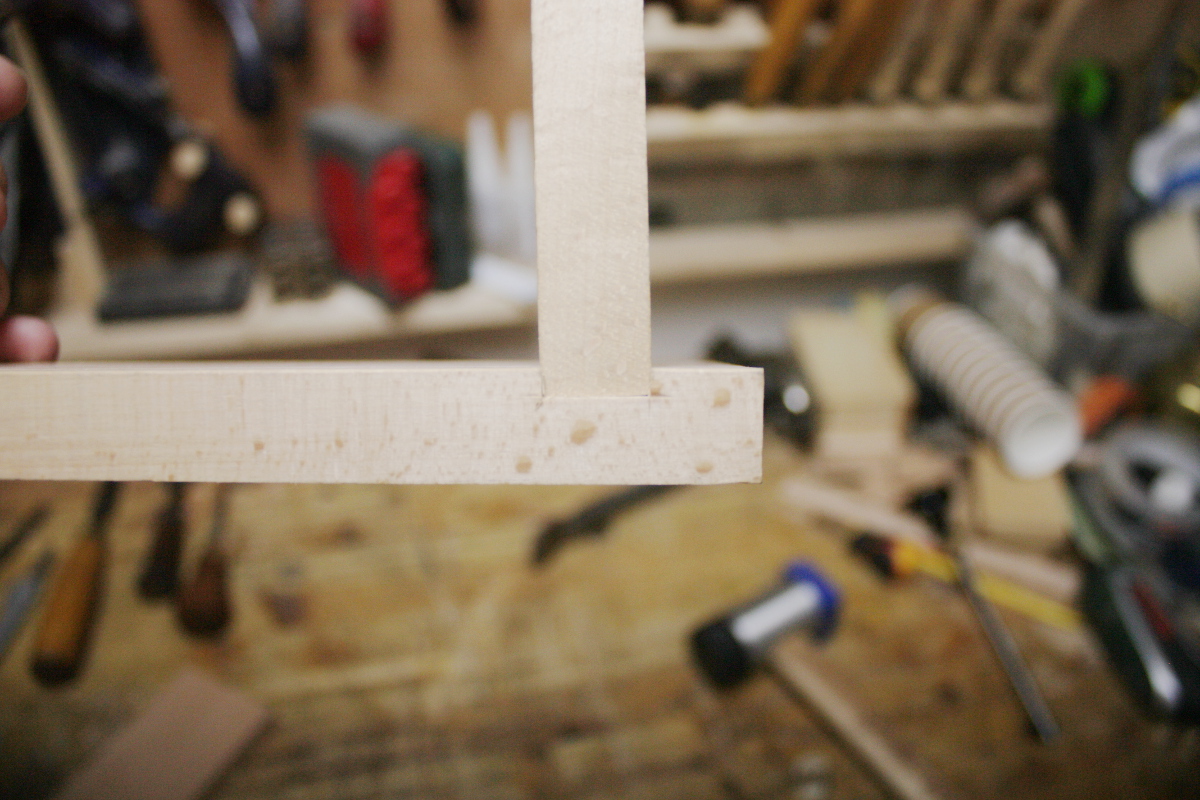 And it wasn’t too late, so I cut the joints on the far side as well. 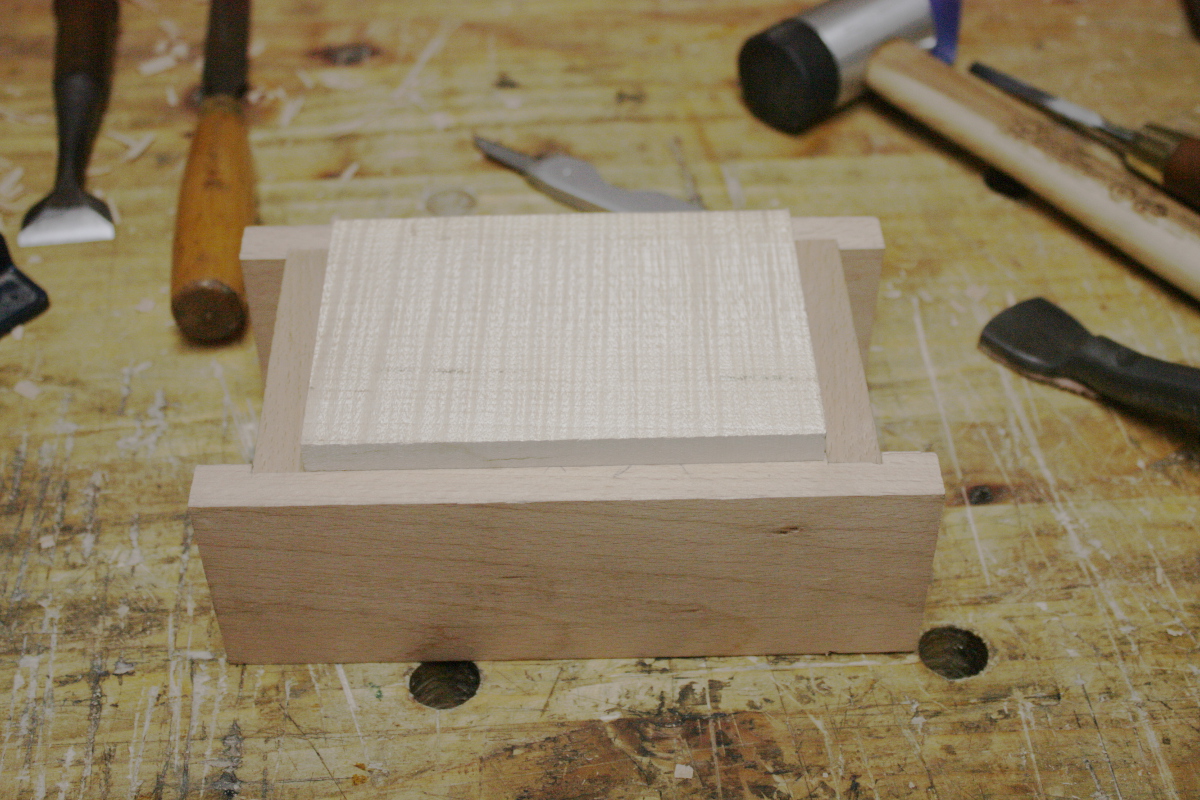 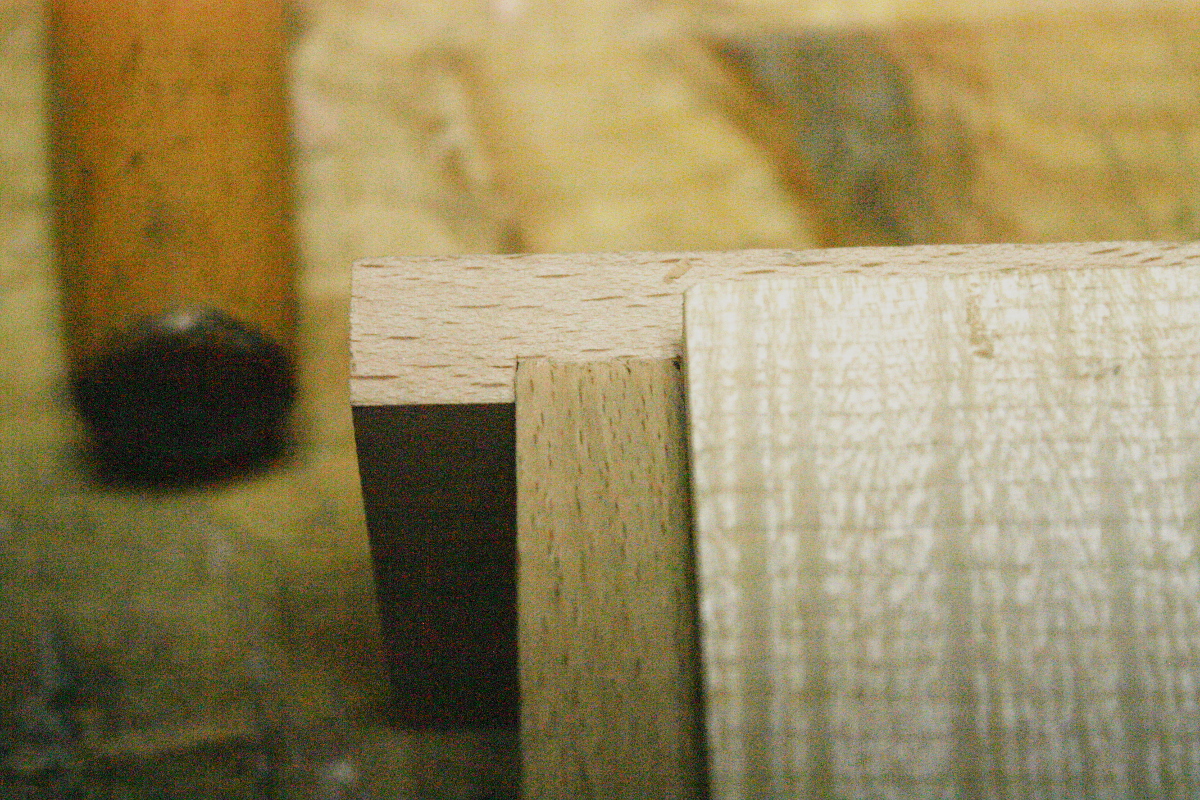 Right. I’ll fettle it tomorrow (just to get the reference faces all coplanar) and glue it up, then maybe drill for the dowel pins (won’t use nails on this one), and make some pegs for them from some walnut scraps I have handy that are too short for any other use. 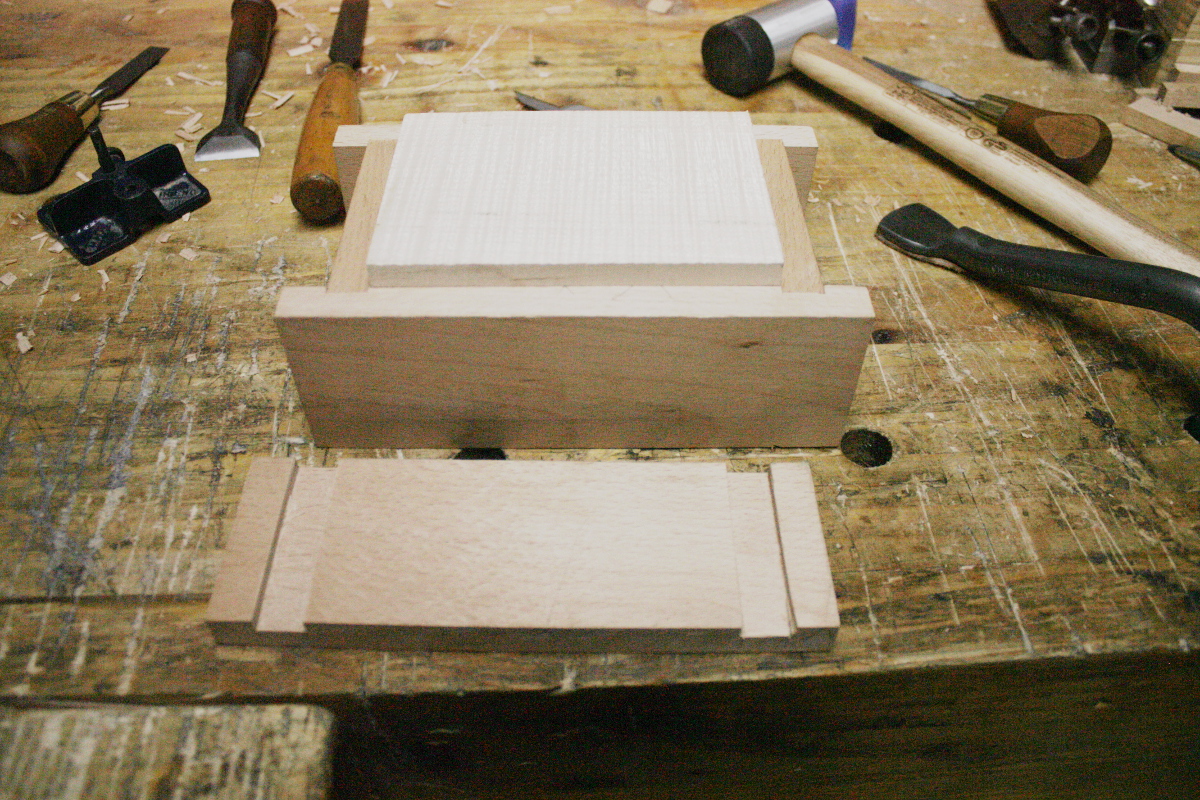 Definitely enough material there for the lid and handle pieces.

Last job for the evening, glue on the back panel for the locker. 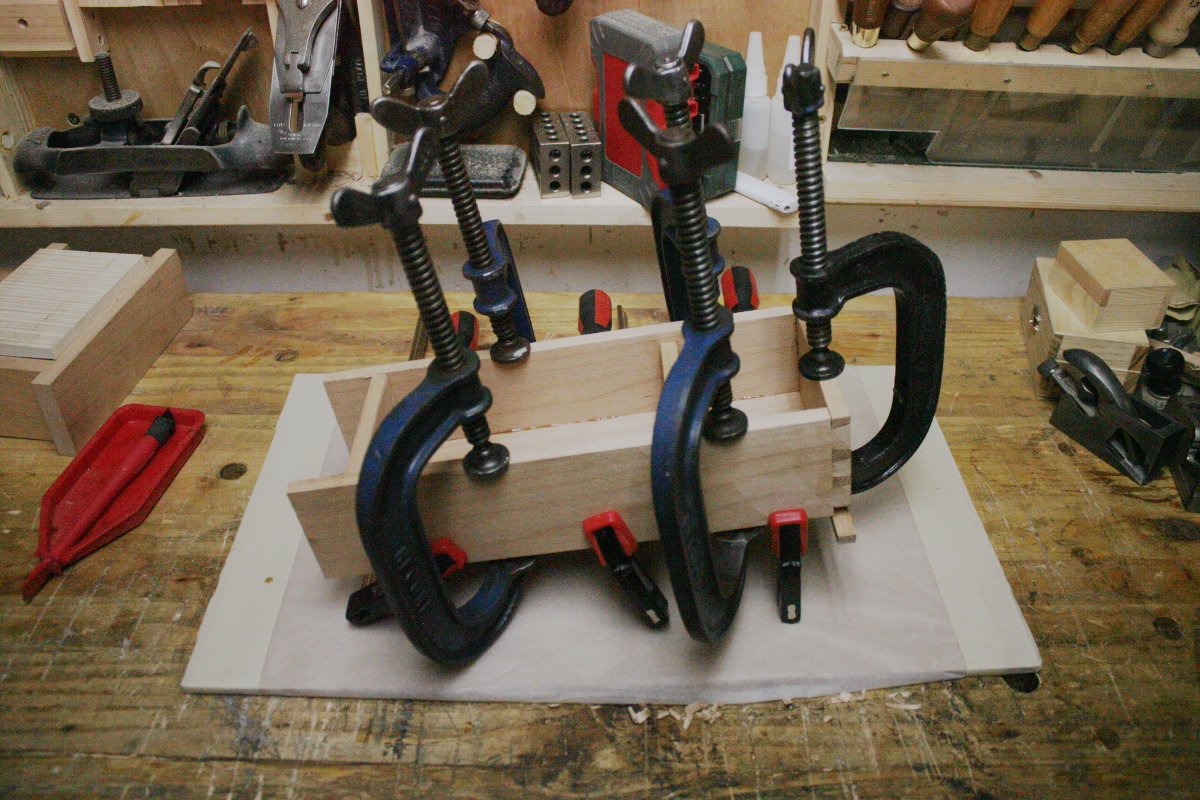 Fiddly but not too bad, it was so fettled that I really could have let the glue hold it in place. But if you have the clamps, might as well cinch it up (the C-clamps aren’t actually tightened down very much at all here, just snugged up to hold the back panel in while the f-clamps get tightened to get the edges in contact).

It’s not looking terrible, even if I’m saying so myself. Still need to level the legs, but that’ll do for later on. And I still haven’t the door sorted out yet, I’m thinking about how to decorate the piece of beech I have planed and set aside for the job.

I mean, what’s the point of practicing stringing if you don’t do any? 😀

Also, how the hell do you finish beech so it looks good?
To the forums!

So it’s a bank holiday weekend and I was looking forward to lots of time in the shed, but on friday a nice lady held me down and shoved a screwdriver and a pair of pliers in my mouth so I wasn’t really up to much woodworking on the Saturday, but at least the extraction didn’t cause too much pain after the fact so today I decided to hit the shed and get on with some stuff, and I thought I’d start with some resawing. 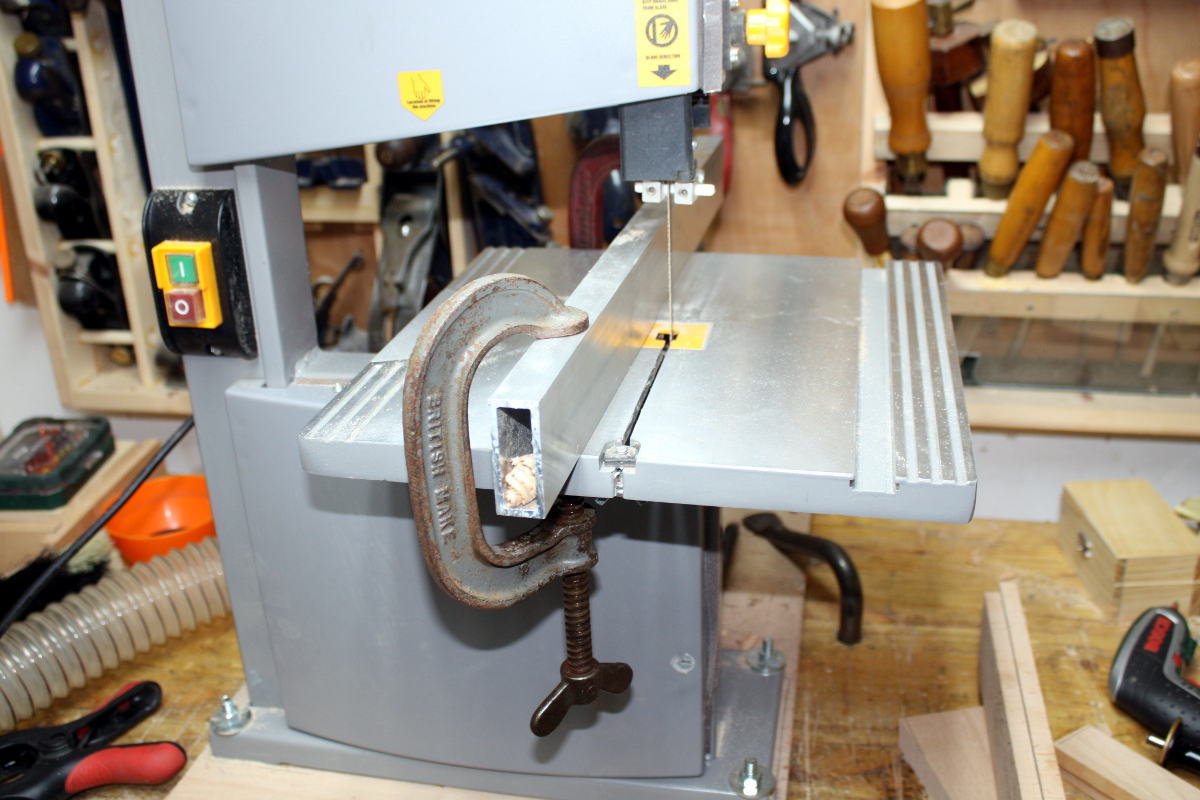 The fence they ship the Titan bandsaw with is ridiculously awful, so this is what I normally use – just a length of extruded aluminum that normally serves as a straightedge when planing. I must see about getting a wider box section for this job though, the underside of the table has ribs so it’s not so easy to find a flat spot to get the clamps on without tipping the fence over when you clamp. But after some faffing about I got it all set and started to feed in the beech, and getting pretty good results (This is 75mm wide material, the upper limit for the machine). 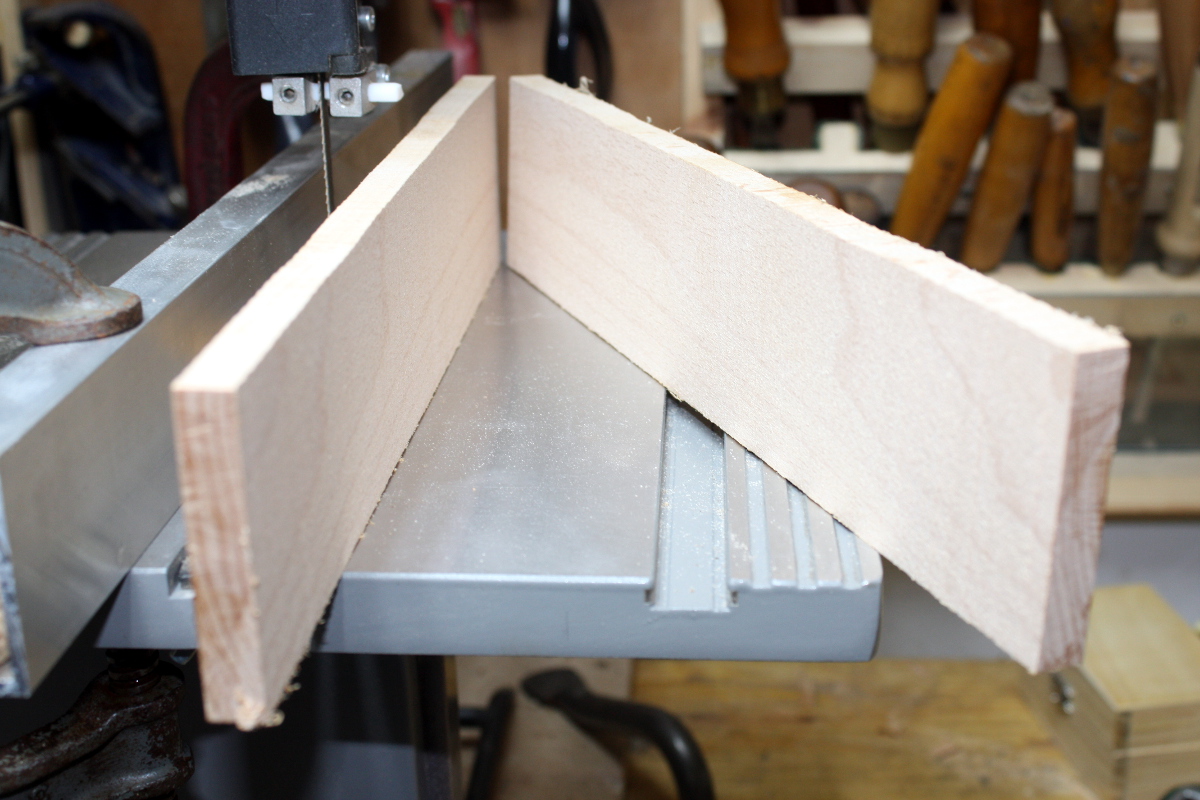 Nice straight clean cuts, minimal saw fuzz, no wandering or blade drift, I was happy with that. Then on the last board… 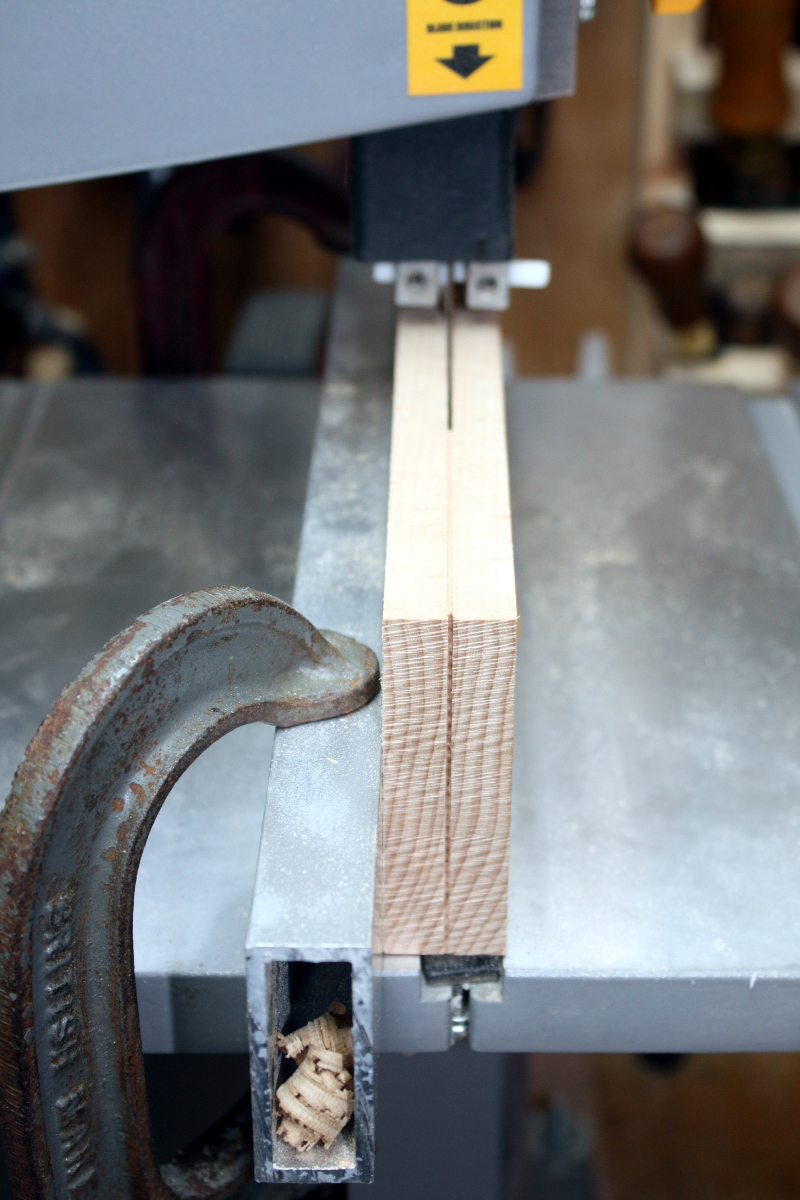 Just literally ground to a halt mid-cut. Motor’s still spinning, but the blade’s not moving. I was sure I’d overheated the little motor or something so I turned everything off and let it sit for a half-hour and then tried again, but to the same result – the blade would move allright, but the minute it hit the wood, it stalled out and stopped while the motor kept spinning. So I opened up the lower box and sure enough… 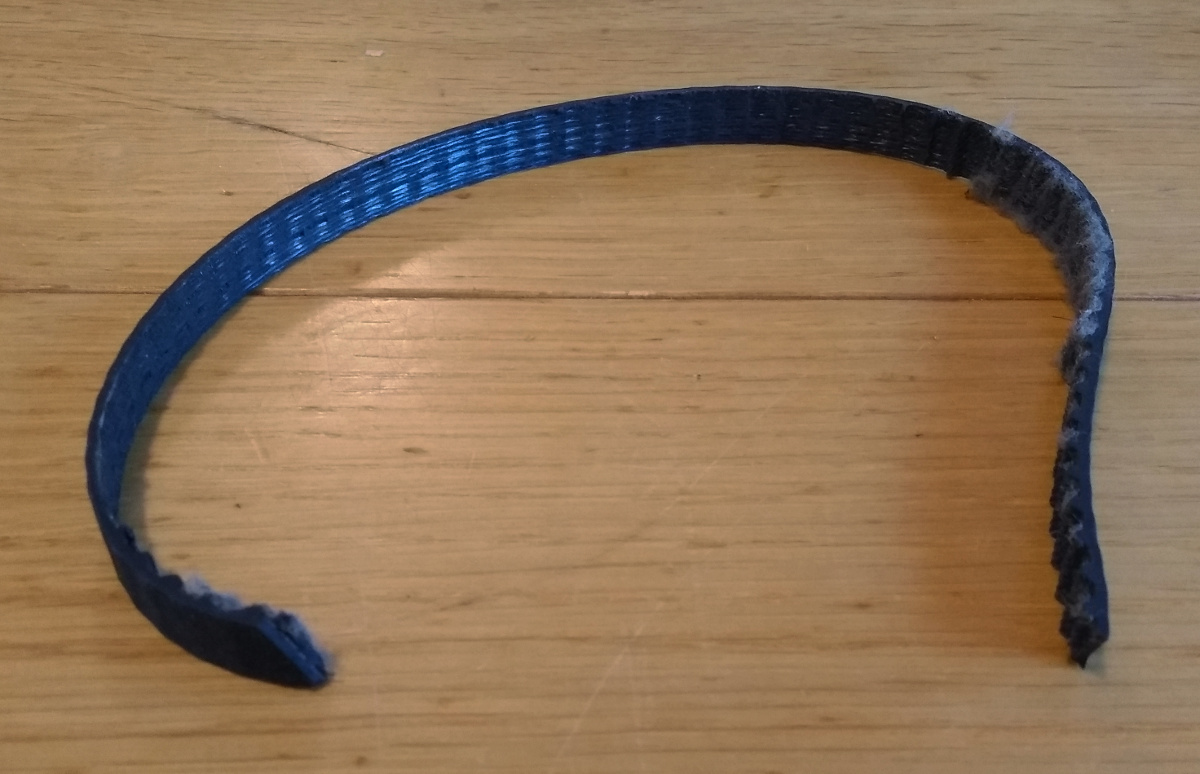 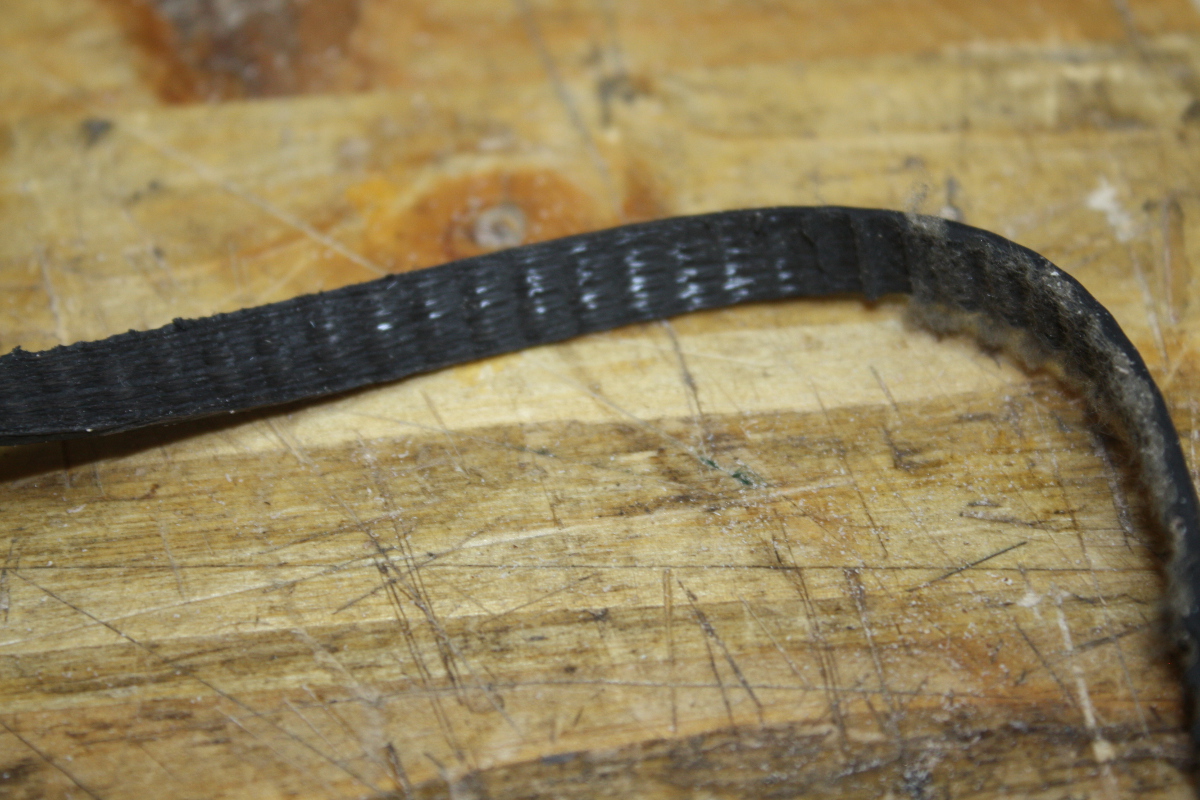 Note, the belt hadn’t snapped, I cut it out of the bandsaw to save time, the problem is that the teeth are all stripped off the inside of the belt (note the melted fuzz on the remaining third of the teeth, and there were a lot of completely stripped off teeth on the bottom of the lower bandsaw cabinet). It’s a 124XL037 belt in case this ever happens to you, and like the bearings, these belts are industrial lego. If you don’t need them fast, you can get a box of ten from aliexpress for $16; if you need them tomorrow, Radionics will ship you two for the same price in a day or so. So I’ll be sorted before the end of the week, but it’s still a bit of a pain in the fundament.

Still though, got most of the boards done. 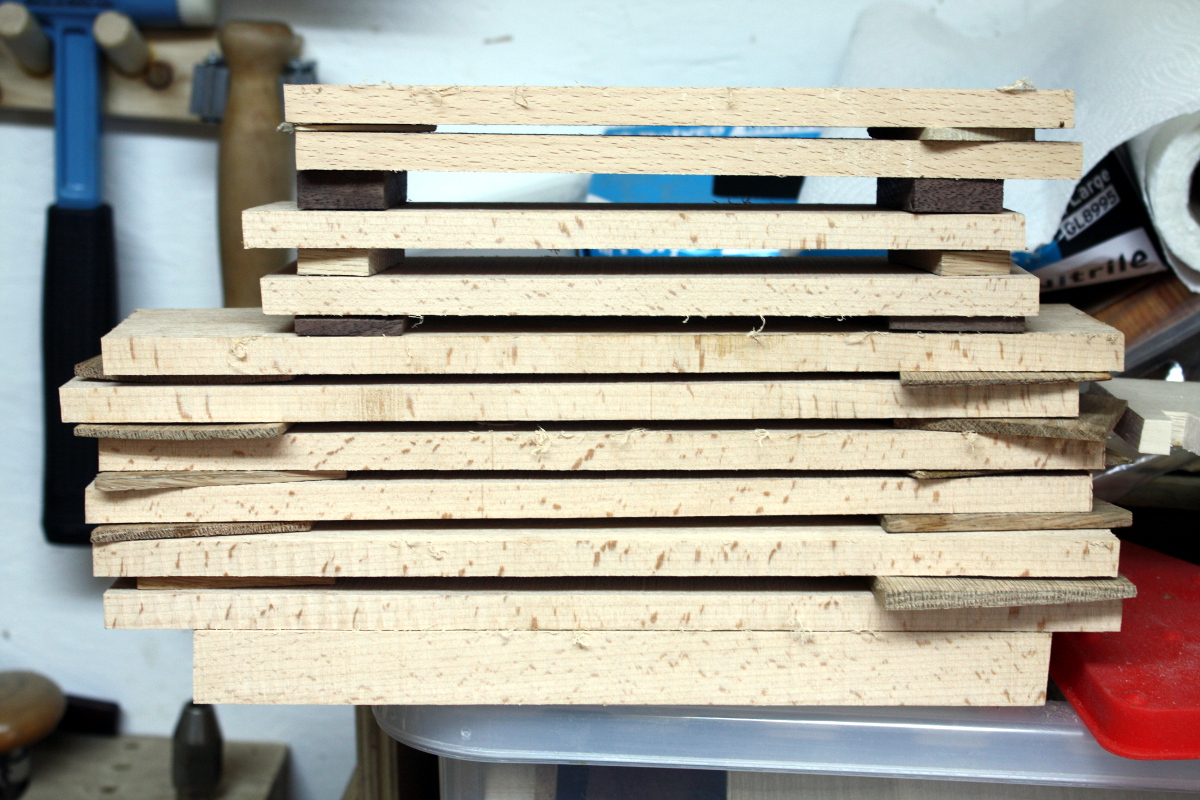 That bottom one is 100mm wide, it wasn’t getting resawn, it’s to be thicknessed. And the remaining board I was mostly through so I finished resawing it by hand. 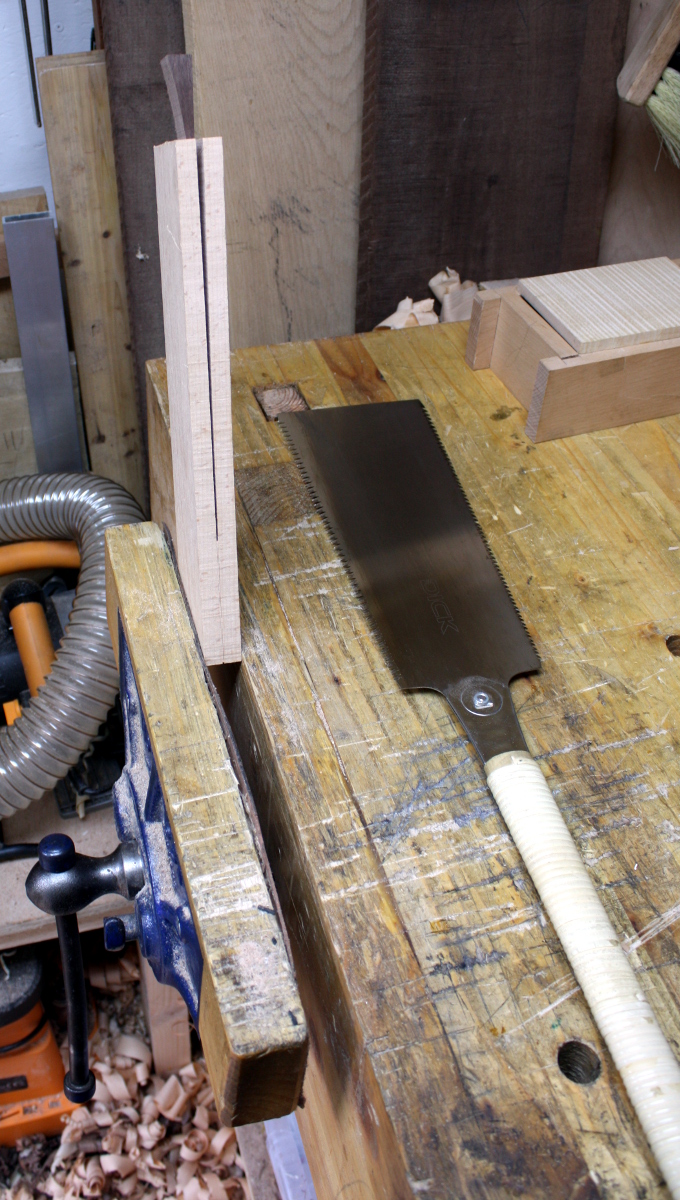 Yeah, still not my favorite part of this hobby. But beech turns out to be nice to saw.

Then laid out the parts for the next project… 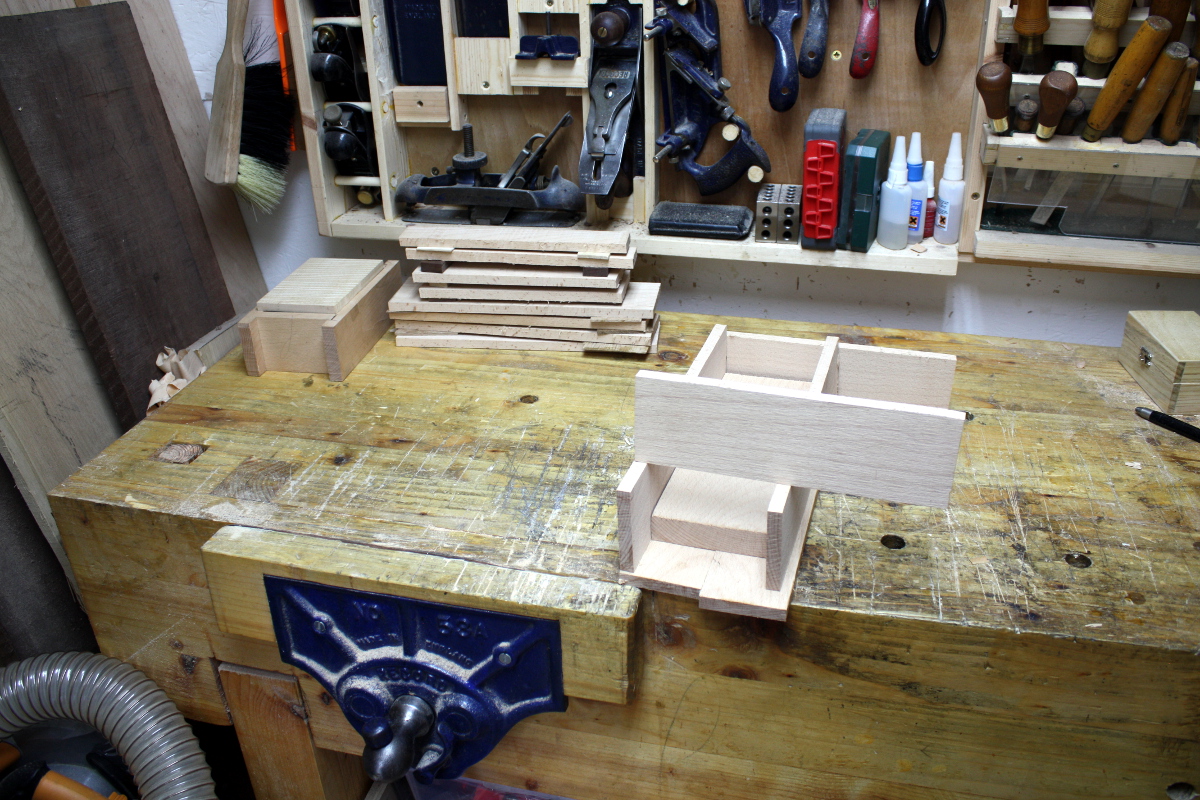 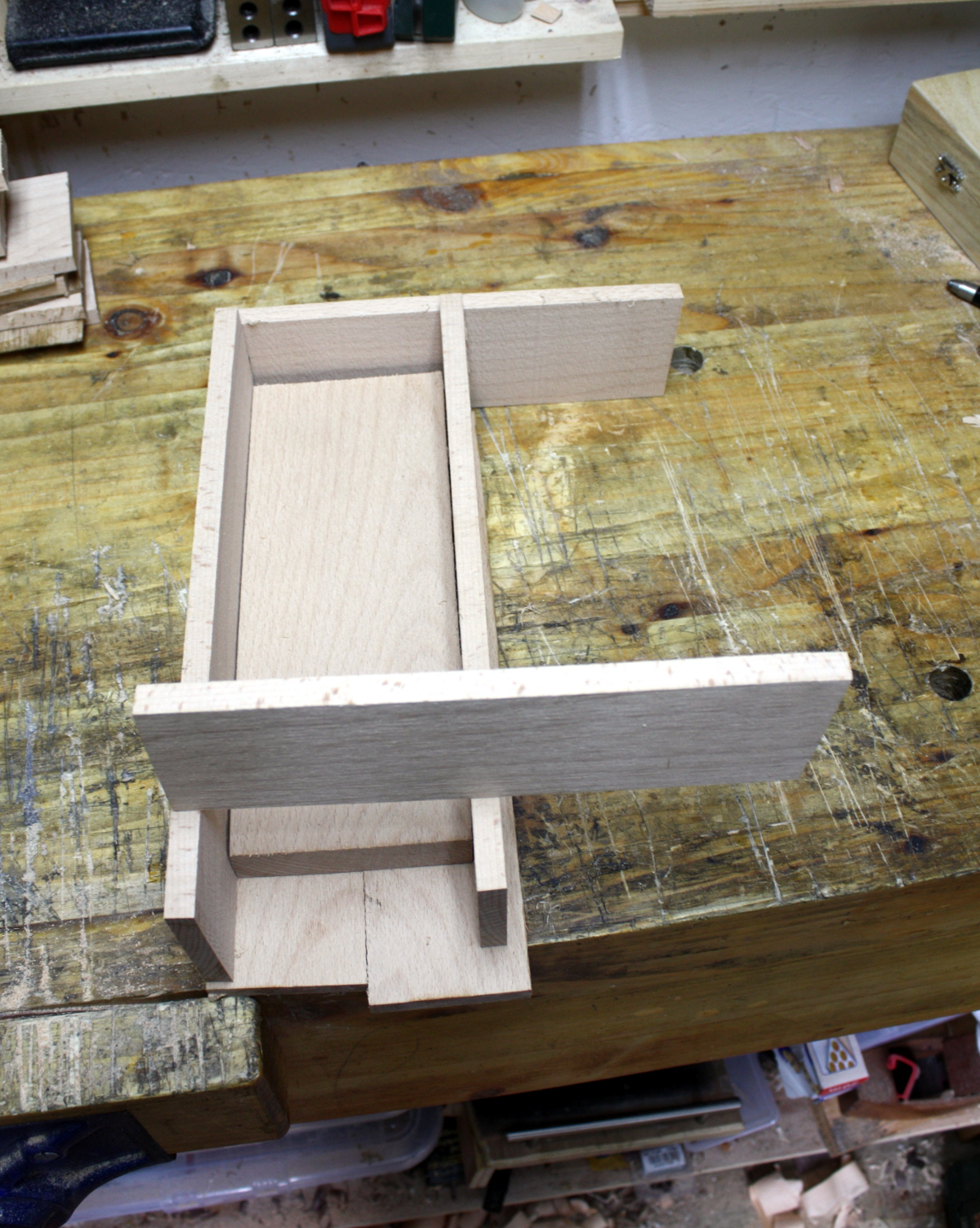 Bit of a glue-up panel for the back… 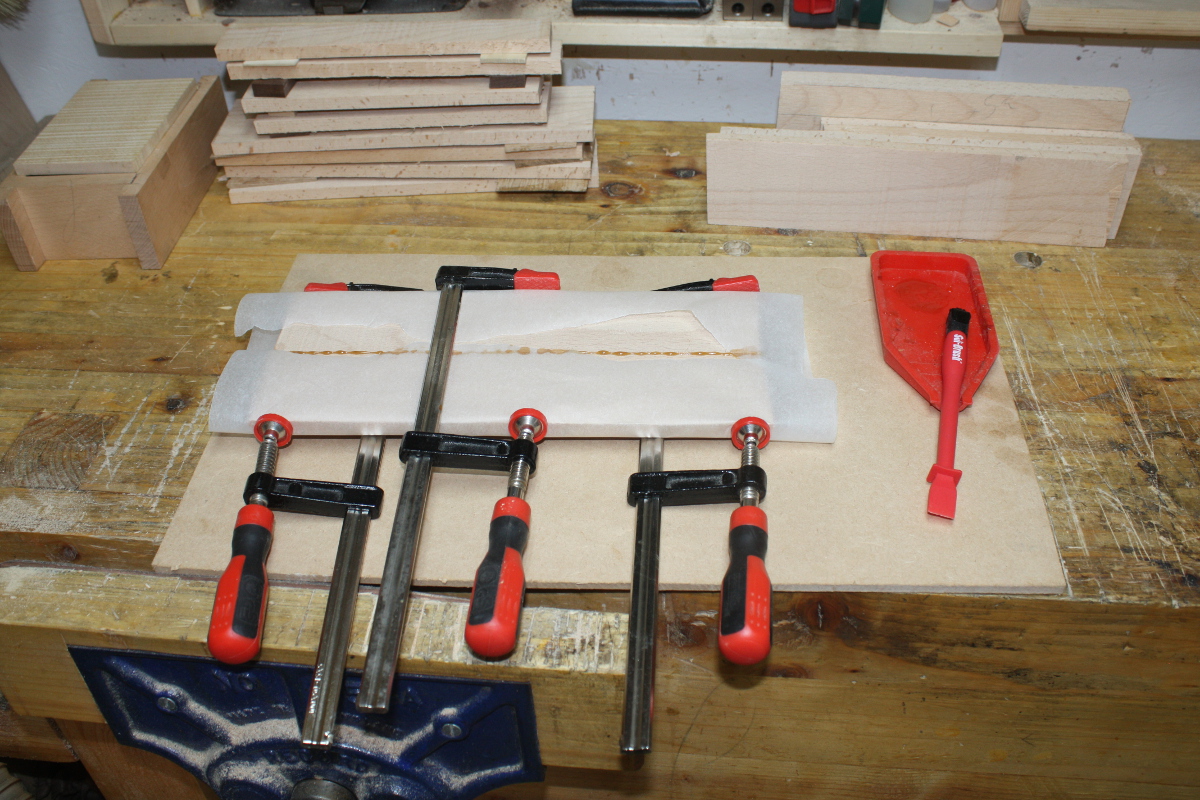 That’ll be ready tomorrow and then I can continue planing the parts. Then the outside frame gets dovetailed, the inner shelf and bottom get housing joints, I’ll rebate the panel into the frame at the back and thickness the door and that’ll be that.

Yeah, so only another six months 😀

And then maybe some stringing for decoration… or some carving… 😀

I also got some walnut pieces rough-cut from an offcut from the sidecar cot to be used in the experimental box. I’m just not looking forward to resawing that to a usable thickness and I hate thicknessing walnut by scrub plane, it feels like such a waste. Oh well. Frame saw time maybe.