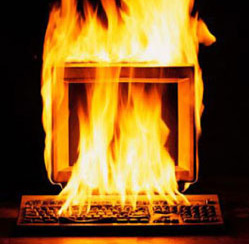 Tuning a webserver in three minutes while it's being slashdotted.
Read More
Mark Dennehy in 10 Mar 2010 21 Comments

So one of the things I was working on as part of DeviceAtlas (but which ultimately didn’t get used) was a cache-conscious hash table in Java. It’s not unique in design – in fact it comes right out of a research paper written for the SPIRE 2005 conference by Nikolas Askitis and Justin Zobel – but the implementation was interesting to me as I’d not done optimisation work in Java in a while, and some things had changed quite a bit since I last wrote Java code. And it was a bit of an ego boost that I got it to outperform java.util.HashMap:

Of course, there are the minor criticisms that it’s nowhere near as general-purpose as the HashMap class and that HashMap is arguably exhibiting an intelligent design choice rather than cheating per se, but I like my ego so I’m going to ignore those arguments!… Read the rest