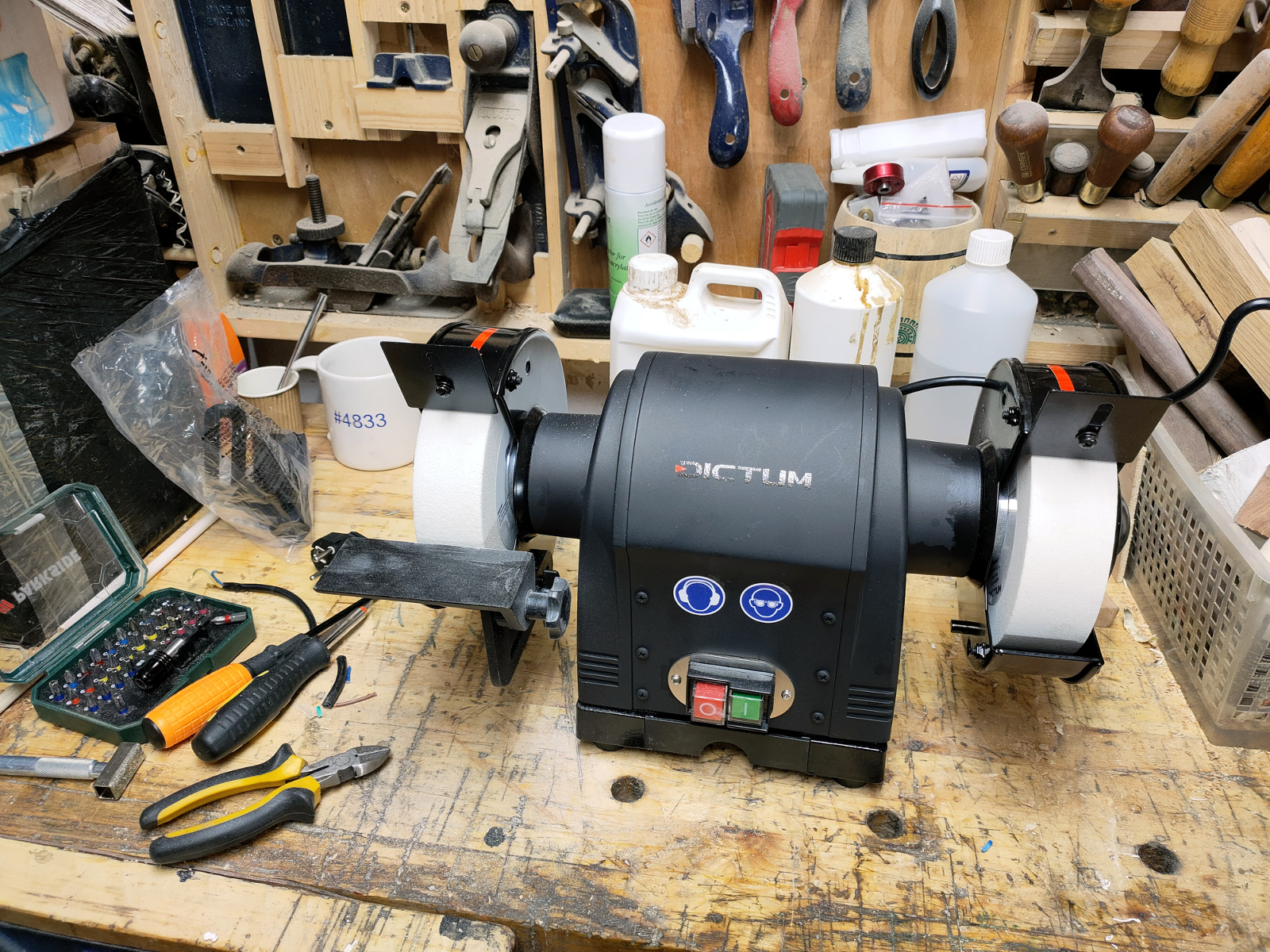 So immediately after buying it a nice new jig and making it a new backing board, the lidl grinder gave up on the grinding life. There’s something about noticing that your bowl gouge is bouncing on the stone and then realising that that’s happening because the stone is wobbling while doing around four thousand rpm in front of your face that will trigger both a sharp step to the right out of the line of fire, and will bump up the schedule for buying kit for the shed.

I probably shouldn’t be so annoyed, I got a good five years out of that and I paid about €35 for it from Lidl, so I definitely got my money’s worth. And I’ve since taken it apart and the problem seems small enough that it can do light duty with a wire wheel or a buffing wheel later on, but for now it’s gone into storage along with the wheels (which were grand, they’re axminster wheels and are sound).

But I’m not a fan of the idea of exploding stone wheels in the shed given that there’s so little room that I’d get hit from all directions at once with the ricochets. So the plan to buy a slow-speed grinder was brought forward by a few months, and the plan was to buy a Creusen 7500TS because I’d used one in the woodturning course last year and they’re solid little beasties. But right now between covid and brexit, they’re out of stock all over the EU and the UK. So, plan B was the Dictum own-brand low-speed grinder, the DS150L. Placed an order and a bit over a week later, the large box shows up at the door along with Dictum catalogs to drool over.

It’s an absolute unit of a thing. Initial assembly took a little while and the sparkguards are a no-go because the bolts that attach them are so long they impinge on the wheels. Granted, I could grind them down, but honestly, given that I never use these things without a full faceshield, I’m not sure they’d give me anything. The spark arresters are a welcome addition and I left off the right hand table because that’s where the Tormek jig will go.

This thing is very very solidly built. Cast iron base, what looks to be a mild steel body. The tray thing on the bottom is thin plastic but you can’t just discard it as it’s the main cover over the inside and the electrics.

I did have to dissassemble it to put it on the backboard because it comes with heavy rubber feet so it can just sit on a bench and there are slots in the cast iron base to bolt it to a benchtop that way; but I wasn’t comfortable with that while it hangs on the wall. Maybe in a future shed 😀

Did I mention that it’s very very big? I honestly didn’t think I’d be able to reuse the backing board, but it just squeaked in there.

Okay, the entirety of the left wheel is now hovering out in free space while the right wheel has almost three millimetres of spare board left once everything is mounted, but it does fit.

You might also notice that the BGM-100 stand for the Tormek jig bar is now at full extension where as it was as short as I could make it with the Lidl grinder. Everything works, but it feels comically large compared to the old machine. And there’s a huge surface area to work on when sharpening, which is a nice bonus.

And it runs just so sweetly. Quiet, fast to get up to speed, and so solid and vibration free. If it lasts as long as the Lidl special, I’ll be very happy with it. I might even buy a CBN for it later this year if it works out (and if they come back into stock – again, covid and brexit is making a dogs breakfast out of a lot of companies’ stock levels).

With tools sharpened again, I made my first pen and a nice little box as birthday gifts for Claire, and now I have nothing in the must-do-first list in the shed so I’m thinking about the next thing I want to tackle, and well timed, this finally arrived as well…

China’s cheapest, but now I have an airbrush for every chestnut stain in the shed, and a gravity-fed cup for the iridescents and other paints and a second one for in the house because if they’re seven quid each, why not, and I do actually use them for fun outside of the shed anyway 😀

‘Course, I’m also back to the Lidl air compressor because my little Draper 6L compressor gave up the ghost and now dumps the entire tank out through an internal valve somewhere inside the mechanism after pressurising. It should still be under warranty but I’ll give you three guesses how fast the company I bought it from is replying to my emails…

I did manage to make something from all the offcuts from the new baseboard for the old grinder though, so it took a full year, but I finally made something from offcuts that would otherwise have been burned 😀