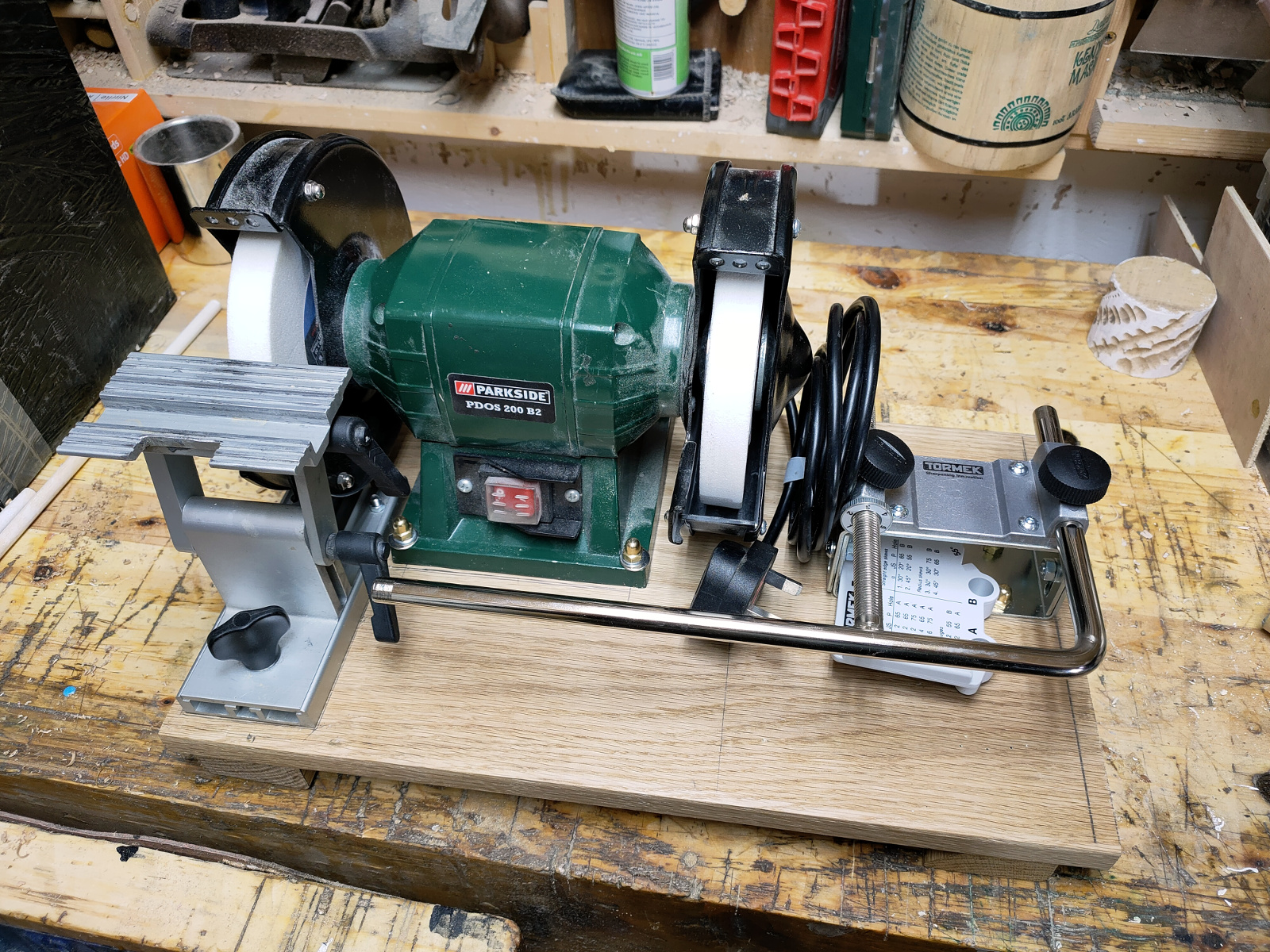 I finally found a BS10 Charnwood bowl sander kit after a lot of searching – it seemed everyone in Ireland and the UK and Europe was out of stock of this and none was expected till February, but Raitt’s up in Donegal had one or two left and even though they were technically closed for the holidays, I guess they were having the same kind of holidays I was having and they had it in the post before the new year started (I will definitely be going back there). I’ve had a small play with this since I got it and it’s such a huge step forward. I’m actually looking forward to the next bowl sanding now which seems a bit off 😀

Next up, I’ve been watching Colwin Way’s videos that he was doing for Axminister all last year during lockdown from his home workshop:

They were pretty good tutorials and one of the things he kept using is in that thumbnail – it’s a small platform that mounts in the banjo of the lathe along with a velcro-attached sandpaper disk on a plywood disk which has a metal faceplate ring on the back that his chuck grabs onto, so the lathe becomes a disk sander. It’s not a new idea by any means, but the way he was doing it was very straightforward and one tutorial covered how to build it and I have an Axminister lathe myself and a second faceplate ring for my chuck so the other parts (and they’re not hugely expensive for my lathe, came to about 25 quid in total) went into the order from the Carpentry Store…

It’s a nice little bit of functionality to add for doing things like small toys and such on the lathe, as well as for ordinary rectilinear woodworking stuff. Now I just need to find storage space for it 😀

Next, I finally got myself a ring live center for the tailstock. Splitting stock with a 60 degree cone center is hopefully a thing of the past now (and since that caused some mushrooms to explode on me in the beginning, I will not miss it…).

That live center is the multihead one from Axminster so I can remove the ring part and replace it with one of a few others, and I’ve seen some examples on youtube of people turning their own insets for it for things like turning spheres and the like, so it looks to have some potential.

I also got a few carving bits from Saburrtooth for the dremel. I was watching Rebecca DeGroot making some experimental bits and pieces (seriously, you need to see her stuff on instagram, it’s phenomenal) and some of the techniques she was using looked like fun.

I only had a few minutes playing time with these so far, but there’s potential there. I also have had this idea in my head for the last six months for a bowl that I want to make that I’ll need these for (though that technique came more from Stewart Furini than Rebecca DeGroot). But that bowl isn’t even started yet, I’ve only just finished getting some resin into the blank to stabilise two annoying cracks…

I might have chosen the wrong pigments for those but I think I can work with it. If not, I’ll make another smaller one. Or something. I’m still working out how to get the thing I can see in my head onto paper, let alone into wood.

Moving on, one of the things Colwin Way was covering was pen turning and I kindof always thought I’d give that a try, it seems to be mandatory if you have a minilathe, so I got a beginner’s pen turning kit. I expect the first few to be the pen equivalent to a funnel, but hey, it’s all good fun, right? 😀

It’s a rather nice mandrel that one apparently, which is blind luck, it happened to be the one the Carpentry Store stocked that fitted my lathe. Anyway, I’ll give it a go and see how it works out.

There was a bit of restocking as well. I’ve used up all the black, yellow, green and red from my sample pack of Chestnut stains on various holiday decorations and things so I ordered bottles of those to replenish (I figure I’ll keep doing that as I use the little bottles up so that I only have to buy the stuff I’m actually using), as well as some more acrylic sealer because I was out. And I got one of the little timber kits for Calum to build and paint, which should be fun:

There was a light pull drive as well because I want a friction drive to try to get Calum turning little things on the lathe, and I don’t want him using a chuck or a pronged drive center just yet – if he sticks a tool into something with a friction drive center, all that happens is the work stops spinning, rather than there being enough of a connection between spindle and work that it can throw the tool around on him. That hasn’t arrived yet, but should be fun.

And lastly… well, look, I got two nice woodturning tools last year, a Crown PM 10mm bowl gouge and an Ashley Iles 1″ skew chisel. They’re lovely tools but I’ve been afraid to go near them because my sharpening setup was… well, it wasn’t getting it done. I was grinding into the jig itself for one gouge, for another I couldn’t get the jig to clamp it at all, the axis line for the inside and outside curves on the gouges weren’t aligned anymore so I had asymmetric tools, it was a mess.

That last one is an old photo from April – I did change out the carborundum wheels there for aluminium oxide ones a few months back, but the jigs themselves are cheap knockoffs of the wolverine guides and they just were driving me nuts and they were wearing in places and I couldn’t see how to get better performance out of them, so I splurged and bought the BGM-400 kit, took the grinder platform apart and rebuilt it all…

So now I have the Tormek mounting bar, and the gouge sharpening jig, the general purpose sharpening jig that does roughing gouges and parting tools and so on, and the skew chisel sharpening bit. And it’s very very neat indeed. I’m hoping to be able to fix the bad sharpening on all of my gouges, stop shortening the tools quite so fast by keeping a consistent grinding angle rather than constantly having to grind off another bit of steel to correct a bad grind and so on. I know, it’s not a slow speed grinder and it’s not got CBN wheels, but those will have to wait for another day and with a consistent jig setup for sharpening I might be able to start using that lovely Ashley Isles skew soon…

There was one more thing, and I know this is all excessive but it’s birthday gifts and solstice gifts and some savings that would have been spent over five or six months all happening at once before Brexit really bites and we can’t get this stuff or the price doubles in the next few weeks. That’s more likely than not I think – we already are having increased problems getting stuff from the UK or Europe, DPD won’t ship to Ireland at the moment at all because Brexit has mangled both exports from the UK to the EU and shipping from EU to Ireland (we are still in the EU in case anyone was wondering 😀 ) via the land bridge over the UK, which has caused a few things to go astray (and I don’t even want to think about what’s happening to hardwood prices at the moment).

Plus as I said about the bowl sander, a lot of stuff is out of stock everywhere with no really clear restocking date; and we’ve already seen one major woodturning shop in the UK (the Toolpost) close its doors with Covid and Brexit being cited as the cause. Hopefully more don’t follow, but 2020 was not a year that gave us all a lot of cause for optimism, and so far 2021 has started off not getting out of the first week before the US has an actual coup attempt and the news cycle in Ireland has been something of a nightmare as well; we’re now 20% worse than the US for Covid infection rates per capita – literally no other country in the world has had positivity test results this bad or this fast a descent into disaster – and on top of that we just had the Mother and Baby homes report published which simultaneously informed us of nine thousand dead infants in the small percentage of religious institutions investigated and also tried to absolve from blame the religious orders running those institutions and the state that signed contracts with them. Maybe this just isn’t optimism’s best year either.

But I’m one of the very lucky ones in that I can try retail therapy for now instead of the internal screaming. This last present to myself is a real luxury – I bought a set of six cheap airbrushes (the suction variety rather than the gravity fed ones) to put the chestnut stains in. Changing bottles on the one gun was leading to a rather surprising amount of stain winding up on my hands and the bottles and the floor because of capillary action and general clumsiness – I’m hoping this will alleviate it (and there’s a seven-euro-special one as well for gravity feeding so I can try other paints). Now, the airbrushes from aliexpress aren’t exactly what you’d call good compare to a Badger or an Iwata (in fact I don’t think they’re good enough to even dust off an Iwata), but for the kind of thing I’m doing, I think using an Iwata would be an absolute travesty of waste. Those should be used by people who know what they’re doing on very fine work, not the stuff I’m doing, which is the airbrush equivalent of painting houses (badly). They’re cheap, they’re cheerful and they should be here before March and I’m looking forward to playing with them.