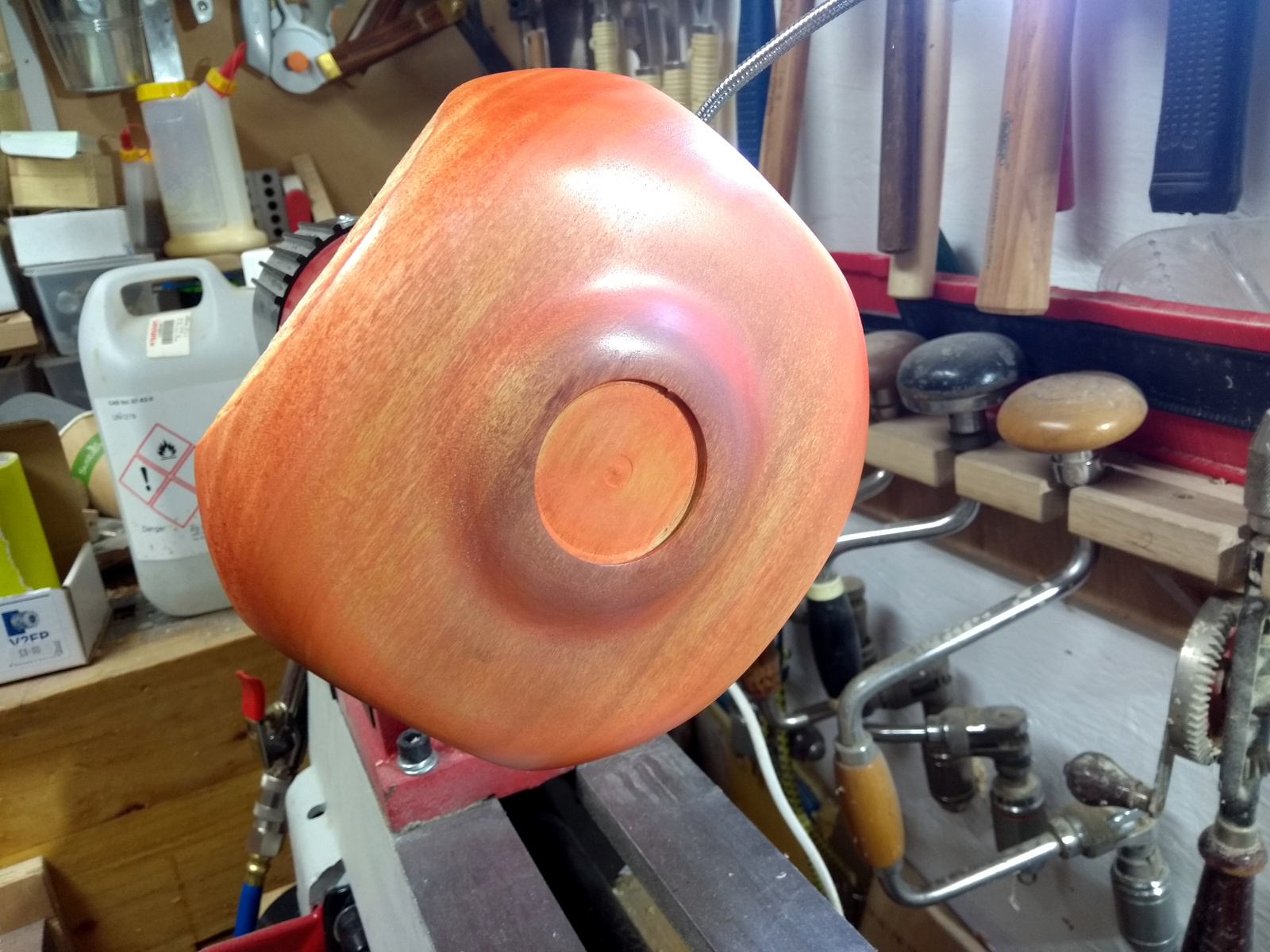 Was mucking about with the lathe last month. I was wondering if buying a thick plank and cutting my own blanks was a possibility a while back and while I’ve managed to find a solid source for them since (Home of Wood in the UK in case you’re in Ireland and looking for a source, but what effect Brexit will have is something we’ll have to see next year – I already can’t get replacement bandsaw blades from TuffSaws because of that), I still wanted to try a square bowl so I took an offcut of poplar that I had and chucked it up with a dovetail faceplate, which are really nifty little things – I have two so I can have two blanks on the go and if I take one off the lathe, I won’t have concentricity errors when I put it back on, at least none that matter for woodturning levels of precision:

Loving that natural light from the window. I do need to finish that sharpening station there by the door, and I’ve since improved on the lathe tool holder as well.

Then just fire it up and very, very carefully start cutting the curve. Those corners are fun, you’re cutting air most of the time with those which takes a bit of adjusting to.

Seeing through the work like that is just a tad freaky 😀

Mostly you just start the profile in the center where there’s a full 360 degree cut, then pull the cut out to the corners, relying on muscle memory to not just shove the gouge off that profile line so that the rotating corner doesn’t come down on anything but the cutting edge (if it hit the shoulder or the shaft of the gouge, I think lots of bad things would happen in rapid succession at a very interesting pace indeed and I don’t want to investigate that at all).

The final resul is quite nice, though that rough semi-circular bit on the edges will have to be cut away or sanded away later.

Also, I love poplar, it’s a really underrated wood, but the point of using it here was that I also wanted to play a bit with colouring the piece using stains. Blame Stewart Furini and Martin Saban-Smith.

A few layers of different stains from black to red to yellow to orange gave a nice enough effect. I mean, it’s an experiment, it’s fine 😀 I’m actually not done playing with that one, but I did want to test a new paint on the other side. I’ve tried black stain before:

And I’ve tried burning before:

And I’ve not turned any oak yet but I have ebonised oak in the past with a mix of tannin tea from oak shavings and an iron mix made by soaking steel wool in vinegar for a while:

But I wanted to know if this new paint I came across was comparable. This paint called Vantablack got invented a few years ago but the inventor didn’t release it to the general public, it’s got some sort of exclusive licence and so – as always happens – someone else invented something that did the same job (perhaps better). Stuart Semple is the chap’s name and the paint is just called Black 2.0 or BLK3.0 depending on the one you get, I got the 3.0 to test.

I also got a few more of their pigments (each of which is the MOST blue/green/yellow/pink/etc according to their advertising, I was going to use it in resin). And I got LIT which is their glow-in-the-dark pigment. Haven’t trialled them a lot since but the little bit I have tried worked rather nicely.

And there we go. Two coats on the left half, three on the right (the third is still a bit damp here). On camera, it’s a black hole. In person, well, the human eye it turns out has more dynamic range than almost any camera ever invented, so we can go from broad daylight to moonlight and see shades in both. So when you look at this in person, it’s nowhere near as featureless a void as it seems on camera, but it is remarkably black. This piece has been off the lathe while other stuff was done for a month now; it still looks as black. How it holds up to the other approaches…. well, it doesn’t sadly. You lose the effect with a topcoat and the paint isn’t very sturdy itself (it does not weather well, as they say). But it’s a neat tool to have in the toolbox.

Speaking of, I really must get this back on the lathe and finished at some point. There’s just so much more stuff to do first…