Every day’s a schoolday 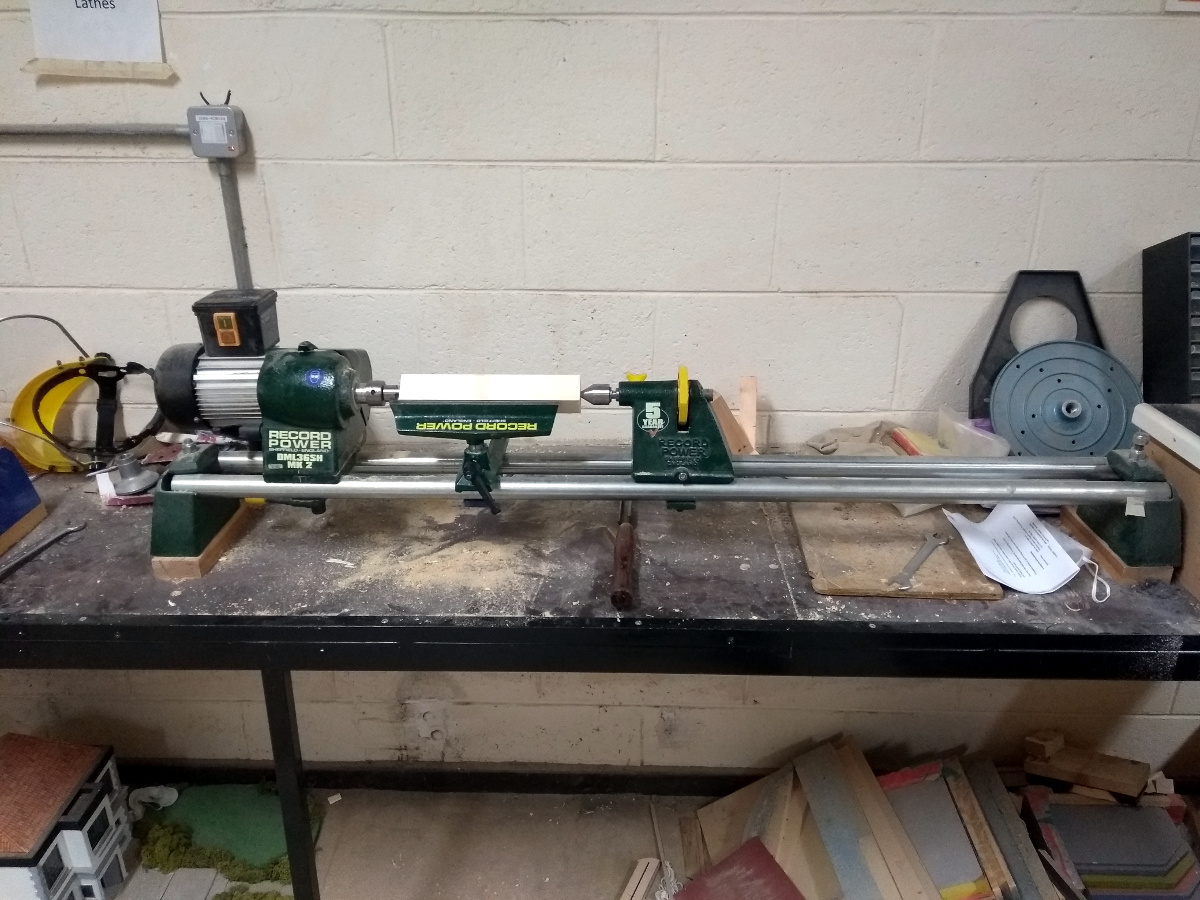 So if you watch too much youtube, you can think you know what you’re doing and with power tools, that can end suddenly and with fewer attached bodyparts, so instead of just opening up the new lathe and diving in, I’m doing an adult education course on woodturning in a local secondary school. I’m also cracking up at the school’s name – I’ve gone from spending all my life in Tiernans chasing 10.9s to spending ten weeks in St.Tiernans trying to learn not to stab myself with a gouge…

Never did get to see the woodworking courses when I was in school. It’s interesting to see it now. A lot of the comments from the older posters in various forums do rather snap into focus when looking around there.

There’s only a few doing the course (six in total, including me). Novices for the most part. A nice relaxed atmosphere to the course, a gentle intro to terminology and some basic tools and a demo and then off to do a little spindle turning with some white deal (no sense wasting decent wood on us yet 😀 ).

Okay, so noticing the many, many, many impact gouges on the masks was a bit of a moment 😀 I must bring my own next time, as well as some earplugs. In fact, I must see if I can even get my ear defenders under my mask at all. I don’t mind wearing earplugs instead of defenders, but they’re a little fiddly. Maybe I’ll get some isotunes at some point but for now, something less flashy 😀

Speaking of flashy, the lathes aren’t. They’re a mix of two varieties of old Record Power machines – half of them from before they were Record Power and were just Record 😀 But they’re all the good kind of old machine, build solidly. These things have taken about thirty or forty years of daily abuse by schoolkids and are still running well. That’s rather reassuring. They’re also a bit longer than my lathe and while they look like they’re not as tall, the headstock can rotate on about half of them (like the one I was using here) so they can probaby do larger bowls than mine can.

Straightforward spindle practice. Just roughing gouge to round, then play about making beads and coves. And since I had shown up in my shed jacket (they said wear something you didn’t mind getting covered in sawdust and shavings), I had my pencil and tape measure so why not use them? 😀

Doesn’t look as good when it stops 😀

The two hours of the first day flew past. And I didn’t kill myself with a gouge, so I achieved all my goals for the day. We’ll see if I can keep that up for another nine weeks.

And in the meantime, I have a lathe stand to complete, and a lathe to mount on it, and a shed to tidy and then I need to start looking into places to source beginners tools and materials from (I mean, if I wanted cryogenically treated M2 HSS steel tools that professionals can use, I’m sorted, but the “This one’s okay and we won’t cry when you mangle it with the grinder trying to sharpen it” grade of tools is a bit less well advertised for some reason. And the vast majority of my tools to this point have been vintage stuff from last century bought off ebay; not sure if I can do that for this as well.