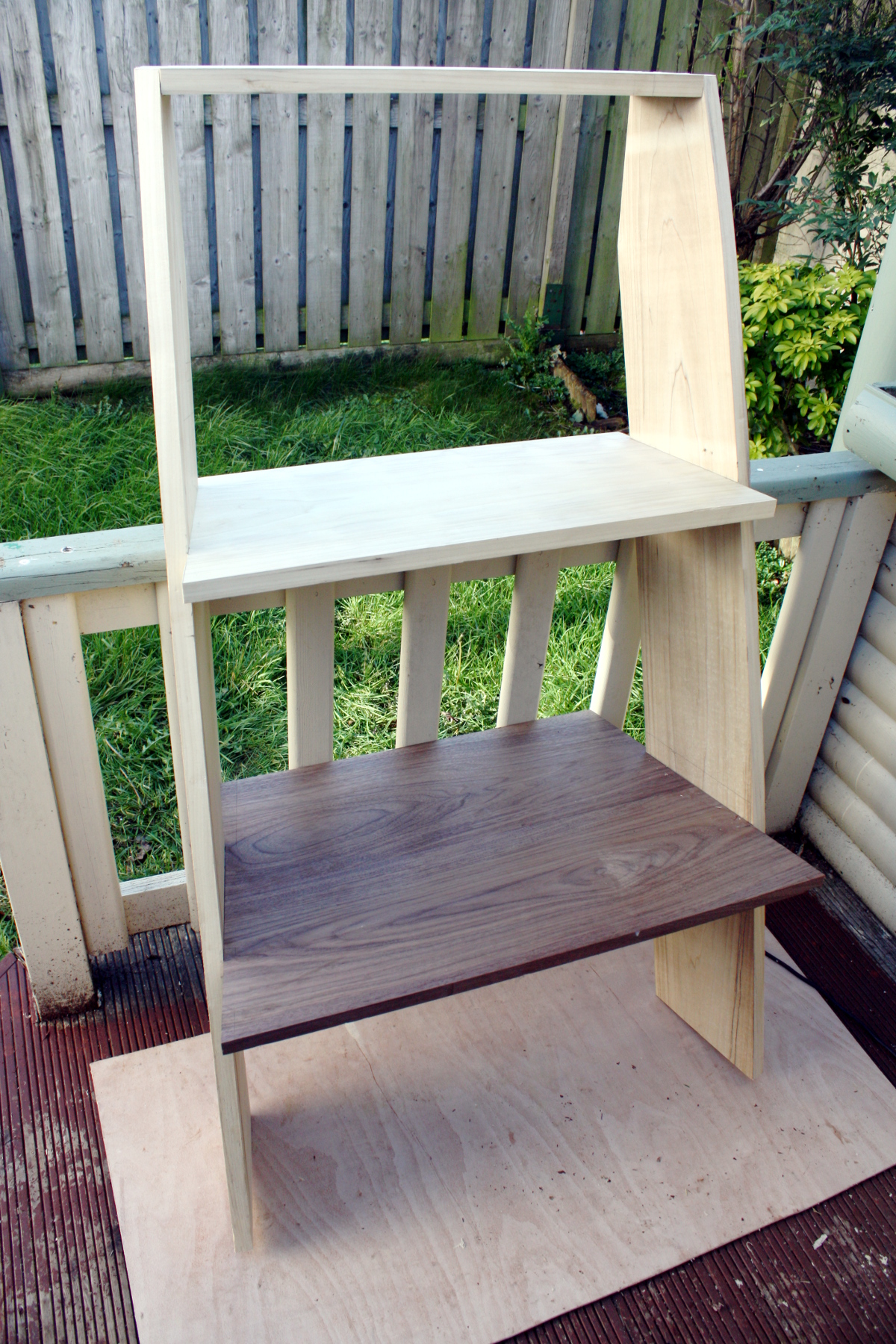 More shed time today, and I spent the first half of it fettling the middle shelf in the desk. Straightforward, if repetitive process – assemble, check what’s too tight and what’s too loose, cut or pare the shelf a little narrower with saw and chisel, reassemble, recheck, repeat until the dovetail joint that was horribly stressed by the shelf being too wide:

…is no longer stressed, but just snug:

And doublecheck all the other joints to be sure nothing else is opening up.

Okay, I’m happy with that.

I’m also happy because before assembling this, I marked out the back of the top of the sides to show which bits had to be cut off to give a straight line across the back (because the top goes up against the wall for support), and when I assembled it:

So, now time to get rid of all the straight lines! Out with the French curves and the compass.

And also did a bit of marking with pencil of various things to know what goes where when assembled. Then I broke it all down and spent some time with the bandsaw, various handsaws, chisels and my favorite spokeshave to shape the shelves.

Not done yet, but nearly there for the walnut desk, and a little behind that for the middle shelf. Once they’re done, it’ll be time for inlay and decorative stuff. I need to order some resin for that, and do some testing. And there’s be the light fitting and cable chasing and then finishing and then final assembly and that’ll be that.

Meanwhile, there’s another project I want to start on because I’ve been watching Ron Aylor’s latest bout of carving recently and I’ve been wanting to go do some. But that will require some oak to be prepped. I have some but…

Well, I’ll have to dig it out…

I’m kindof shocked really. I pulled four boards (because why dig that much for just one?) and with the #05 got one face to sit flat on the bench. That took about 25 minutes in total.

Then I fed all four through the 734, dropping thickness by about 0.4-0.5mm on each pass, and alternating sides once the first uppermost side was flat. That took 20 minutes to give the boards above. That would normally have taken all of this week’s evenings with the scrub plane. That’s a massive boon, I think it’s obvious the 734 is going nowhere. I mean, it’s not my idea of a finish planing, it’s very rough milling but still. That’s damn useful.

Now, I want them a few mm thinner, but it was getting late and the 734’s noisy, so I’m leaving them to warp and cup overnight before doing the last few passes in the 734. And also, I think I need to (a) clean up and (b) sort out something about extraction…