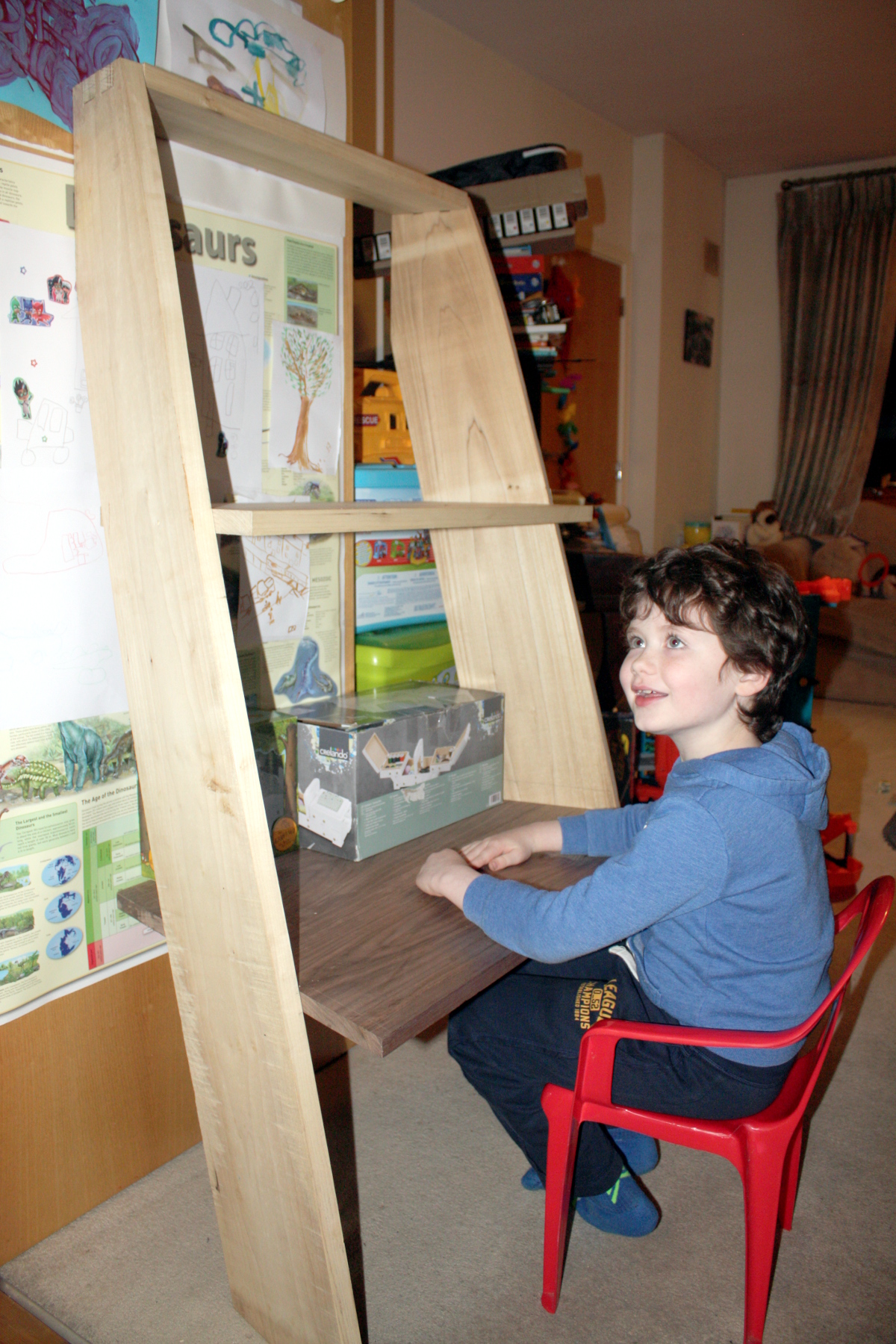 Some more – increasingly rare – time in the shed over the last week or so, and I started cutting the top shelf for the desk.

While I had the desk assembled to this stage the last day, I scribed the top shelf angles with pencil and set the board aside. Then this week, after thinking about it a bit, I double-checked the angles of the sides of the walnut board – because it’s the core around which all this is built – and then I used the angles of the walnut board, and the width from the scribe marks (and yes, I double-checked that the sides were plumb to the desk before scribing), and used those two to cut the top shelf.

I didn’t cut them according to the scribe marks’ angles because there’s a little bit of twist in the sides (not much, maybe 4-5mm over the full length of the sides, and the sides are poplar, not oak) so the top shelf should be pulling them back to the walnut board’s angles, not locking in their twist.

And of course, because it’s an angled cut on the end of the board, the dovetails get interesting.

The angles that would work on a straight edge obviously do not work on an angled edge because the line of the grain is no longer at right angles to the end – if you just cut the dovetails with no change to the angles, you’d get all manner of issues with the look of the joint, and with its mechanical strength due to some horrible short grain issues. So, like with everything, there’s a complex way to do it where you do all sorts of maths to figure out what the angles should be, or, there’s a trick (actually, there are two tricks, but one involves spending a few hundred euro on a Bridge City Toolworks bevel and sod that for a lark).

You also don’t cut both sides to the same angle – one side (in my case) is a 1:6 slope and the other side is a 1:8 slope. It doesn’t look right otherwise because of the angles.

I marked off the spacings using the normal two-dividers approach though.

With the marking , the sawing is nothing fancy (you can’t use guides, you have to saw to the line by hand – but that’s not that hard so long as you take your time).

Some tidying up with chisels and that’s the board ready. Next, hold it in place on the top of the relevant side, misalign it, swear a lot, erase pencil marks and retry until you eventually manage to hold a two-foot-plus board at a perfect right angle to an edge that’s five feet up in the air while drawing around it with a pencil.
I mean, it’s doable, but you learn new swear words.

After getting the transfer of lines done, the rest is standard dovetail fare. Cut them, fettle a lot with chisels, swear at gaps, the usual dance. And then repeat for the other side.

At that point, I assembled the carcass and found that the left dovetail fitted fine, and the right dovetail was hanging in mid-air an inch clear of the right side of the desk. What the…

Turns out, the middle shelf was too wide by a few mm. Out with the #04 and I shaved down the width by 2mm on each side (not all at once, it was a pare-and-fit job) and eventually I could assemble the entire carcass.

That middle shelf is not done yet though; it’s still a few mm too wide at the back, while being about right at the front but the end result is that there’s a lot of stress on the right hand dovetail joint:

There’s a whole 2.4mm of a gap there at the bottom, purely because the shelf is spreading the sides (I assembled without the middle shelf – it went together perfect square and true). I have some more fettling to do there tomorrow. But that wasn’t the point of this assembly (or bringing it indoors for that matter), it was more to check sizes. That desk seems so low off the ground that there’s no way it’s right, right?

It’s now all back in the shed with the middle shelf removed. Tomorrow I’ll work on fettling that middle shelf fit and when that’s good enough, I’ll take the desk all apart and begin work on inlays and decoration and shaping. The inlay won’t be entirely conservative – the client isn’t a huge fan of traditional marquetry because he can’t spell “traditional marquetry” yet, but an inlaid race track for cars would be cool, and an inlaid blue ocean on which to recreate the death of several hundred people in the freezing waters of the north atlantic would be a very desirable feature apparently. I don’t know, don’t ask.

I also want to cut a 7mmx13mm channel in the underside of the middle shelf – that’ll house an LED strip in an recessed aluminium channel with diffuser (ebay’s a great tool these days). That does mean I need to figure out a way to run a mains cable from that shelf to the ground, in a way that doesn’t lead to a seven-year-old finding a way to pull it out of the desk and strangle the cat with it. Anyone know of a neat way to chase a cable through a piece of wooden furniture over a distance of around five feet in total? No, cable clips are not okay, and just routing out a channel and epoxying the cable in seems somewhat unmaintainable…

Speaking of routing, for some of the resin and the LED channel, I thought I might go back to the beast and try that again, but this time with a better way to hang on to it.

For the rectangular channel for the LEDs, a chisel would be just as good really, but for irregular pools of freezing-cold-north-atlantic-ocean blue resin, the router does make life a little easier.

Speaking of, I need to experiment a little with the resin. I have some ideas…