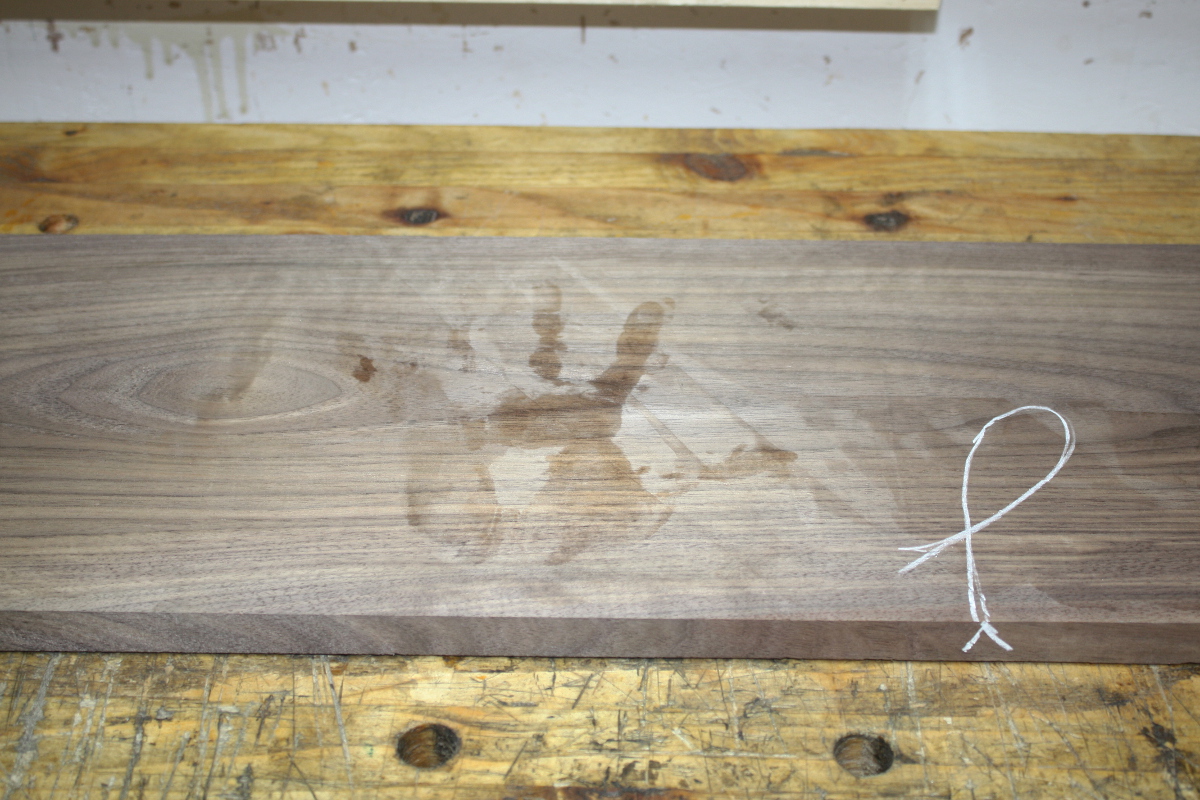 Long week. Lots of hours in the office and zero hours in the shed till the weekend. One of those weeks. But, the post kept coming in… 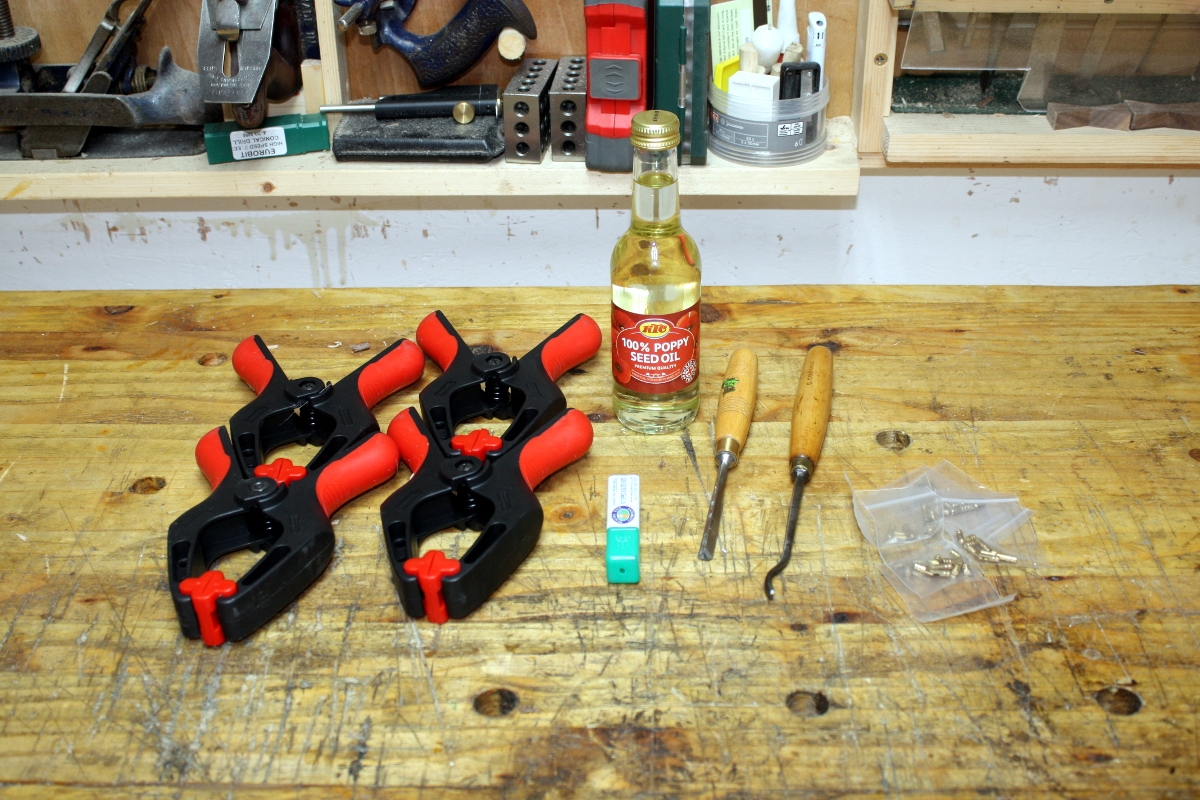 Granted, the clamps were a lidl special (but I’ve been using some for the last year and they’re really quite handy – I could use a few more f-clamps and one wooden parallel clamp to help with morticing and I think I’m good after that). And the poppyseed oil is food grade from the local indian shop, so no drying agents, but for a light oil finish it might be useful. Worth a try at any rate. As to the rest: 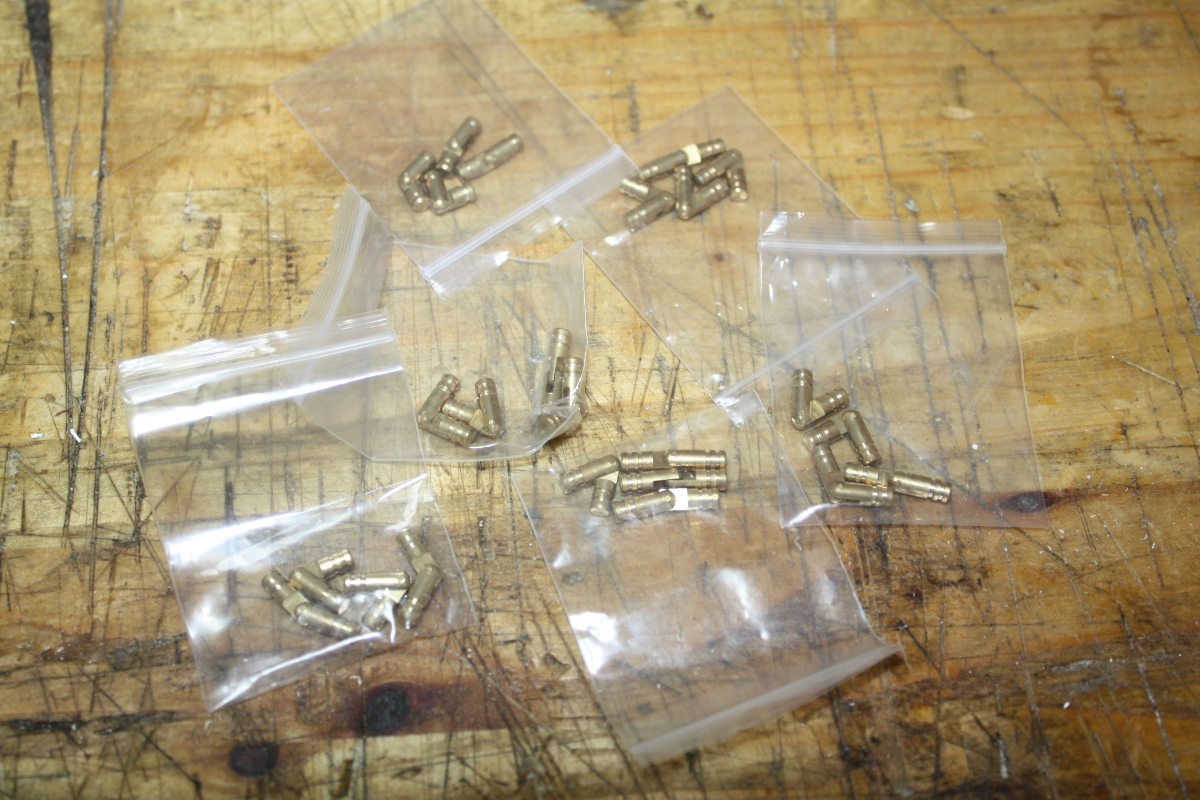 Some of China’s finest box hinges. I mean, they’re not that great, but they’ll do to practice with before going off to Isaac Lord or Brusso or someone. 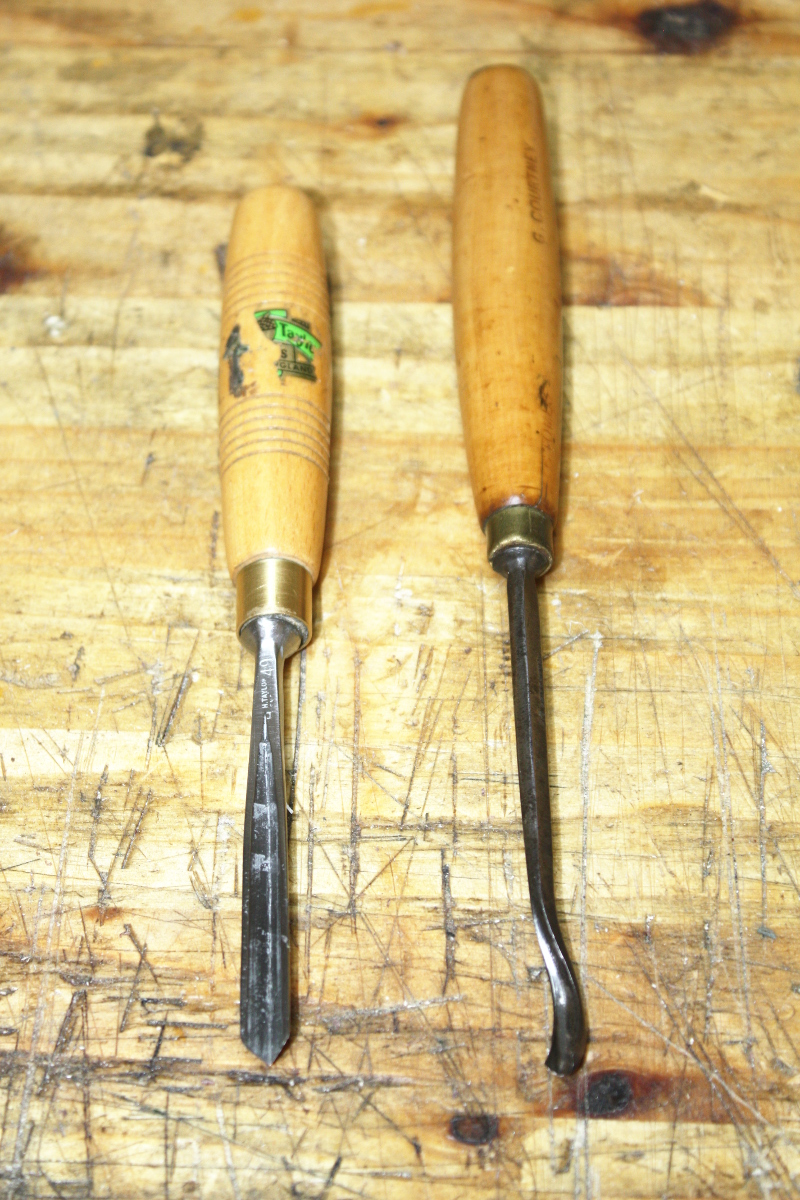 A nice v-tool for the oak panel carving for the Peter Follansbee stuff, and a small spoon gouge for doing the endgrain carving trick – my gouge for that isn’t quite as easy to get scoops with and I’m hoping this will help. 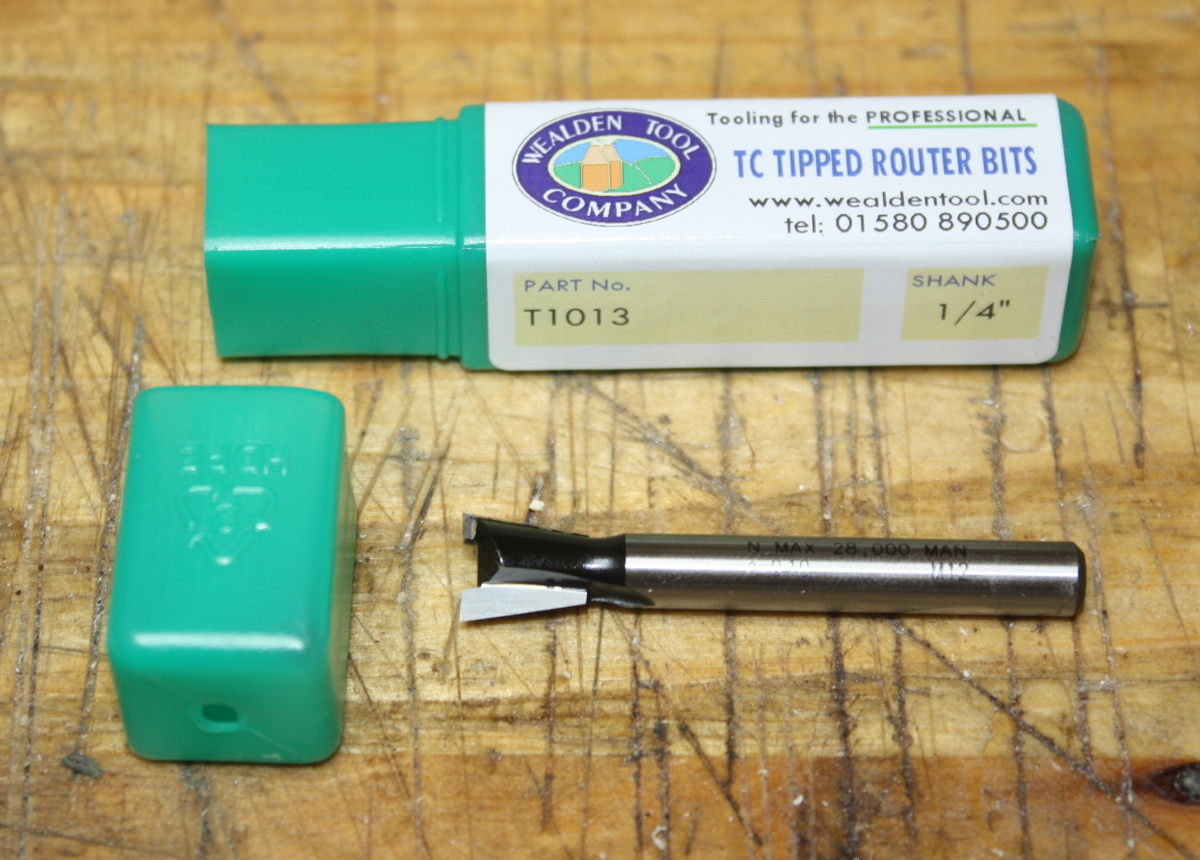 And then this, a dovetail cutter for the router for the sliding dovetail joint on the shelves. It seems too small to me, but I asked a few cabinetmakers who do this sort of thing and they say it’s fine. So, on to the build again. By the way, that friend from the UK who sent me the fantastic veneer convinced me to write this up on the forum as a build thread as well, so it’s going up there as well as on the blog, but the forum thread might be a tiny bit more focussed on the build. 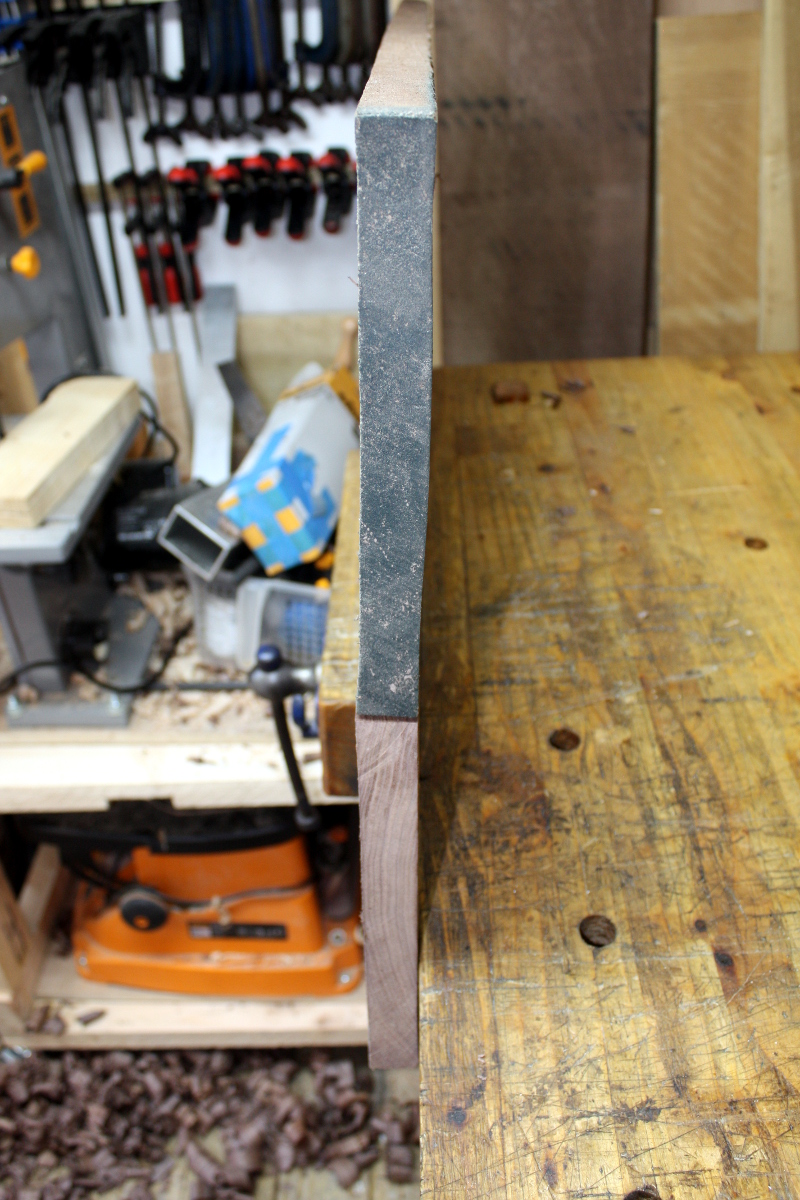 That’s not parallax. After cleaning off the glued faces with a quick swipe of the plane, I put them back together and yeah, there’s major differences in thickness there. Plus, one of the boards is very uneven, so some serious milling is needed. 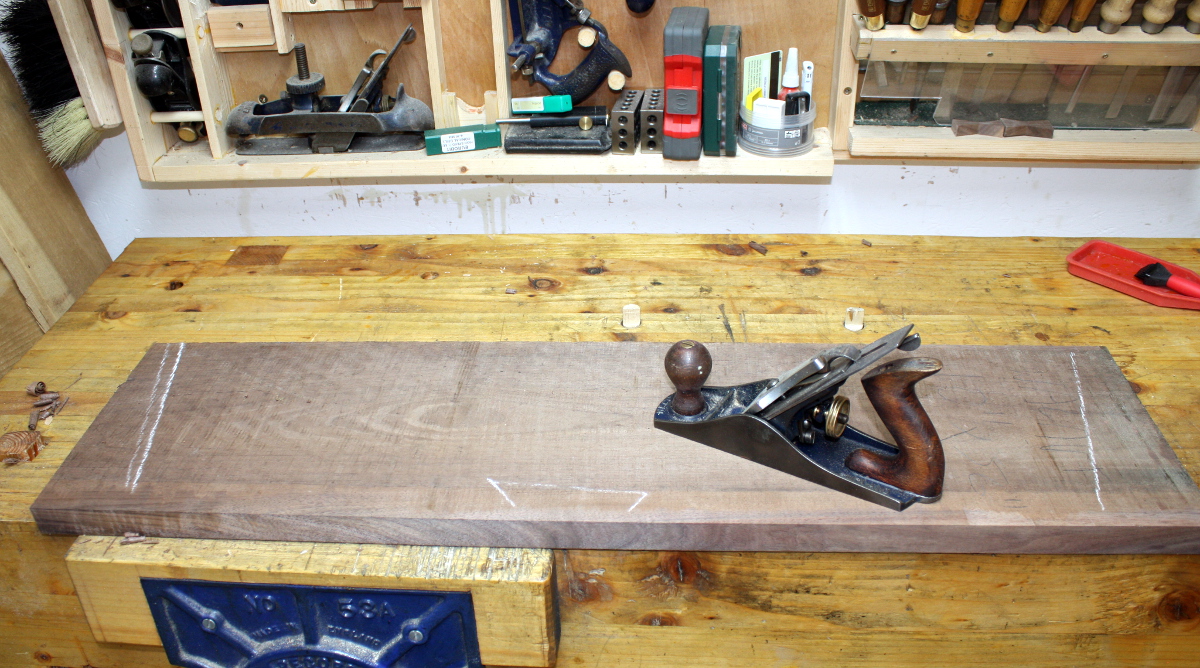 Time to break out the new scrub plane, get the board butted against some dogs and the planing stop and then hack into it. 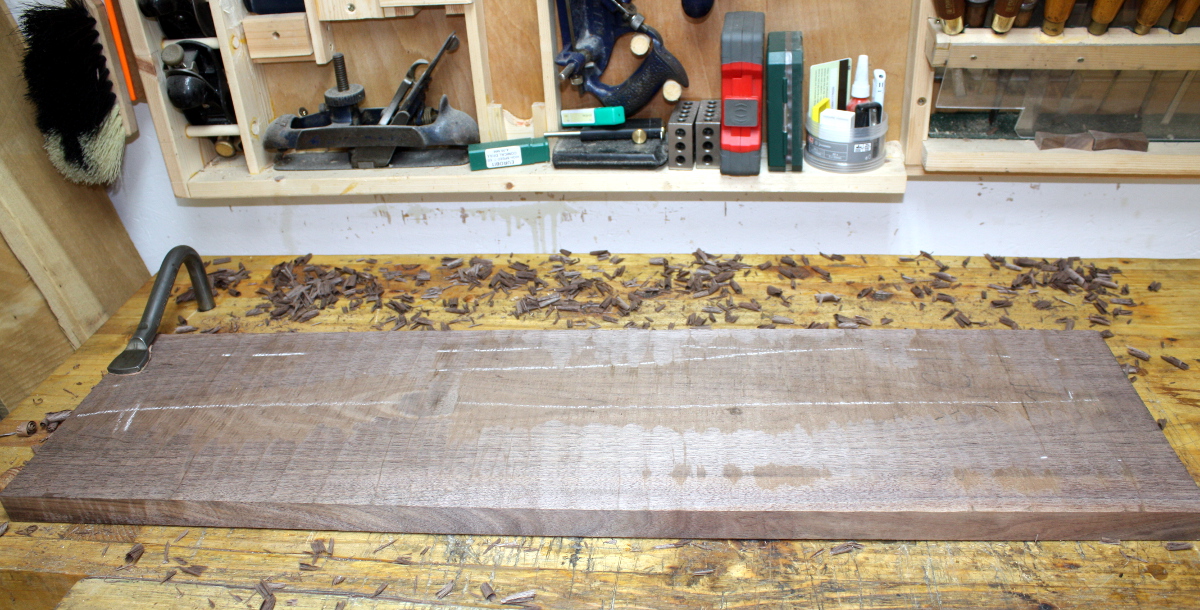 First pass shows large hollows. Second cross-grain pass didn’t get rid of them. Gone by the third though. 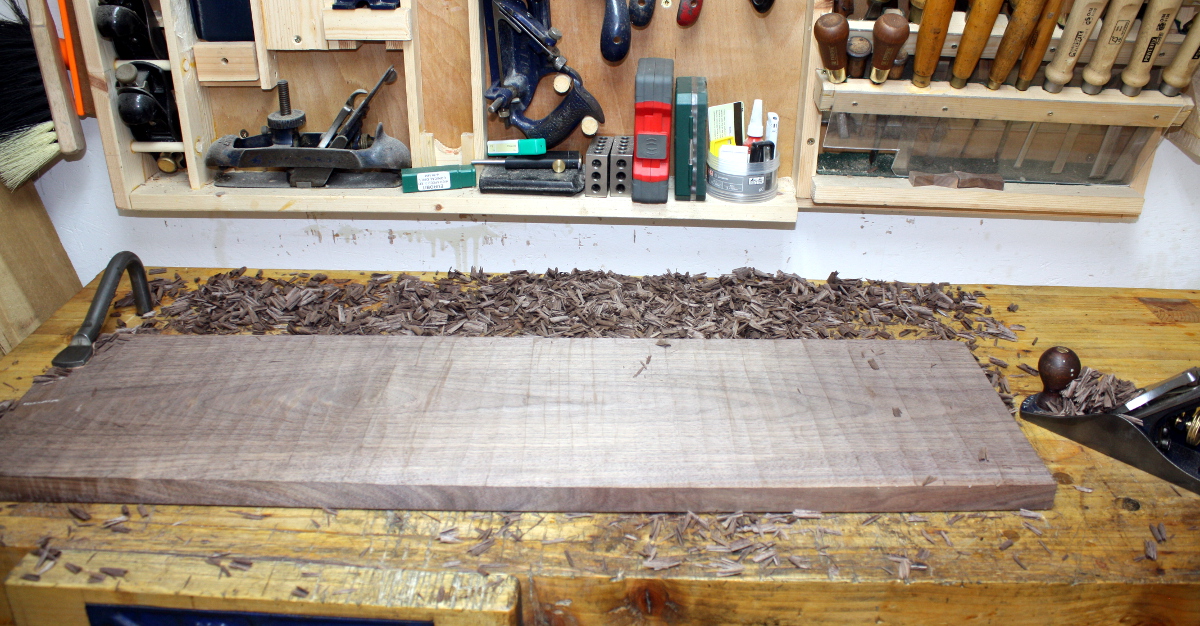 I mean, nice grain in the board but that’s sweaty work. 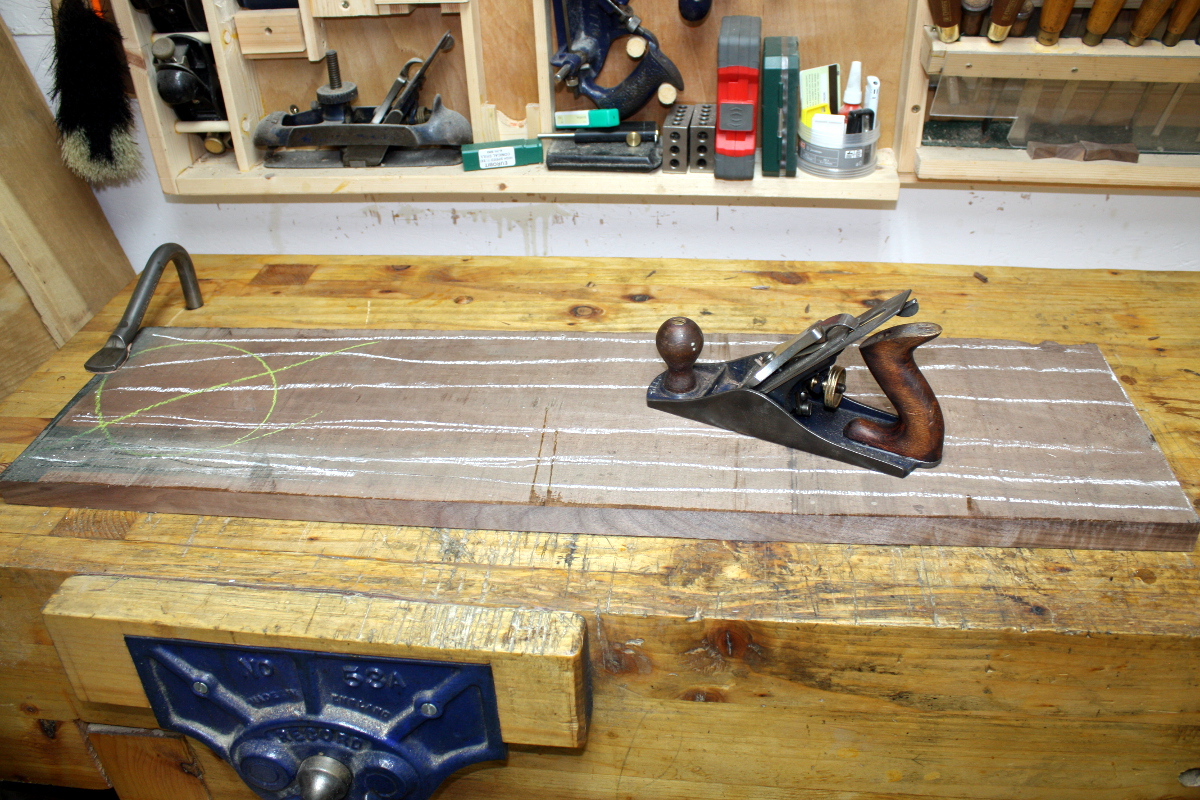 Flipped it, chalk lines down to monitor and then on we go. 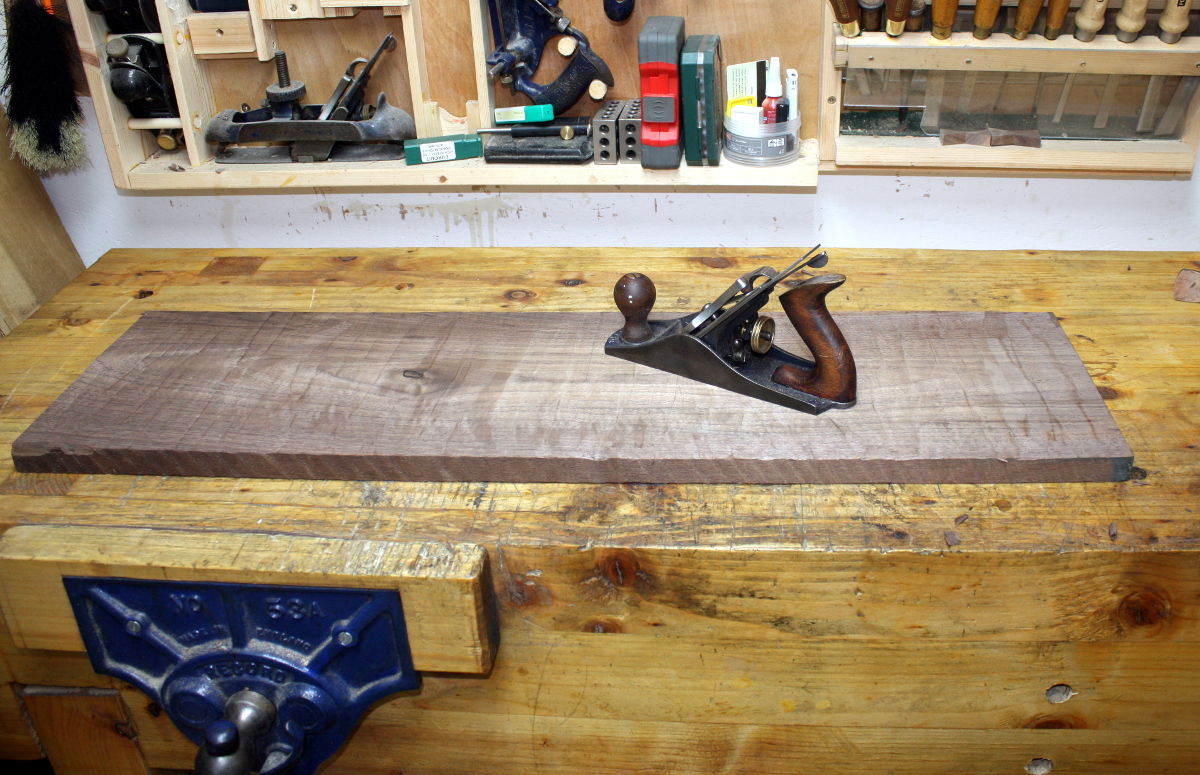 This time a major bump right over that knot. Took six or seven passes to get it down to acceptable (this is the underside). It’s still not dead flat, but I could chase my tail on this all day. It’s twist-free, should be okay. Don’t forget, I still have to prep this again after the glue-up so I can sort it then if necessary. 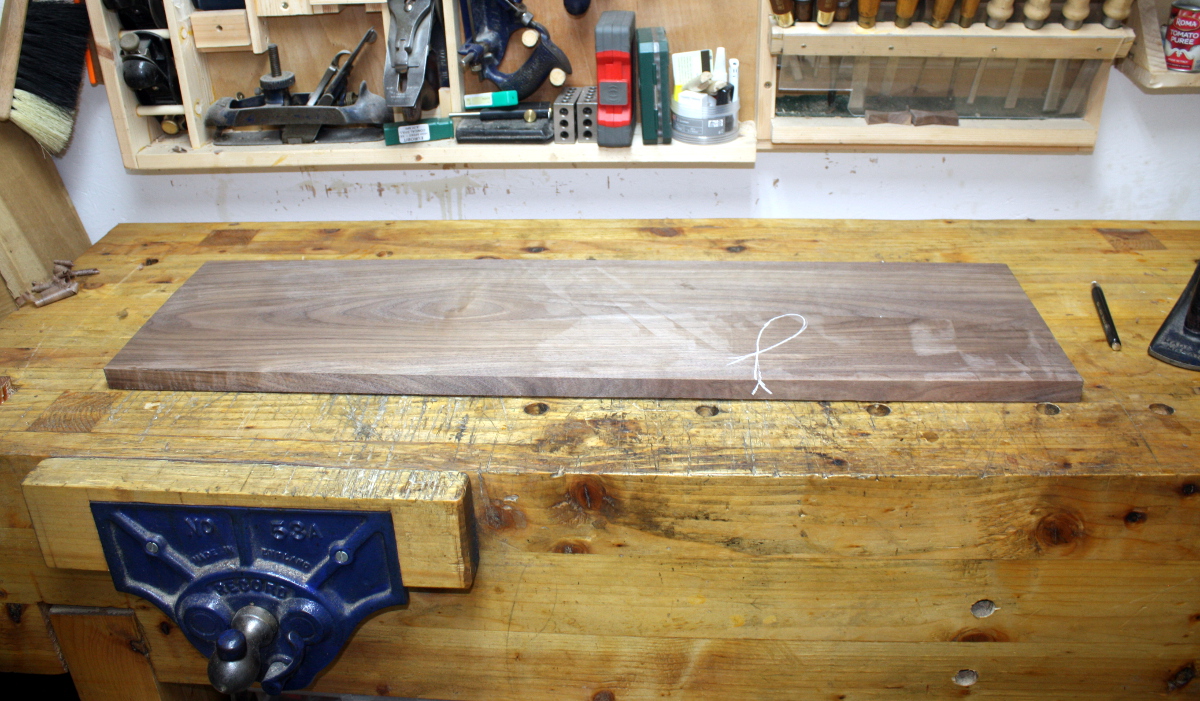 Like I said, sweaty work. And of course, now the board is not so thick, and the other board is a happy smidge over an inch thick, so I planed the face flat and out of twist (there wasn’t much, it took about five minutes of staring at it and swiping bits with the #05), but then the pain in the fundament bit: 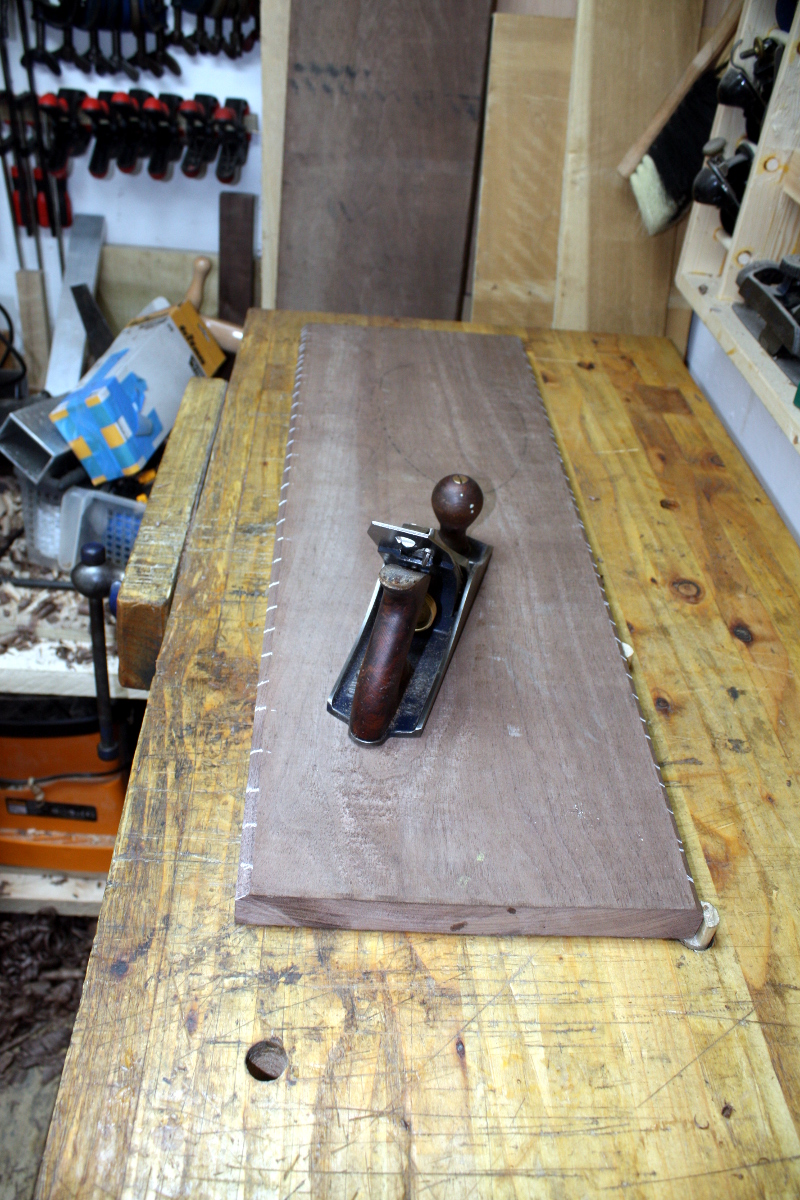 The board is a quarter-inch too thick. I set a gauge on the other board’s thinnest bit, marked off the sides on this board (and the other to check) and then planed a chamfer on this board’s edges to stop spelching and marked them off with chalk (because it’s dark wood, normally I’d use pencil) to monitor progress readily. And then it was a case of many, many cross-grain passes. Even with a heavy set on the plane, it took ages and I managed to remove the skin on my little finger and get a nice large blister on my palm which will be so much fun this week as I spent the entire week typing.

Honestly, I spent a full hour today pricing a Dewalt 735 thicknesser. And I’m running out of reasons to not buy one. Thicknessing stock is just not interesting, it’s dull, heavy donkey work that only delays the completion of the job, and I don’t like it.

Not even finished really. I have to spend another ten minutes on this with a #05 but I had to stop and leave it there before I tore open the blister and that would have been too much fun for the coming week even for me.