I only just finished digging that sodding thing out!

And I’ve not been getting much done in there thanks to subzero temperatures and public transport making the work commute into anything up to a six-hour-a-day nightmare (yes, a foot of snow won’t slow down Canada, but Canada spends more on their snow clearing hardware and people than we spend on Varadkar’s Spin Unit…). Mostly I’ve been putting together new tools for some things I’d like to try, namely stringing and carved arcading. So for the stringing, I already have the dead fancy radius cutter from lie nielson (probably the most bling tool I own), and a small perspex scrap to give it a pivot point when working on some of the usual designs: 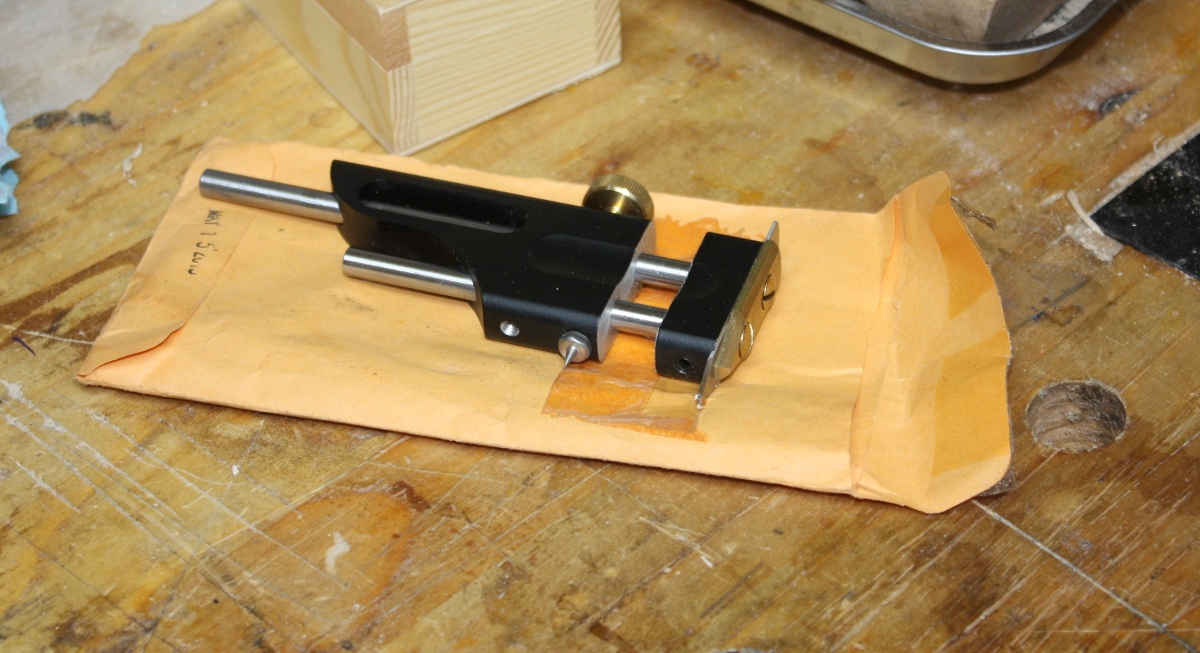 But I haven’t got a straight line cutter because I figured I should be able to make one, they’re basically a marking gauge, see the lie nielson one: 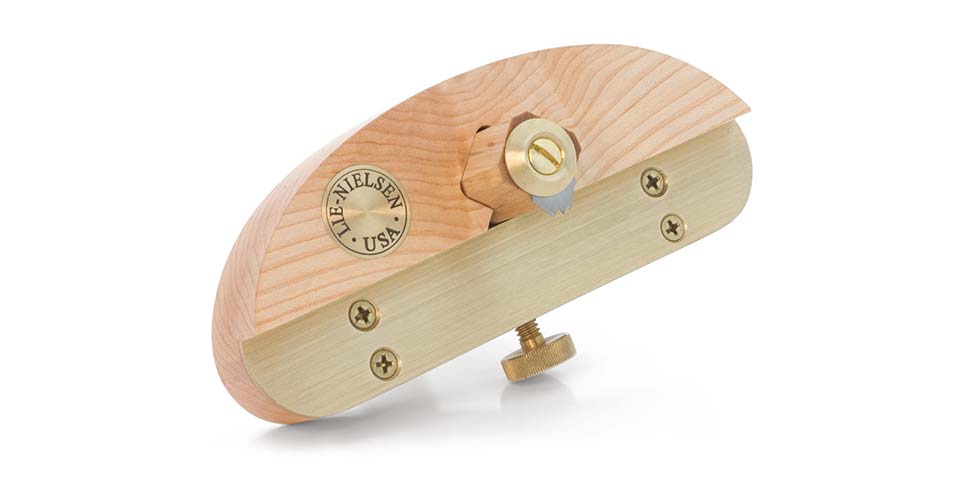 Fancy, but basically just a marking gauge. So I ordered a spare blade from the lie nielson cutter to skip the whole metalworking bit because hell, learn one thing at a time. Then I laminated two scraps of white oak, cut and squared a stem from another scrap and chopped a mortice (and a rabbit on the base). Some test fitting, adding the blade in a little recess and… 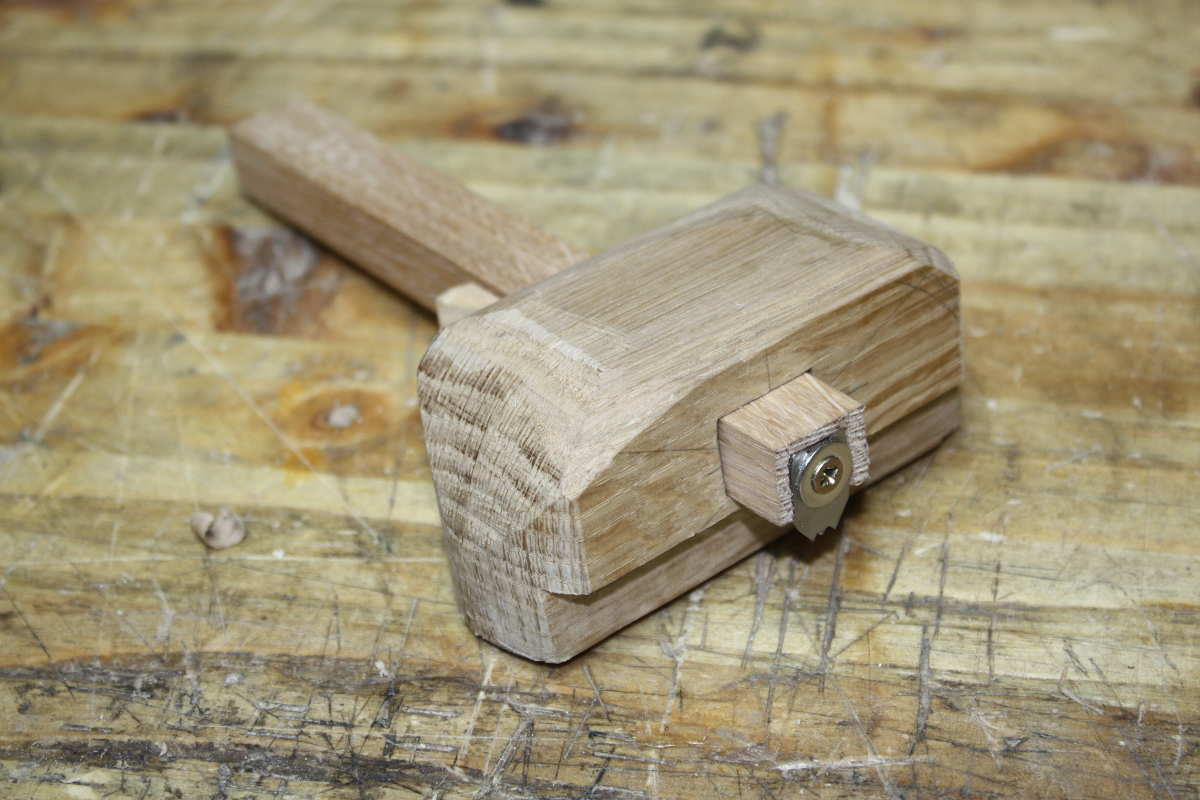 Mind you, it doesn’t work. The mortice isn’t good enough so the beam isn’t at right angles to the fence, so the blade gets dragged along while skewed so you don’t get a nice thin cut line, you get a wider scratched mess. I think I’ll take out the beam, add a brass strip inlaid on it for a bearing surface and use the brass thumbscrews I have here as a lock. And I’ll remake the fence from a single thickness scrap piece of something; it’s too thick to cut a mortice accurately through (at least for me). Some guide blocks when morticing will probably help too. It’s not hard, but it does take a mite more care than I used on the first try.

Also, I’ll need to cut strips off the veneer to make the stringing, and I was finding my marking knife wasn’t up to it and neither was my heavier stanley boxcutter, both would be fine for a few inches and then wander off the line following the grain. So I got this:

Think pizza cutter. But with a tungsten carbide blade. It’s normally used for cutting cloth for quilting. Doesn’t get dragged off to either side by the grain as much as a normal knife that’s embedded in the grain would because with the wheel, the cutting surface is constantly coming out of the wood so the material hasn’t as solid a grip on the blade (which is precisely why we use these for pizzas and the like). Tested it already and it works like a charm. My veneer on the other hand, is too thin; I need to source better material, which I’ve had some pointers on from the UK forum. 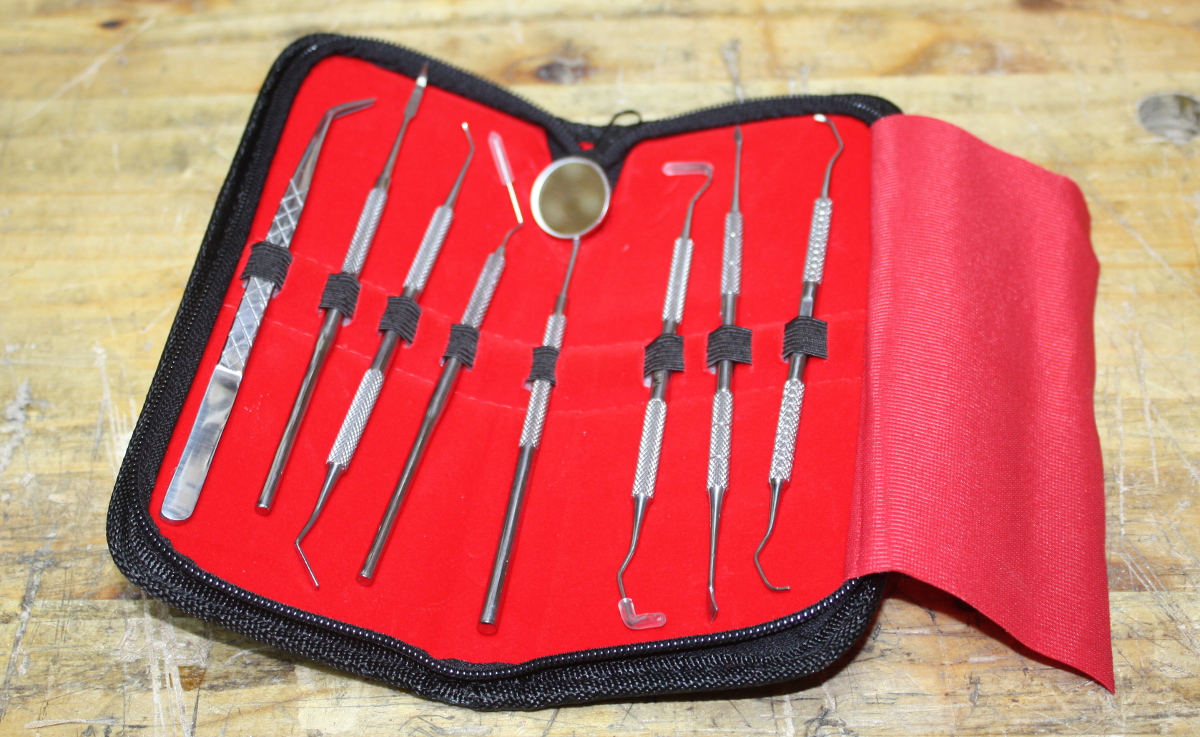 And for cleaning out the stringing lines before gluing in the stringing, a dental pick is a pretty decent tool and dirt cheap on ebay. You get the oddest looks in the office when it’s delivered, mind you… 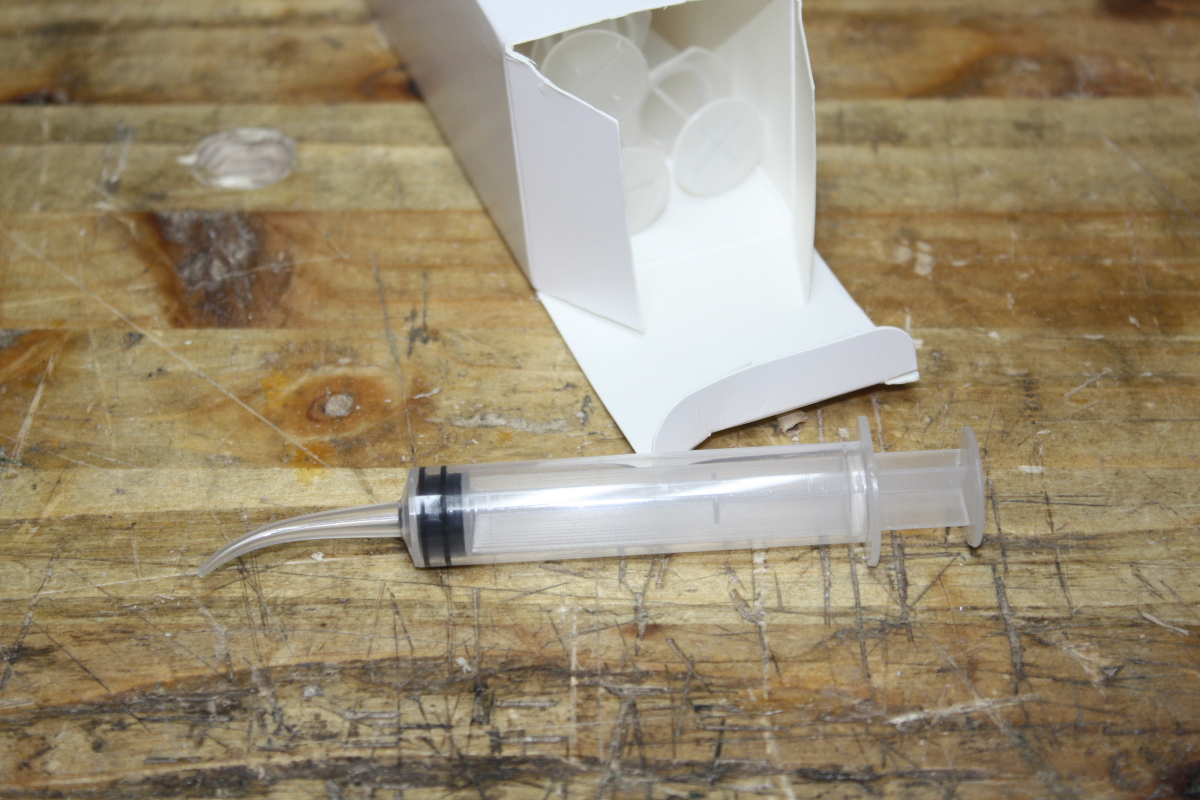 ….but the looks you get when you order the syringes for putting glue in the stringing grooves surpass anything I’ve seen so far 😀

I also had to restock on glue and got a bunch of liquid hide glue in a sale on ebay so that should be all the glue I need for the next year or three (it’ll go off before I get through all of it I’m guessing). So I think I’m set right now for everything but the veneer for stringing; I’ll sort that out while I fix the straight line cutter and then start experimenting.

Meanwhile, Peter Follansbee did a nice blog writing up how he does carved arcading; I’d like to give this a go myself, it looks like fun:

It’s just damn pretty in walnut. And it looks terribly complex when finished, but like a lot of this period’s carving, it’s all geometric and done by leveraging the characteristics of tools rather than being some kind of sculpture that relies on twenty years of experience (which would be harder to try).

I do need to get one or two gouges that are larger than what I currently have so I got a nice three-quarter-inch one for a few euro off ebay again:

And between that and one that was a present from an old friend, had a go at the basic core elements to see if it was even possible (here in an oak scrap rather than walnut): 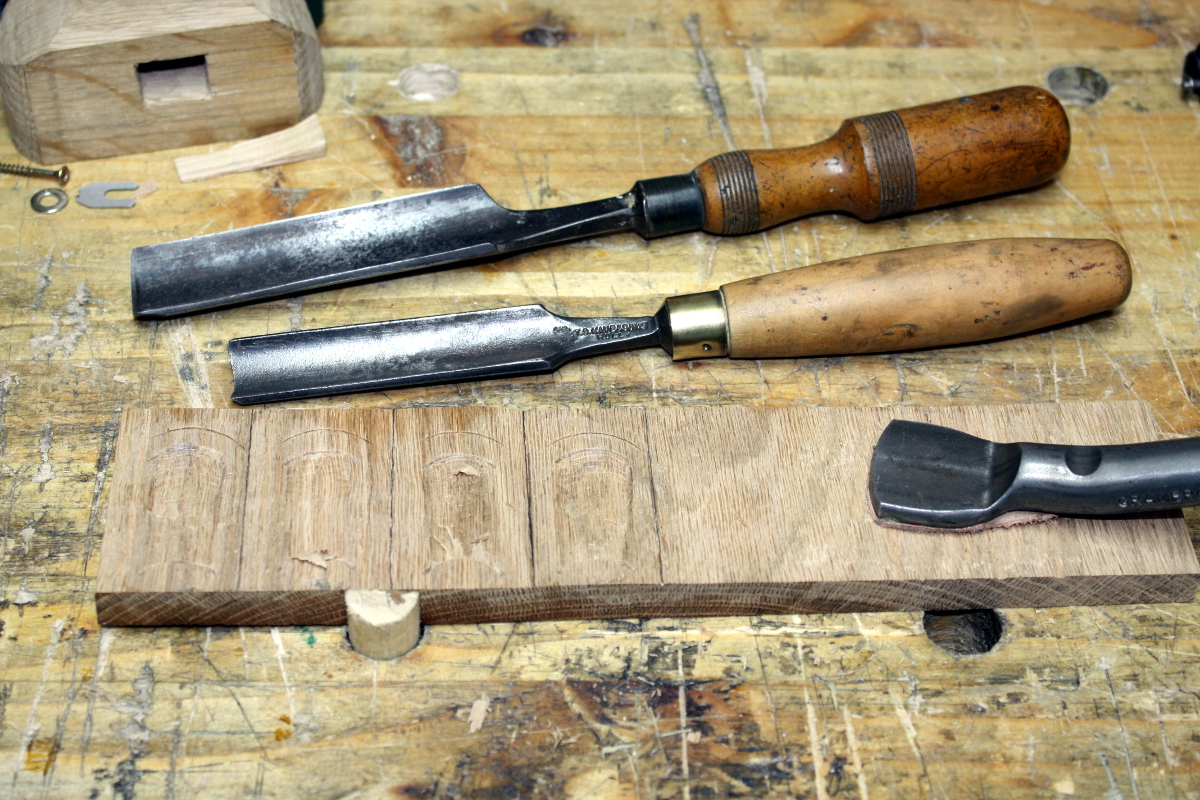 It’s somewhat easier than the v-tool work that I’ve been practicing (and not getting hugely better at, though having better sharpening kit is making a difference): 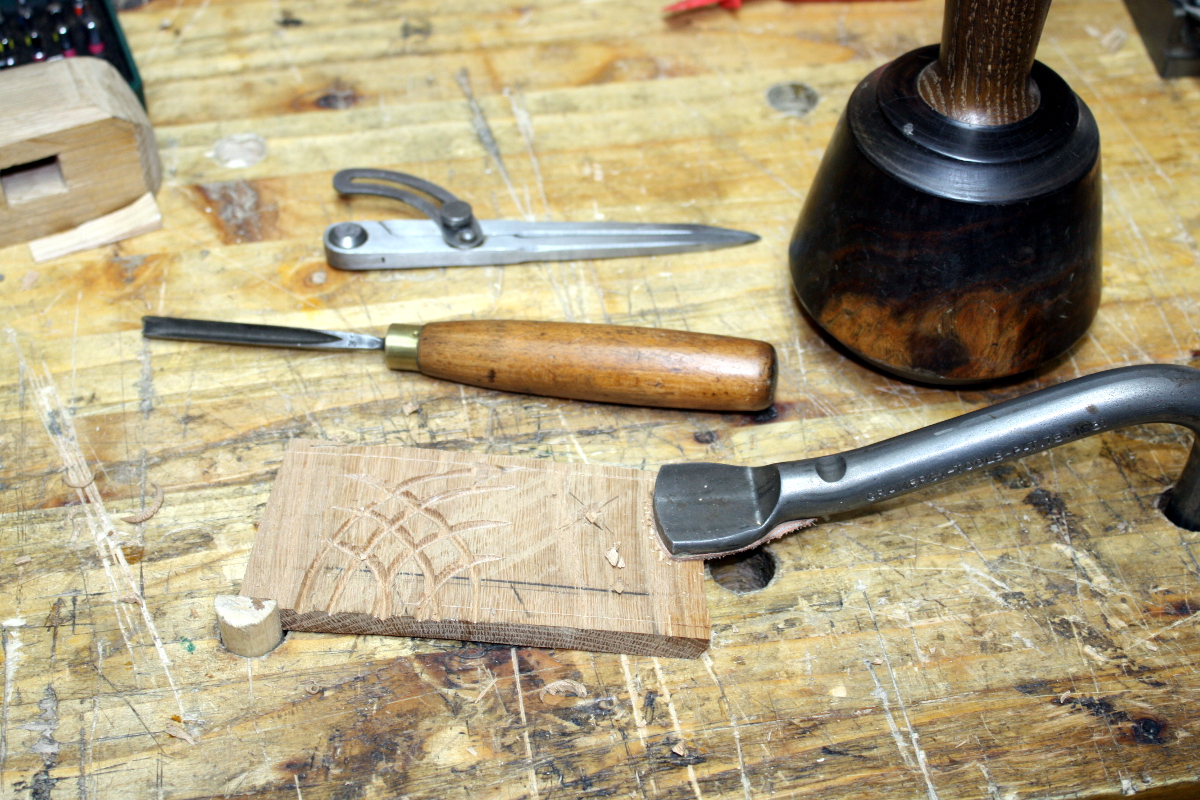 Something else to get back to, when I dig the shed out again…. this whole thing of letting the north pole melt and turning off the north atlantic current and ruining the climate is playing absolute hell with my shed time… 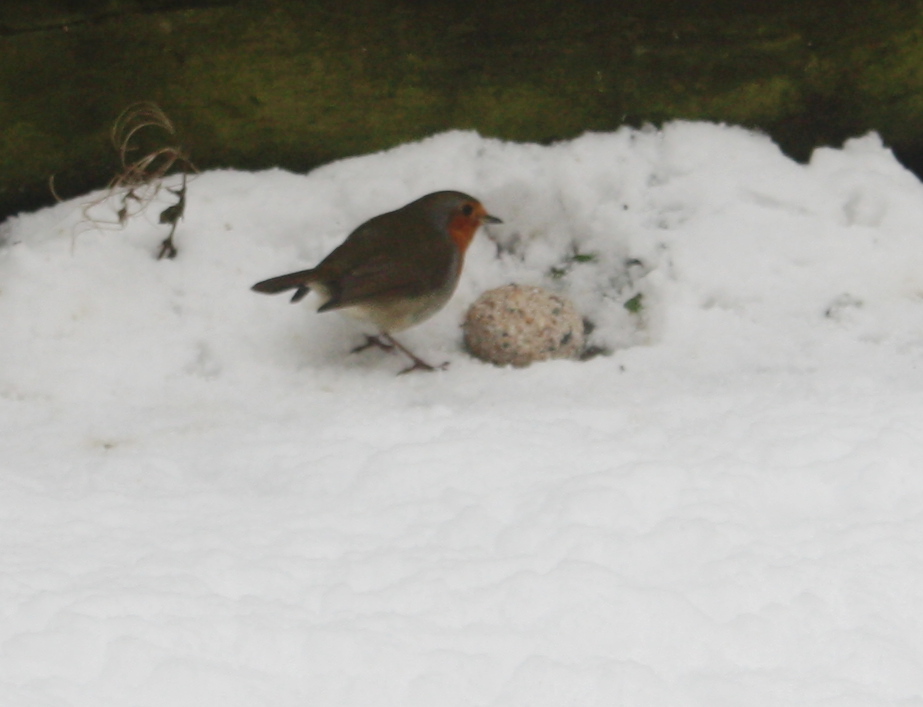 It’s not even for the birds!