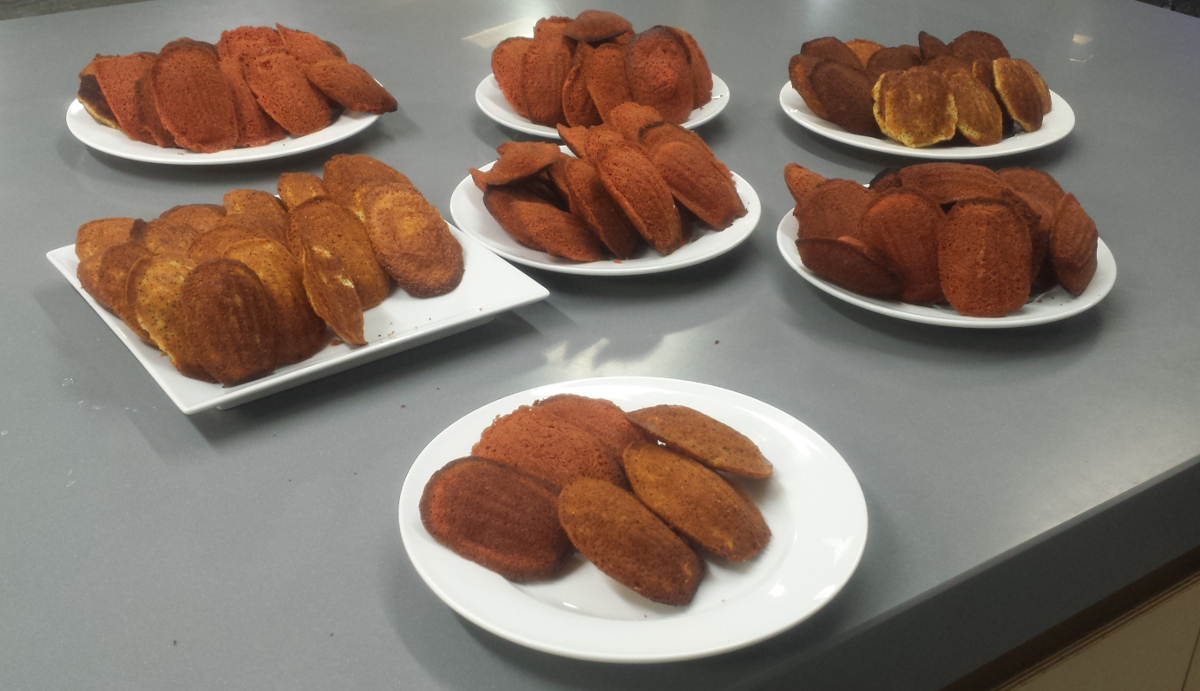 Well, this post has sat around as a draft for two years now, so maybe I should finish it…

Anyway. Madelines. Small crunchy-on-the-outside citrusy sponge cakes that are brilliant with a cup of tea in the morning. Yes, crunchy. If you’ve had them and they were soft, they weren’t fresh. They go soft as they go off.

Also, you need a special pan. Yes, you do. You can pour the batter into anything but it won’t be a madeline, the same way it’s a stew instead of a tagine unless it’s made in a tagine or a casserole has to be made in a cassarole or a … you get the idea. It’s one of those named-for-the-dish cooking vessels. For madelines they look like this: 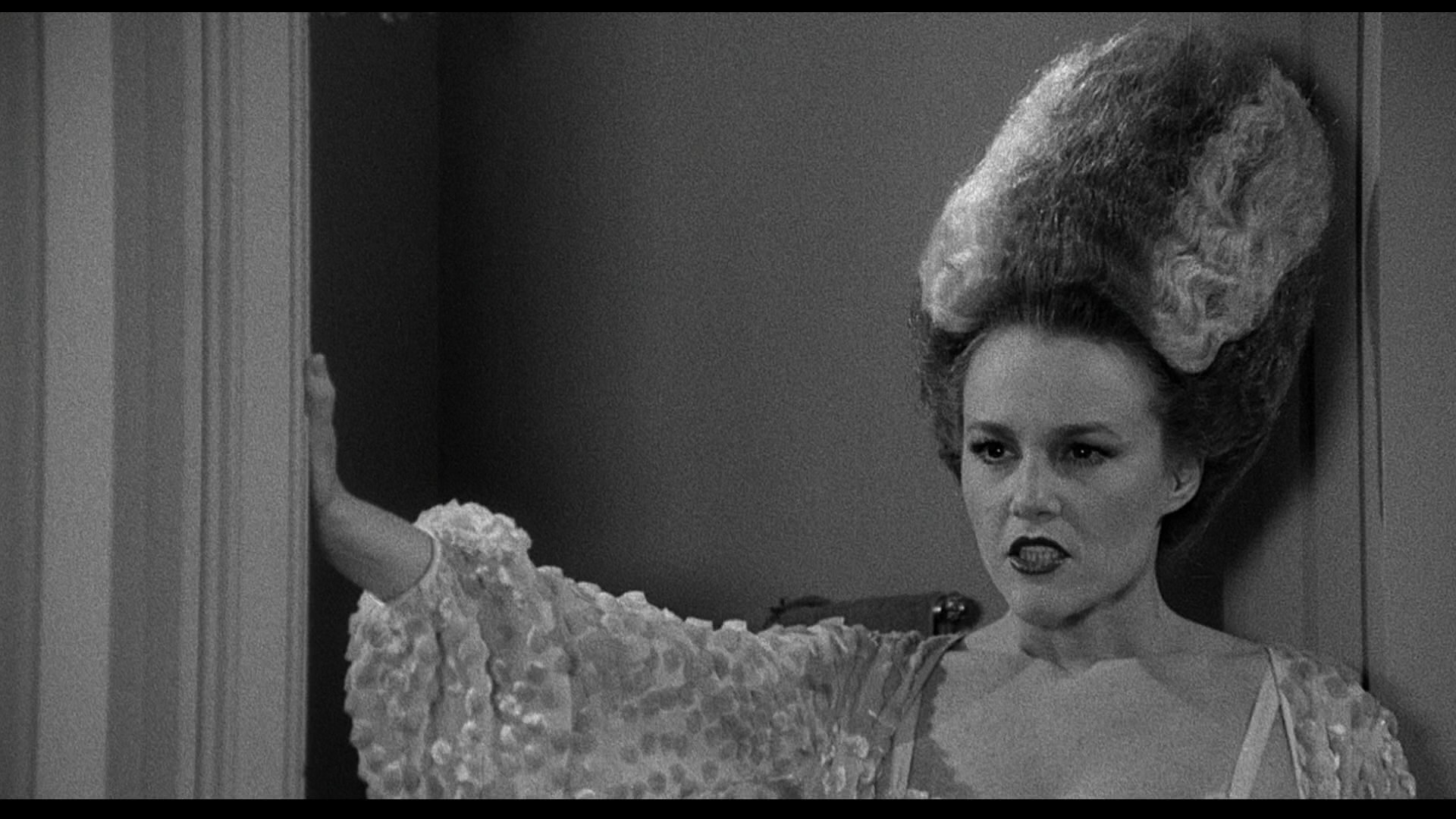 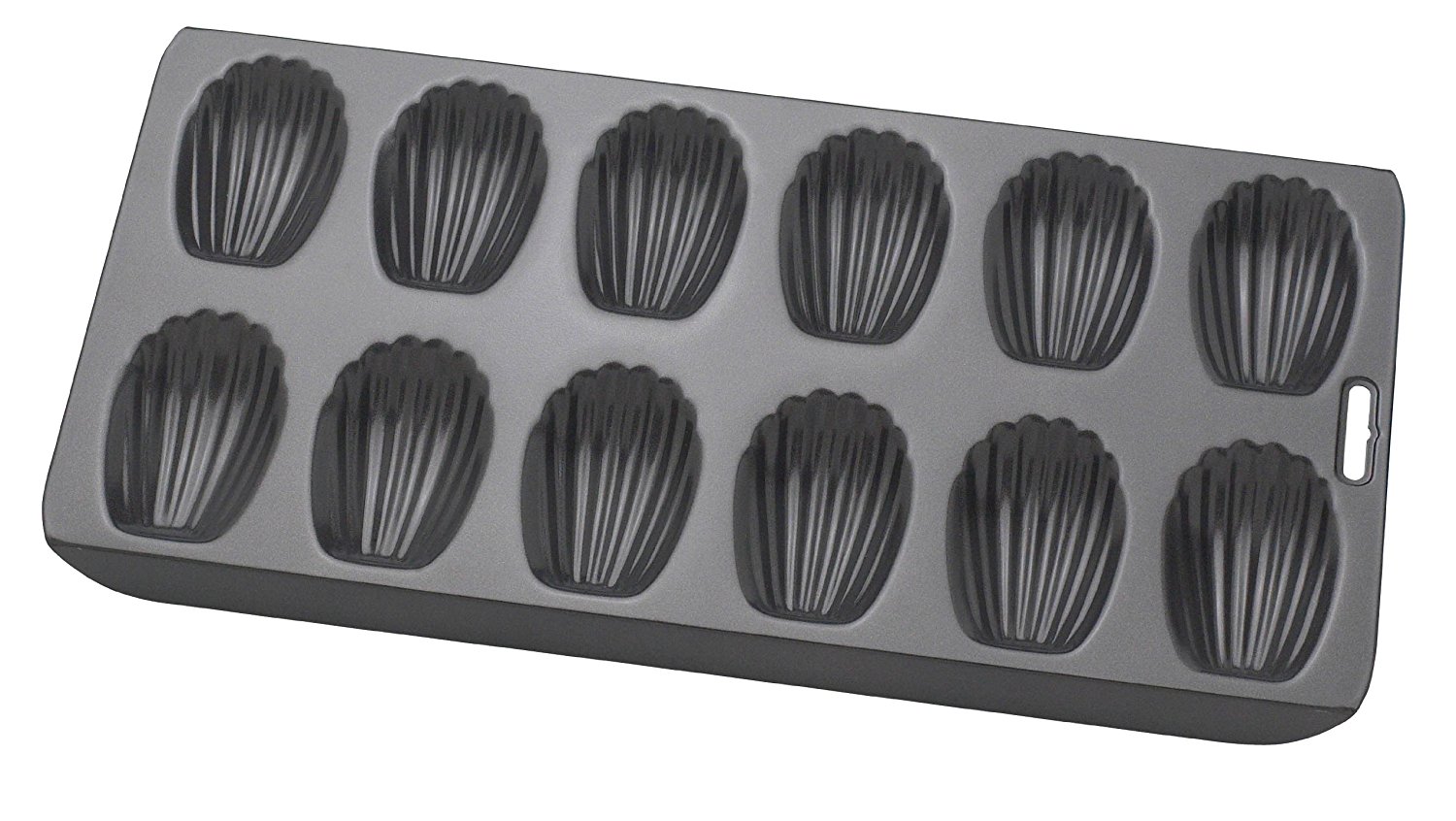 And you’ll want to have a piping bag. You’ll think you won’t but you try doing this with spoons and you’ll wind up swearing a lot about how next time you’ll use a piping bag.

Also, preheat the oven. Temperature is a massive thing for this recipe, as is piping in the right amount of batter. 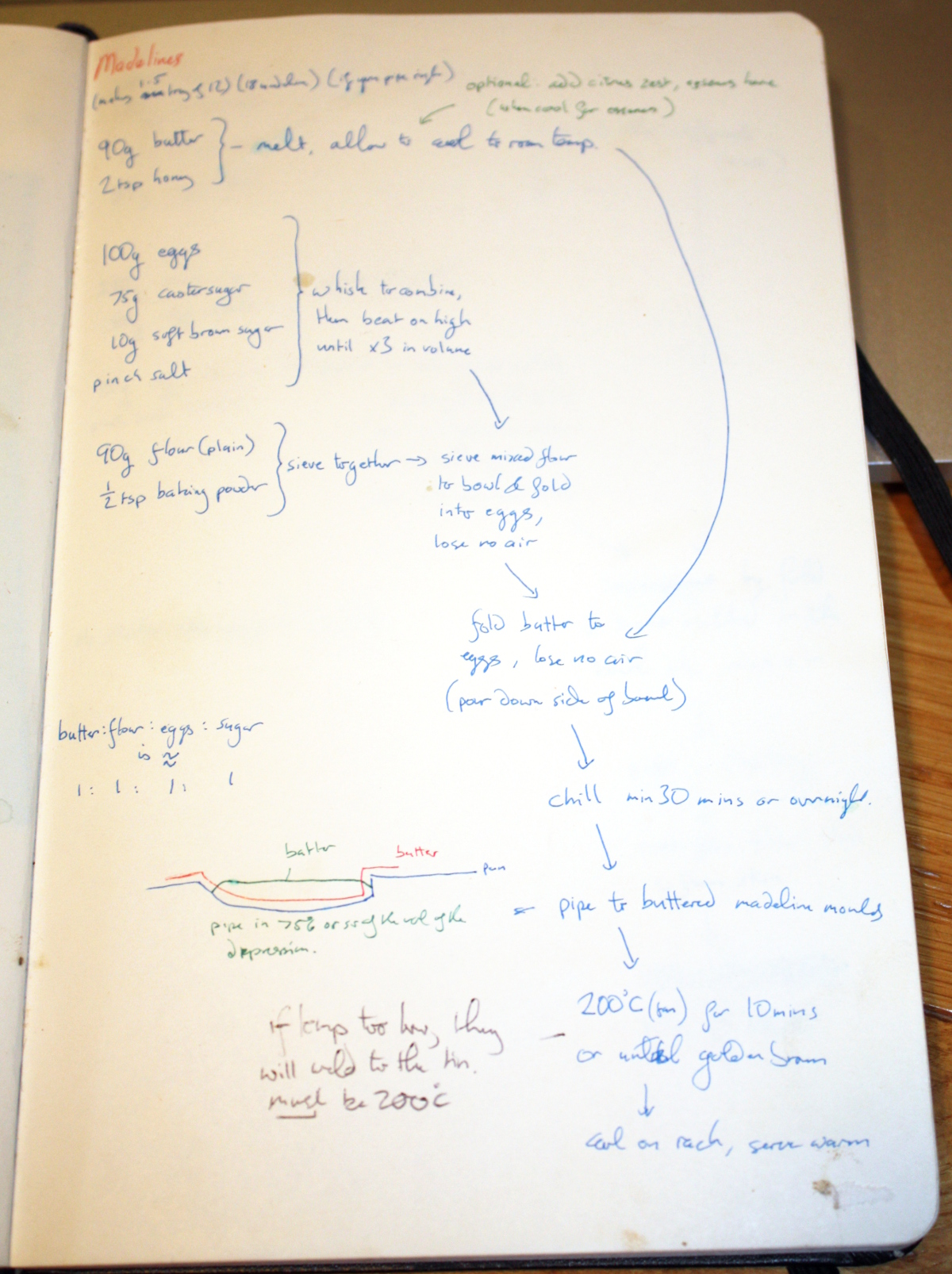 The easiest way to start is in the stand mixer bowl (you don’t need a stand mixer. You also don’t need a car to get to work, the bike or bus or train would do fine, but you’re a fancy sod, aren’t you?) and try to get 100g of eggs in (just keep cracking eggs till you’re at or past 100g, then scale all the rest of the recipe to match – the rest of the amounts here will assume you got to 110g, beat the eggs to a homogenous mix, then ditched 10g of the egg mixture because you’re phobic about maths).

Now, 90g of butter and 2 teaspoons of honey into a small pot, melt gently on the hob and let it come back to room temperature. Once they’ve melted and are cooling, you can add citrus zest or vanilla essence or whatever you feel like. Personally I like lemon zest and vanilla here and adding a handful of poppy seeds to the flour later but if you want to make mint salted caramel madelines, well, not in my f*&$ing kitchen you’re not.

Now, back in the stand mixer bowl add 75g of castor sugar, 10g of soft brown sugar and a pinch of salt. Mix with the whisk attachment by hand just to get the sugar off the bottom and into solution, then put the attachment back into the machine and whisk on high until the mixture triples in volume. Don’t cut this step short, this is all the air that’s going into this and you don’t want to eat window putty, you want a light sponge which means lots of air at this step.

Next, sieve 90g of plain or self-raising flour into a bowl. There’s not enough difference in the two flours to really worry about at this stage. Michelle Roux Jr. might worry, but unless you’re a professional pastry chef who’s famous for his desserts and underpaying his staff, the difference isn’t going to be very important to you. You’ll screw something else up sufficiently to hide the difference anyway.

Now, sieve the mixed flour into the stand mixer bowl, folding it in carefully with a spatula (yes, turn off the mixer and take the bowl out first, or it’s going to be very funny for everyone else). Lose as little of the air in the batter as you can. Once you’ve finished all the flour, do the same with the butter that’s by now cooled to room temperature (if it hasn’t cooled and you try this, you’ll scramble the eggs, which will suck and won’t make madelines). Pour the butter down the side of the bowl rather than dumping it directly into the batter, or the whole thing collapses and sinks like a souffle in a cement mixer.

Fill the piping bag, then put it in the fridge and forget about it till tomorrow.

Yes, the next day. Feck’s sakes, you didn’t start reading this ten minutes before you needed them did you? Anyway. Next day. Preheat the oven to 210C.

Take a tablespoon or two of butter and put it in a plastic bowl and microwave it till it’s almost melted (or, if you don’t have kids you can use a small pot on the hob or microwave it in tupperware or whatever). Now brush it on the depressions in the pans. You don’t want a thin translucent smear here; you want a thickish coat because that butter is going to fry the batter for that crust. I mean, not a tablespoon per madeline, but a good schmear.

Now, pipe in batter to each depression. You want to fill each depression by about 75% – I usually find that piping at a good rate from one end to the other and back again is about right, but give it a go yourself and you’ll figure it out. Or, you know, just give up, curse the whole thing and buy them from a bakery in future.

Then put the pan into the 210C oven (no, put it back on the counter and feckin’ wait for the oven to heat up, for feck’s sakes…) and immediately drop the temperature to 200C and bake for 10 minutes or until golden brown. The batter will rise in the oven in a small peak in the middle of each madeline, called the nipple because it’s a french dessert and of fecking course it is…

Knock them out of the pan immediately (and then use a butter knife to prise out the last two that always stick) and then cool them on a rack for a few minutes until you can hold them without burning your hand, and serve while still warm. 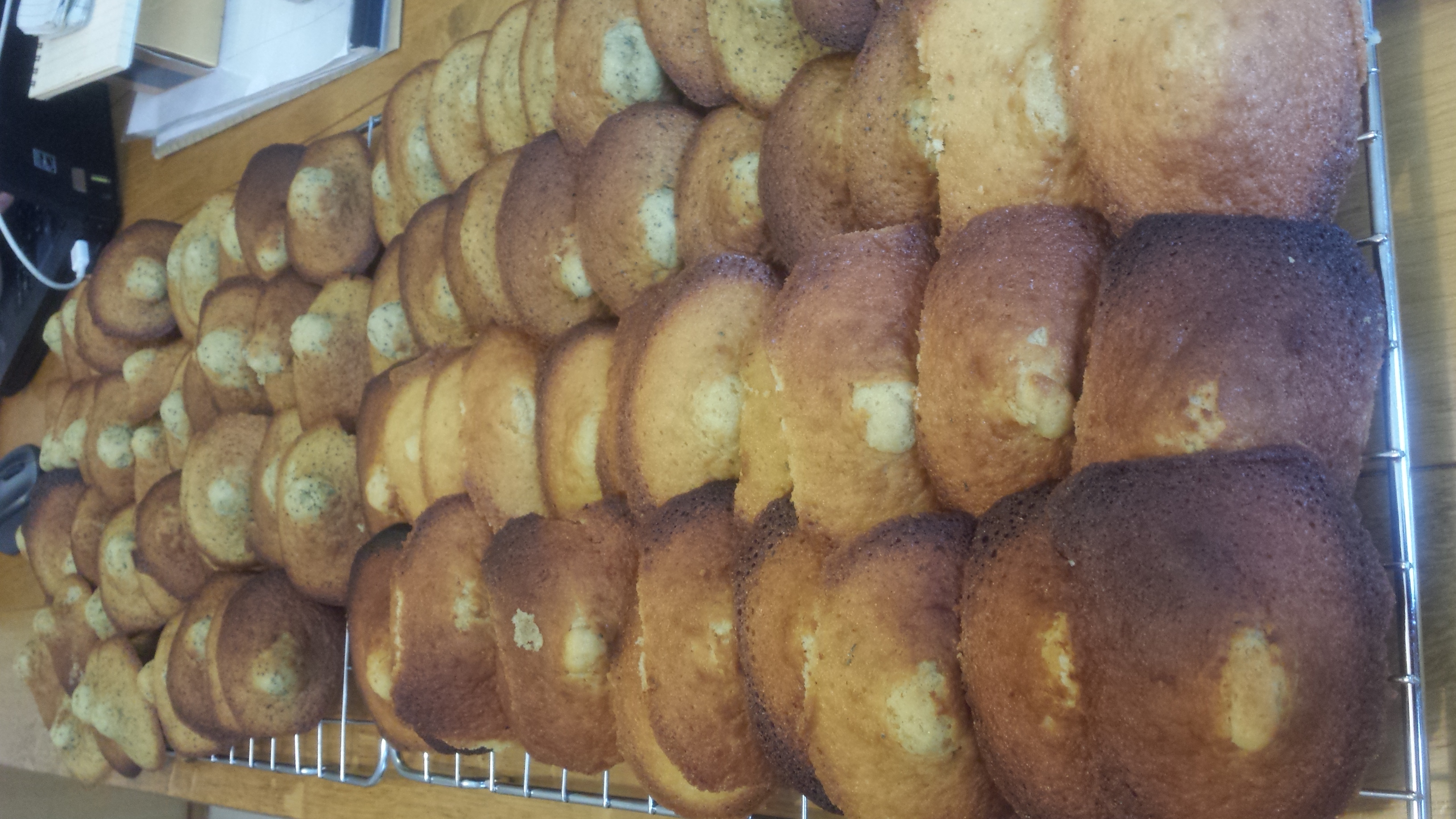 Oh, and if you can’t serve them warm, leave them cool completely and then dip them in chocolate. I mean, they won’t be as good as fresh, but they’ll be dipped in chocolate and well, what isn’t better for being covered in chocolate?