A day in the shed 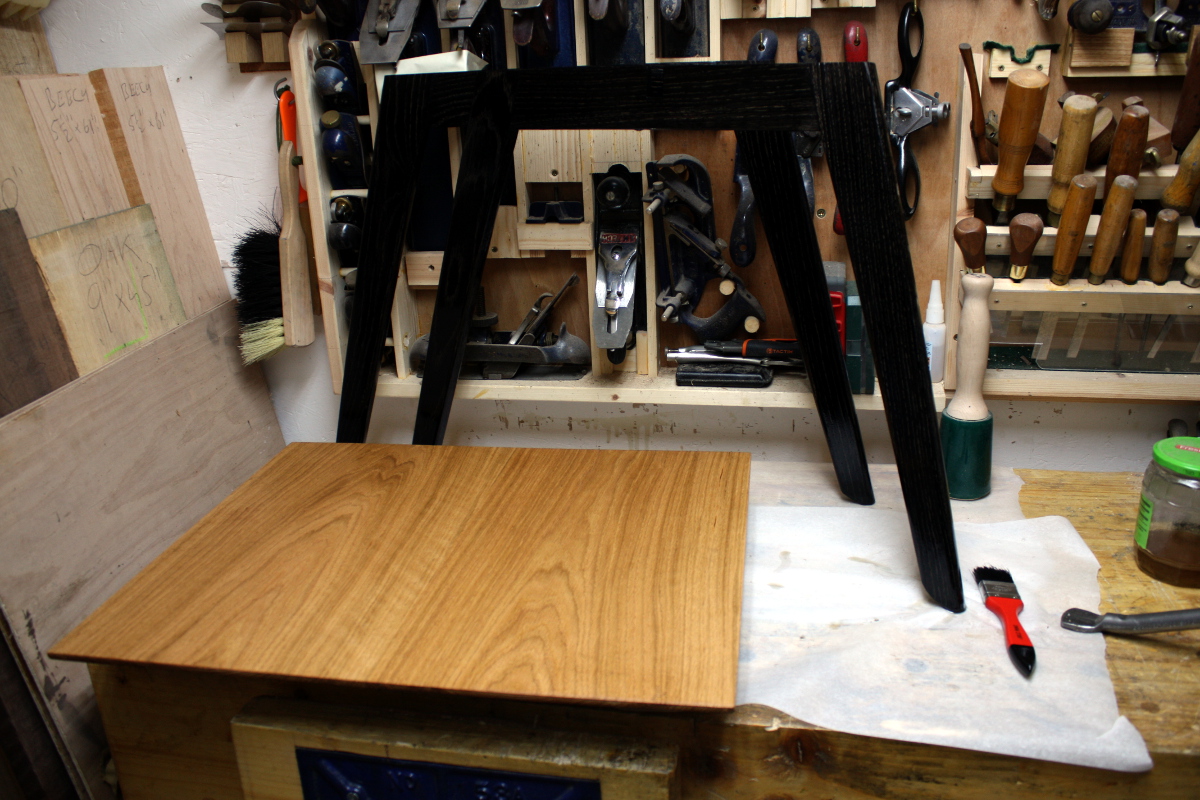 So because I spent 2300 to 0400 on Friday night and 0900 to 1830 on Saturday working, I get a TOIL (Time Off In Lieu) day. Which I took today for reasons like waiting on The Plumber Who Never Showed Up. The plan was to spend all day in the shed. But since it hit -3C overnight, first things first. 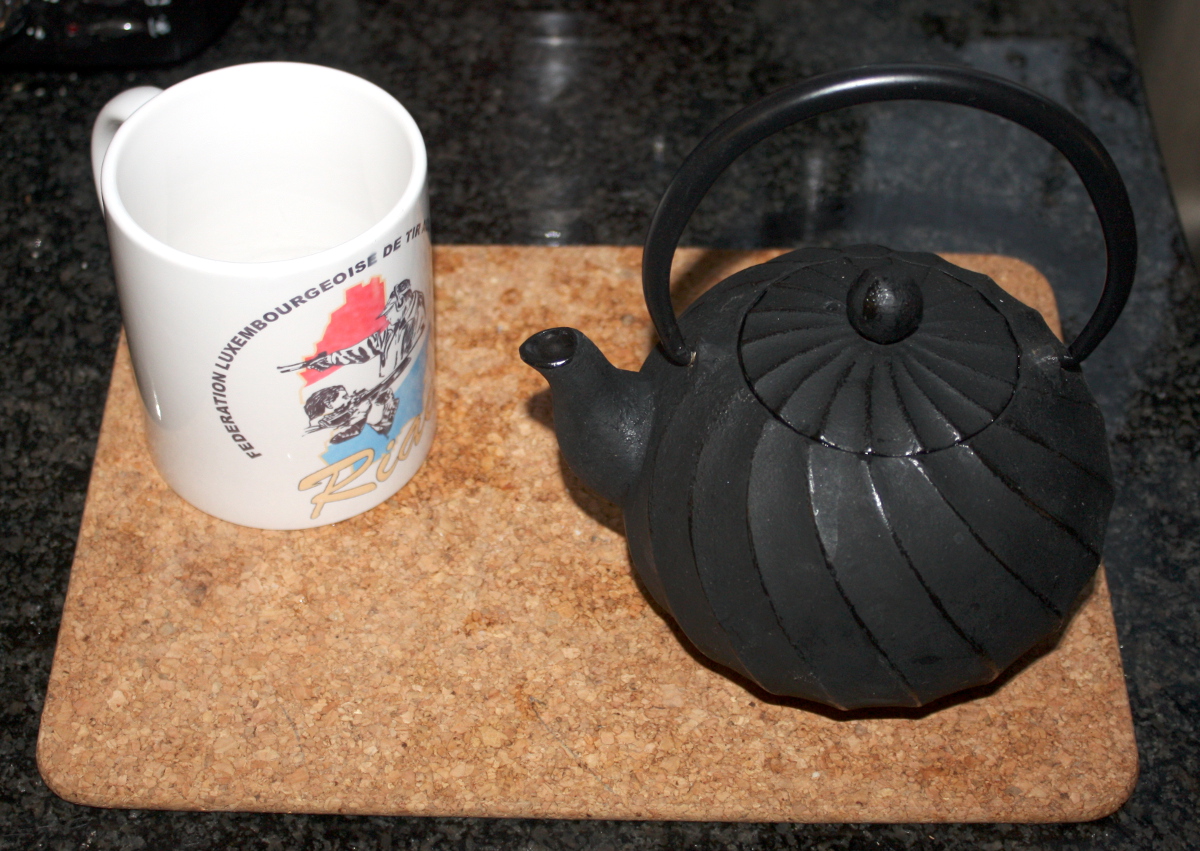 So with the shed at a balmy 3.5C, time to get to work, First, put the last coat of osmo on the tabletop and now I have to make some room and get the tabletop off the bench so I can get to it. 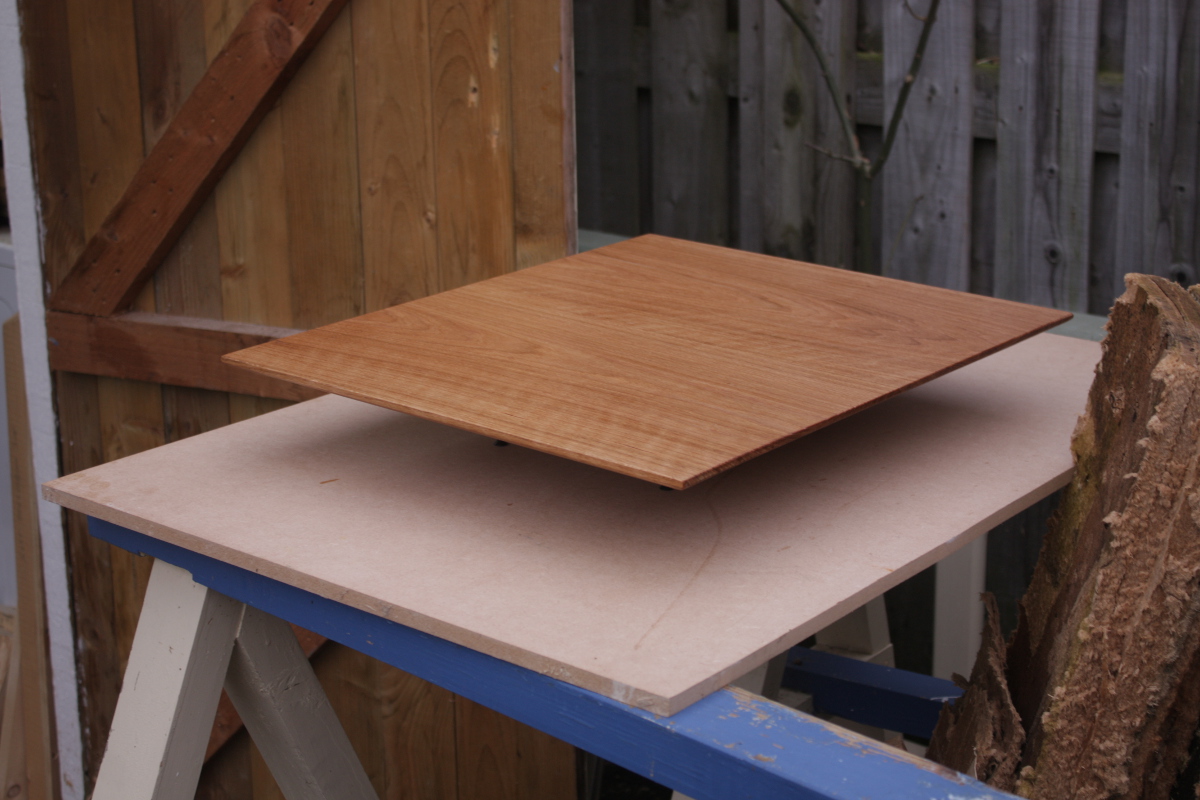 It’s not ideal, but needs must. And yes, I do need to clear away that rubbish in the wood bin, but this isn’t the countryside and neighbours wouldn’t take well to a small bonfire. Or for that matter, any fire involving wet MDF. I can’t blame them for that, I’d be miffed at needing a respirator in my own back yard as well. But I digress. 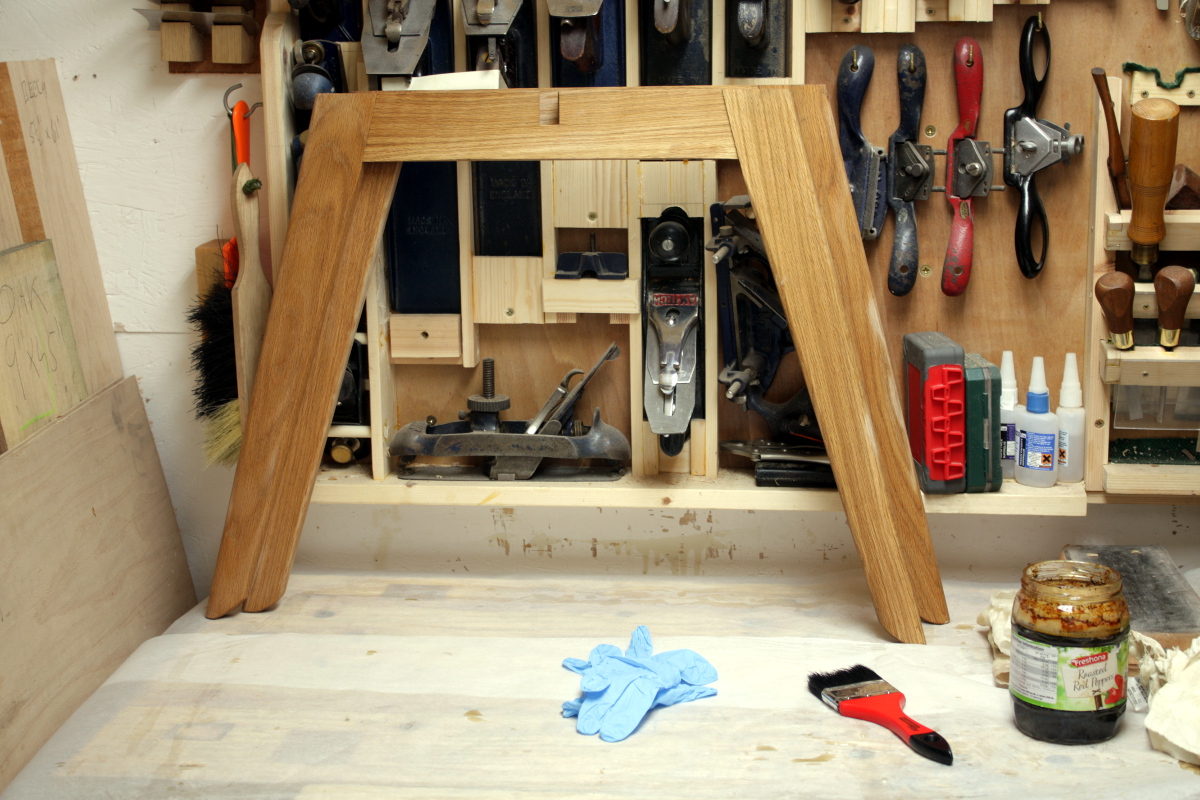 So the legs have been sanded down, given a last coat of the oak tea, let dry for five minutes so that right now the surface is damp to the touch but not actually wet. Time to apply the vinegar&iron solution… 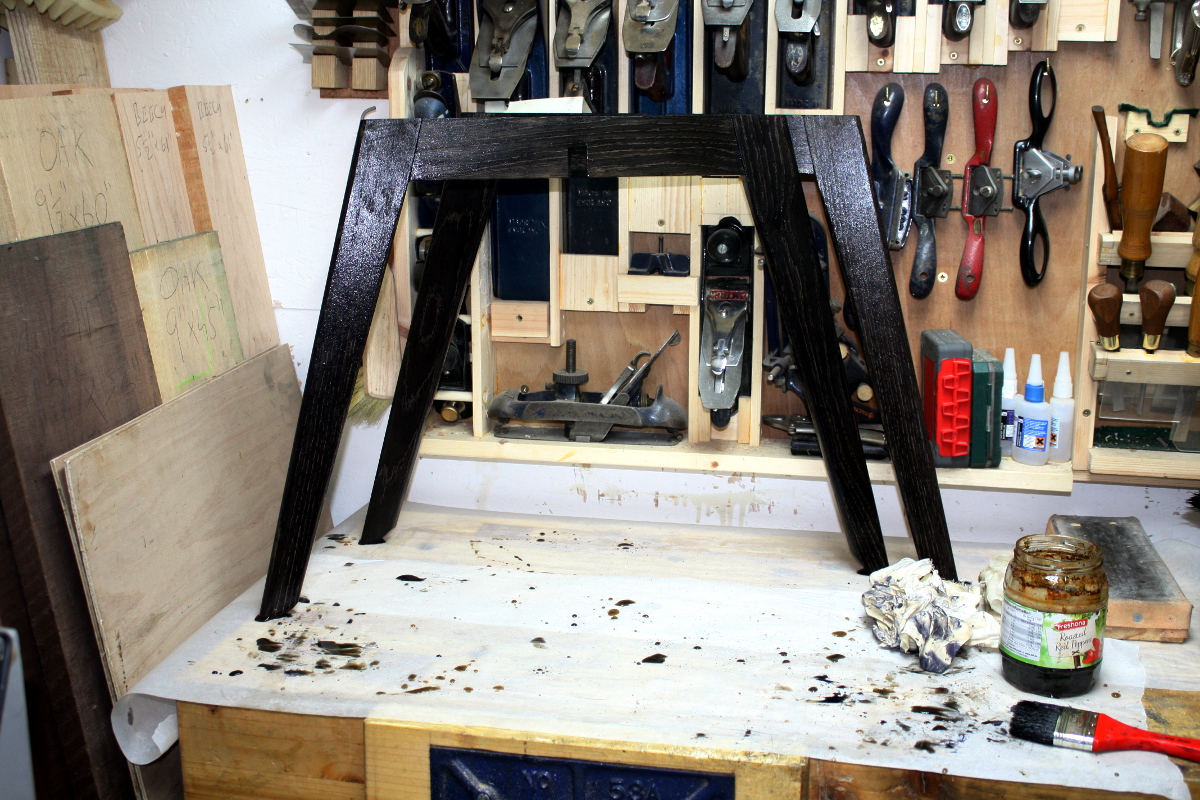 That never gets old. It’s so dark it’s messing a bit with the camera’s auto-white-balance thingy, but it does that to the Mk1 eyeball too. 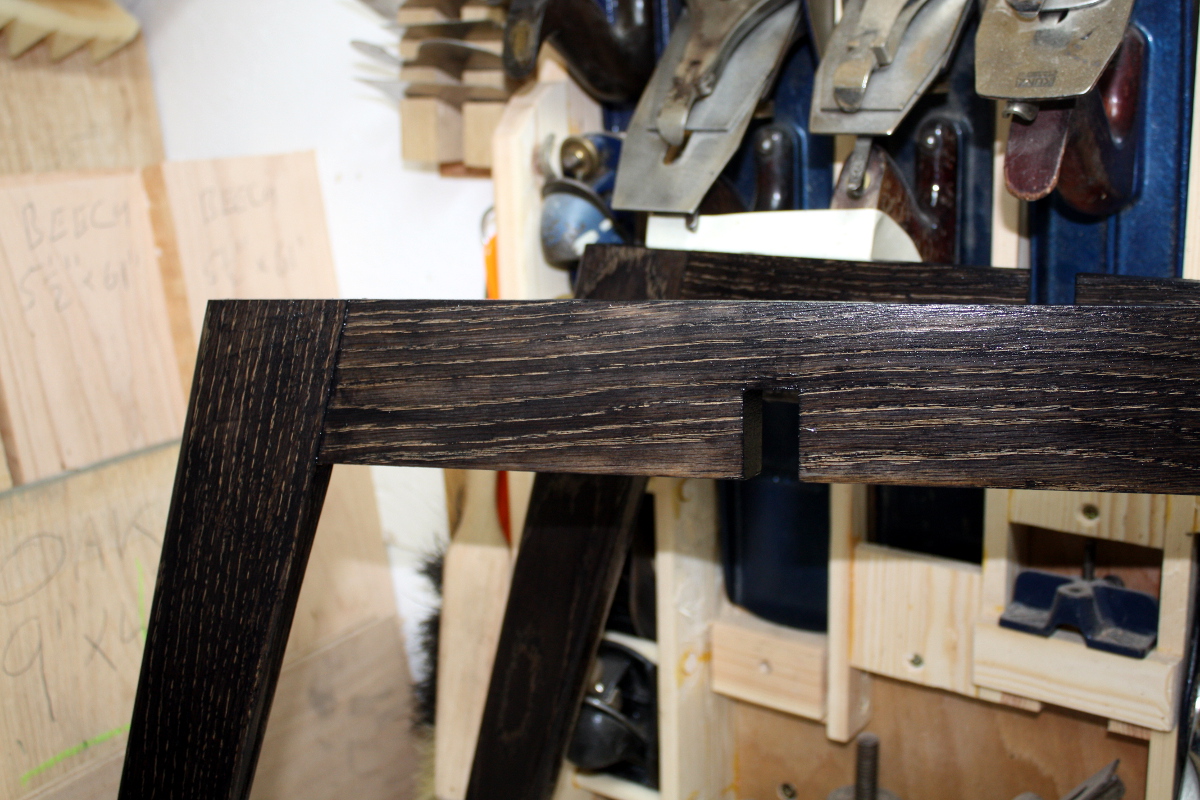 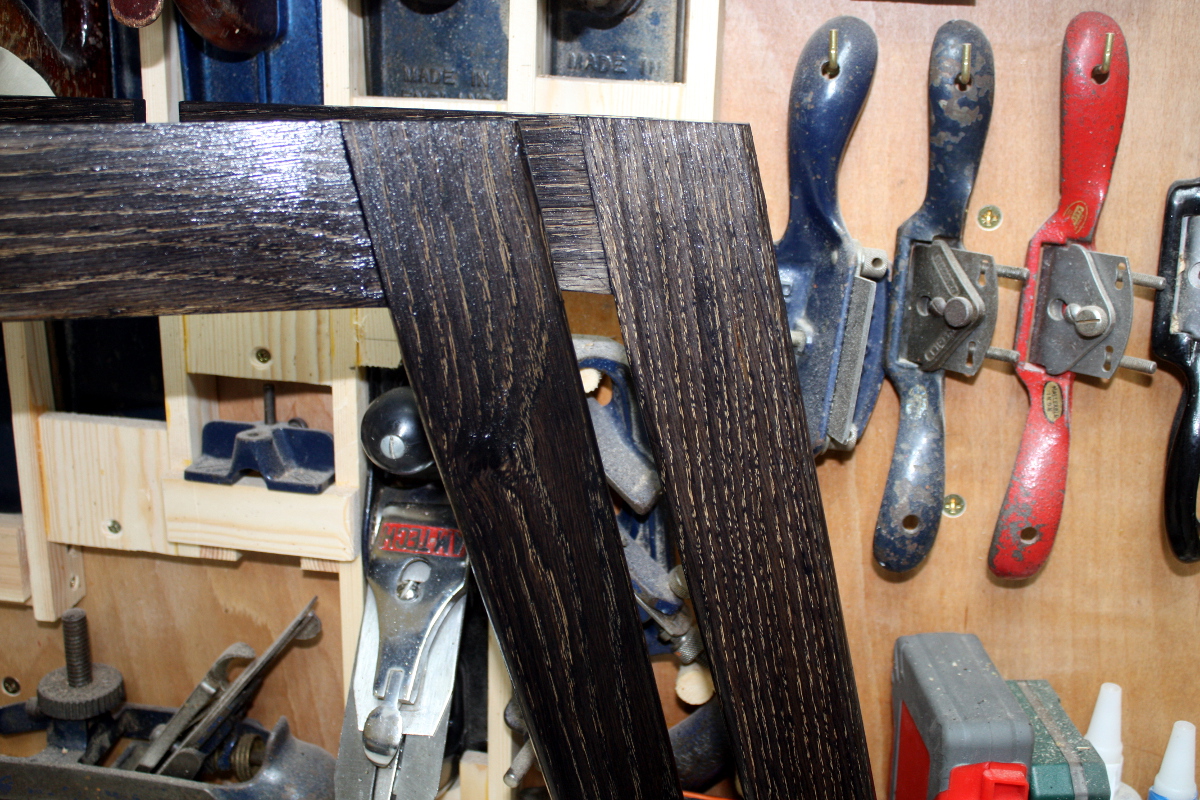 It’s a little… grubby looking close up. No worries. This is just the first stage, and I’m a bit oddball in that I like that pin-stripe-trousers thing the grain’s doing there. Dunno why, it just looks nice to me. However; now we give it about ten minutes to keep reacting (those were taken about 4-5 minutes in). 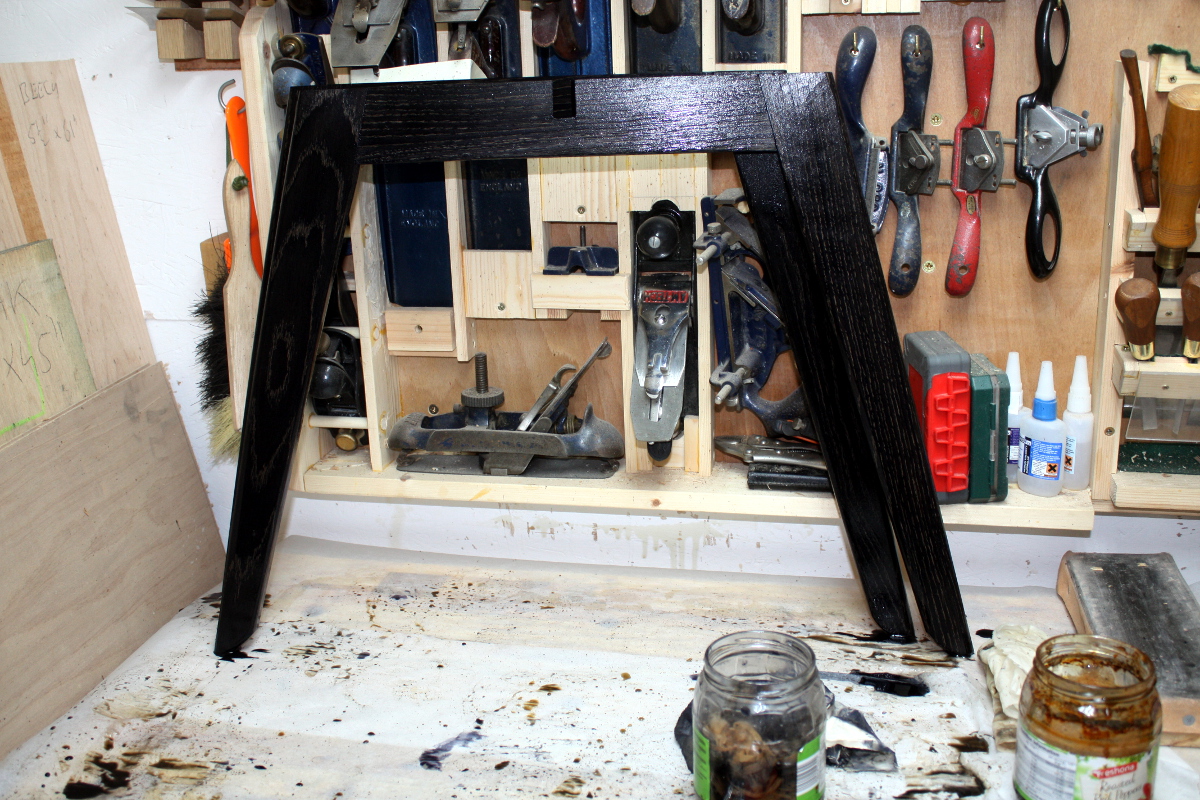 And after that time, we paint it in more oak tea, let it dry for five minutes, then more vinegar and iron solution, dry for five minutes, and then a last coat of the oak tea. At this point, it’s about as dark as it’s going to get in the time I have available (it will continue to react for the next 10-12 hours anyway and get darker as it does). 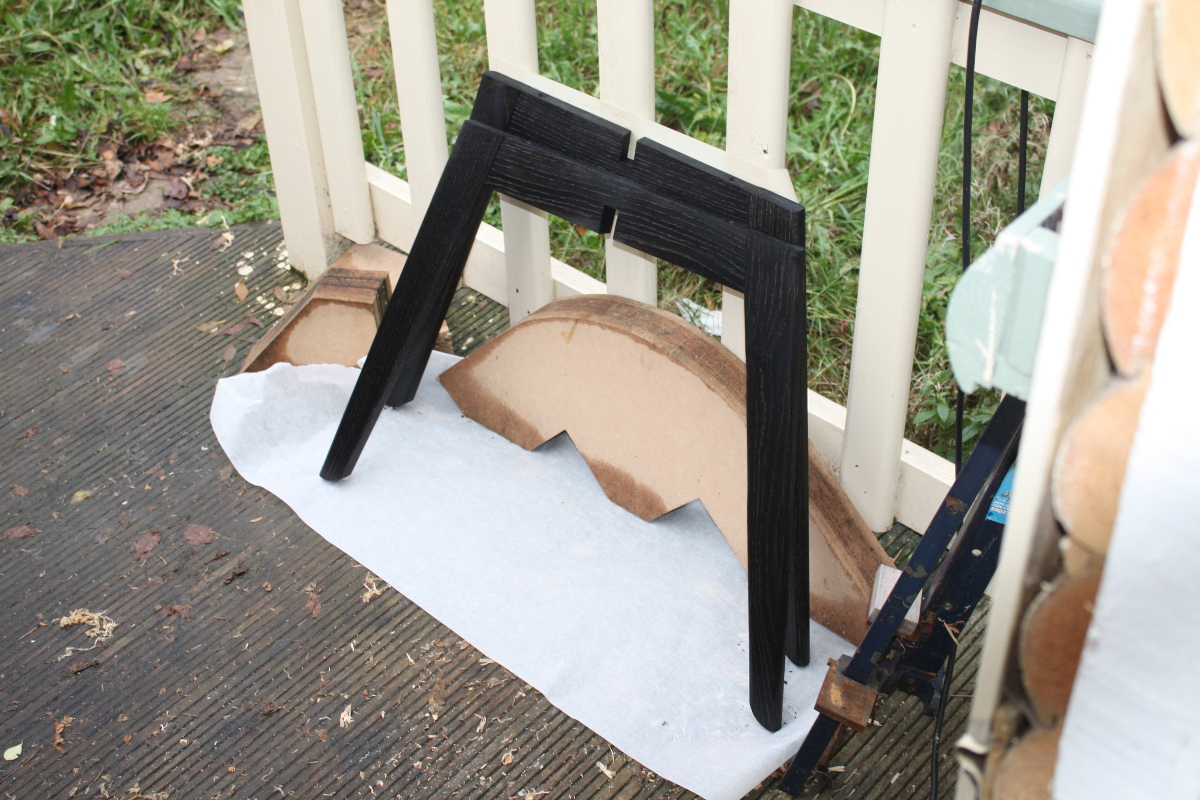 Wake up, time to dry.

They’ll go a kind of dusty purple in the next hour or three; that’s expected.

And now I have some time and a shed with a free bench…. 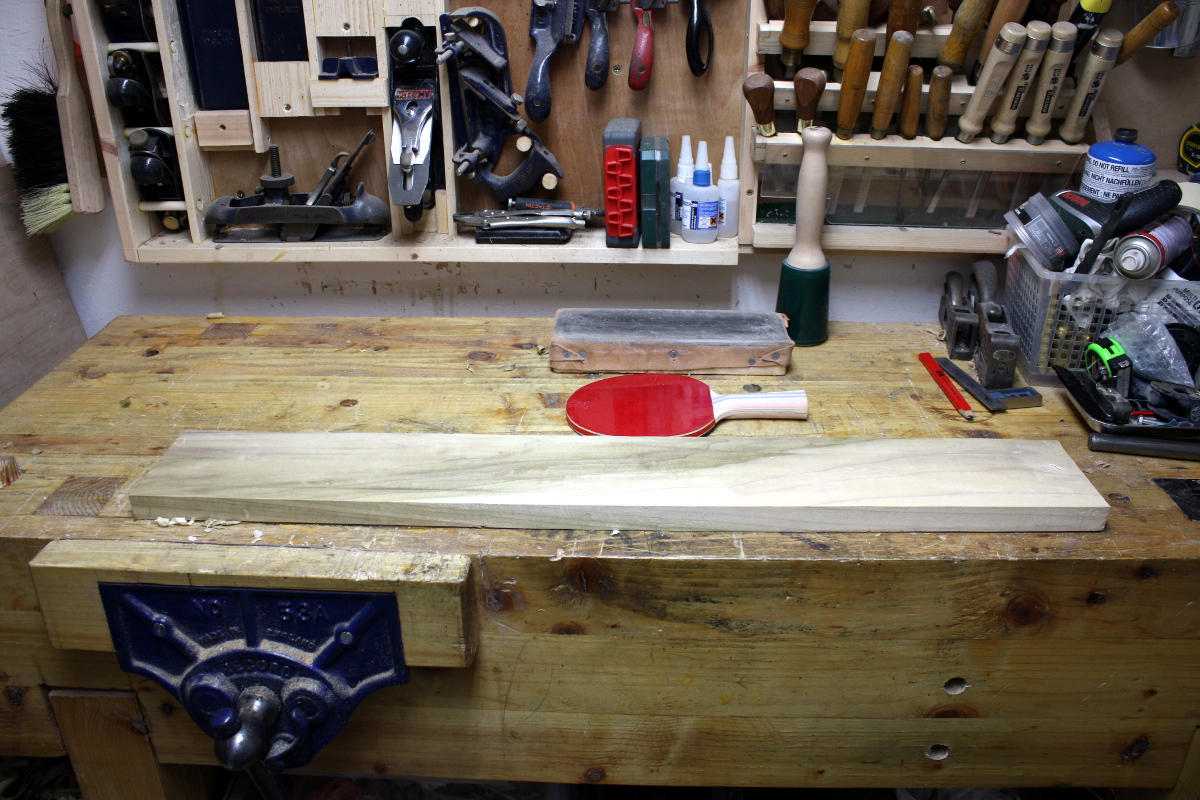 I have an idea here. Trust me. 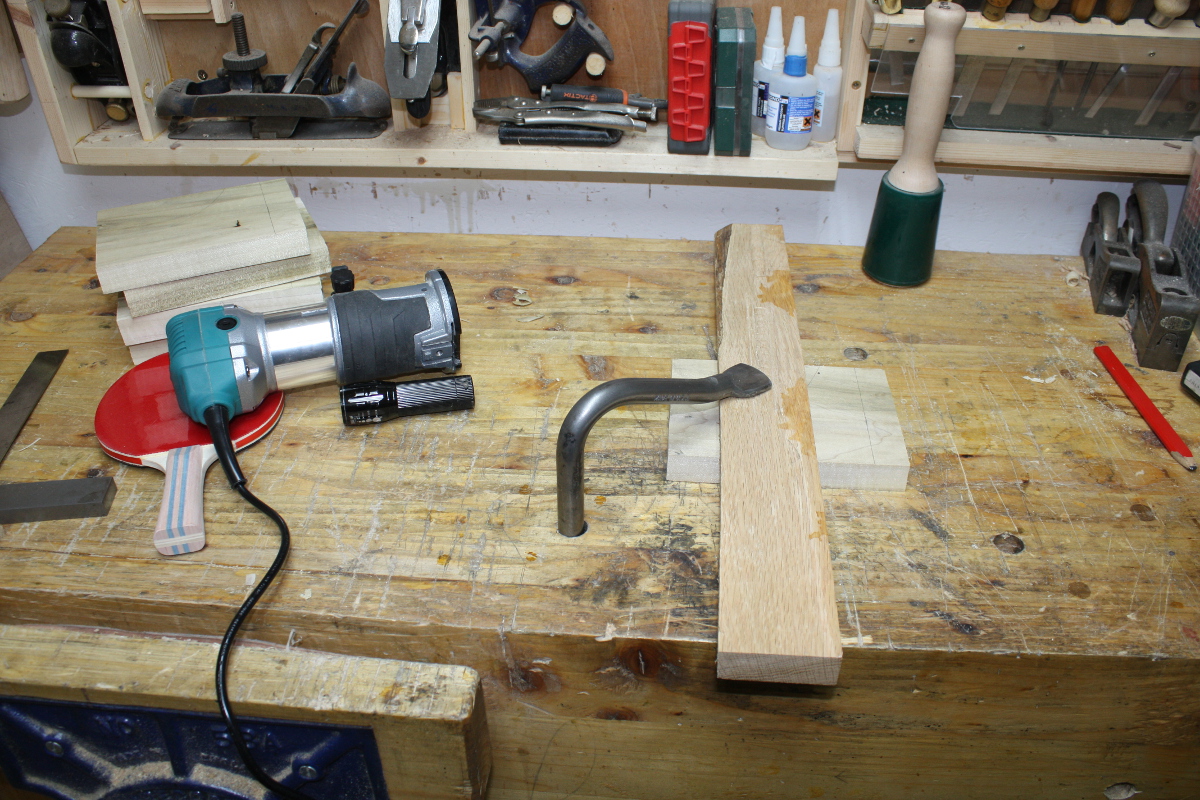 …or maybe not. I gave up on this idea here; I’ll come back to it over the holidays, but I can’t get it done today and I’ll just mess up the other things I’m working on. I guess recognising this kind of thing and giving up early is a good skill, but it still irks me.

Anyway, I do have something else on my to-do list for today: 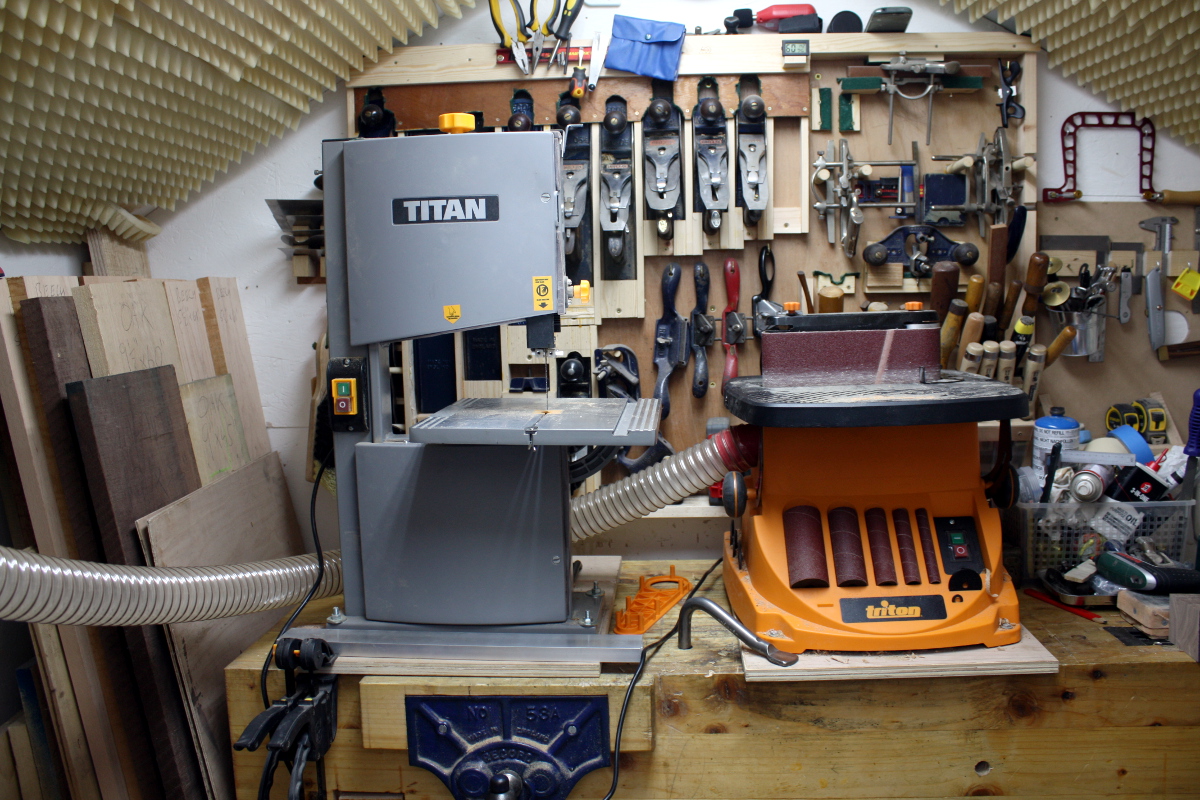 Ug. Machines. And they’re ganging up on me now. Yes, it’s bandsaw box time. First though, I have a plan for that bandsaw… 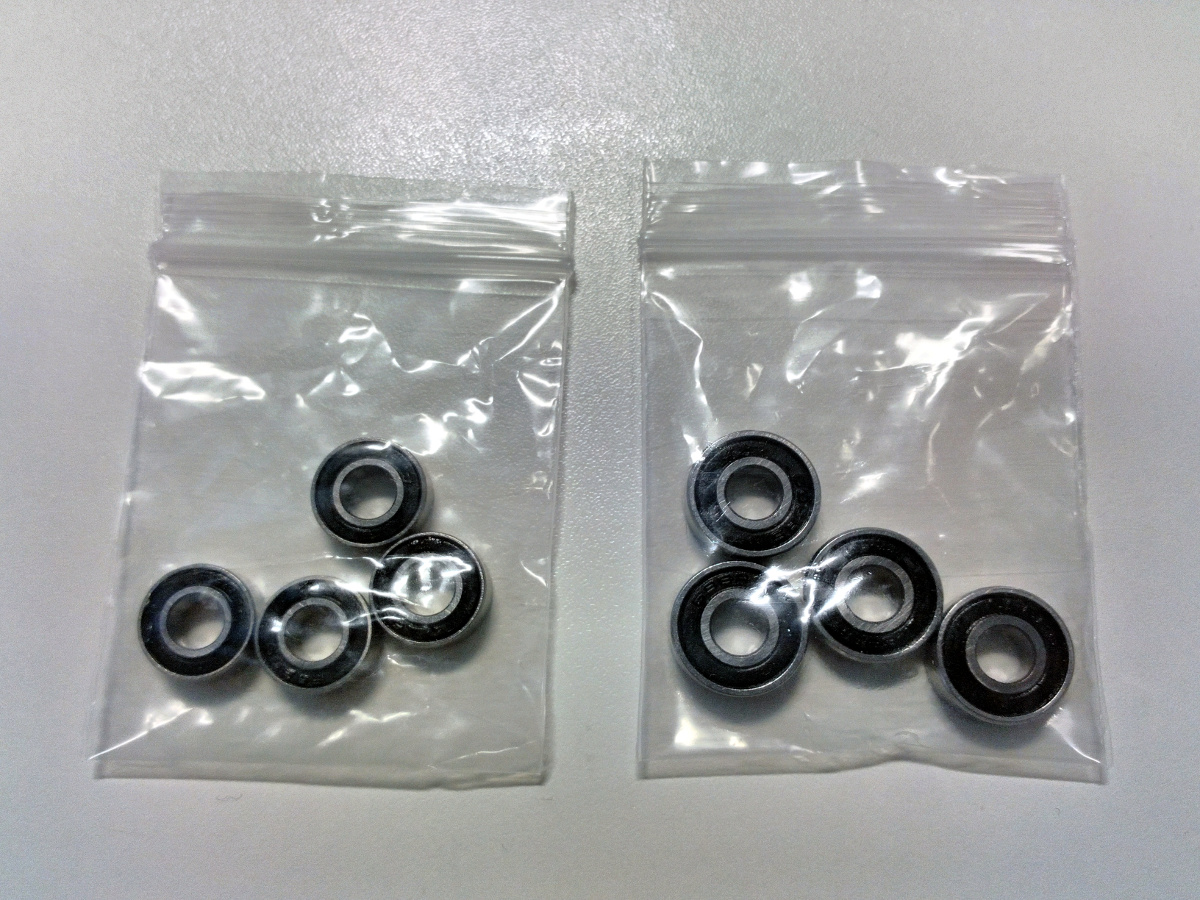 Remember these? Going to fit the smaller ones. 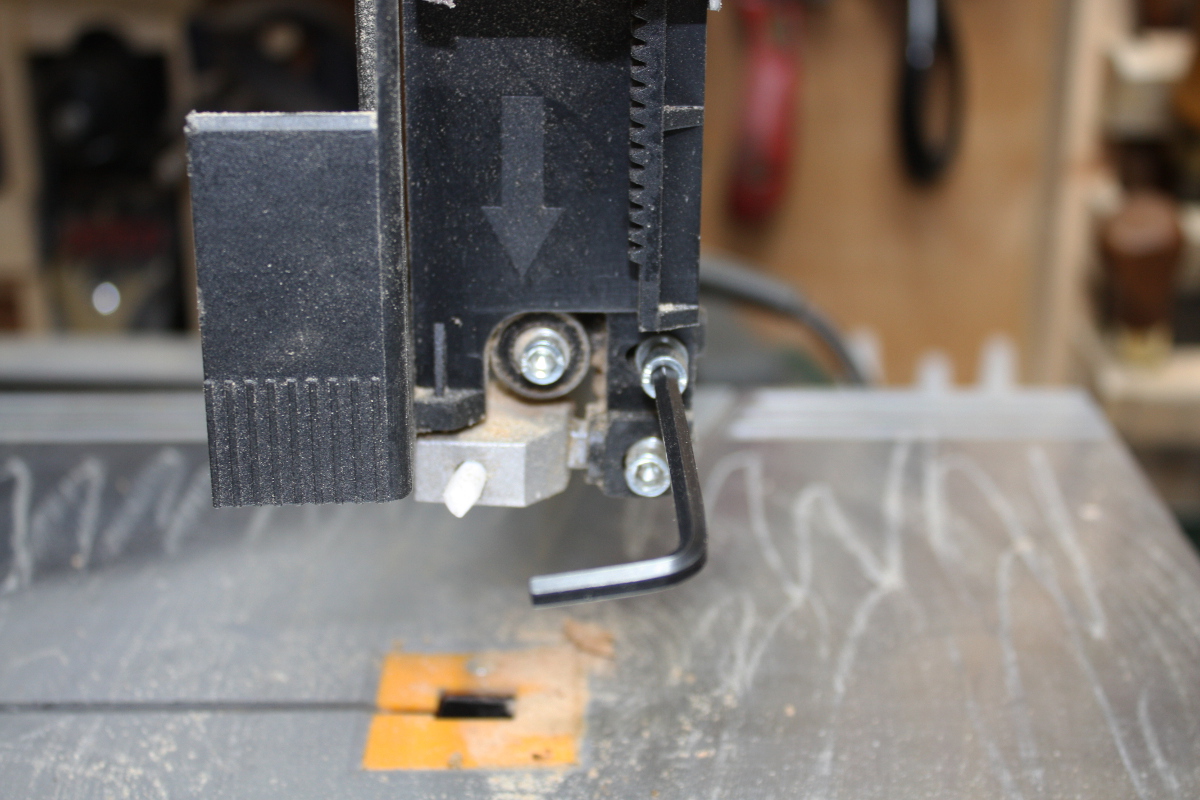 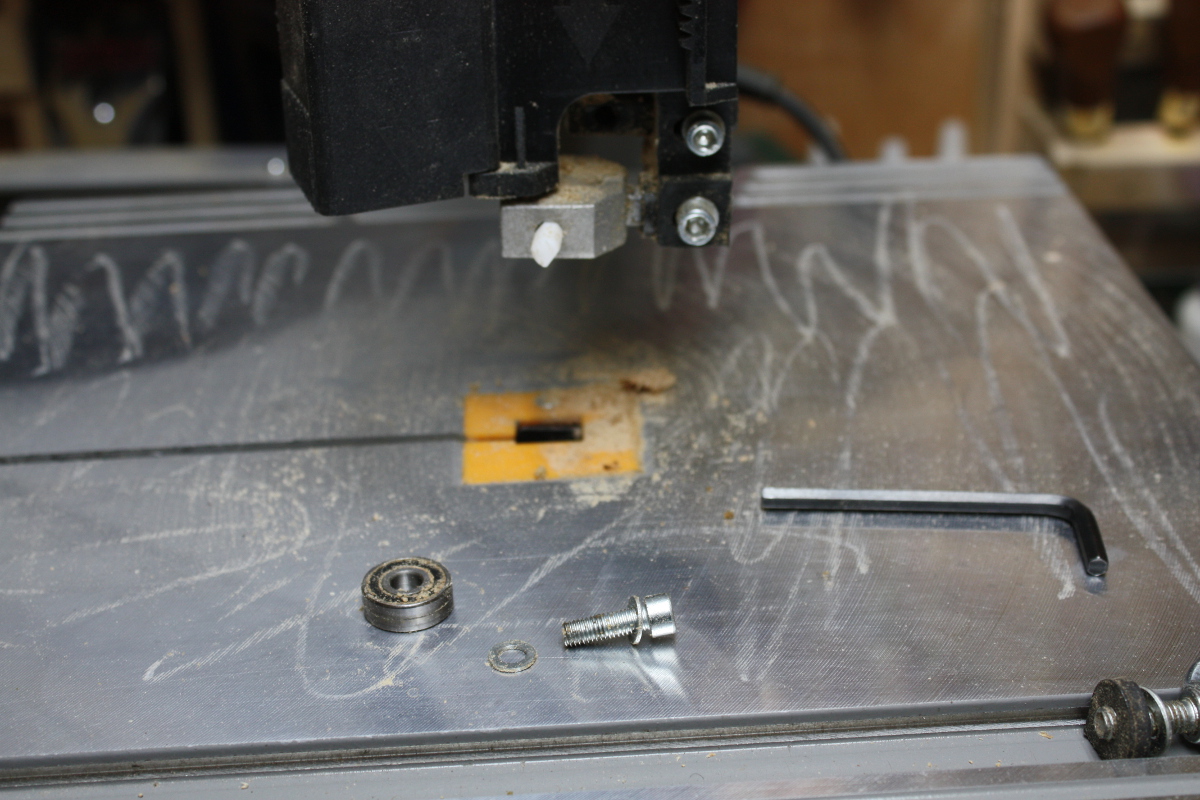 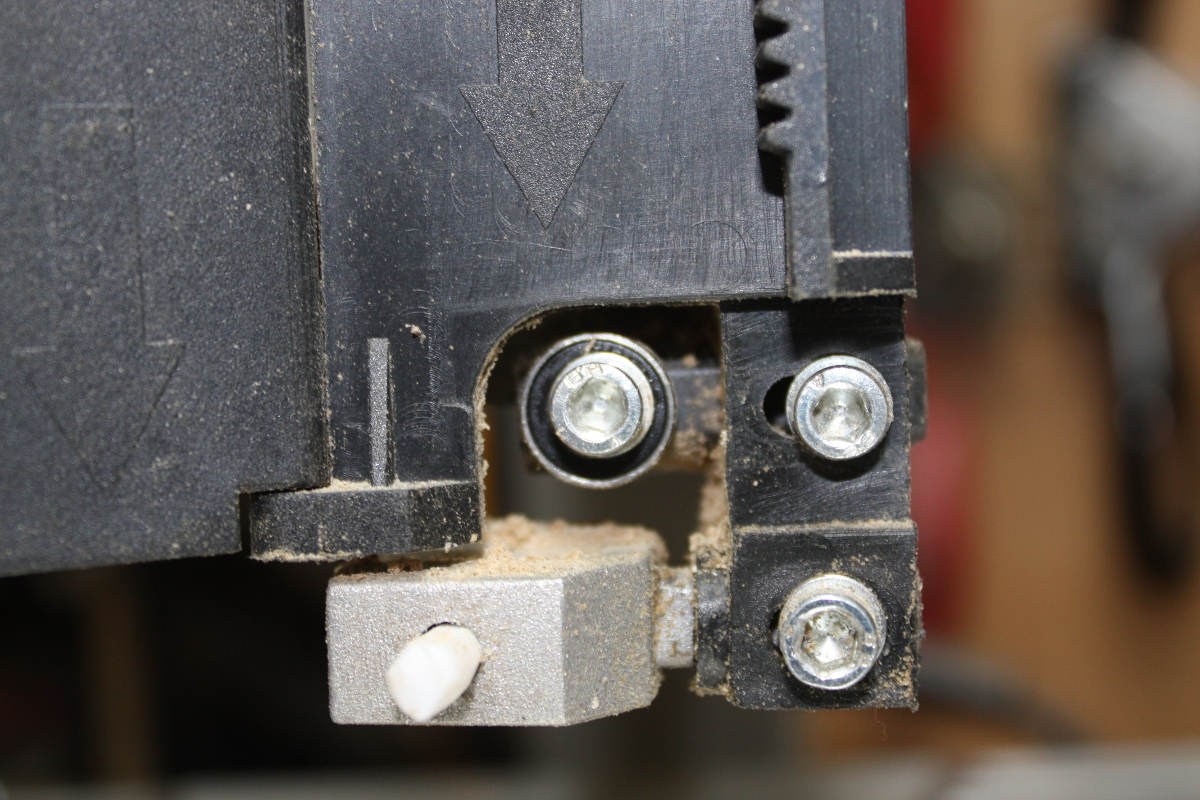 The washer makes it look off-center, but it’s fine. The whole lego-part thing is great with these. Now for the lower thrust bearing, which is more awkward because of course it is. It’s not like being underneath the table would make it awkward enough, you also have to remove the entire assembly to replace the bearing. 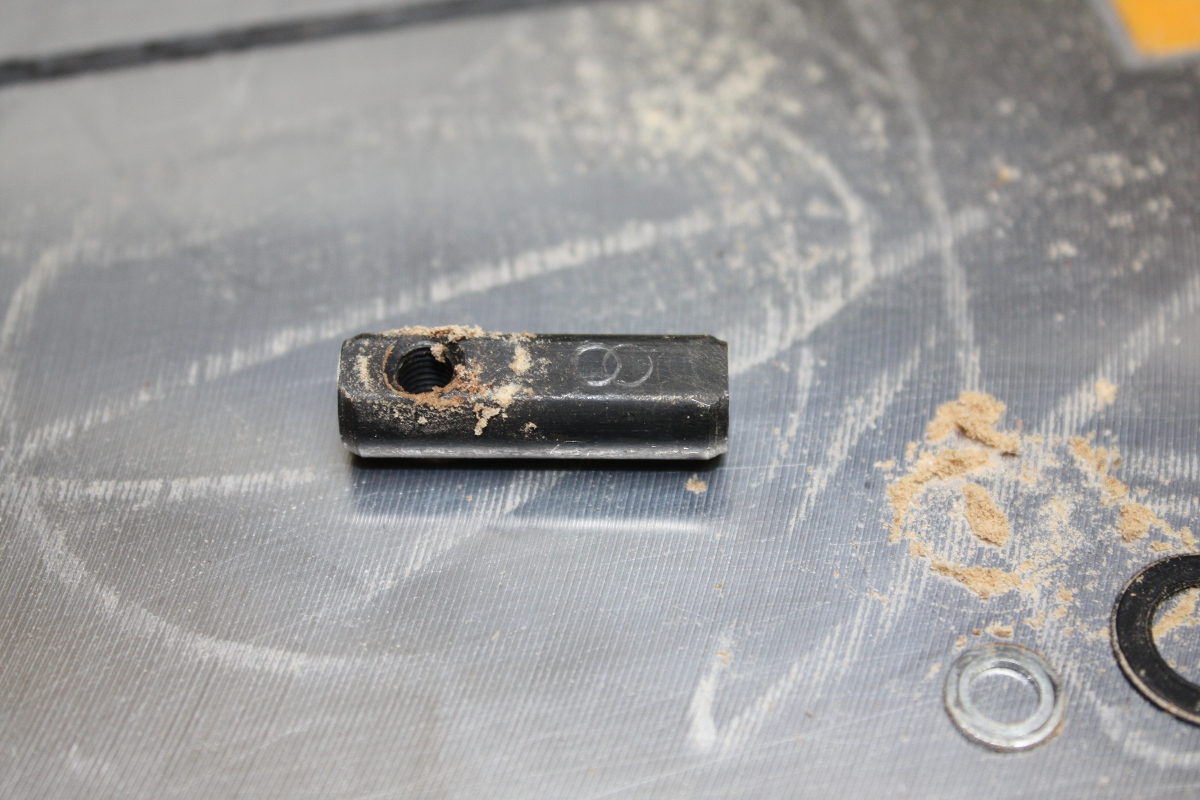 Why is the lower post adjustable when you can’t reach it but the upper one isn’t? Le sigh. 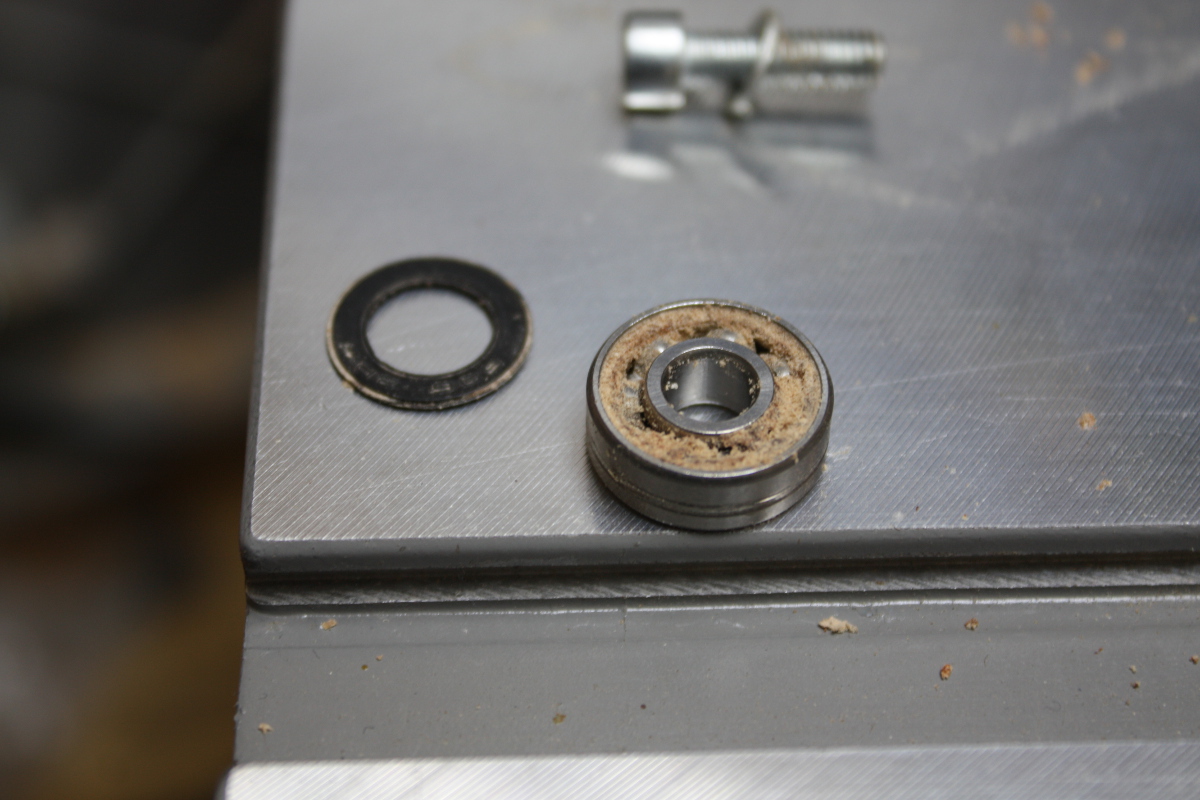 Well. That explains a few noises. So much for sealed bearings. 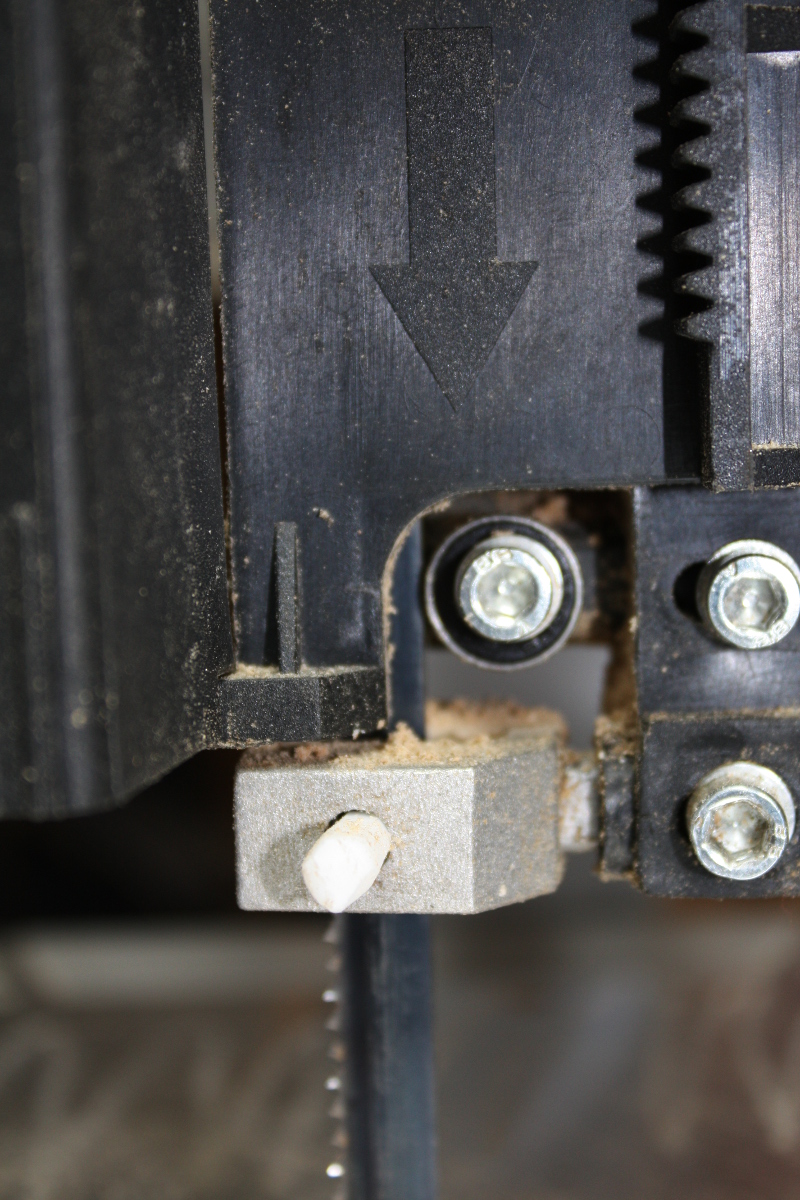 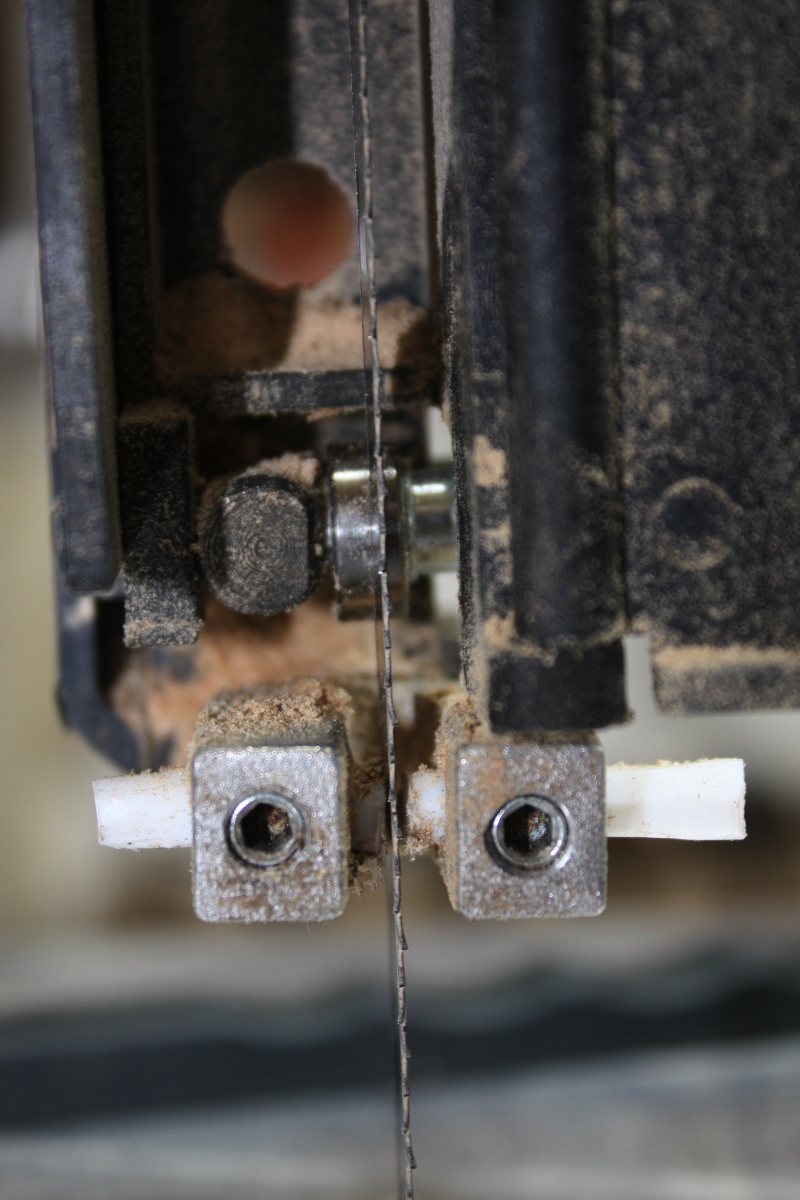 And done. Modified thrust bearings, replacement teflon blade guides. And why go to all this effort? Three-eighths inch blades. Stronger than the normal quarter-inch blade, so you get better straight cuts on long rips (the main reason for having this bandsaw in the first place). But you can’t install them on this bandsaw properly with the normal thrust bearing – the normal bearing shoves the blade forward if you put the teeth gullets in the middle of the bandsaw wheel like you’re supposed to: 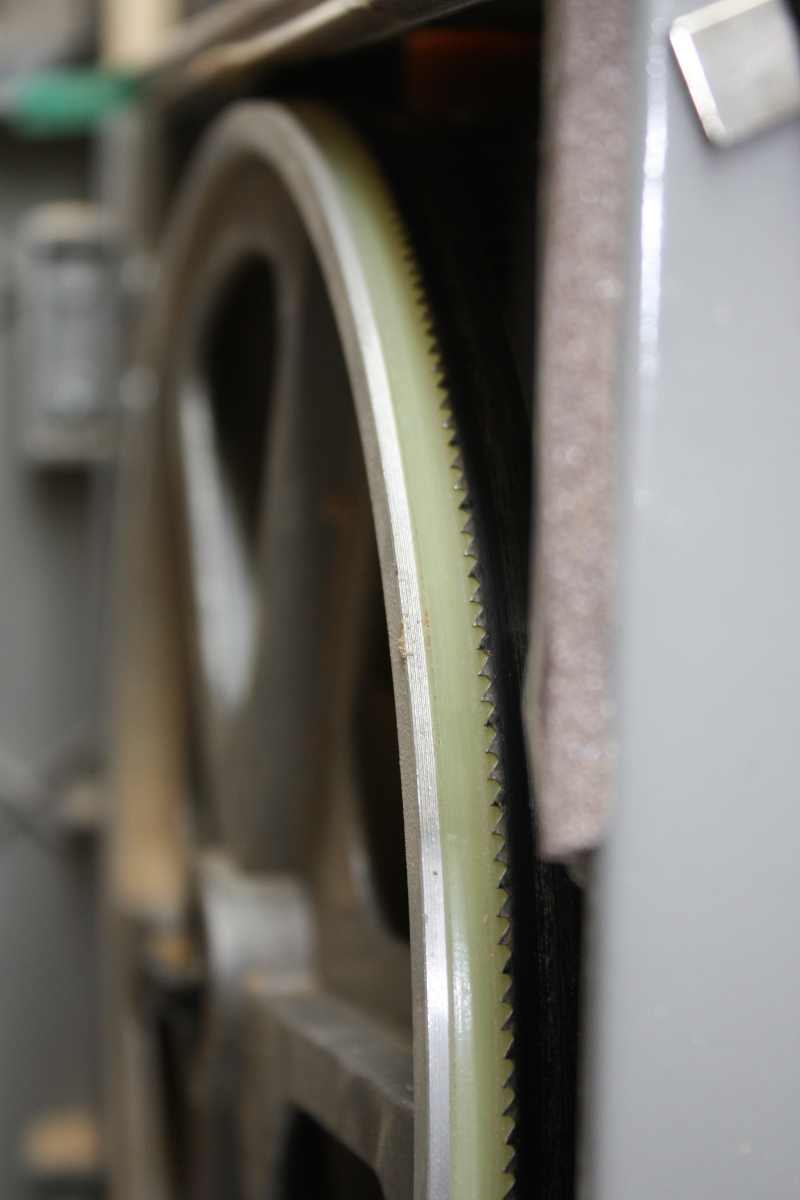 Put the leading edge of the bandsaw on the crown of the wheel like that and it has the most tension and thus is the most resistant to buckling when you shove wood into it; but you don’t want the thrust bearing rubbing on the back of the blade when you’re set up like this or the blade will behave oddly. With the new bearings, there’s just enough clearance (maybe 0.2mm but that’s sufficient).

And yes indeed, it does now cut much better than before with this blade, tracking straight down the pencil line instead of doing a drunken walk from one side of the line to the other and leaving you jockeying around the piece to try to minimise the amount of planing you’ll need to get it set afterwards. 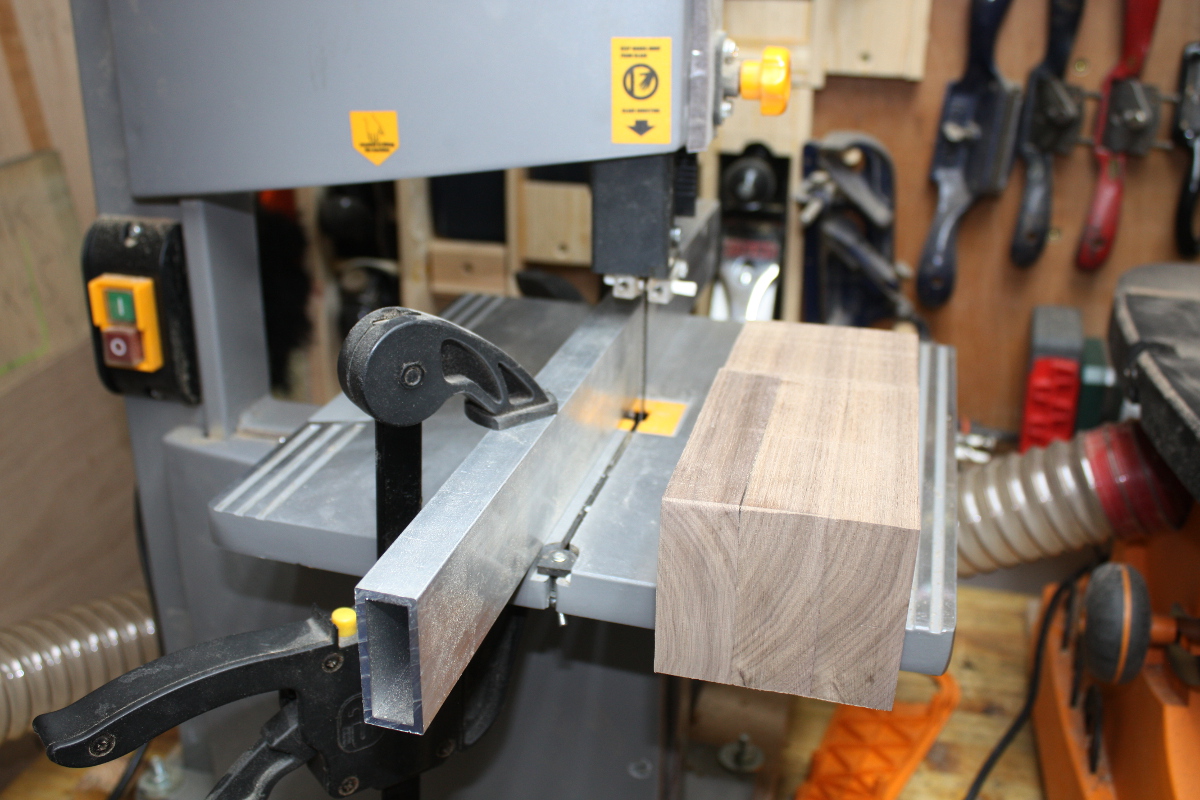 And so, on with installing my redneck fence and starting into the bandsaw box by cutting off the back.

BTW, sanding with the triton sander is waaaaay less scary than sanding with a belt sander under a holdfast on the bench, so +1 for that, but they are out and out liars of the most bare-arsed kind when it comes to noise level ratings. If I turn this thing on and shove my fingers into the spinning belt, sanding off all my fingernails, nobody outside the shed would know because they’d never hear me over the noise of the sander. Hrmph. 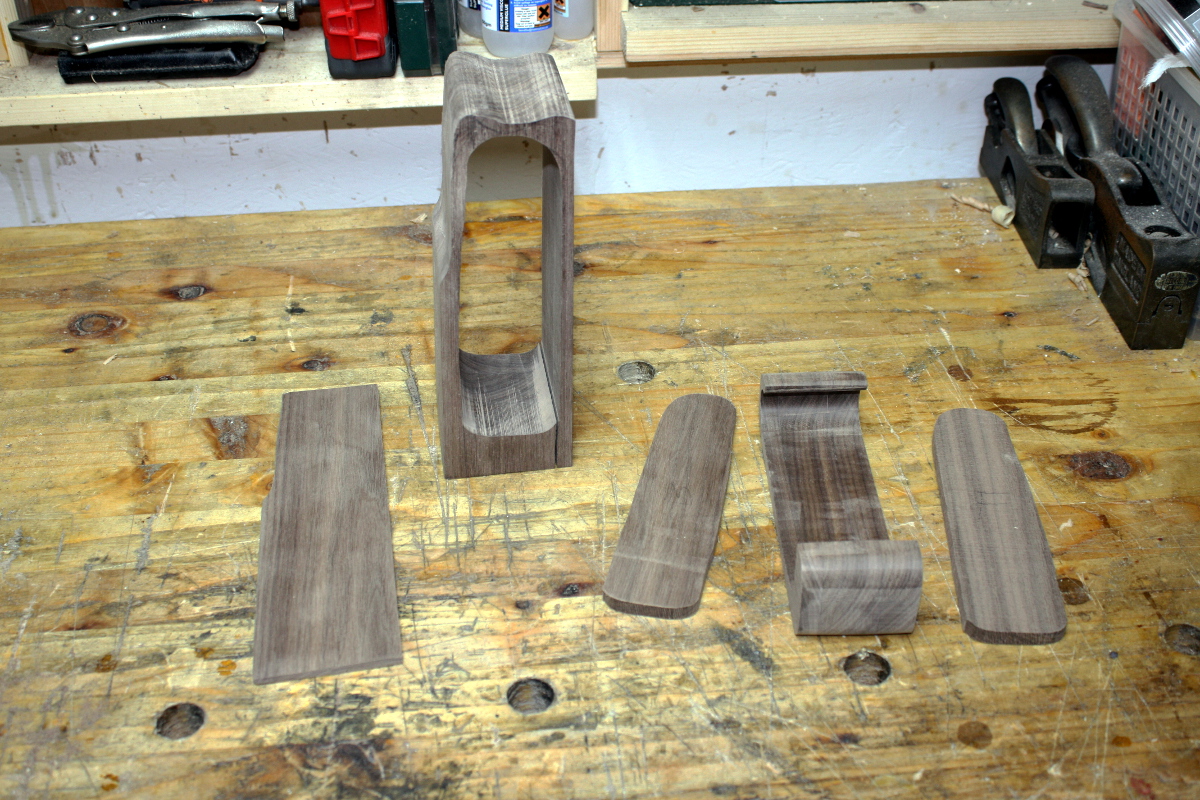 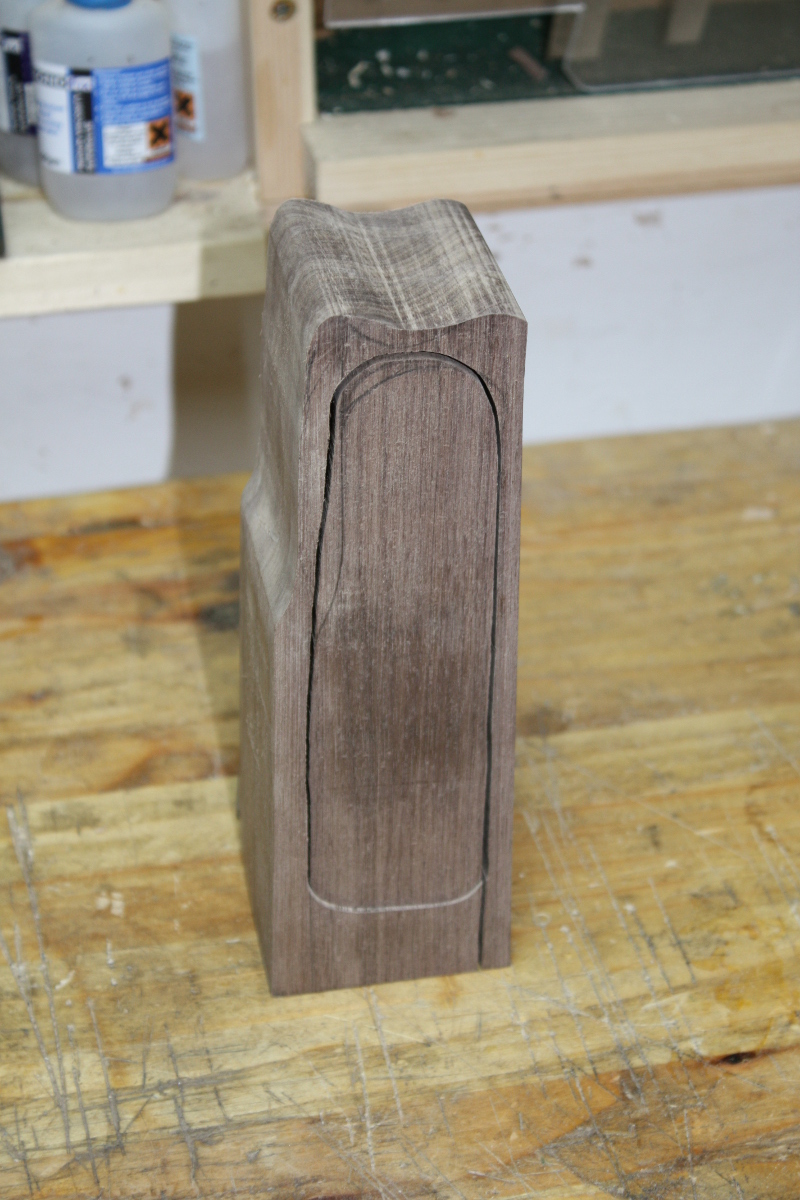 Glue-up tonight, more sanding tomorrow, some oil and a coat of shellac and done.

One box, all the clamps. How many clamps should I bring to the glueup?

And I’ll leave it there. I’ll try to get another coat of osmo on the legs tomorrow morning before work and another in the evening and if I can, that should be the table complete. I’ll assemble it, take a few photos, and then pass it on to its intended recipient.

Honestly, I’m not screwing around with the photo here, it actually is black enough that it’s confusing the camera’s not-so-clever white-balancing.