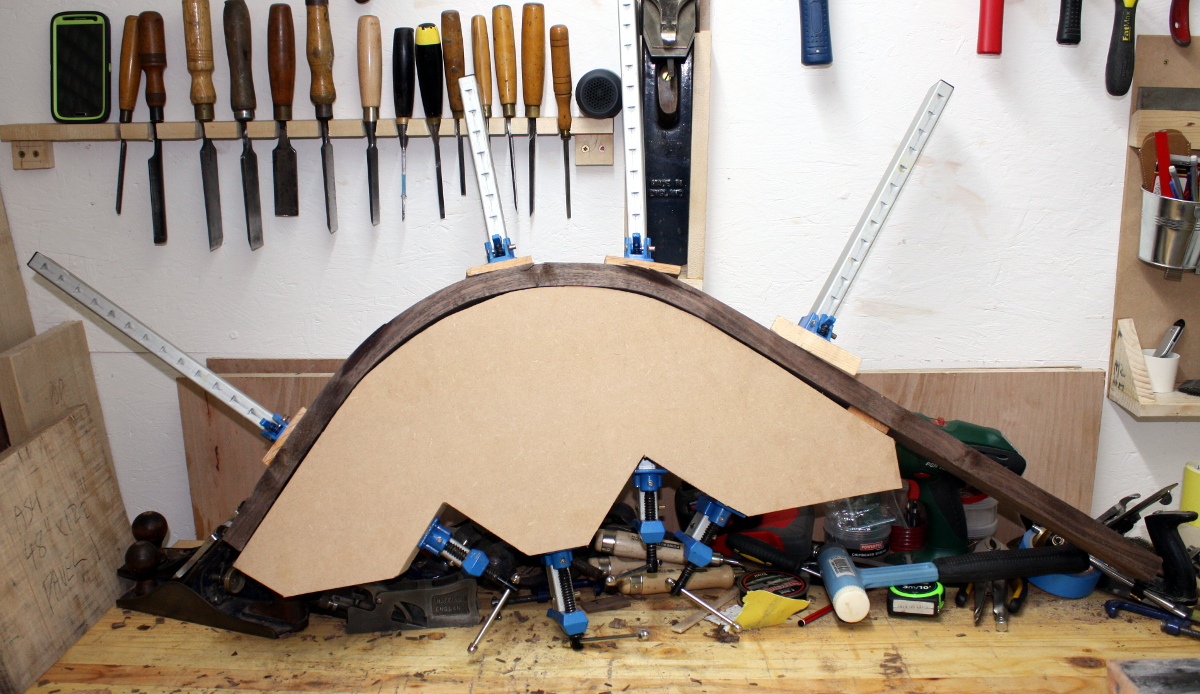 Well, that didn’t go as well as I’d hoped.

The steaming jig was ready, the drying form was ready. all the shopping and other stuff was done yesterday, so this morning I finished planing up the two candidates for uprights so they matched perfectly in size, rigged up a wide compression strap from three narrower ones (thanks addresspal for losing my order for a wider one) and then into the plastic tubing one went, and in went the tube from the wallpaper stripper and away we went. 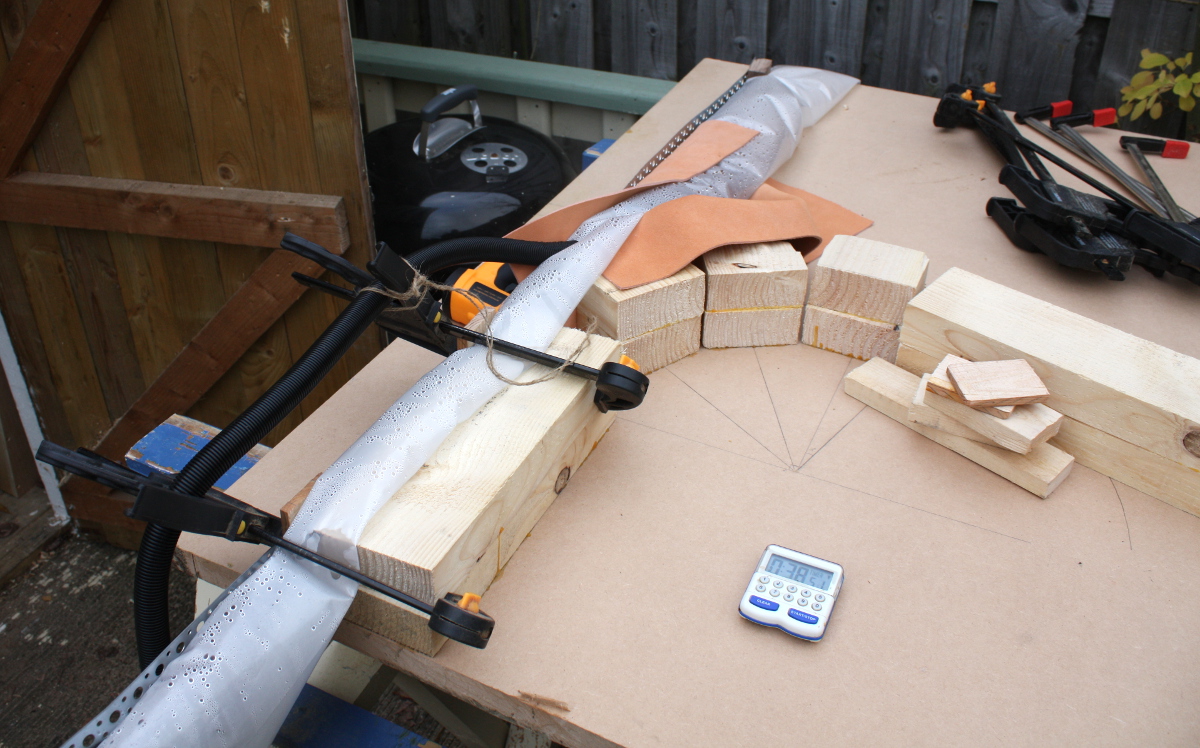 It got steaming pretty quickly, but it was a rather chilly breezy day today (down around 10 degrees or so air temperature at this point) which was depressing the temperature a bit every time the wind breathed wrong. 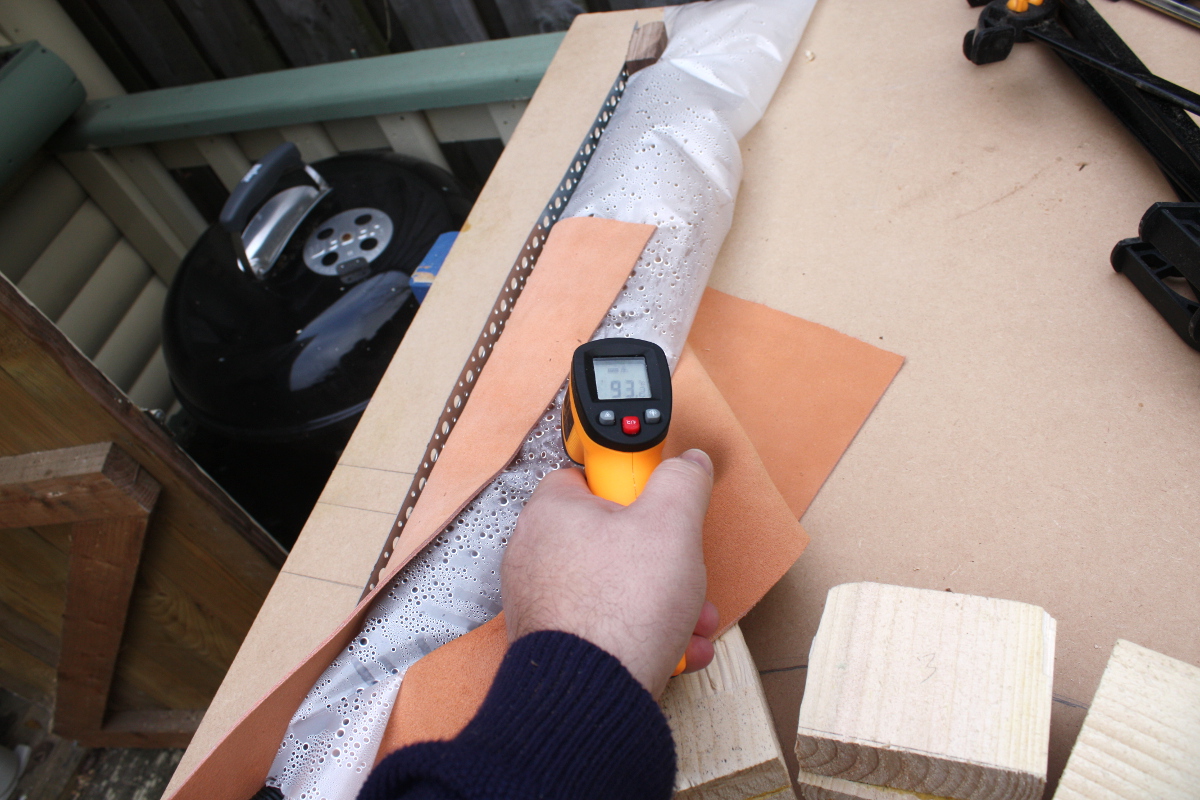 Some insulation was needed, so the airing cupboard got raided for towels. 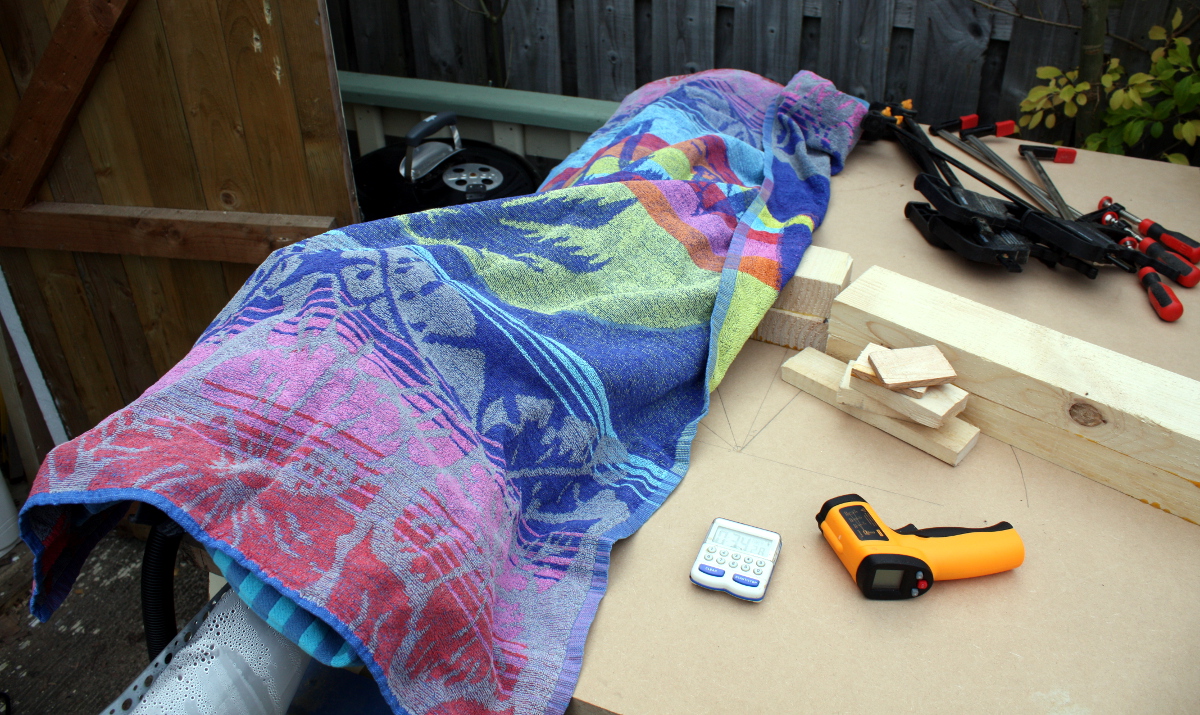 And then it was just a case of waiting while the wood steamed, and refilling the tank of the wallpaper stripper about 45 minutes in before it ran out.

While waiting, I worked on the platform for the mattress. First up, double-check that the components matched in size.

Yup, all good. Then took the crossmembers, left the middle one aside for now, cut the other two shorter by about an inch, marked up for a half-inch wide mortice and tenon joint at each corner, and got chopping and sawing. I tried that method where you clamp a board in the face vice and put the board you’re morticing on the benchtop and clamp that to the board in the vice, and it works better than the method where you clamp the moticee board in the vice (morticee board? the thing you’re chopping holes in). 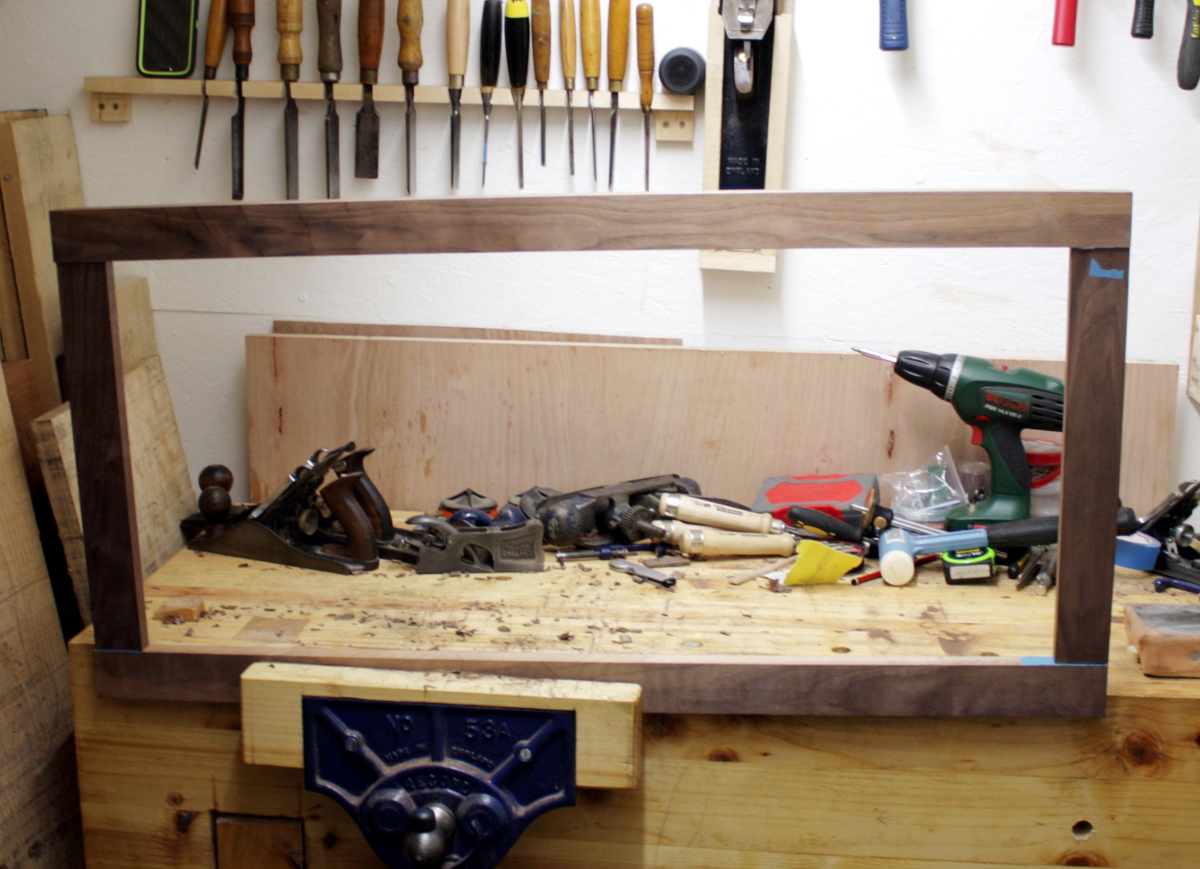 It didn’t turn out too badly. I’m tempted to drawbore these, or at least pin them, but I think the glue will hold them when I glue up. I checked the fit against the mattress again at this point and yup, it’s a solid match. Grand.

Now the downer. Once the wood had had 90 minutes to steam under blankets. it was time to start cranking it around the bending jig. This proved way more awkward than with the test piece and I had to change clamp types half-way through after realising that the quick clamps just weren’t going to let me crank hard enough as I was bending through 105° this time to allow for springback. 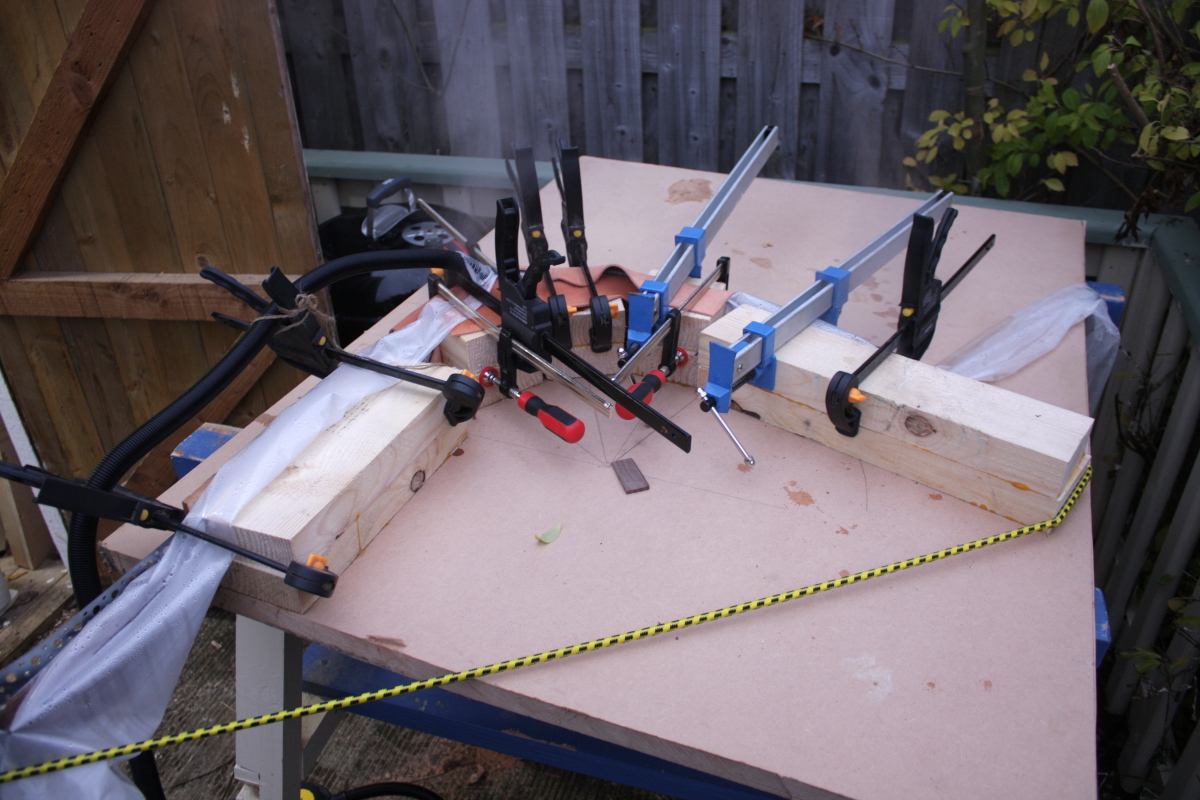 There were ominous cracking noises during this process 🙁

And I think I know why; the compression strap slipped during all the fumbling about and changing clamps and trying to crank the piece round. 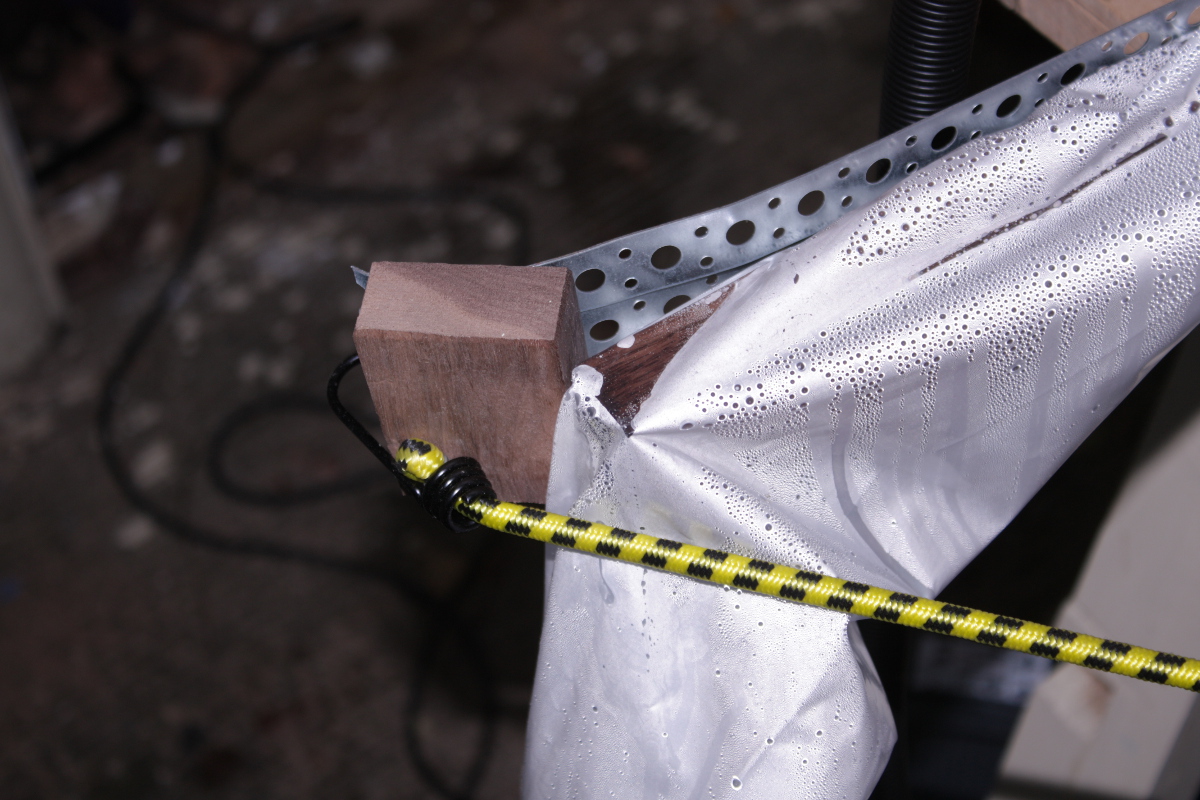 I threw the blankets back over the bent walnut and left the wood continue to steam for another 20 minutes until the water ran out, and then left it cool for 90 minutes while I made dinner and then transferred it to the drying form, which is at the final 90° bend and where it’ll stay for a week to fully dry. 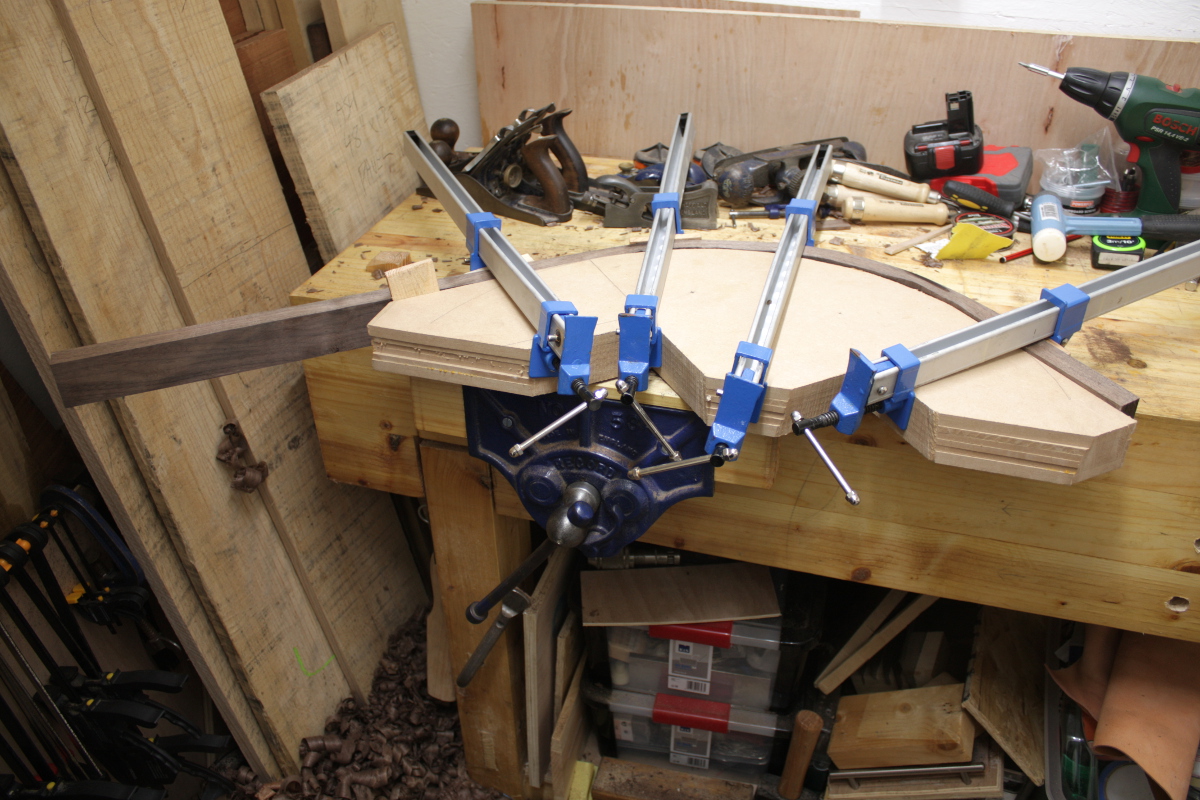 And there are cracks on the outside and not a fantastic bend on the inside. 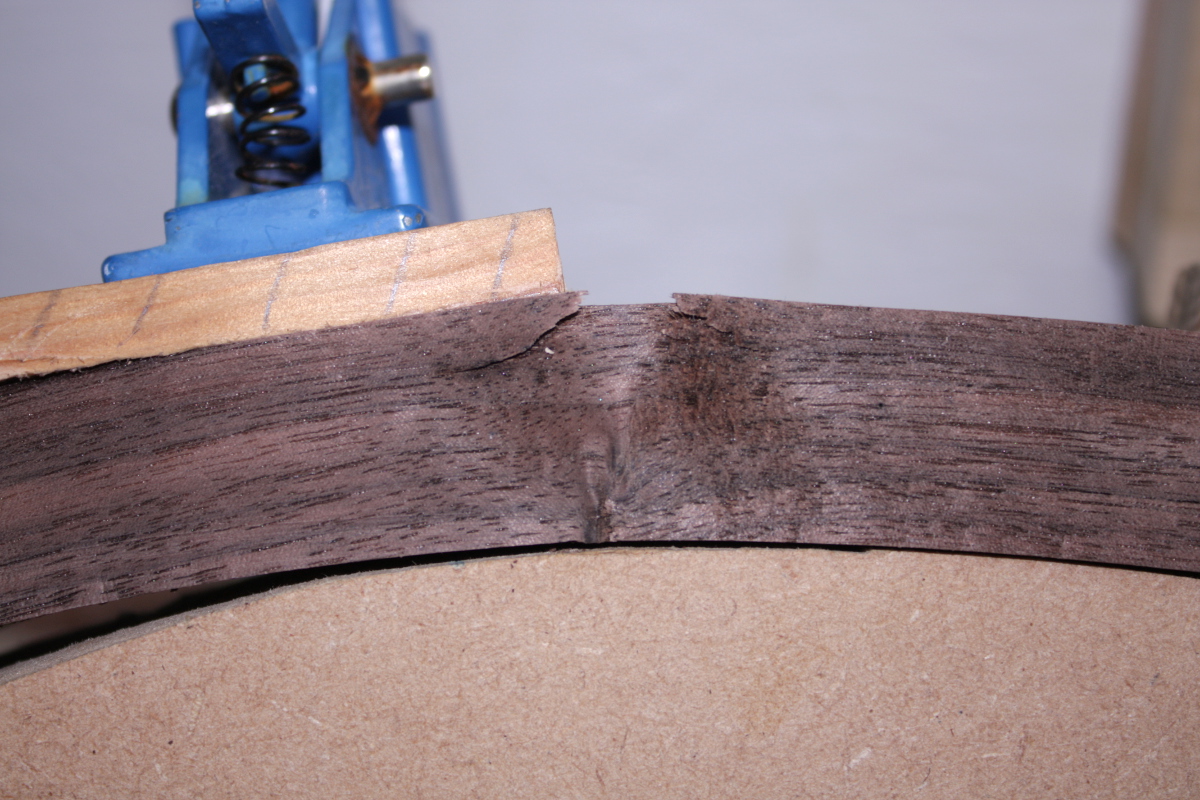 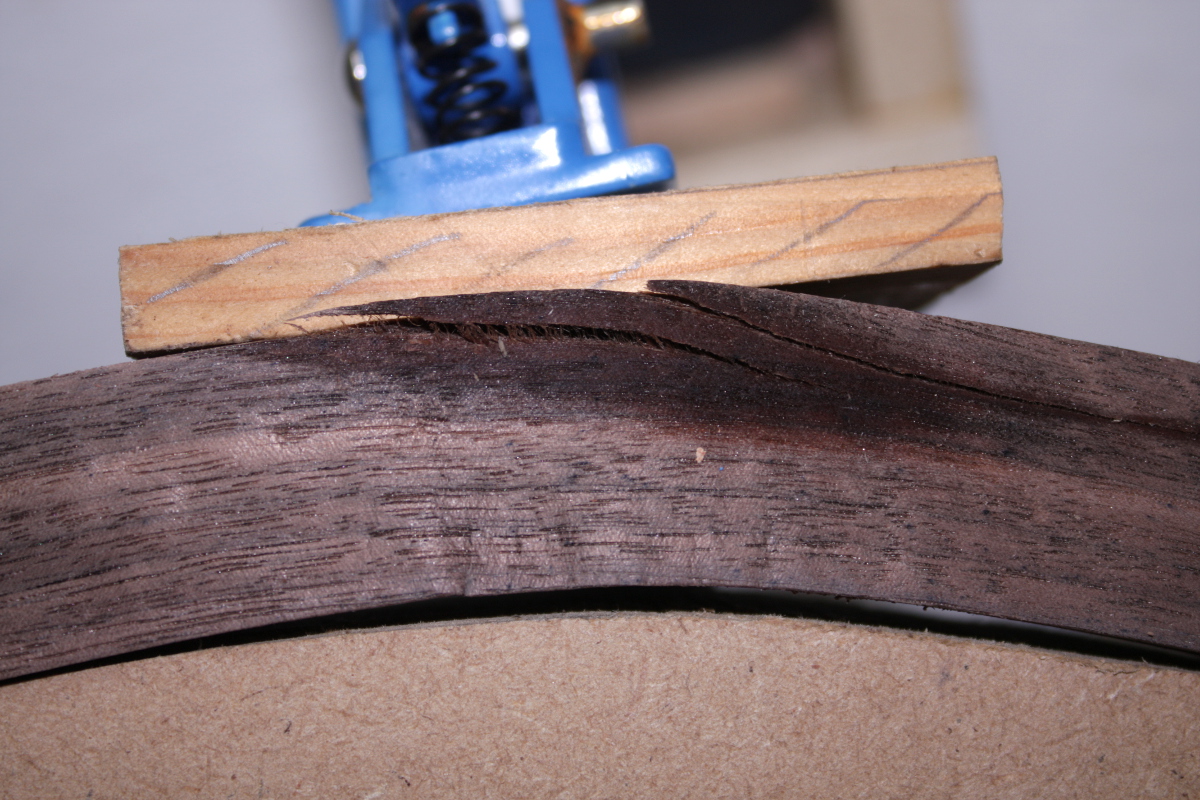 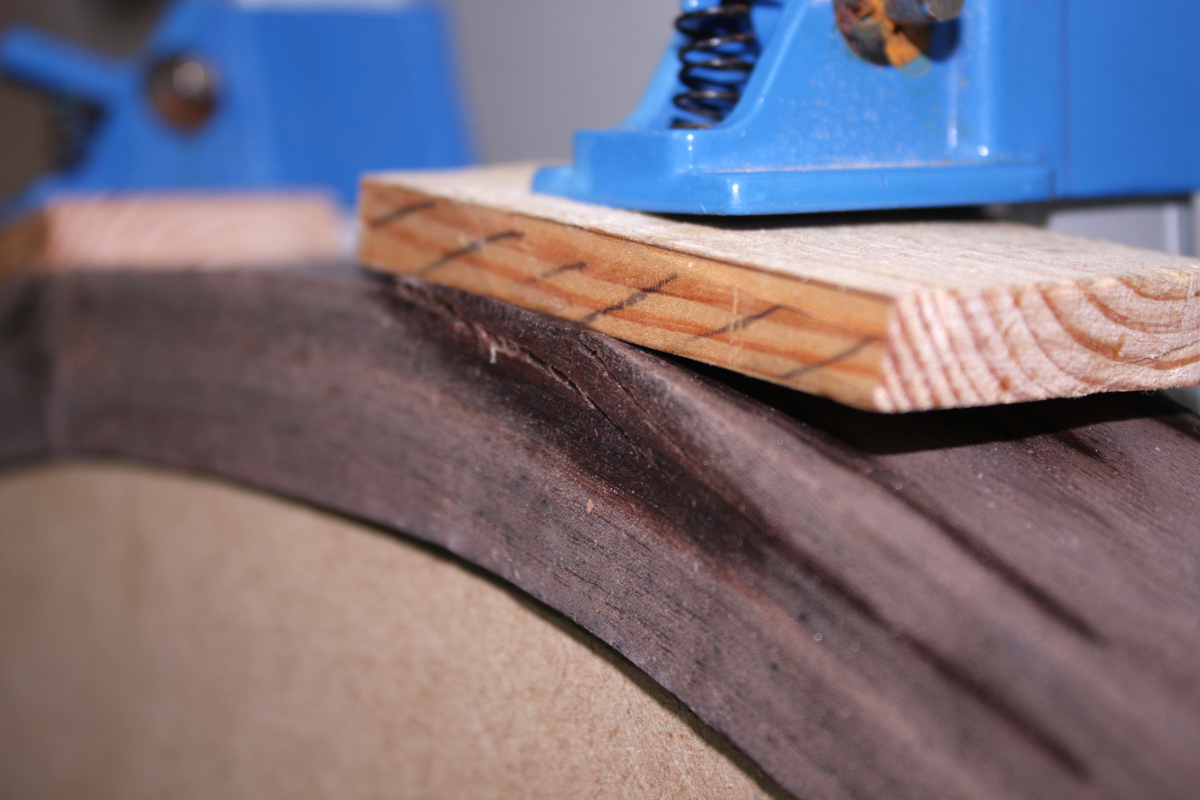 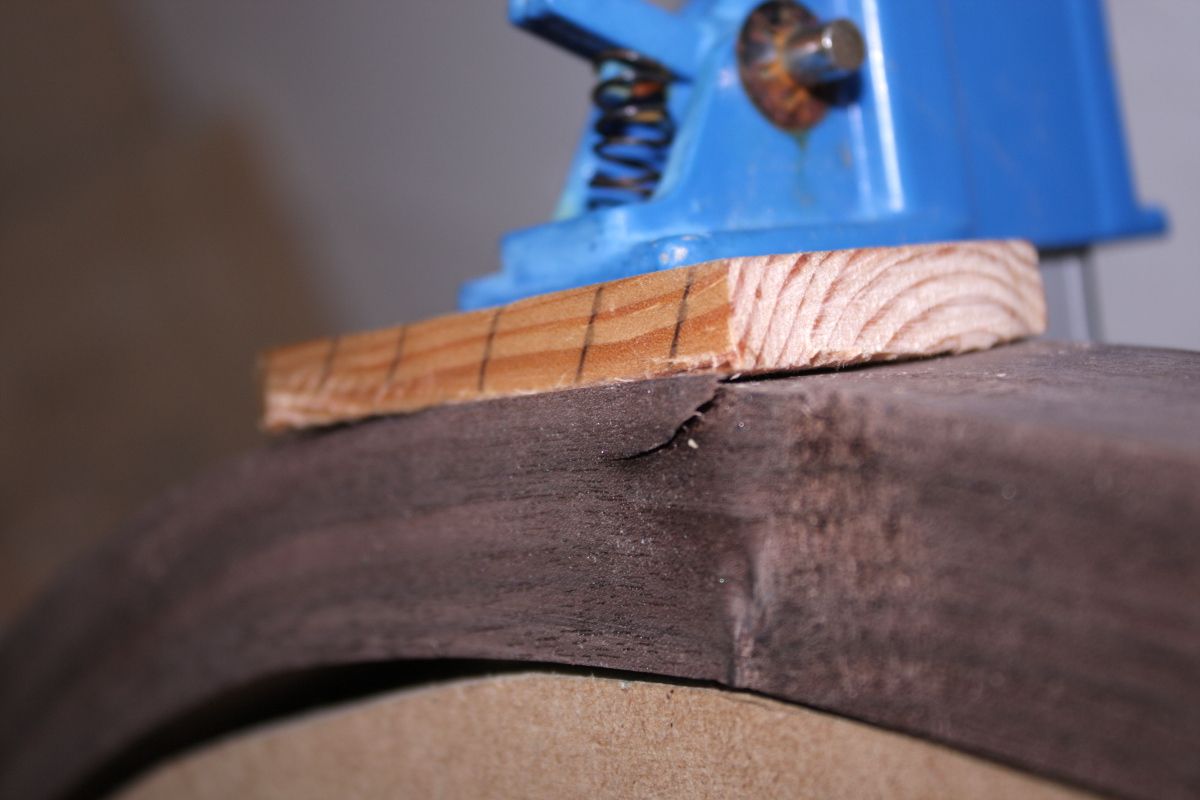 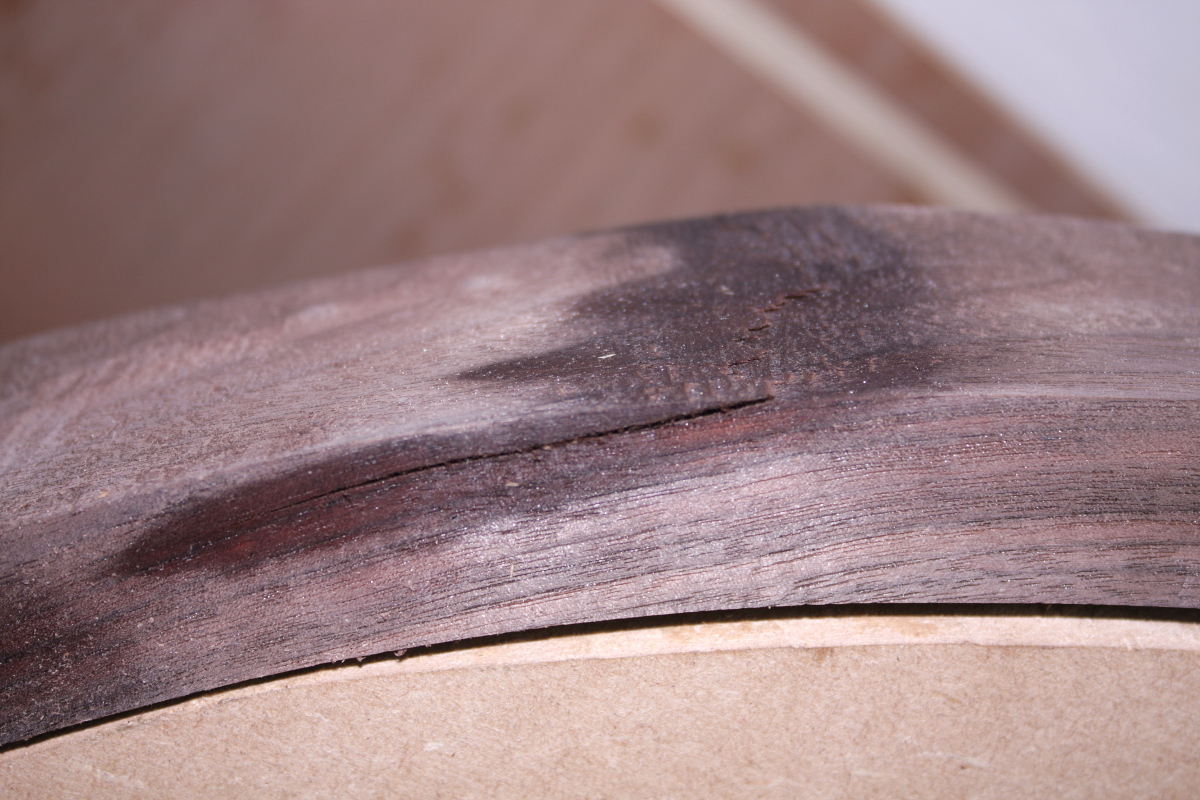 They’re almost all smallish, but how bad they’ll be eventually I won’t know until it finishes drying. The plan was to round the corners off anyway (no sharp corners welcome on a crib to begin with, but even less so when it’s a foot or two from your head during a 3am feeding) so if the cracks are localised to the corners that are coming off anyway, it might be salvageable. But I doubt it 🙁 Good thing I have more walnut on hand I suppose.

So for now it dries and we see how bad it gets. And while it does that, I get on with finishing the crossmembers of the platform (the middle one will be walnut and the others ash), planing up the ash for the panels in the base and the poplar for the drawer runners and sides, and a few other tasks. But the build is kindof stalling while waiting for all the uprights to be ready, which isn’t ideal. Have to steam another next weekend. If this weekend’s one is salvageable, yay. If not, final assembly is getting close enough to the delivery date that I think I need to have a backup plan…