Cleaning up and first pieces

So first thing this weekend was to clean up the shed. So obviously that meant building the cyclone dust collector 😀 I had tried this earlier: 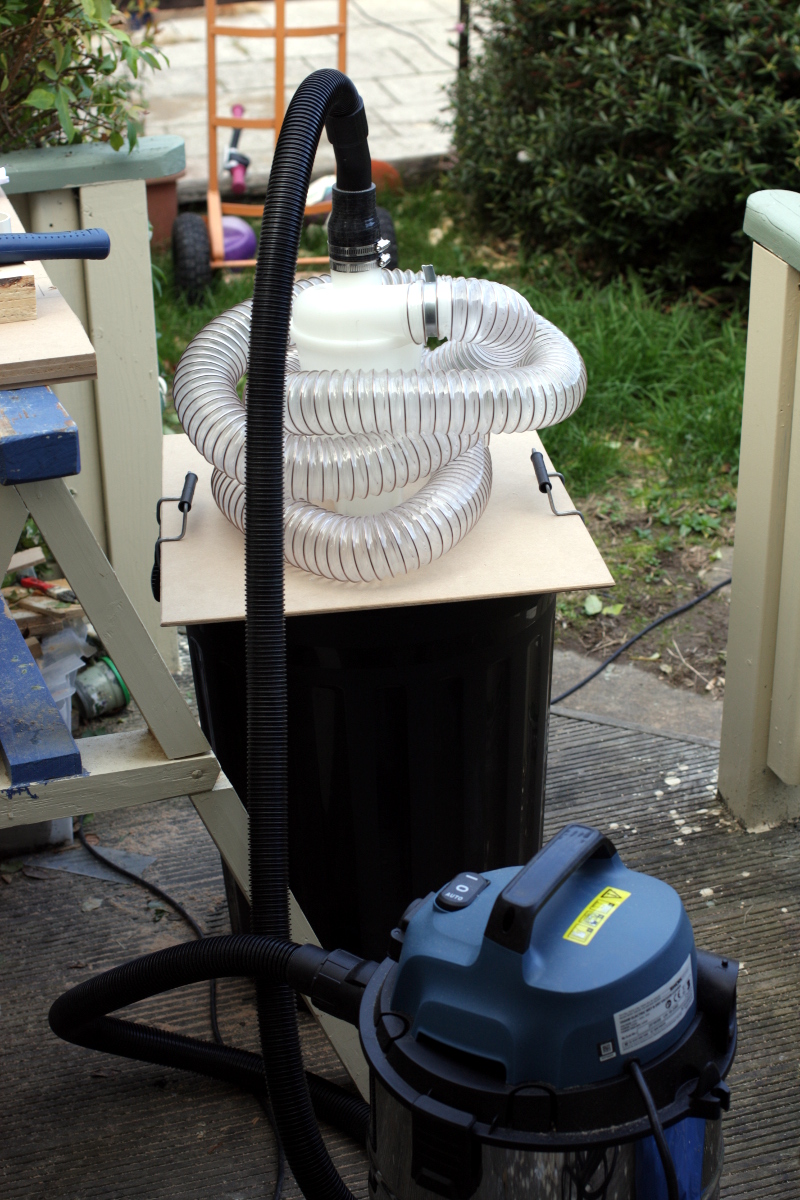 And obviously it didn’t work well because it leaked vacuum all over the place. Maybe with some sealant around the lip of the bin it would have worked, but meh, it was a trial run anyway, the plan was always to get a barrel instead. That proved a little awkward, nowhere around here sells them, so ebay it was and the thing got shipped from Germany of all places. Cut the hole in the top, fitted the cyclone to that, cut down the hose a bit because it proved to be too long to maintain vacuum, and then fired it up and it worked! So I started hoovering up the shavings….

….and the hose clogged. And then the vacuum kept building and, well… 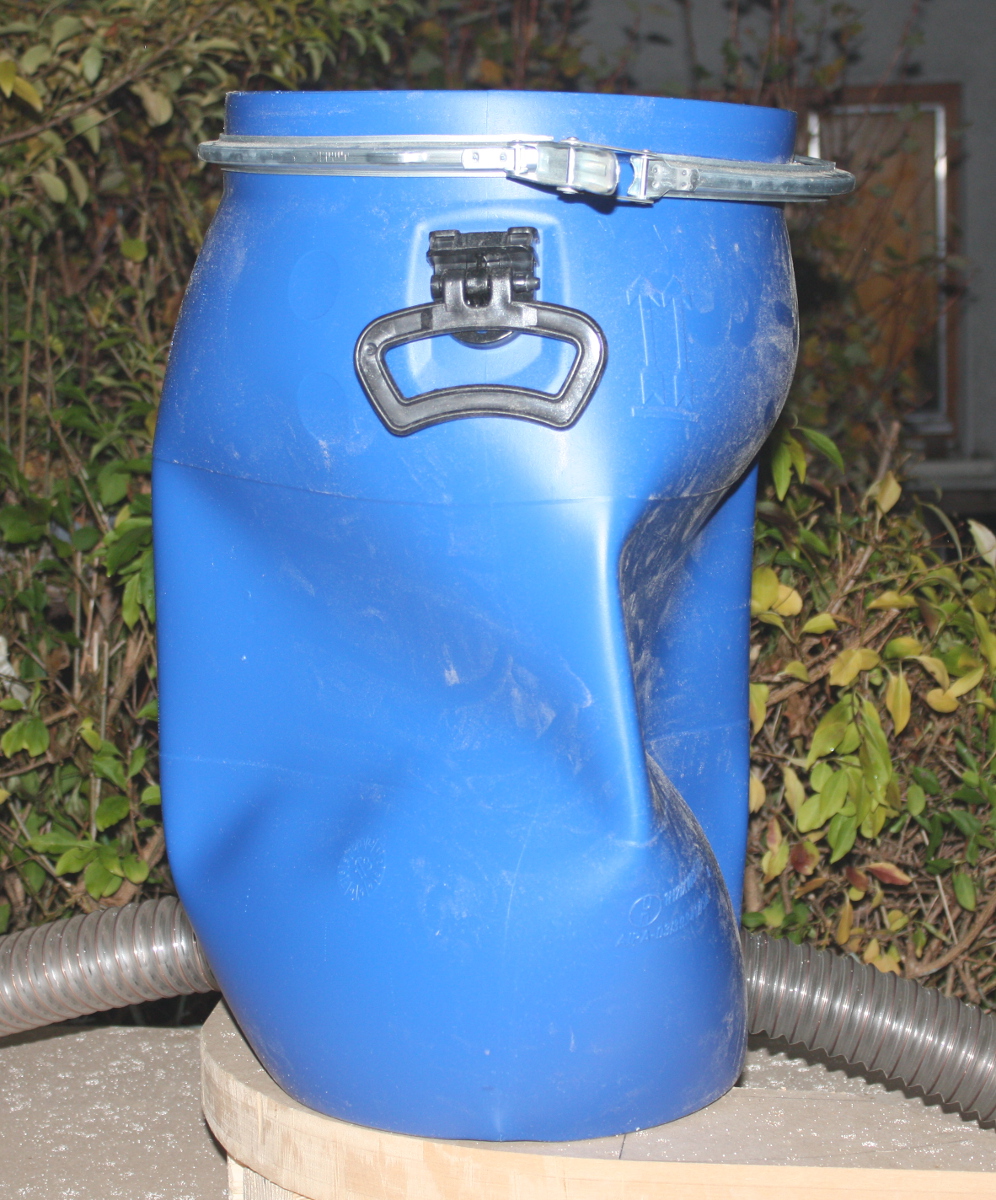 Popped it back out, resorted to dustpan and brush for the bulk of the shavings, then got the last few and all the dust with the new dust collection system.

Going to have to build a frame to hold those two in one cart type thing. But that can be later.

Then, moved some offcuts around and cleared a little under-bench space and finally got the toolboxes out from under the stairs and in under the bench.

Need to get those glues and finishes into another crate as well. Progress though, one step at a time…

And it left me with a 20″x20″ piece of MDF with nothing to do, so I figured I might as well start on the next shed fix, which is to get the marking and measuring tools up on the wall. 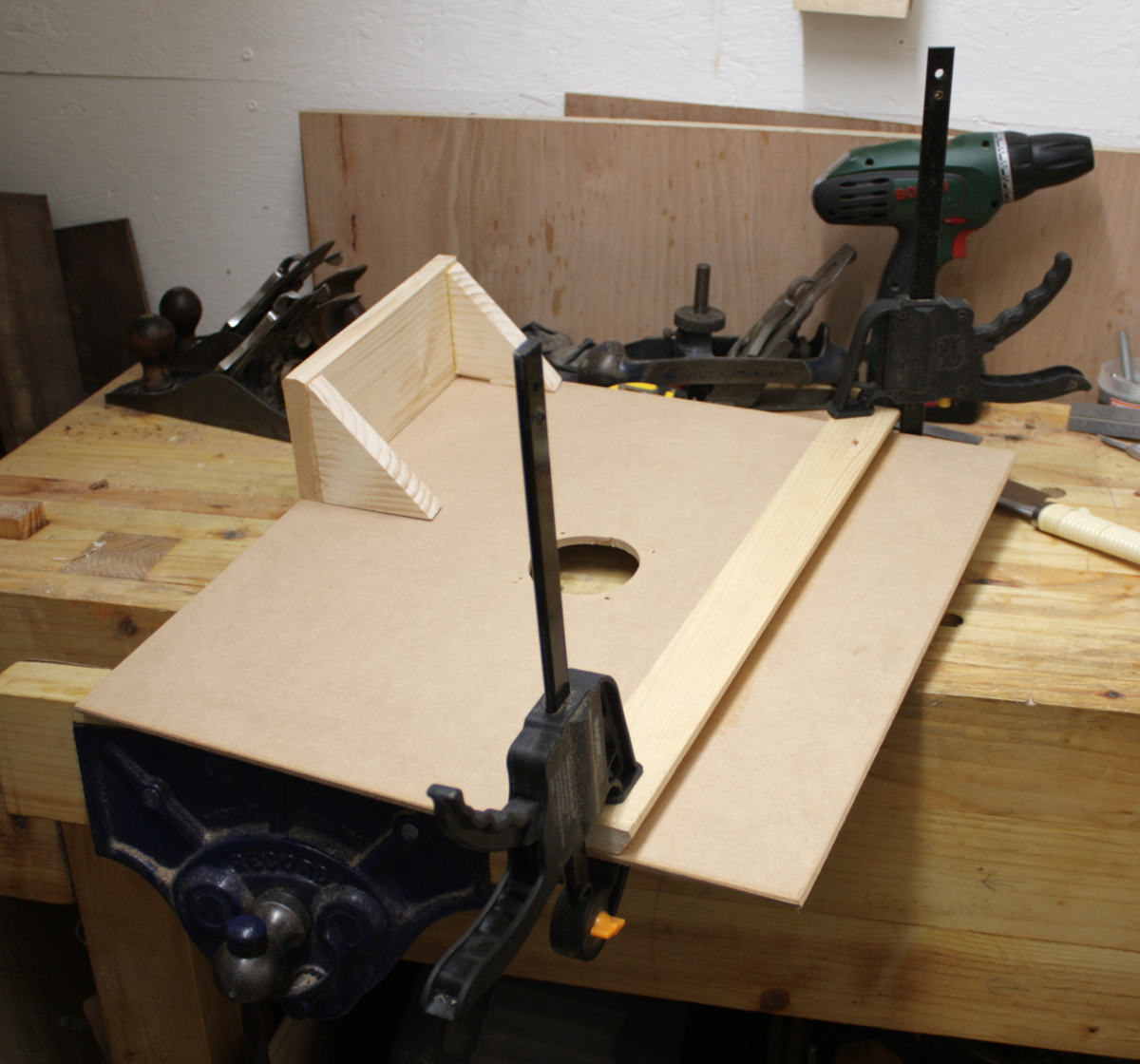 Need to let the glue dry and do some cutting later on. Before that… 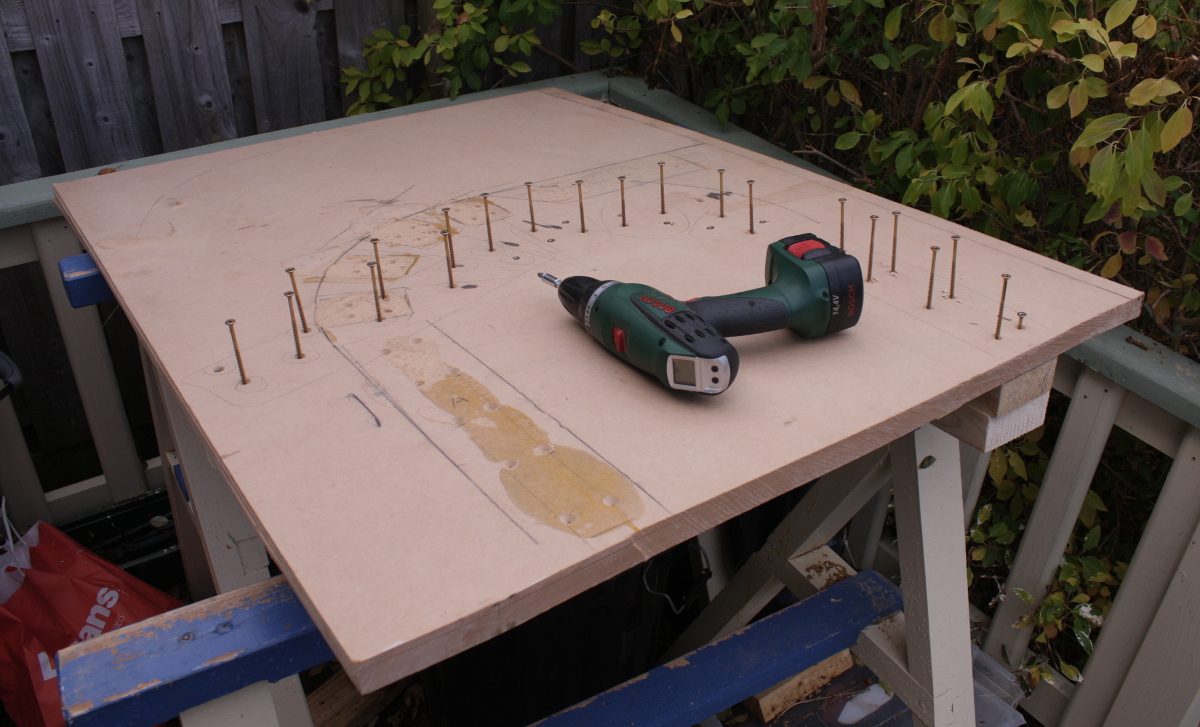 Assembling the bending jig (this is the reverse side, there are 2×3 laminated blocks on the far side glued and screwed into place. That’s a 10.3″ bending radius, and after the bend is done and it’s had a little while to cool on the bending jig, it gets transferred to a 12″ radius drying form for a week. And that took the next hour or two… 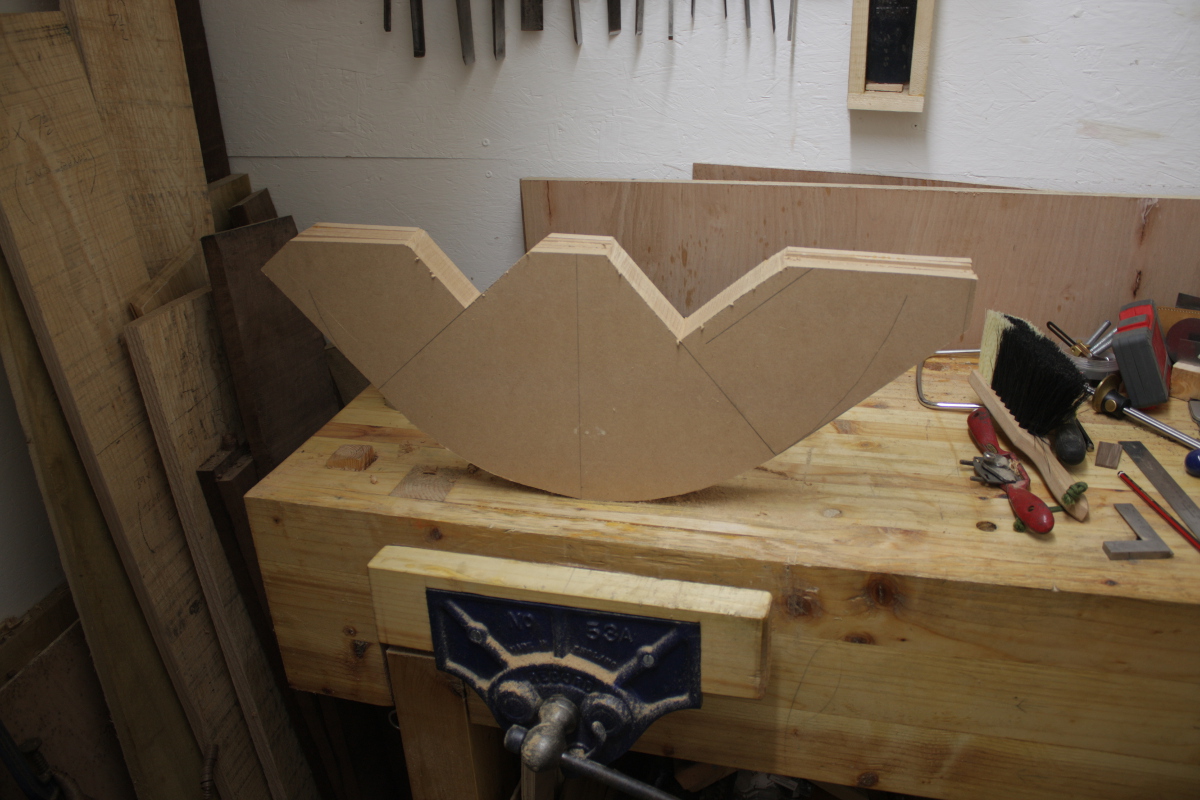 I need to drill a hole or three still, but this is mostly done. Now I just need that 2″ wide bending strap that’s in the post to get here and I can do some steambending next weekend.

In the meantime though, it’s past time to be cutting out components for the frame. So a bit of thought on what should go where, some staring at the mattress for the cot and holding sticks and measuring tape and so on and then finally got the marking knife out and started crosscutting stuff to within a few mm of final dimensions and working with the shooting board.

That’s the four crossbars for the ends, two of the long stretchers, two more to come, and the two back legs (one *might* get replaced later, it wound up thinner than I wanted by the time it was free of twist). The rest of the week is going to see more of this until I have all the components. Then I’m practicing the joinery on some walnut offcuts to get used to the wood, and then after the steambending I’ll get on with cutting the actual joinery.

After that, we have panels to do, a drawer to assemble, and then it’s final assembly and finishing. Inside of five weeks. Time to get a move on, and get the next board marked up for prep on monday… 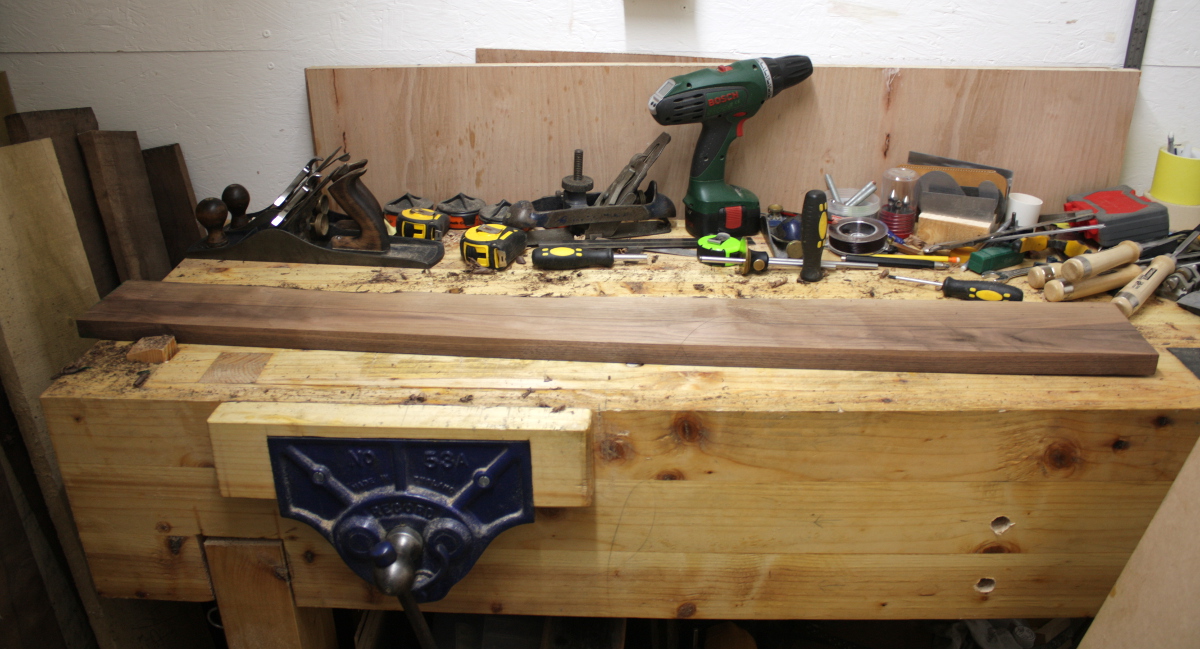 This entry was posted on Sunday, November 13th, 2016 at 2237 and is filed under Shed, Sidecar Cot, Woodworking. You can follow any comments to this entry through the RSS 2.0 feed. You can leave a comment, or trackback from your own site.