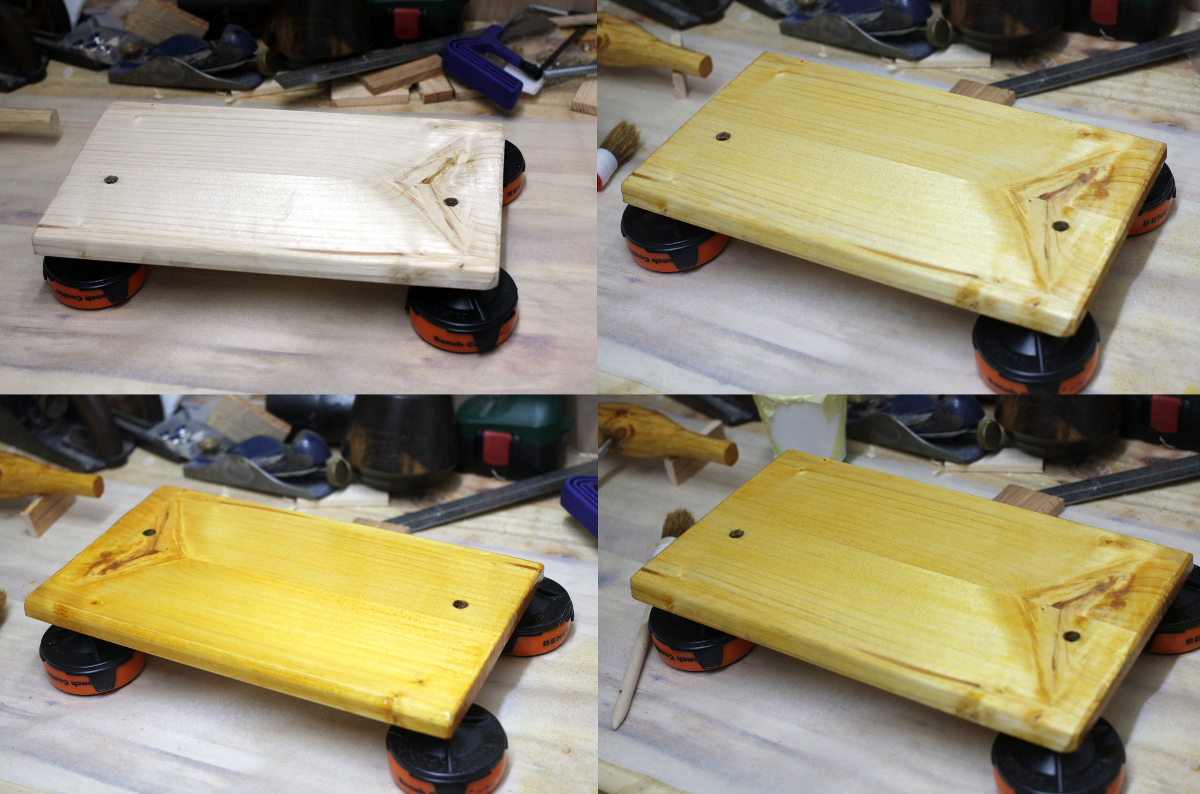 That point where the first coat of paint or finish goes on is such a dramatic change in the thing being finished, it really does seem like a magic trick of some sort. Even if it’s a cack-handed sort of affair. Today was two of those moments. First off, with the shed, which took quite a bit longer than your average david copperfield affair, eating two hours to get it done. Mostly because all of the funny things people tell you about painting while you’re stuck in a bush are pretty close to the truth. Still, it doesn’t look horrible: 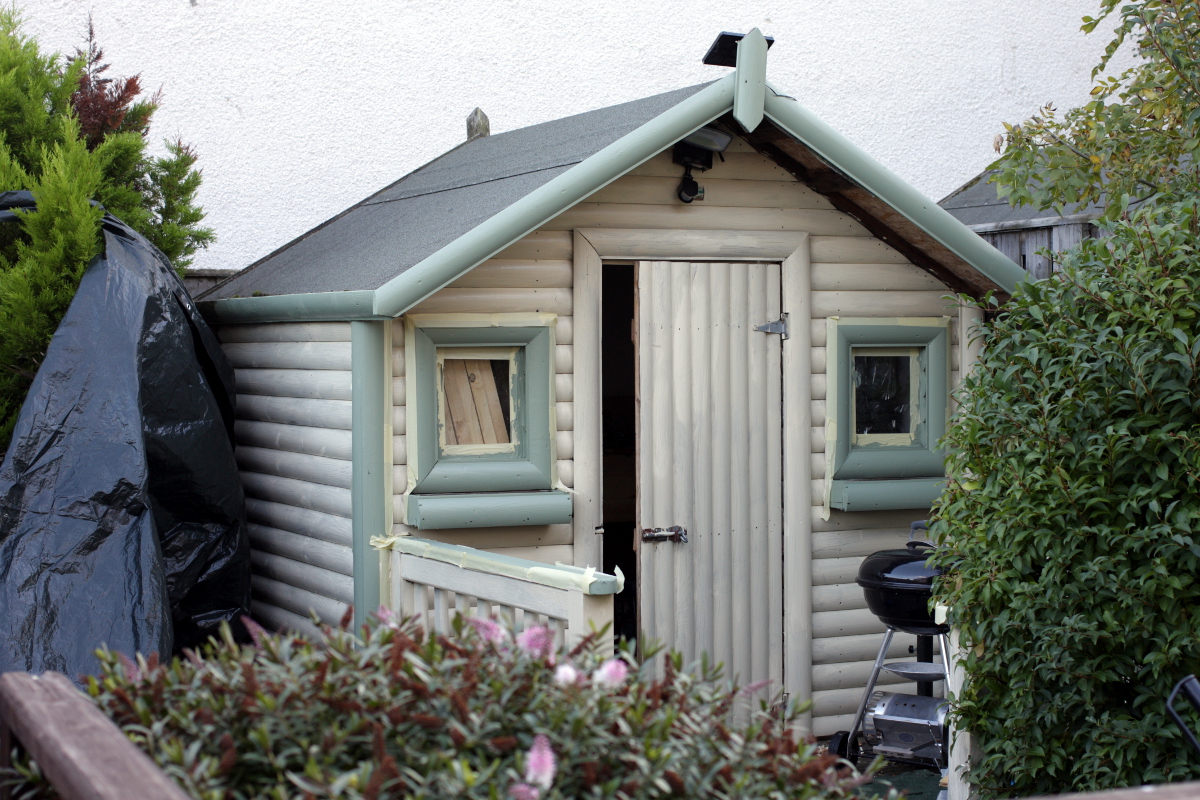 Okay, the tarp on the bush to the left looks horrible, but that’s how I’m keeping it from being a pine needle finish. Plus, it makes painting from within the bush a bit easier. Second coat in the next day or two, and then off comes the masking tape and the spiders can move back in to cover the whole thing in webs again…

Second up was the cheese press. I’m not hugely happy with the main nut on the crossbar for this, I think there will be more epoxy and a few small wedges employed, but at least it’s in an out-of-sight area; but I wanted to get the shellac on first today as all that’s left is bitwork after that really. I removed the metalwork and took the #4½ with its new 40° angle bevel and the cap iron crowded right up on the cutting edge, and smoothed the planks off. There’s something terribly gratifying about getting wispy-thin shavings after trying a slightly new way of setting up a plane. I think this one counts as a success. I did some last bits of whittling as well on the handle just taking off the absolute worst bits. I’m not happy with it at all really, but at least I learned how not to use a spokeshave.

Then on to the shellac. I’ve had some button shellac sitting in isopropyl alcohol for a few weeks now as another experiment, so I used that. One coat, wait 30 minutes, sand back with old beat-up 120 grit sandpaper (I didn’t have any 400 grit sandpaper. Something to sort out for when I finish the crib). Four coats in total. 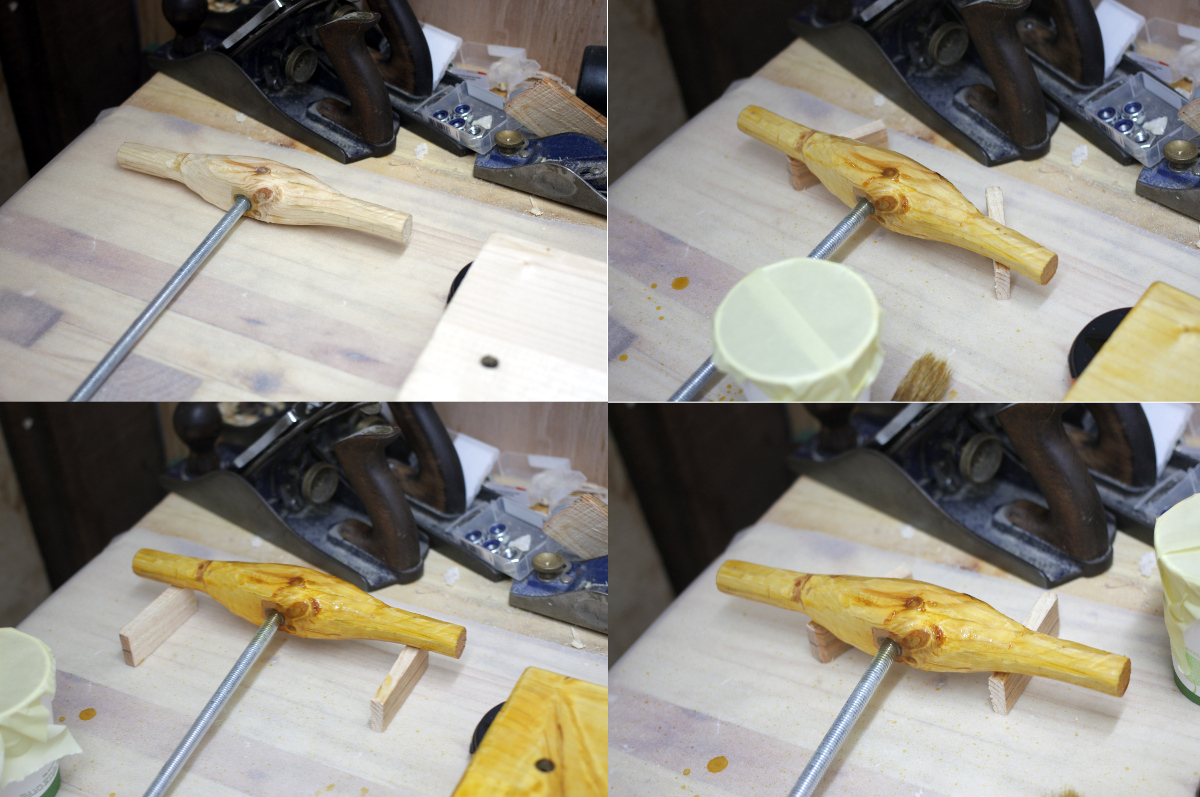 Clockwise from top left for each of those for each successive coat.

Tomorrow once it’s fully cured, I’ll hit the surface with 000 steel wool, then use the same wool to apply some briwax and then I’ll buff that out and that’ll be the finish done. I’ll drive the wedges to secure the center nut at the same time, add the metal hardware back in and assemble it and that’ll be that.

No work on the crib today, but the planing begins in earnest after the last bits of the cheese press are completed…