So I need to make something like twenty slats for the new project. About 30″ long, about three-eighths of an inch thick, or roughly 750x10mm – in actual fact the measurements are specifically “from the top of the drawer box to the height of the mattress plus enough height so a six-month-old couldn’t reach up, grab the top and haul themselves out of the cot”, so metric vs imperial isn’t even all that useful, but such is the way of things if you make stuff to fit I guess. The average length of a six-month-old from toes to shoulders is around 44cm-ish btw, though that’s for the average and it varies by several cm in both directions – there are charts for this sort of thing but they’re not hugely useful, because they don’t have a chart of how high an obstacle determinedly self-destructive newborns can get over. I’m going for around 30cm/1′ from the top of the mattress, which gives me a slat length of around 28″ish when finished, so 30″ is a decent rough cut length.

The plan for last weekend was to make one slat, which would almost be sacrificial as I’d be testing the process along the way, building jigs and figuring out what worked and what didn’t. So the starting point was a 30″ long, 8″ wide, 1″ thick board of nice ash.

It’s that short wide one at the top of the pile nearest the camera there. And that saw is where I started with the resawing. Japanese saws are fantastic at cutting through thin material or crosscutting – it whipped through those boards in that photo in nothing flat. But resawing is a pig of a job, you’re effectively cutting through thirty inches of eight-inch-thick board (which just happens to be an inch wide). It took all of Friday evening and half of Saturday morning to do that. And half-way through I switched from the Japanese saw to a western rip saw (I think it’s an old Disston, but it’s second-hand and the plate etch is long gone). I stopped to run a saw file over the teeth a few times as well before I started.

And no, the western saw wasn’t better. In fact, it was terrible, but that’s because the plate had a bow in it that I didn’t notice at the start. I need to straighten that thing out before trying it again. The next board I resaw, I’m going to rip to 2″ wide lengths first, then resaw each of those. It’s more cutting, but I figure resawing a 2″ wide board will be easier than an 8″ wide one. I may even take photos – this time I was too busy sweating and swearing at the Disston. But eventually I got the board split, and the half resawn by the ryoba was nice and relatively clean; but the half done by the Disston was a messy disaster. Instead of two almost-half-inch boards, I had one that was just over ⅜” thick and one just over the half-inch mark. Lots of planing needed, so I will probably get four or five slats out of that board at most instead of the maximum possible of eight. I have two 30″ lengths cut and a 34″, and two more I can get out of the other 5′ long ash board I have, that gives me a maximum of forty slats I could make. The design says twenty are needed, but I want some room for wastage. The ash I have is set aside just for slats for right now; anything left over can get used for other things (I might make it into the drawer if I had enough). The frame is walnut, I have more than I need for that, and I have some poplar for the drawer, so I have enough material. The real risk is that I’m running low on swear words to use on the saw in the process and I might wind up repeating myself.

So after resawing the first board, I ripped a one-and-three-quarters length off the three-eighths-ish board (gauged by finding a piece of wood that looked like it was the right width for a slat and then setting that aside and using it as a template), which was a much faster and easier job, and then I looked at how to get it to the right thickness. I found another piece of hardwood I had (I have a largish box of off-cuts that are one to two feet long from here for uses like this) which looked like it was the right thickness – about three-eights of an inch or to be exact about it, “thin enough to not be chunky whilst being thick enough to not look overly delicate as a slat”. I ripped that down into four 1cm-ish-wide lengths, and used them to build a Paul Sellers-alike thicknessing jig (it looks like this one, but the original video is behind a paywall) with a length of plywood and a pair of 2x1s (I have a small stack of these lying around after building the bench): 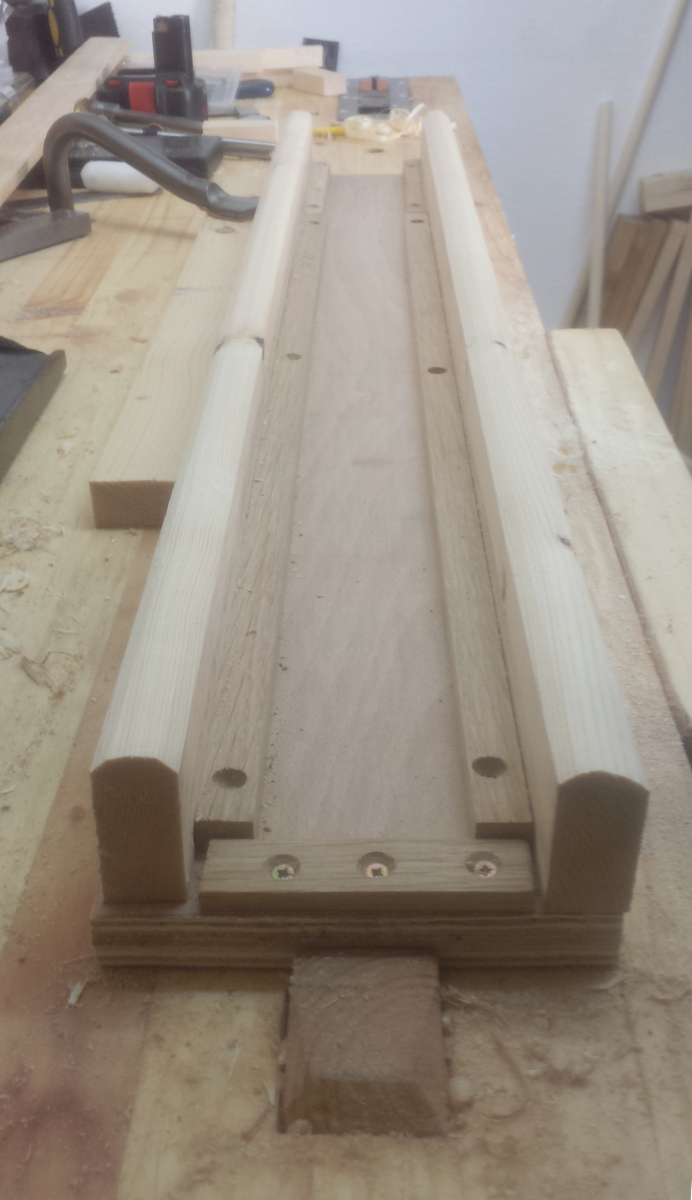 It’s very simple in use – put slat blank in the middle, put plane on top, push back and forth until the plane no longer takes shavings (the thin slats on either side hold the plane off the work at that point). Optionally, flip the blank over half-way through process. End result – one slat, planed to uniform thickness with the twenty others you’ve done. I think that part of the process we can say is solved at any rate.

Then I took the test slat, tried flexing it to check for actual strength (it’s fine unless the baby has been exposed to gamma radiation and is angry at something), rounded over the thin edges with my record 60½ block plane, cursed at some tearout on one side and added “dig out card scrapers and sharpen them” to the list of things to do, and then built a shooting board to plane the ends: 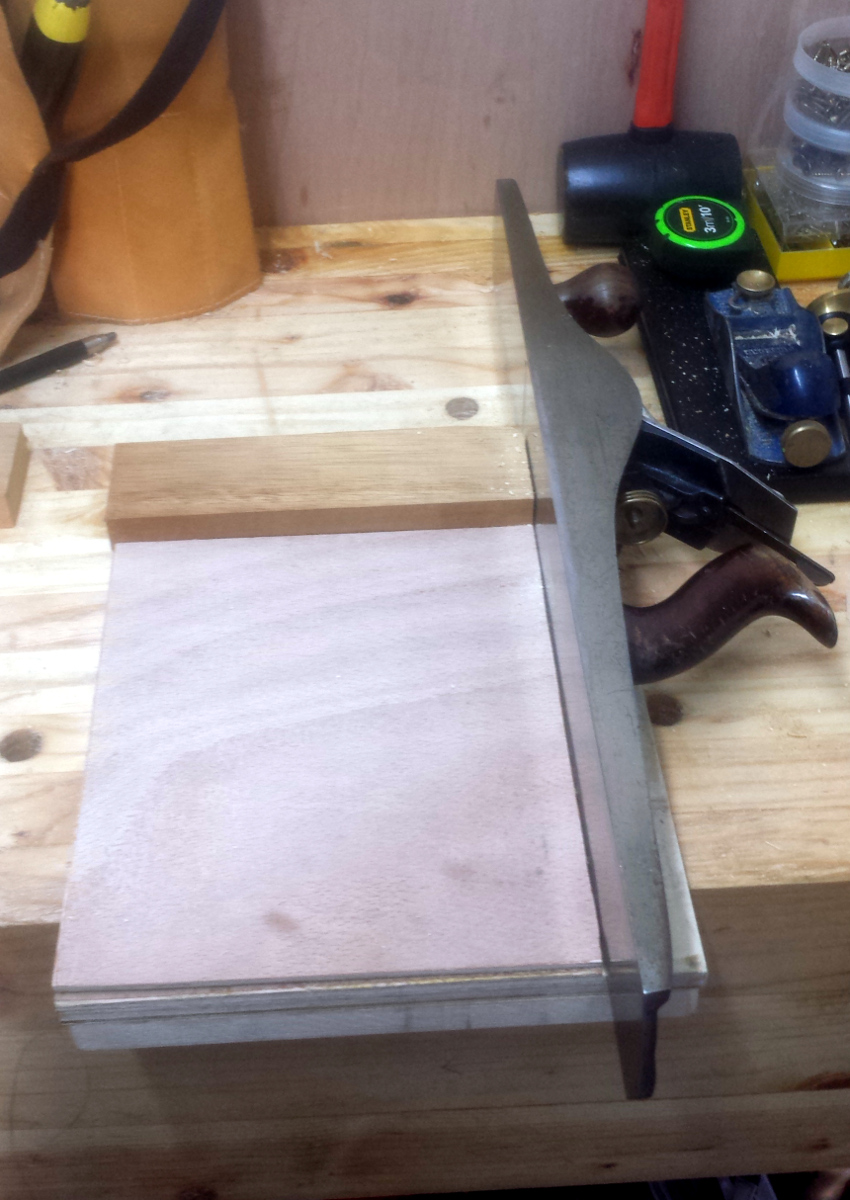 …and then cut a test tenon at the top to see how awkward that job was going to be. 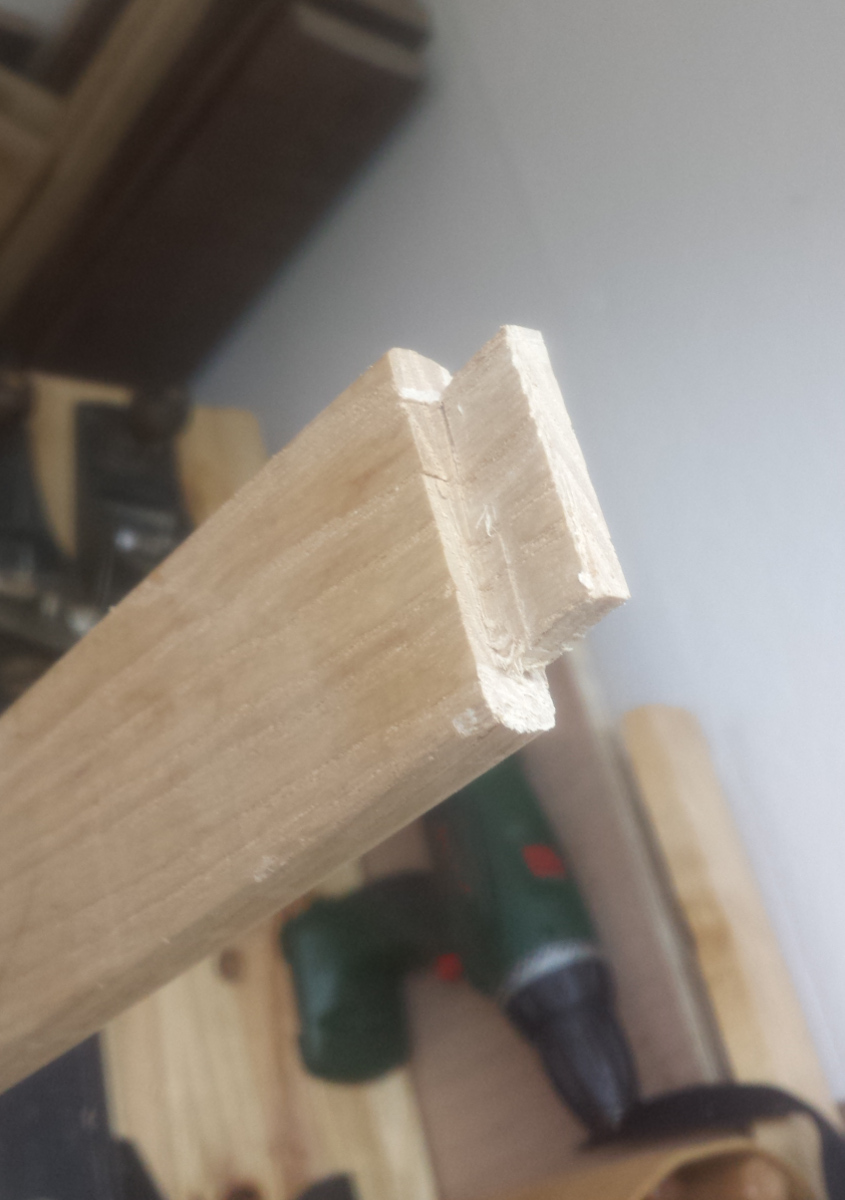 Answer: don’t do this on the day you resaw and plane everything, come at it fresh on a new day. It’s doable, but it requires finesse and I had none of that at all after the resawing. I’ll have to resharpen my chisels – and maybe even wait for the new old chisels I just bought to arrive as they’re more delicate ones intended for this sort of thing while the ones I have are designed to be big and beefy for chopping out holes in big-assed lumps of timber – and I also need to use my better saws for this job.

Actually, which is my better saw? I have a few at this point – a small set of japanese ones from dictum, and from ebay a Disston and a smaller S&J rip saw, two S&J panel saws, a honking great tenon saw (from the days when they meant it when they categorised these things), a carcass saw and a dovetail saw. All the ones off ebay are older than I am. Actually, as far as I can tell, several of them are older than Ireland is and at least one is from the 1800s. For fits and giggles, I sharpened the carcass saw to test: 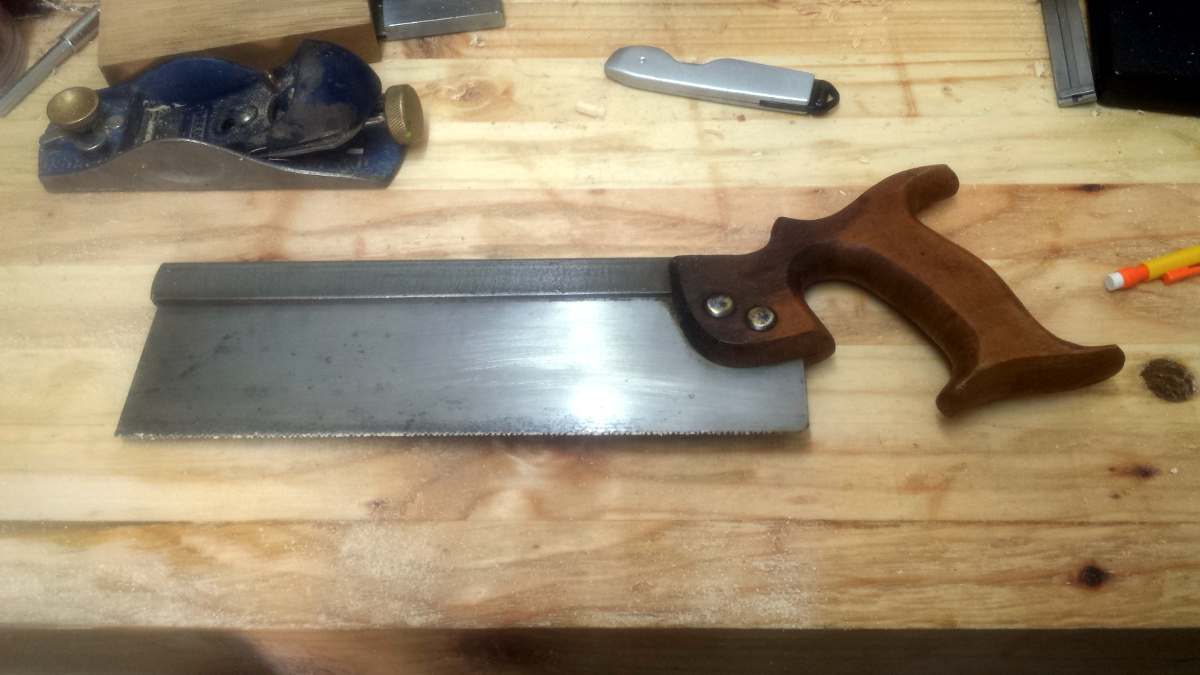 And I put it up against some of the japanese saws: 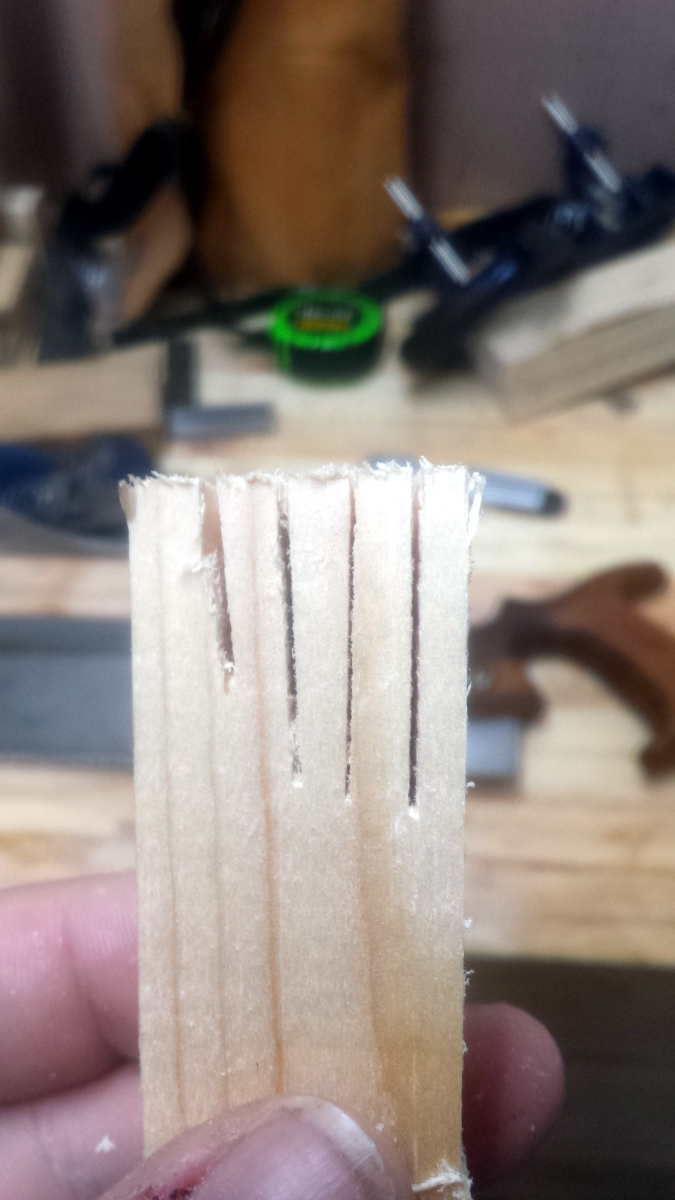 From left to right that’s the oldest ryoba I have (on the ripping side, which is its worst facet, it’s far better on the crosscut side); the newly sharpened carcass saw; the dozuki saw; and the newer ryoba (the small new one, not the godzilla-killing thing I got for the bench). We have a definite winner in the dozuki for the role of dovetailing, but I think the test needs to be re-run.

Firstly, my saw sharpening was a bit perfunctory, and done with an old saw file I have my doubts about, I’d like to do it properly, but that might entail taking a bastard file to the teeth and redoing them from scratch, so I need to think about that – I’d need to make a very basic jig or two and also buy a junior hacksaw to reestablish the teeth right, which is a longish job but would let me recut the diston to 4tpi which might help with the resawing. I do have a new saw file on the way though, so I guess that’s where I’m heading anyways…

And more importantly, I didn’t test all the saws. So I guess at least I need to redo this with the same stroke count (or cut length) for comparison, and with all of the saws. And while the dozuki is probably the best choice for dovetails and similar fine work, the other saws are definitely not for the bin; I’d hate to try to resaw thirty more inches of ash with a dovetail saw…