Took nowhere near as many photos as normal today, because I kept getting ten-minute bursts in between rain showers to work in in the morning. But I got some work done – the stretcher tenons got cut, the mortices in the second leg got drilled out in the top mortice and half-drilled out in the bottom mortice, and then I spent twenty minutes cursing and swearing, chopping at an inch-thick knot right at the edge of the mortice, stropping the chisel every few minutes to try to keep it as sharp as possible. 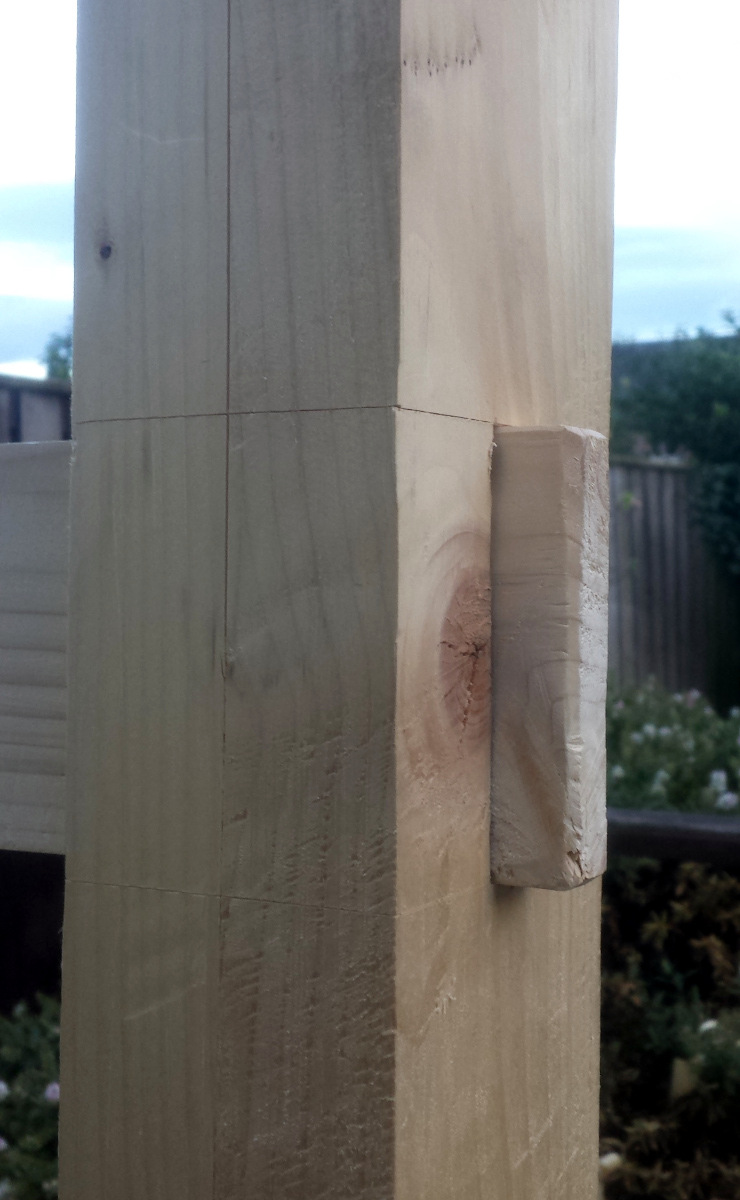 Git of a thing.

I’m actually learning how to freehand strop and sharpen reasonably doing all this, but it’s bloody rough – I wouldn’t trust myself to freehand anything more than stropping and light touchups on the highest grit diamond plate. I did see an interesting jig idea for sharpening on CloseGrain – it’s basically a guide block that lets you set the right angle at the start of the stroke, then you freehand through the stroke. Or, to explain better, look: 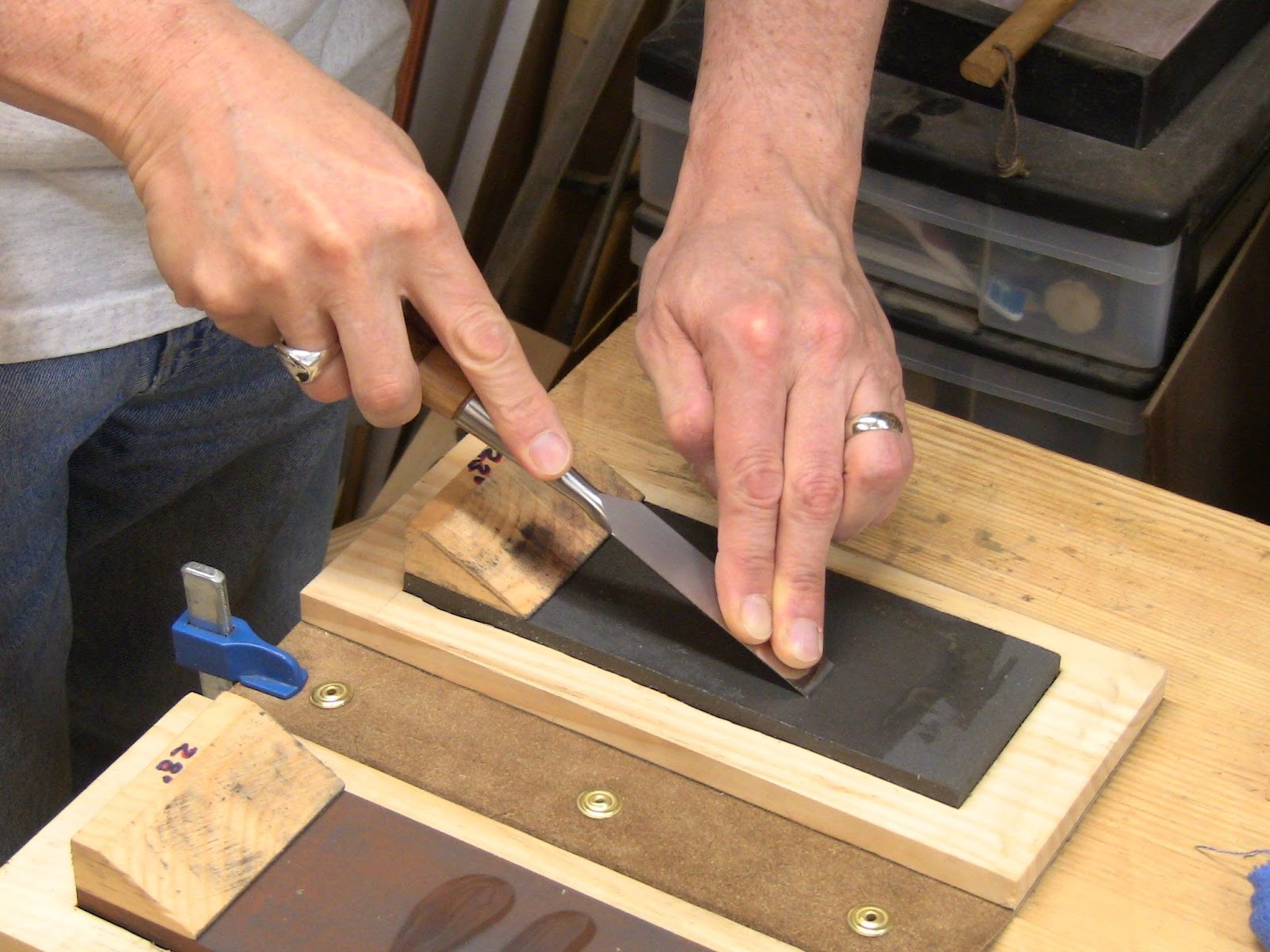 See, for someone like me who’s both cack-handed and doesn’t have anyone to look at what I’m doing and go “ah, there’s your problem…” (because yes, a child can learn this in a half-hour if taught by someone who knows what they’re doing — but how many amateurs have that kind of resource to hand?), this kind of thing seems like a brilliant way to learn. On the to-do list for immediately after the bench.

Anyway, got through that PITA of a knot and assembled the leg frame. And then realised that the frame was a pronounced A-frame rather than rectangular, because the lower stretcher was over an inch too wide. So a bit of fettling to the shoulders and… 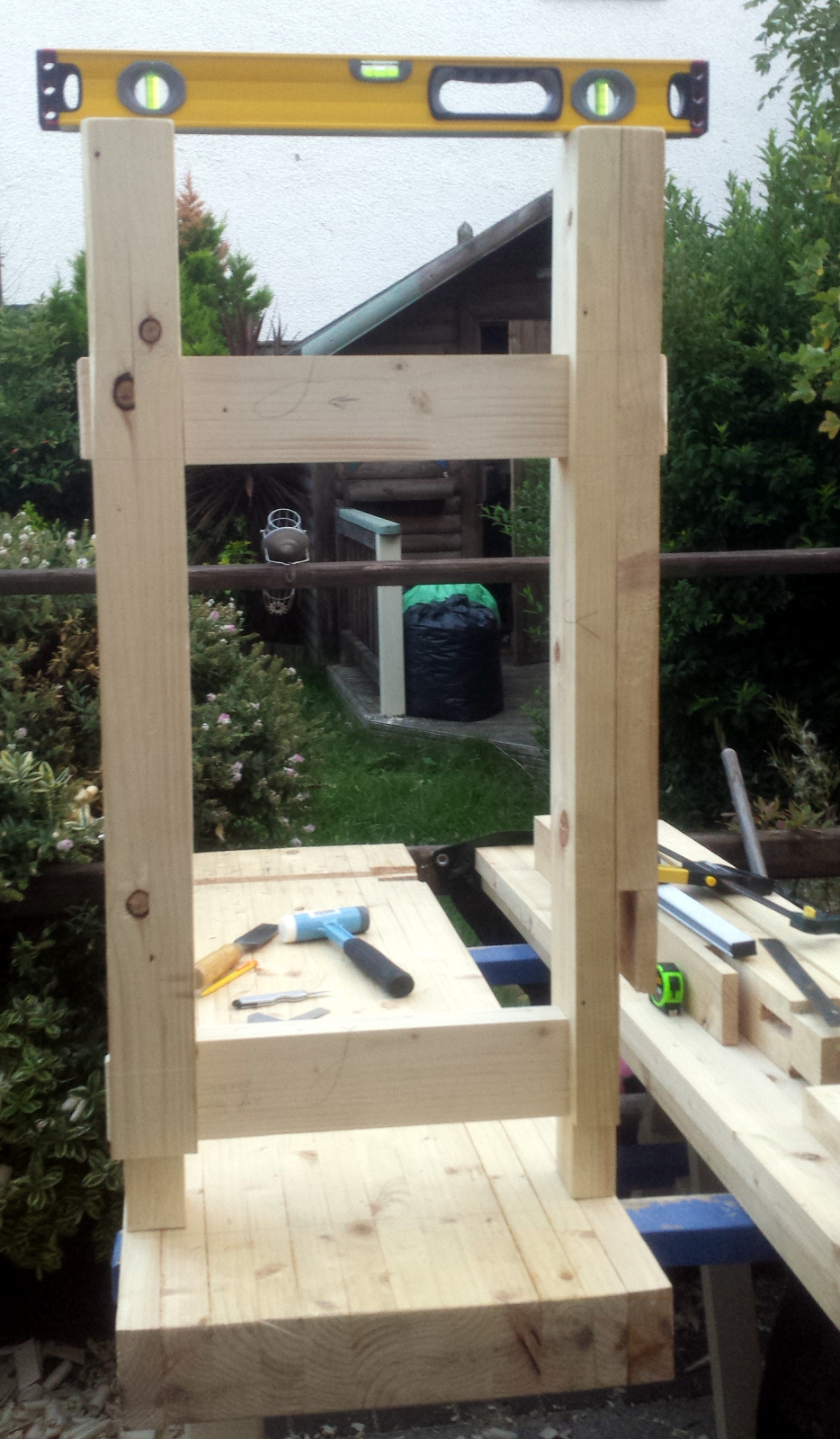 All squared up and level on the spirit level (and they’re level the other way up when standing on the ground too). I marked out for the inner mortices for the leg tenons and then shut down for the night. In the morning I’ll cut the inner mortices (the ones that go right through the benchtop) and that’ll let me mark out the outer mortices (the ones that just go down a half-inch or so to seat the legs) and the connecting dado to accept the top of the top stretcher. Then I might finally get to see the bench free-standing, which would be neat. It’ll still need the long stretchers, the aprons, the vice and planing stop hardware and the mounts and mortices for all that (and I need to go buy lag bolts at some point for the face vice) but I reckon if it freestands reasonably level tomorrow I might just owe myself a beer.