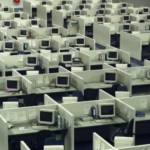 Another point raised recently in a discussion on the boards.ie Development forum (we’ve had a few interesting career-related threads there of late):

When a new graduate is starting out, should they seek out jobs in small startups or large companies?

The very popular answer in the blogosphere/twitosphere/hypecentral is that the smaller startup is the better choice by a country mile, that you have a greater chance of establishing your professional reputation because you’ll have more autonomy, you’ll build more of the products, you’ll work on everything so you’ll gain a wider range of experience faster, you’ll be able to move up the ranks faster, and you’ll get to try new technologies, new techniques, new tools and new shiny things far faster than in a large monolithic company.

Maybe. But I have a different opinion.

As a first job, I’d suggest taking a role in a large company in preference to taking a role in a small one (assuming, of course, that you have the choice!). Yes, in a small company you’ll get to use more tools, take on larger projects and do more design level work.
And you won’t be ready for it and you’ll make a mess of it. Yes, you will. We all did in our first job, that’s why your first job is an entry-level one. No shame in it, you’re learning and it’s expected that you’ll be sloppy in places you didn’t know you had to be neat in, and that you’ll bite off more than you can chew, and that you’ll take on tasks that more experienced people know are doomed and wouldn’t touch with a barge pole. That’s fine. But in a small company, you can wind up being given something important to do that with and the fallout is generally not more training when you inevitably screw up! 😀

In larger companies, you won’t get near design work of any magnitude for a while, but you will be surrounded by experienced people and if you want to learn and grow as a professional, that’s a pretty good environment to do a first job in. Stick it out for a year or two (or even three or four), and then once you’ve knocked off the worst of the rough edges, go for a smaller company or even a startup and use the tools and do the things you couldn’t in the larger company. Not only will you appreciate it more, but you’re likely to screw up less as a result.

Also, remember this is your first job. It’s not just software you need to be learning, but how the workplace itself operates, how to work with other people in teams on large projects (you haven’t met a large project yet, not if you’re a new graduate. The largest thing you’ll have seen in college work doesn’t even begin to approach the largest thing you’ll work on in industry) and other non-technical things that we just don’t teach in college. It’s how to get on with people that you like and people who irritate you to the point where you’d rip the skin off their face with a rabid badger if it’d make them stop talking for five minutes; it’s how to deal with managers and other bosses, both the good ones and the bad ones (and how to tell the difference); it’s how to deal with clients (though you may not see any in a really large company); it’s how the company is an actual business that needs to earn money and how that affects designs and priorities; and most importantly -if you can see it – how the company hires new hands and what they look for and how they decide how much to pay them.

Oh, and if you can learn about when to stick with the job; when not to take the job; and when (and how) to quietly resign and run for the hills – that would be a good thing too, but the odds are that you’ll be a few jobs learning that (that’s just how it goes, you need data points).

You won’t learn much about those things in a four-person startup, no matter how cool the tools or tasks they have. (Well, maybe the bit about running for the hills, or the bit about bad bosses, and you definitely will learn about the dire need for having written contracts for every last little thing; but other than that…)

Mind, you’ll be learning to eat bitter, but that’s part of the first job anywhere; it’s just that a few people in our industry think they never need to learn it (and they’re the poorer for it and they’re fairly easy to spot because they create unnecessary work for those around them). In a larger company, it’s a lot easier to learn to eat bitter (for one thing, the paycheque cushions the blow; for another, there’s usually more support and better trained managers, and less panic).

It’s not very sexy, compared to the startup world’s “f*** you” attitude and generally insufferable behaviour; but if you want to be a professional instead of a “passionate rock star artiste“, it’s probably the better choice to go work for a large company and actually learn your craft – after all, the startup mythos is always saying that college courses can’t teach you to be a great developer; so if you are going to go do the apprenticeship role, you might as well do it at a place where they’ve proven they’re good at what they do… and frankly four lads in a garage somewhere working on the next twitter clone to vanish into the aether taking all their funding with it is not a better place to learn professional practice than a fortune 500 company that’s been around for decades and shows no signs of vanishing just yet!

There was… some dissent regarding this opinion 😀