There are a huge number of lists of new baby essentials – the things you must have at home before baby arrives – out on the net. Most are from the US, a few from the UK and maybe one or two from Ireland (most of which I found on boards.ie). Thing is, these lists tend to be (a) very long and (b) very localised – terminology and products differ between here and the US. I didn’t find a really useful short list of essentials, with the sole exception of one clever list which in its entirity read:

So instead, I read all the lists together, edited out the obviously daft entries, and drafted my own list, deliberately not leaving anything essential to be a gift from anyone (my parents on getting married bought no towels for the house because everyone gave towels as wedding gifts back then; and of course, not one person gave them any towels as gifts). But I did try to be as sane about it as I could given how little data was available.

Today I sat down and looked back at the list and tried to evaluate what was useful and what really wasn’t. Here are my notes; who knows, they might be useful to someone.

The list was huge, we got everything on it bar the receiving blankets, and only the moses basket was a gift and we went asking our friends if anyone had one of those. It was way too much stuff (see the notes) and even at that there were things we missed and had to get after the birth (though to be fair, some things – like the hats – we couldn’t have known ahead of time):

Some of the things on the list, I should point out, we couldn’t possibly have known about ahead of time, like the hats. Other things, like the cot bed, we knew ahead of time weren’t going to be used for months, but because there’s no legally mandated parental leave in Ireland the way there is maternal leave, and I’d only have two weeks of personal leave taken after the birth, we decided to get things well in advance so I could have them ready while Herself wasn’t housebound so she could help choose them. But we had the option to wait and spread the cost if we’d needed it.

Give all of that, what’s the list I’d give to myself from a few months ago to go get ready with?

And lastly, Google and Pubmed are your friends. Consult them often. Holles St. will answer your questions if you call them, and the public health nurses are great and like all nurses are excellent at the practical aspects of medicine; and they’ll give you a load of information, but – they’ll also tell you that the information may conflict with what the doctors tell you, or the antenatal or postnatal classes; and some of the leaflets we were given were…. well, whoever wrote that breastfed babys’ poop doesn’t stink needs to change a nappy and then rewrite their statement in the light of actual data. So read up on what the PHNs are going to tell you so it’s not unfamiliar territory, and so you can ask questions, and so you can understand what they’re talking about a bit better. It’s not about oneupmanship – they’re professionals and Irish nursing standards are actually pretty high despite the shambles that our healthcare system is in – it’s about having a clue about what’s going on. As a parent, that’s your job. Ignorance is something only people who don’t have dependants can afford to suffer from. You don’t have that option anymore.

On the upside, you get to take embarrassingly cute photos of your kids in funny onesies and save them for projection onto a screen during the best man’s speech at their wedding, so swings and roundabouts 😎

This is probably too simple to note, but I’d have liked to have seen this beforehand and didn’t, so – our changing station: 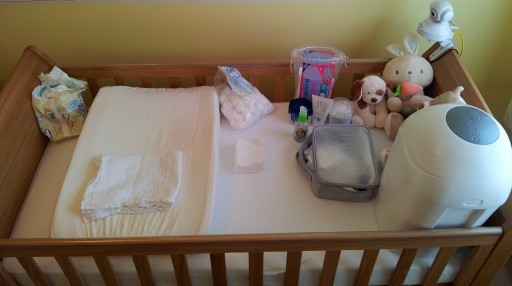 The whole thing is on the cot bed, which has the mattress up at the highest level (and which is still too low – but by the time he moves from moses basket to cot bed in a few weeks, we’ll have had time to sort something out and the changes won’t be as frequent. Maybe ). The cot bed looks fancy btw, but it was a sale in mothercare and was probably overpriced still. It’s meant to last him till he’s around four, but I think it might not be up to it…

Anyway, left to right, we have the fresh nappies on the ‘clean’ side of the changing wedge (which has washable covers). There’s also a muslin on the wedge, just to catch the worst of it if he goes mid-change, which has happened once or twice. There’s a nappy pail on the floor with water and dettol in it – the muslin and cover go in there if soiled, until we get them into a wash.

On the ‘dirty’ side of the wedge, you have:

Not in shot is a small plastic tupperware container with a wide base which we fill with warm water before the change to dip the cotton pads into. No double-dipping (this goes for vaseline too)! Also, if anyone’s ever learnt anything about cooking and food safety, you may notice a lot of parallels between cooking fried chicken and changing nappies. I’m not sure how weird that is yet…

There’s a tallboy out of frame to the right, over the changer’s shoulder and within arm’s reach and there are more bags of nappies, pads and cotton balls on the top of it and more supplies in the top drawer, all within arms reach. There’s another cupboard in the room with yet more supplies, which we use to top up the supplies on the tallboy between changes.

The toys occasionally help distract during the change, but mostly, it’s just somewhere to store them until he’s old enough to find them interesting. The white webcam is our baby monitor, mounted to the cot itself.

Like I said, it’s pretty basic stuff and probably not news to anyone, but what the heck. Anyone see anything useful that’s missing?