In Ireland, we don’t do Barbecue.

I know, we think we do, but we don’t. What we call barbecueing is actually grilling (and what we call grilling is actually broiling). Barbecue is a different animal altogether to virtually anything we do in Irish cooking, and I don’t think I’ve ever even seen proper barbecue on a menu anywhere in the country, let alone being done regularly by people at home. The closest we get is making bacon from pork by cold smoking it. Barbecue is like that, only with hot smoke and it cooks rather than preserves the meat. It originated in the caribbean as a way to cook very tough cuts of goat, and migrated to the US where it’s become something of a religion.

Unfortunately for me, I live in an apartment. So while I know of a good way to build a barbecue pit using a flower pot and an electric hot plate (thank you Alton Brown), I’ve no room to make it. However, there is one traditional barbecue dish that I can fake using a slow cooker: Pulled Pork. Which, again, we don’t really have anything like in Ireland. The closest dish I can think of to it is a sloppy joe, and we don’t seem to do those here either (think hamburger, but with mince soup rather than a firm mince patty). So think of this as a sandwich filling par excellence. It takes a while to cook – this is a three-day-dish – but 99% of that time is just waiting, there’s very little actual work involved here. And it’ll keep in fridge for a week or so – I’m not sure how long exactly because it’s never lasted that long whenever I’ve made it 😀

So to start, a quick philosophical point – barbecue is defined by being poor people food. Same as chilli. Same as osso bucco. Same as coq au vin. Same, in fact, as all the great dishes of all the world’s cuisines (with the exception of some of the fancier Indian curries perhaps, because of the amount of spices they used). In the US where this dish was invented and perfected, it’s cooked in a barbecue pit and they use whole pork shoulders (with the bone in) as their main ingredient, and they’re easy to source because the dish is so popular. Here, if you ask a butcher for Boston Butt, you’re going to get a funny look (the name, by the way, has some fairly murky origins, but the best guess seems to be that the shoulders were preserved – in pre-refrigeration days – in barrels of brine; hence butt, as in barrel, and boston, as in the place). In the great tradition of poor people food therefore, we adapt. In Ireland, Tesco readily sell boned pork leg cuts for a reasonable price, and they have almost as much connective tissue as the shoulder (very important – more on that later), so we’ll use one of those: 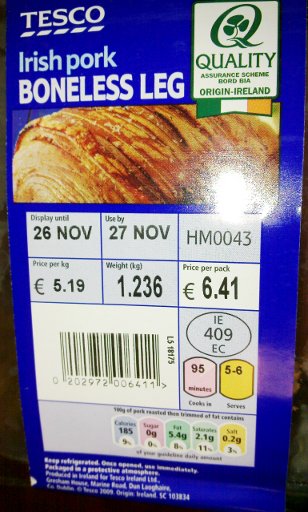 1.2 kg is about right for this recipe, but you don’t have to be too exact. If you go over 1.5 though, you’ll probably need more rub, more liquid and more room in your cooker.

Actually, on the cooker point, some Irish homes now have these for stews and… well, stews. They’re certainly not something I grew up with, so forgive a quick tangential digression. The slow cooker was originally designed in the US to cook beans, a process that needs a long cooking time at a low cooking temperature, which was easy enough when cooking on a campfire (just put your dutch oven – and that’s a topic for another day – a ways from the fire and leave it there all night), but the modern convection oven doesn’t do sub-100C temperatures in a very stable fashion, they’re designed for the 160-220C range really. So the slow cooker (or crock pot as the original was called) was invented. It’s a simple device – a heavy ceramic pot that sits into a holder that has an electrical heating element built into it. It will take whatever liquid is inside it to just under 100C, but won’t ever let it boil, meaning that you can start it off and ignore it for very long periods of time. It’s designed to run unattended all day or all night without being a hazard. It can’t brown meat, of course – it never gets hot enough for that – but it can do some very nice things to any dish that wants long, low, slow cooking (hence the name). Best of all, they’re cheap. The one I’m using here is the cheapest model Argos had available, a 1.5 litre capacity model selling for €15: 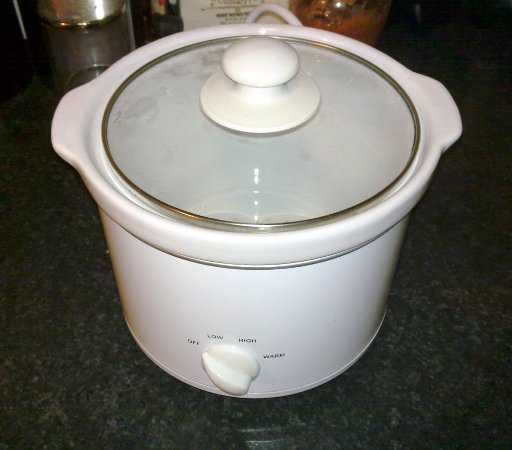 Ignore the pricetag. I know it costs less than some whisks, but this is one of those things where it really doesn’t cost that much to get a good model. For a start, this is small. It’s perfect for one or two people; families may want a 2.5L-3L model, but more than that is just silly. It’s not complex – the switch only needs three of those four settings (off, low and high). And the holder doesn’t need to be very strong structurally, that’s what the pot is for.

Okay, so so far that’s a cuisine we just don’t do in Ireland, using a cut of meat we normally eschew in Ireland, and a cooking vessel that we rarely use in Ireland. Do I get a prize for esoteric choices? 😀

Now, this is a three-day dish as I mentioned earlier. On the first day, we trim the meat and we slap a dry spice rub on it and leave it sit in the fridge overnight to marinate. On the second day, we prep a cooking liquid and put the meat in the pot and start cooking; and on the third day, we pull the cooked meat from the pot, pull it, sauce it and serve it. So I’m going to take those three phases in order. To start, the rub:

Mix all of these together. You don’t *have* to use a mortar and pestle… END_OF_DOCUMENT_TOKEN_TO_BE_REPLACED