Home / e71 / What platform to write mobile apps for?

What platform to write mobile apps for?

A question came up on the boards.ie programming forum a week or so ago about whether to write apps for the iPhone or the Android platform. With Suura, we’ve been looking at what platforms to write clients for (and which to write for first), and it occurs to me that the data on what’s actually going on and what the hype is pushing are monumentally disparate. Believe the hype and the competition is all between Android and WebOS.

Thing is, all that noise is ignoring a few details. First off, both are tiny. In the telecoms market, even the iPhone is a niche player. Take mobile internet usage – yes, it’s growing, and at a rate noone expected, but look at how much of the overall total is made up of phone browsing compared to laptop browsing in these statistics released by Boingo in June this year:

Yes, it’s rising and I’d be surprised if it tailed off tomorrow, but it’s still only a small part of a niche market – don’t forget that the telecoms market is seeing 50% global market penetration at the moment and is looking to improve on that. That’s one mobile phone (of any type) for every two humans on the planet. Unless you’re talking clothes or food, odds are you’ve never even seen a commodity that sells that well, let alone a high-tech one. So the mobile internet is still quite a small part of the overall picture here.

But even setting that dose of perspective aside, and looking only at the niche of the niche, what’s the breakdown of devices? Again looking at Boingo’s statistics reveals an interesting story. Everyone says the iPhone was a gamechanger, but you really have to look at the figures to see how true that is: 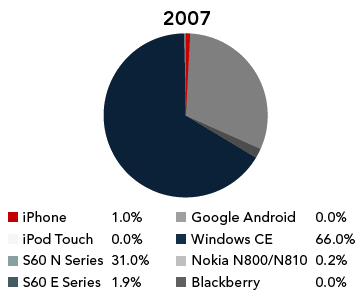 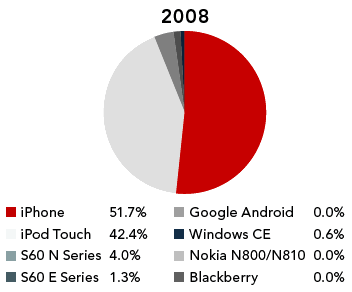 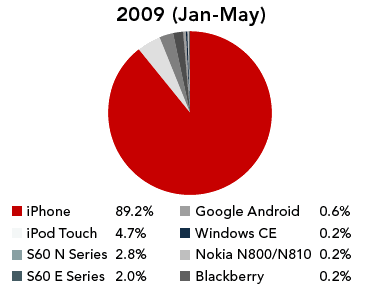 And it’s not just Boingo reporting this, the Q3 data from JiWire tells a similar story:

So the iPhone/iPod Touch has gone from nothing to well over 90% of the US market in the space of two years. That’s phenonomal growth, and nothing’s even close to touching it right now. On the global side of things, it’s not quite so dramatic but that’s more down to inertia and the size of the market than anything else – even in the last six months there’s been significant change according to AdMob’s latest statistics: 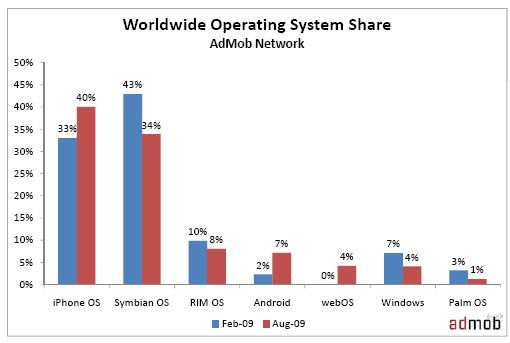 Now granted, all of this also means that something that’s currently nothing could be eating Apple’s lunch in two years time, but I don’t think that’s very likely for two reasons. Firstly, the iPhone really was something new – it didn’t try to be a phone first but to be a communications device first. The “Phone” in “iPhone” is really a misnomer, it’s nowhere near being as primary a function as the name suggests. But “iCom” was already taken:

Secondly, to compete with the iPhone, you’re going to have to have an integrated approach – hardware and software design. That’s not a trivial problem, it’s one of the more hinky embedded system problems around at the moment. Apple are very good at this sort of thing and it takes a fair bit of know-how to be a threat to them. Being a slightly better iPhone is just not going to be enough to compete, especially given the marketshare the iPhone currently enjoys. So for the moment (and the immediately foreseeable future), the platform for anyone looking to sell mobile apps is the iPhone, regardless of the hype surrounding Android, WebOS or Moblin.

Personally, however, I think the “Next Big Thing” isn’t really being talked about much right now. It’s going to be an iCom rather than an iPhone, the looks are going to be important, but more than that it’s going to need some major backing. I think myself that the best looking contender out there right now is the Nokia N900.

Look, everyone thinks Android’s hot because Google is big. But Google isn’t big. Not compared to Nokia. Nokia has a bad day – Finland’s GDP takes a hit. That is what “big” means. And with Nokia dropping the horrible developer experience that S60 development is, and taking on some hefty open source projects like Maemo and Qt to build the N900, and having an app store (Ovi) already running (even if it’s a pain in the fundament to use right now), they have a real shot at eating Apple’s lunch. The only missing piece from the N900, the thing that would have made it a major threat, would have been the inclusion of GAN hardware in the phone (if the operators could offload from 3G to Wifi on the fly with GAN, they’d want the N900 out there with a vengeance). Still though, if you had to seek out the next big thing – I’d be looking at the Maemo platform very hard indeed.