So I turned 33 the other day and for a birthday gift, my parents bought me one of these:

A DeLonghi Lattissima 660 Nespresso coffee machine.
For those who are not coffee purists, these are usually catalogued under “Evil” or “Wrong” 😀
….but when you’re bleary-eyed in the morning….kindof convienent….

In fact, they’re pretty much designed for use by the bleary-eyed early in the morning. Take a coffee pod, lift the machine’s lever, drop in the pod, close the lever, push the button, get coffee. Want Cappachino or Latte? Stick on the foamer attachement, filled with milk, and press a different button. All automatic. And while it’s not as good as the hand-made stuff in a decent coffee shop, it’s not horrible, and it’s better than you’d get in a bad coffee shop. And early in the morning, you don’t care so much 🙂

However, there’s a major, major drawback. Specifically, it’s a Nestle product. Now their (rather heinous) ethical record aside, they’re fairly much dead set against the idea that they’d sell you the machine and then you’d buy the coffee elsewhere; so if you want pods for this thing, you can only buy them via Nespresso. This isn’t a major hassle if you find you adore the taste of one of the nespresso coffee blends, but to be honest, I don’t particularly find any of them incredibly good (“pretty okay” seems to be as far as the tastemeter goes with them) — and more, I don’t like the idea that if they decide the pods aren’t profitable anymore, I get stuck with a machine I can’t use.

So I was rather happy when I noticed a post in the Boards.ie coffee forum describing the NexPod, which is a third party pod for the Nespresso machines:

for those who like their own blends and a fresh grind, but who also like the convenience of a nespresso machine, these are now available: http://www.nexpod.com/

Excellent, I thought, and looked them up. €20 for 80 pods and filters, including delivery. Excellent, I thought again, and ordered some immediately. One of the purists didn’t think I’d be saving a lot of money (the pods work out cheaper than the nestle pods, but that’s before you count the cost of the coffee), however as I said at the time:

Dude, if it was about saving money, I’d drink tap water.
I wouldn’t have gotten the machine myself, but my folks though it was a good birthday present and in the morning when I’m bleary-eyed, it is. I’ll just put better coffee in the pods is all.

Besides, I dislike shopping in Brown Thomas. I keep wanting to grab someone, slap them about the face and yell “YOU DO NOT PAY A THOUSAND EUROS FOR A COAT THAT LOOKS LIKE IT WAS MADE BY A BLIND TAILOR’S APPRENTICE YOU IDIOT!”. I’m getting worried that one day my self-control will slip and next thing you know, I’ll make the evening news…

A few days go by, and then yesterday, the Nexpods arrived. Three or four days, over a weekend. Not too bad, so that’s a point for logistical availability right there.

I started by filling one up half-way, stuck in the filter, put it in the machine, closed the lever. Noticed the lever wasn’t closing as easily as normal. Hmmm.
Hit the button. Cue regular noises… and then louder noises… and then mild panic at the thought of burst pressure vessels… and then a stream of pure water instead of coffee from the spigot… and then hitting the button and opening the lever to take a peek.
The NexPod was crushed flat. Mangled. Normally the pods are relatively intact after making coffee. Hmmm. Maybe I underfilled it. Okay, user error, try again. This time taking photos!

They don’t look quite as sturdy as the Nespresso pods, and they don’t feel that sturdy either. Hence the mashing flat on the first attempt. Comparing them side by side, you can see they also have slightly different designs: 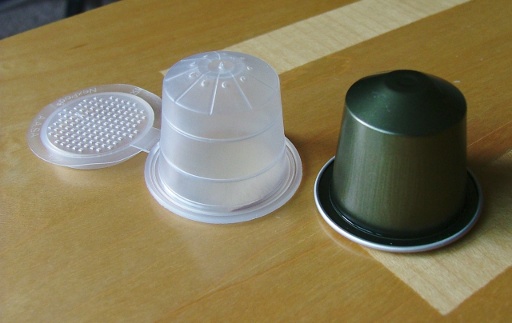 But okay. Fill it up (slightly messy job this): 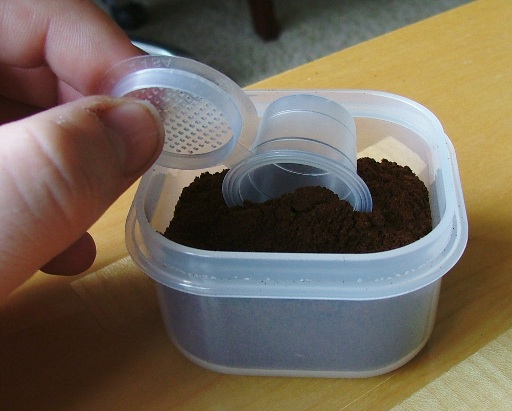 Then tamp it down, top it up and tamp again and sweep off the excess. Gloriously messy, this bit – the advice to do it in the coffee grounds bag is good advice, but doing it over the open container works well also. Just don’t be enthusiastic 😀 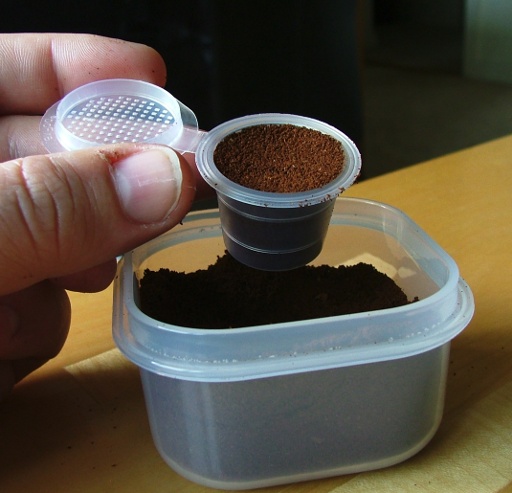 Now insert the filter paper into the lid, which is a bit fiddly; 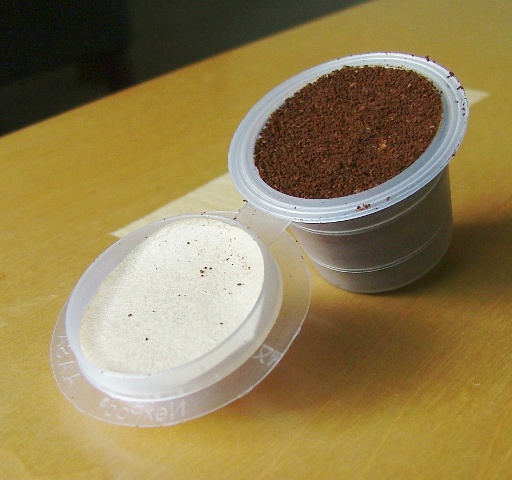 And then close the lid. This bit’s downright awkward, the lid doesn’t want to close and then it snaps shut suddenly, but you can wind up covered in coffee if it goes sideways. 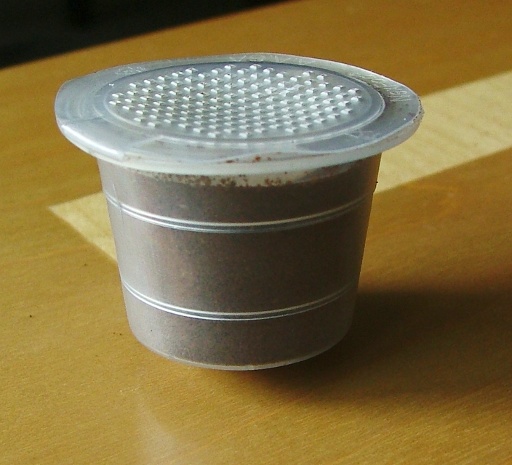 Even when it’s relatively clean, it’s not perfect – you can see there that the lid isn’t sitting down perfectly all the way around, and that’s down to the lid design, not user error. And the flimsiness of the pods is a bad thing here also – the effort of closing the lid can cause damage to the pod at the rear: 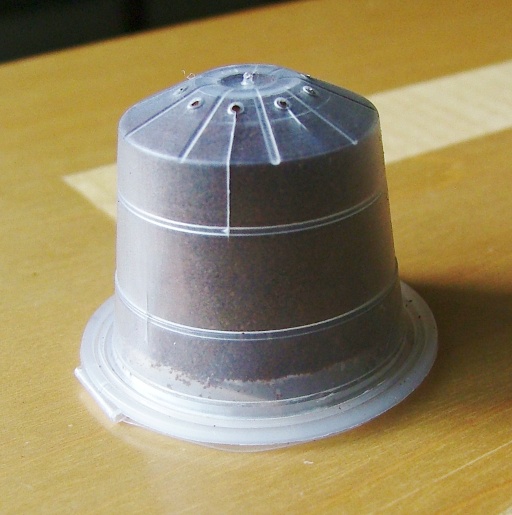 Closing the lid caused that large split and the smaller one to the right. You have to wonder if the whole thing might not pop open on you when you’re trying to close it…

Anyway, at this point, it’s off to Larry.

Okay, so first the control run with a Nespresso pod. Again, the operation of the machine’s simple. Open the lever: 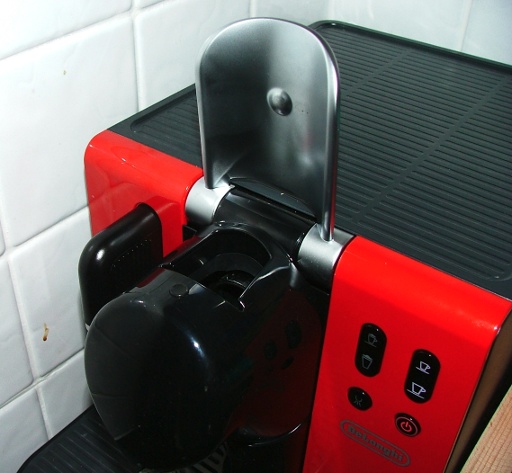 Then drop in the pod into the slot: 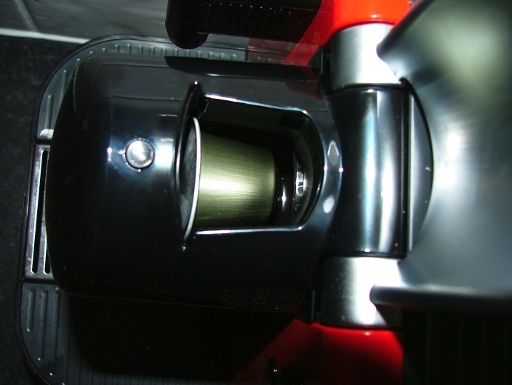 And close the lever. Just a quick point to note here – as you close the lever, a piston-tube-thingy is extended out to meet the pod and hold it into the correct place and feed the steam to it, like so: 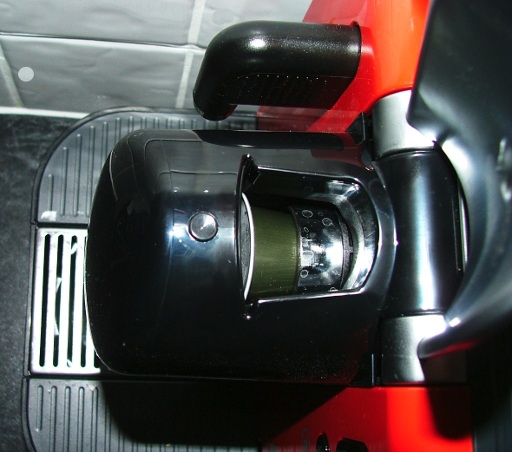 (That’s just as it starts to close – the sleeve of the P-T-T then covers the sides of the pod completely and holds it in place as you close the lever fully).

I digress to note this point for a reason, more on that in a minute. Once the lever is closed, you push the espresso button, the machine chugs away and put pours a reasonable espresso. Open the lever again when it’s done and the pod drops down into a tray for later easy disposal.

Okay, so much for the control run. Now for the NexPod. Open the lever, drop in the pod: 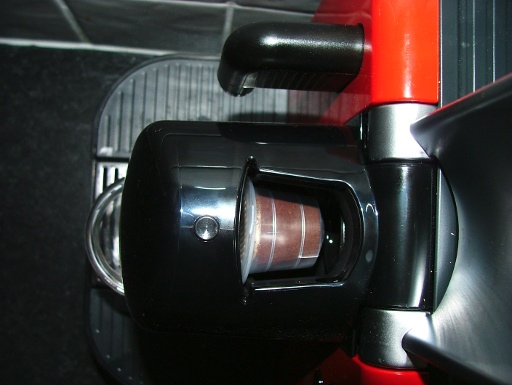 Now here’s the thing. One time in three, it works like that. One time in three it falls right through to the disposal tray. And the rest of the time, it hangs up somewhere it shouldn’t along that path. The different mechanical design causes a bit of fiddliness here. Not a great thing at bleary-o-clock in the morning. I think what happened the first time I tried this was that the P-T-T caught the edge of the NexPod and crushed it flat. So this time, I’m careful to ensure the pod and the P-T-T engage properly, which necessitates removing the disposal tray and reaching up from underneath, but eventually: 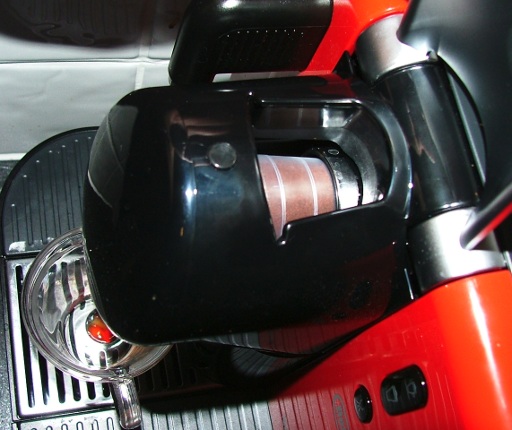 There, seated. Now close the lever. If you can. In fact, it’s much, much harder to do – the mechanical design differences translate to a lot more force being needed to close the lever. And in fact, while you do that, the pod doesn’t line up with the sleeve of the P-T-T, it goes off to one side and gets crushed. So you give up on the lever, you get the pod aligned by fiddling with it, and then you shove the pod home in the sleeve with your finger like so: 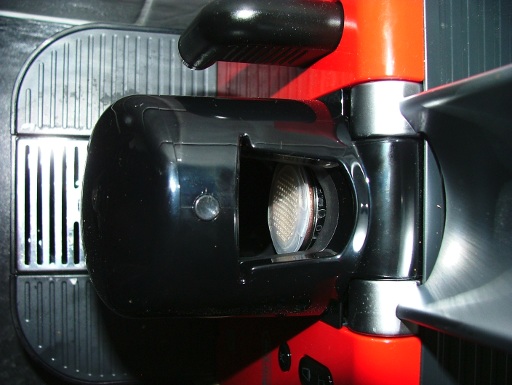 And then you close the lever, and hit the button. And you get the normal noises the machine makes. And then slightly louder normal noises. And then yay! Coffee! Cool. Open lever to dump pod… nothing. Hm. Lever opens, but no pod in tray. Hmmmm. Look inside, nexpod is still stuck inside the P-T-T: 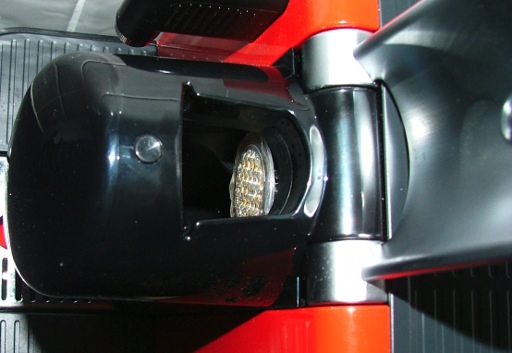 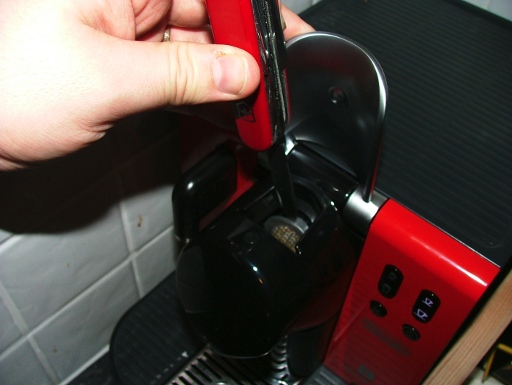 Gah. But okay, how’s the coffee? How did the results of all this palaver compare?

The coffee itself tastes as good from one as from the other. Same end result, more mess and fuss with the NexPod. Now NexPod do say they intend this for a single use only, but some have said you can clean the pod, replace the coffee and filter and reuse it, and NexPod agree that this can work, at least some of the time. I dunno – the damage done to the pods by the brewing process is quite significant: 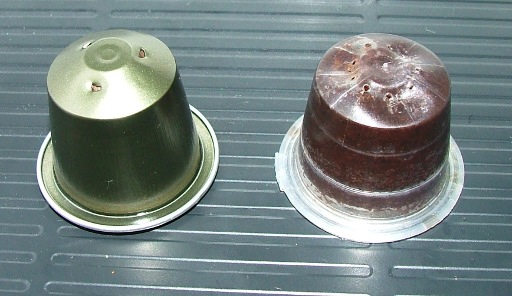 I don’t think they’re going to be reusable at all. You can, of course, clean them out and recycle them, and a lot easier than the Nespresso pods which you have to send off to be recycled — but then, this is Ireland and our idea of recycling seems to consist of collecting recyclables in seperate bins and then burying them in different coloured bags in the same landfill.

So overall? Well, yes, they do work, and the coffee is perfectly fine; but unless I’m doing something awfully wrong, they’re not as good as the nescafe pods. I think it’s down to the sidewall construction – they’re definitely more flimsy than the nescafe pod’s sidewall, and I think they flex too much when you close the lever, so stuff doesn’t align well as a result.

Seems, by the way, that others agree on this: