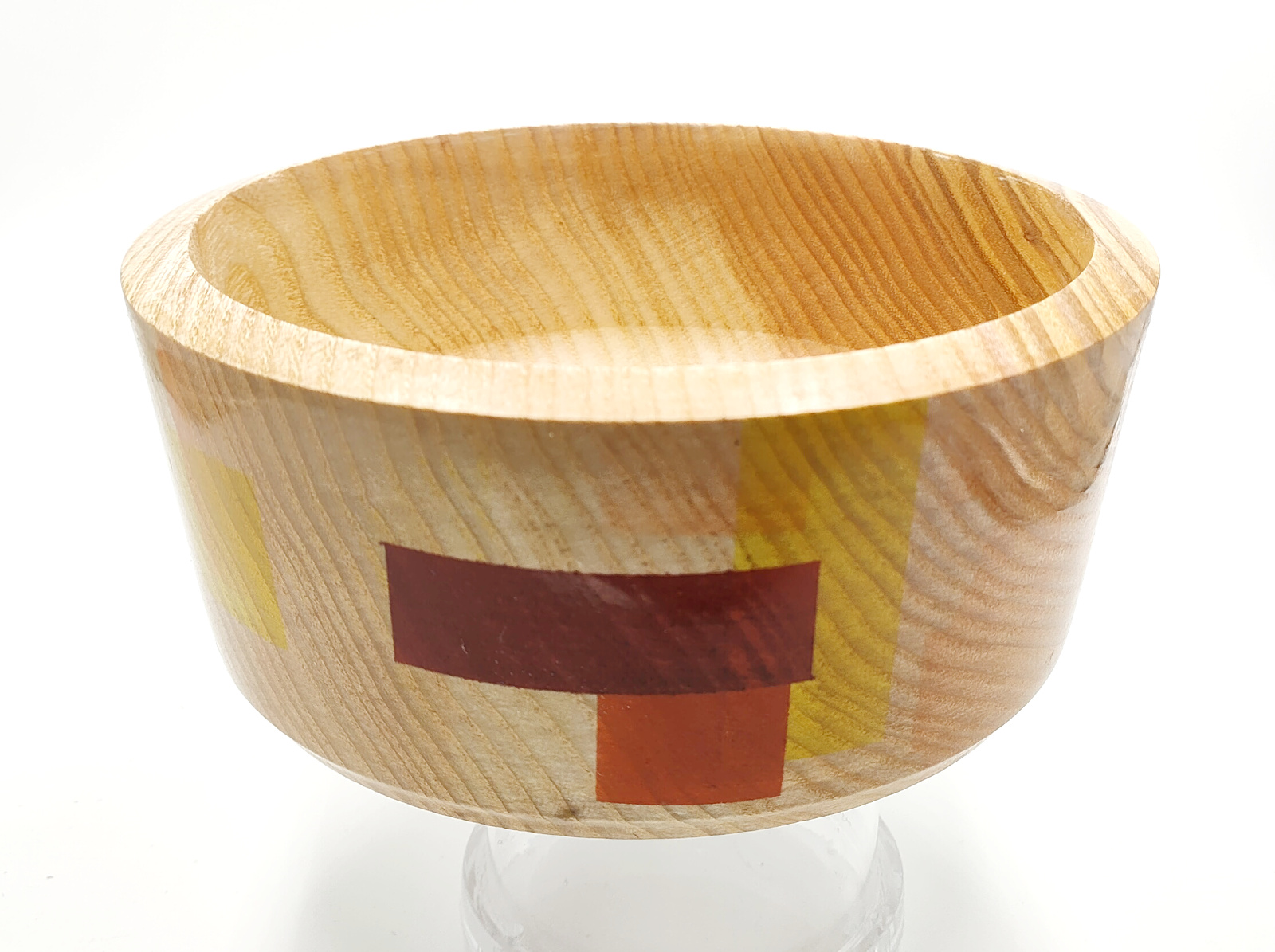 A while ago, Stewart Furini was playing around with colouring a wooden bowl in a neoplastic fashion (think Mondrain) using paints and stains. It looked like fun so I thought I’d give it a try.

Turns out, it’s a little harder than it looks. I started with a miniature bowl blank because it was the first thing to hand.

Very simple shape (the idea was to part off at that thin line about an inch in from the chuck jaws so the proportions of the final cup wouldn’t be horrible). The colouring should be simple – airbrush with the lightest colour, then mask off squares with masking tape and airbrush successively darker hues and finish off with black lines on top (you’d do it the other way round with paints, in the same way that the order you paint with oils is the opposite order to that for watercolours). And obviously, because we’re not limited to the three primary colours this isn’t really neoplasticism, but roll with it, I’m just having fun 🙂

Two quick problems – firstly on such a small piece the curvature on the surface is fairly tight and you might not know this but 2D geometry on a curved surface is non-euclidean (eg. the three angles in a triangle on such a surface do not add up to 180° but to more than that) – which means that masking off perfect squares gets a little weird when the square is large compared to the radius of curvature. But okay, I can just squint and ignore that.

The second problem was a doozy. Turns out, masking off spirit stain on a surface with cheap lidl masking tape is a non-runner. Does not work at all, and the darker stains for some reason show that up the most.

Bleuch. But I had some fancy frog tape, which is supposed to be the best thing ever for masking for painting.

Nope. Still no dice. I actually gave up on this blank at this point and just sprayed it with ebonising lacuqer and thought I’d just make a little cup from it with the red/black urushi colouring scheme and come back to the neoplastic colouring later on.

Yikes. Good news is, the faceplate still works. I still haven’t found the missing third of the piece though, it rattled off my head and went flying somewhere in the shed and has resisted attempts to be found since.

So if the small piece bounces off your head, the first thing to do is try again with something much heavier 😀

Stocked in any model making shop near you. I couldn’t recommend it for housepainting unless you’re a millionaire, but for this sort of thing, it’s just astonishingly good.

Unfortunately, it isn’t perfect and there are things you have to do when using it.

So first off, whatever was in the black chestnut spirit stain, it just ignores tape entirely. No matter the tape, no matter how I burnished it, it wasn’t staying in its lane for anything. So I just didn’t use it after this (I turned off the surface on this bowl about four times trying to get it right).

Also, if you’re masking off a square with the tape, you’ll have vertical sides and horizontal sides and one of those is going to be going down over the other. You have to burnish both sides heavily, but you have to pay special attention to the point where the top layer of tape meets the bottom layer of paint. You have to burnish that like it owed you money, because if you don’t, you leave a very small gap where the horizontal line meets the vertical line and the tape has to rise up off the wood to layer over the vertical line’s tape; and the spirit stain will wick into that gap through capillary action and spread waaaaay further than it has any right to and you’ll have to turn off the surface of the bowl and start over again.

And do I even need to mention that you have to airbrush from a ways back, use light coats and take time to build up the colour you want because if you get too close to the surface the air will blow the stain into any little gap to get out from the tape otherwise?

However, with enough time spent burnishing, and some care airbrushing you can get nice results.

It’s still not perfect, but I like the effect. I might come back and use it for something else in the future. I also liked the simple shape and the foot that I got on this bowl, I must try to do that again but better.