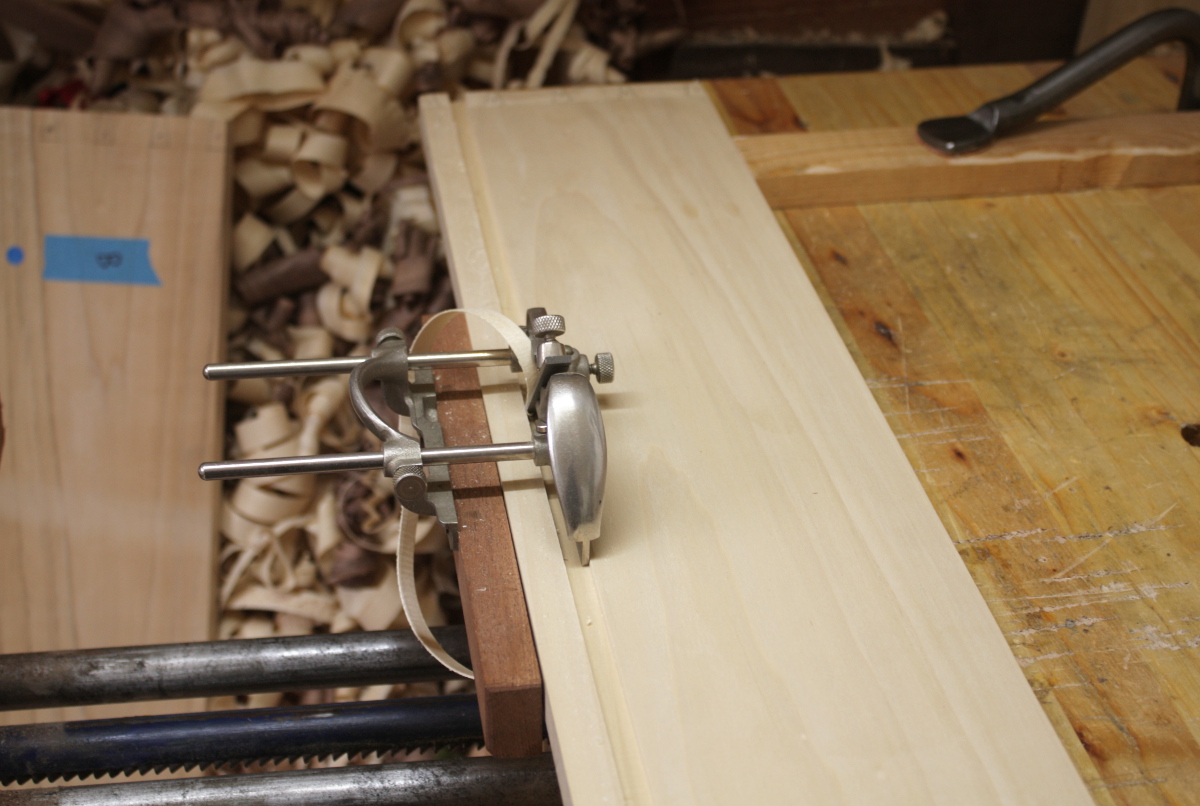 The idea was to get the last bits done today. Didn’t quite make it, but came close.

Got the cot out of the shed first so I could do some work. Looks nice in the sunshine… 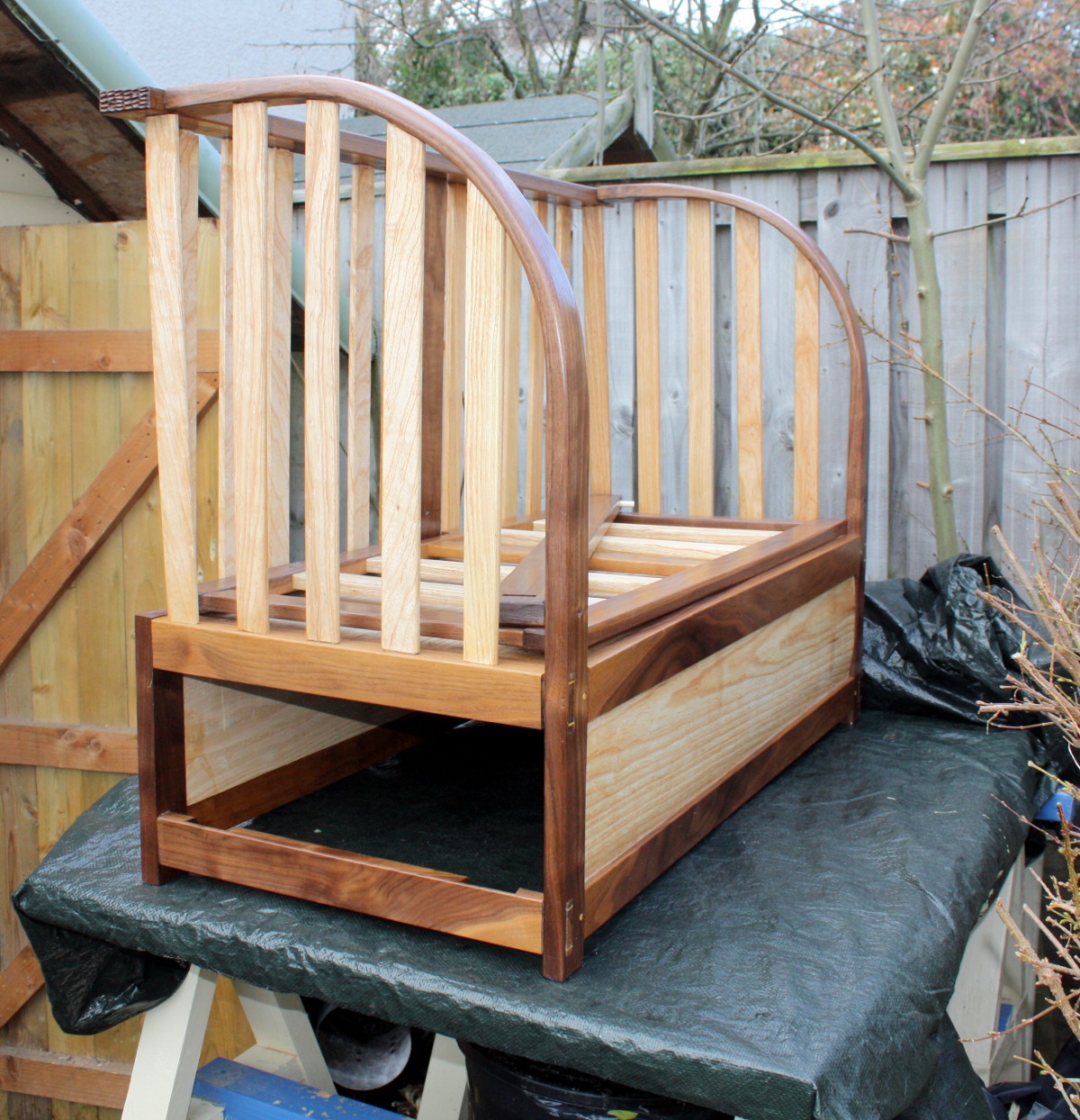 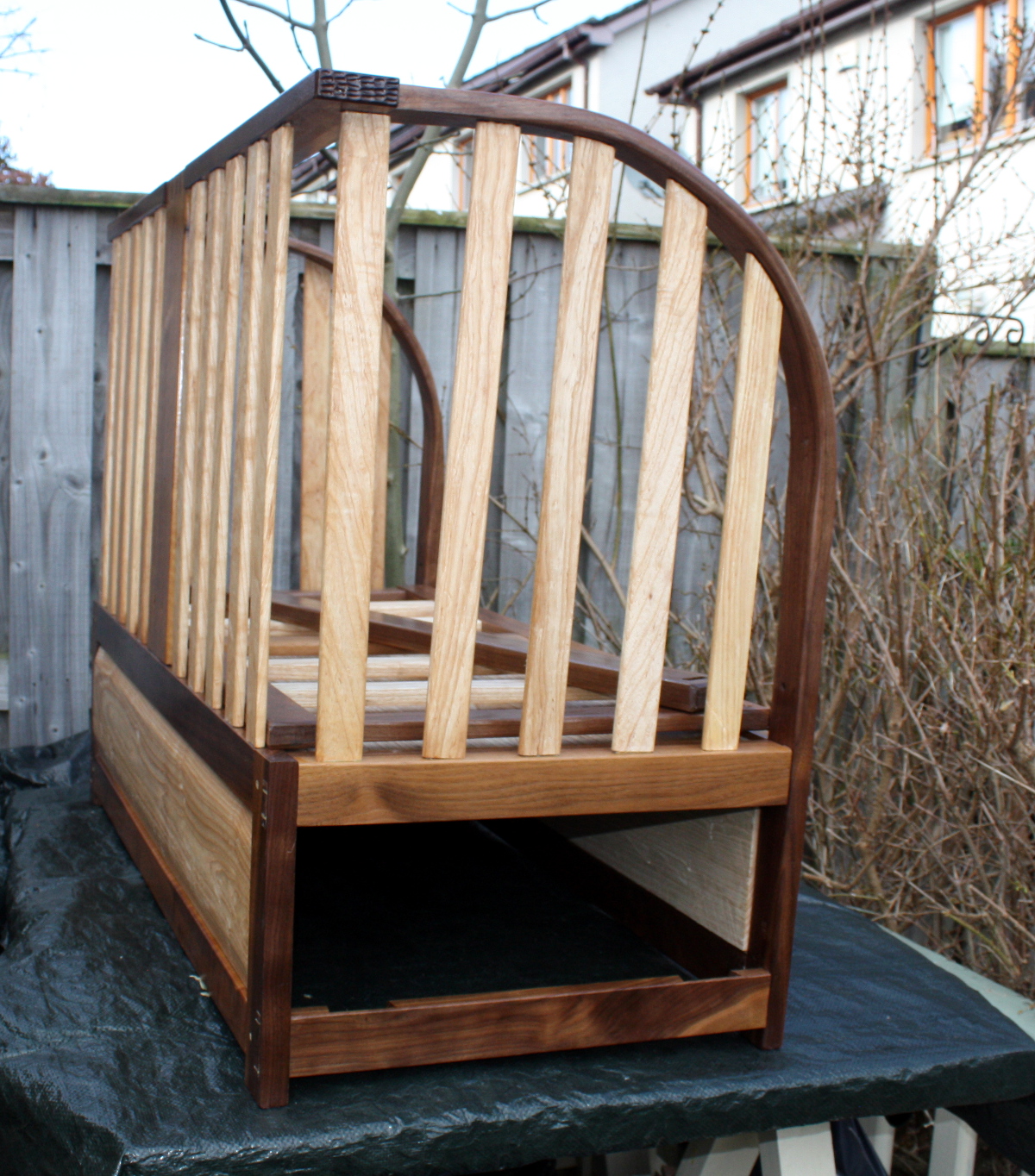 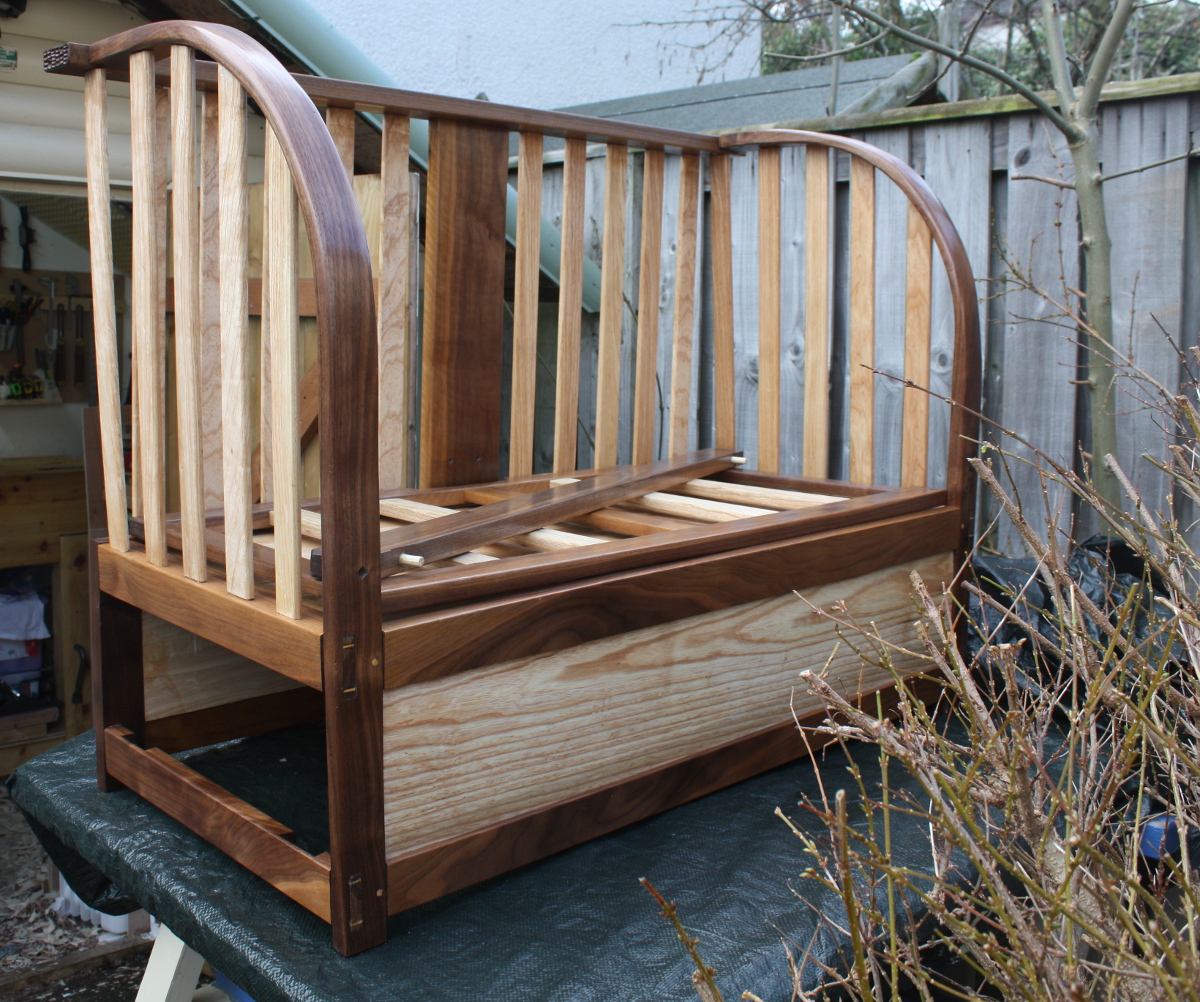 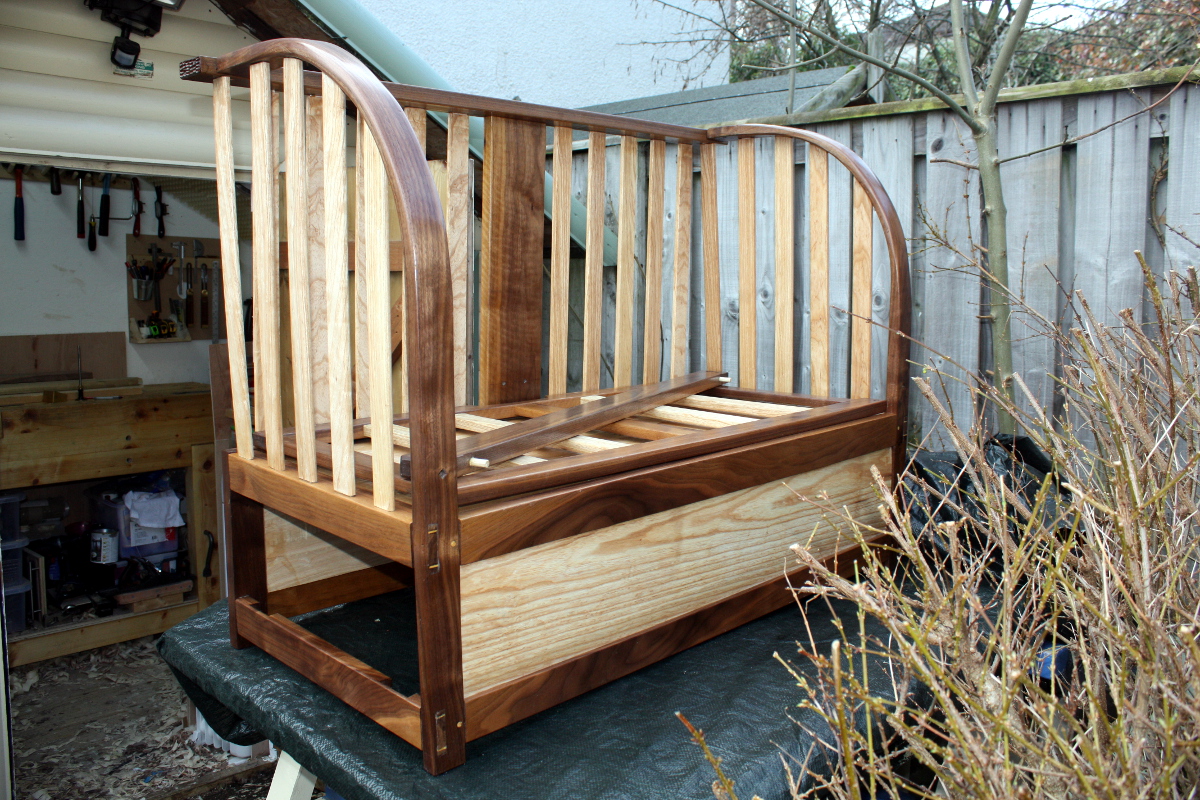 Then made up the glue blocks I was thinking about yesterday to support the top panel. 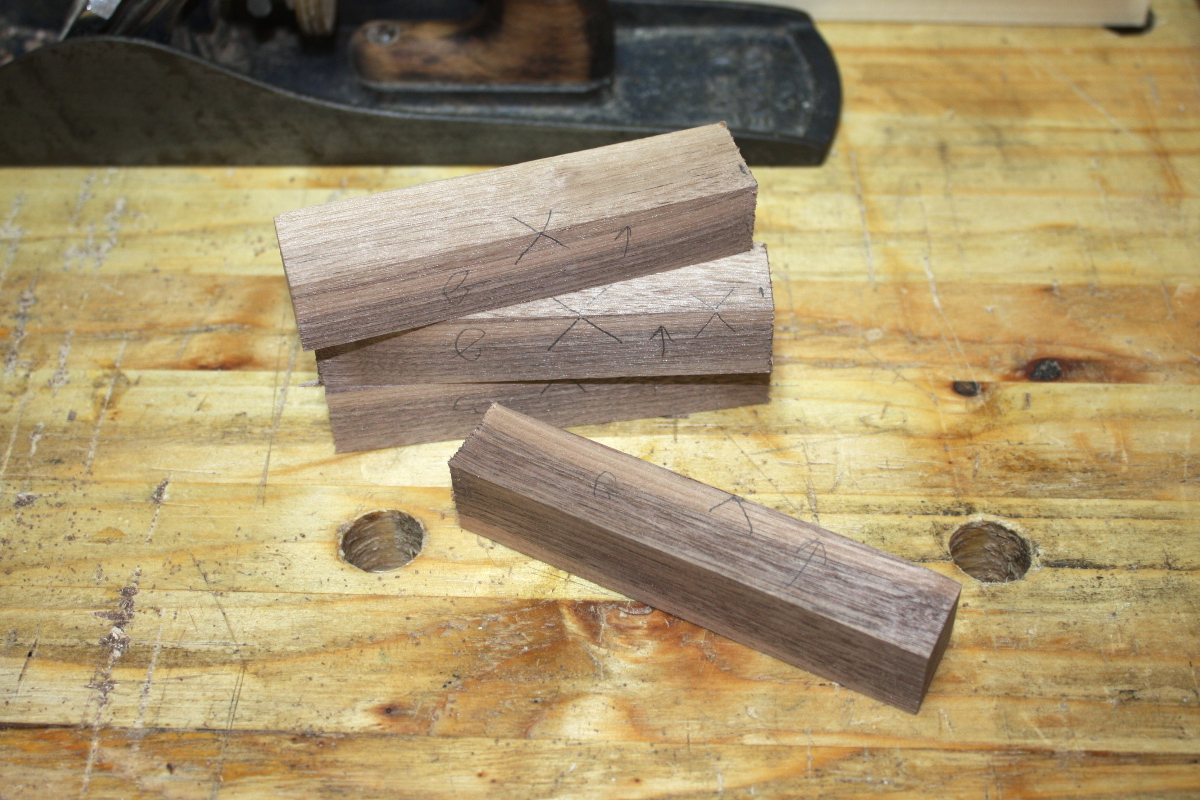 And then gathered all the tools up…

The #778 is there to cut a small alignment rebate on the inside of the tails for the dovetails, in what Rob Cosman refers to as the “140 trick”. I don’t have a Stanley #140 (it’s a rather expensive skew-blade block plane) and the #778 is a little finicky for this, but it works if you’re careful. The idea is that you cut a tiny little ledge in the tailboard and after the tails are cut you sit the pinboard up against the tails and on that ledge to align it and let you mark the pins more easily (and it works quite well).

That’s the four boards laid out to check for any obvious weird whoopsies. The coloured dots are a David Barron trick to keep track of the pin and tail boards for each corners so I don’t accidentally cut the tails for one corner and mark off for the pins of a different corner and bugger everything up. 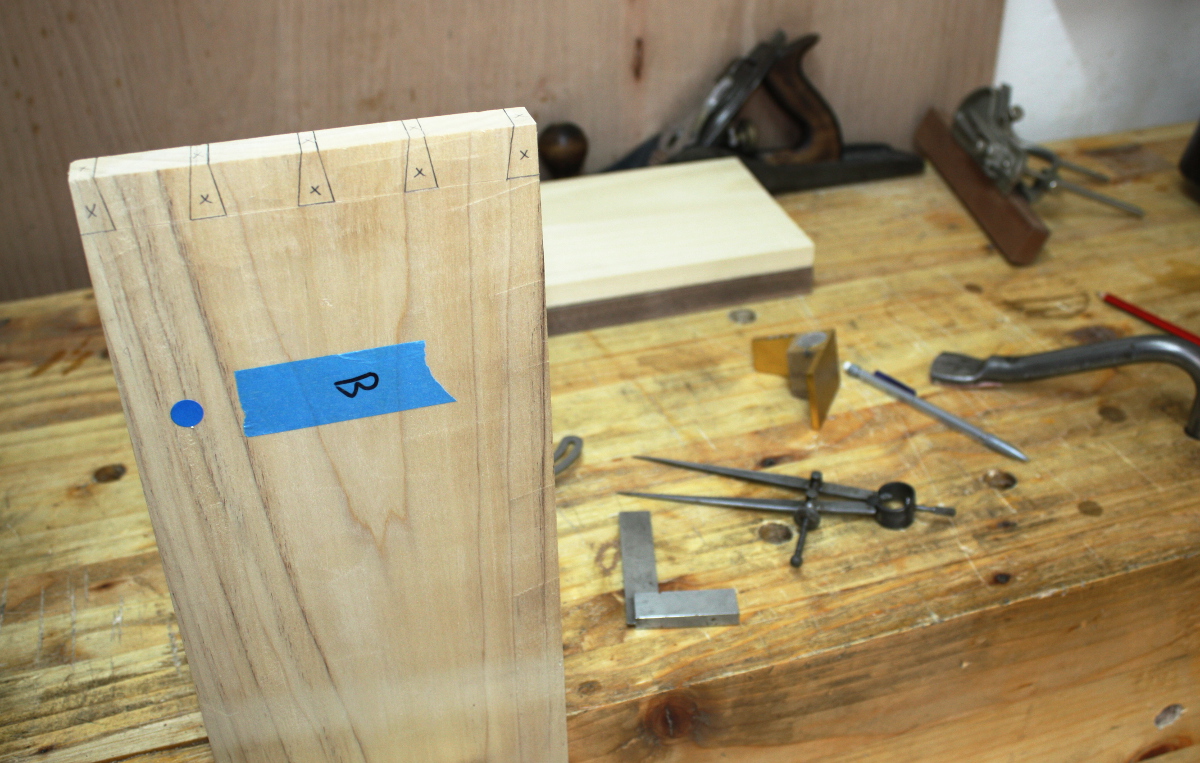 Laid out using dividers (I use one dividers for the shoulder pins and then the other dividers to lay out the tails) and the David Barron dovetail guide.

Cut out the groove for the plywood base with a #043 plough, which is pretty much what happens when you take the unix philosophy of making tools that do just one thing but do it very well and then apply it to woodworking tools. It’s not much use for anything other than cutting this one groove, for drawer bottoms, but it’s probably the best tool out there to do the job.

Haven’t cut the tails yet here (but did lay them out) in order to put the groove in the middle of the bottom tail. 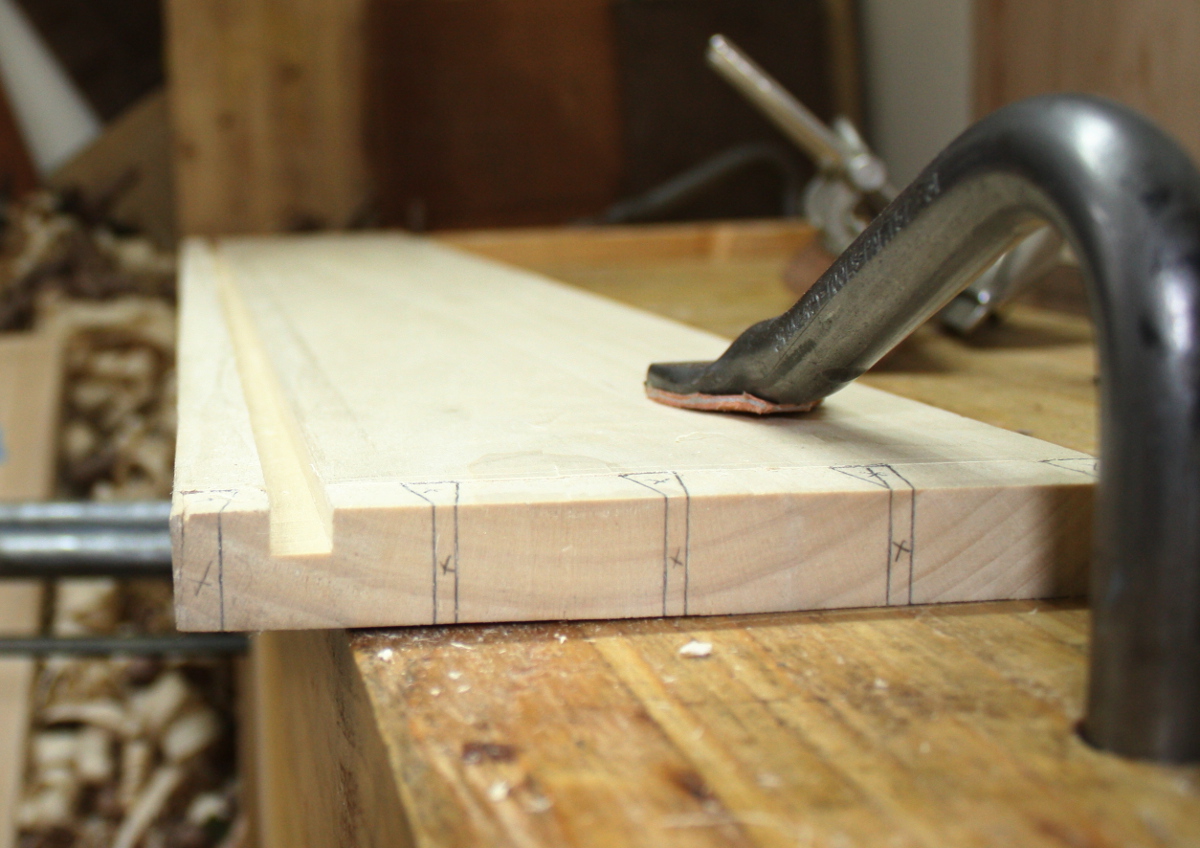 See what I mean? For any other groove, it’s not a great tool (which is why you have plough planes like the #044), but for this one, it’s just fantastic. 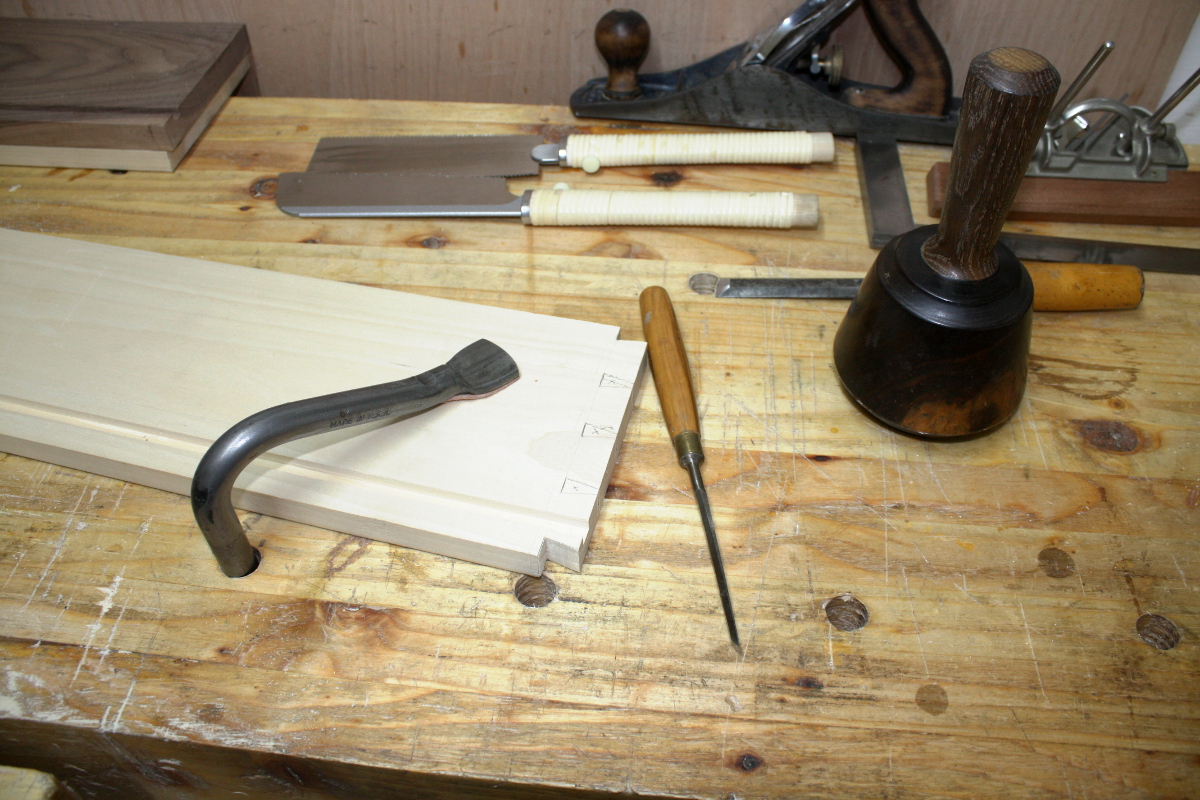 Sawed out the tails with the ryoba and the David Barron guide, then chopped out the waste with a ¼” chisel. 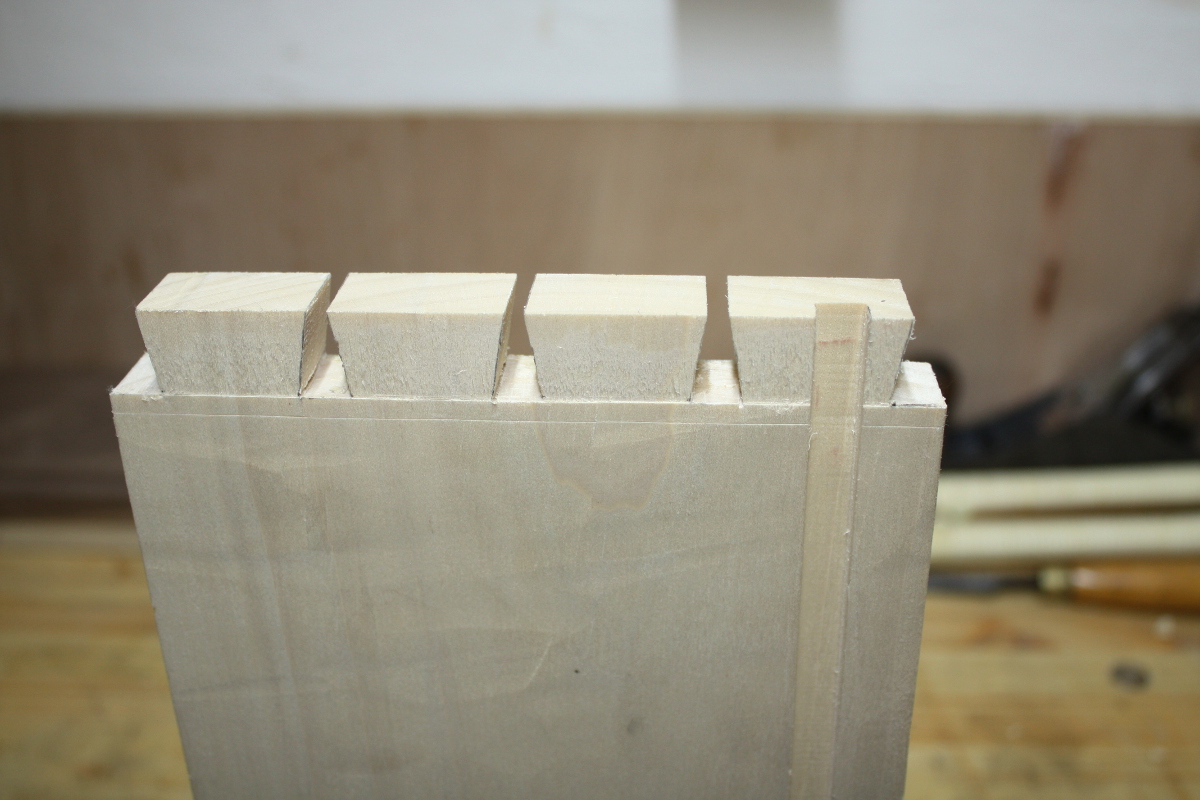 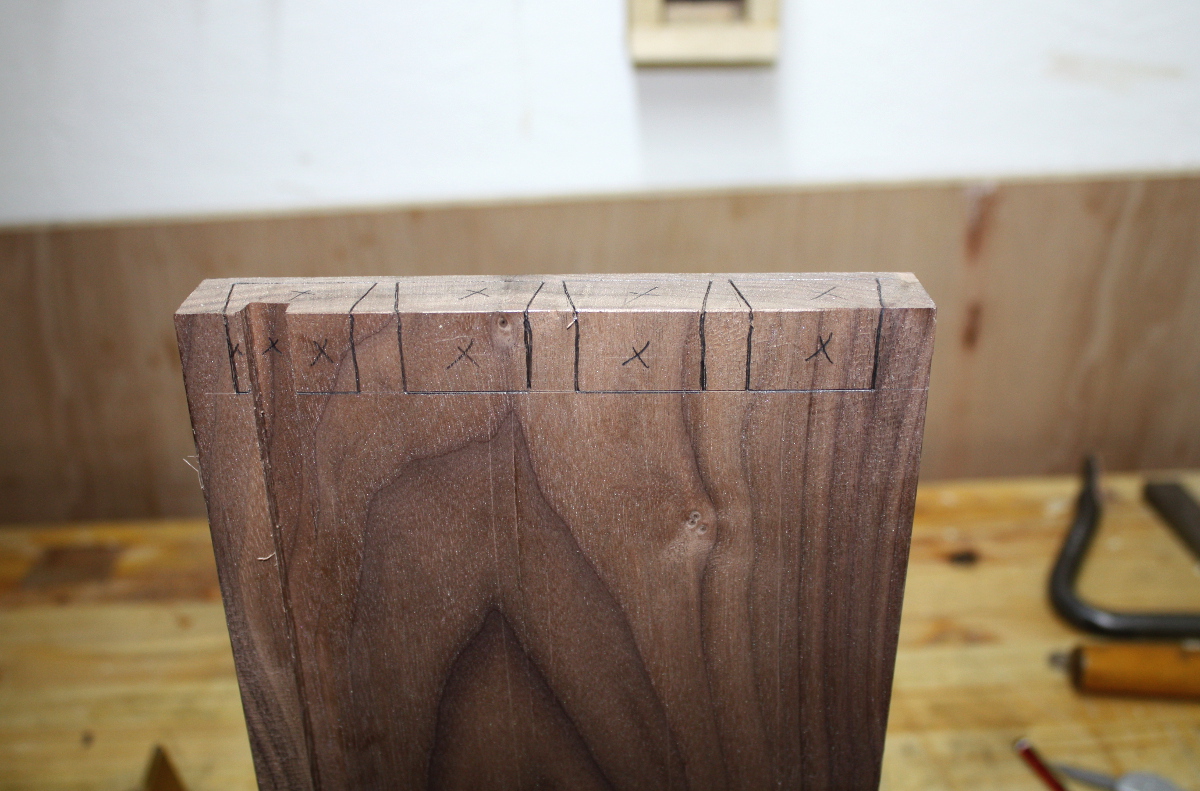 On to the half-blind dovetails for the drawer front. Marked it off against the tailboard, reinforced the knife marks, highlighted with pencil, marked the waste and sawed down the diagonal with the Barron guide and the ryoba. 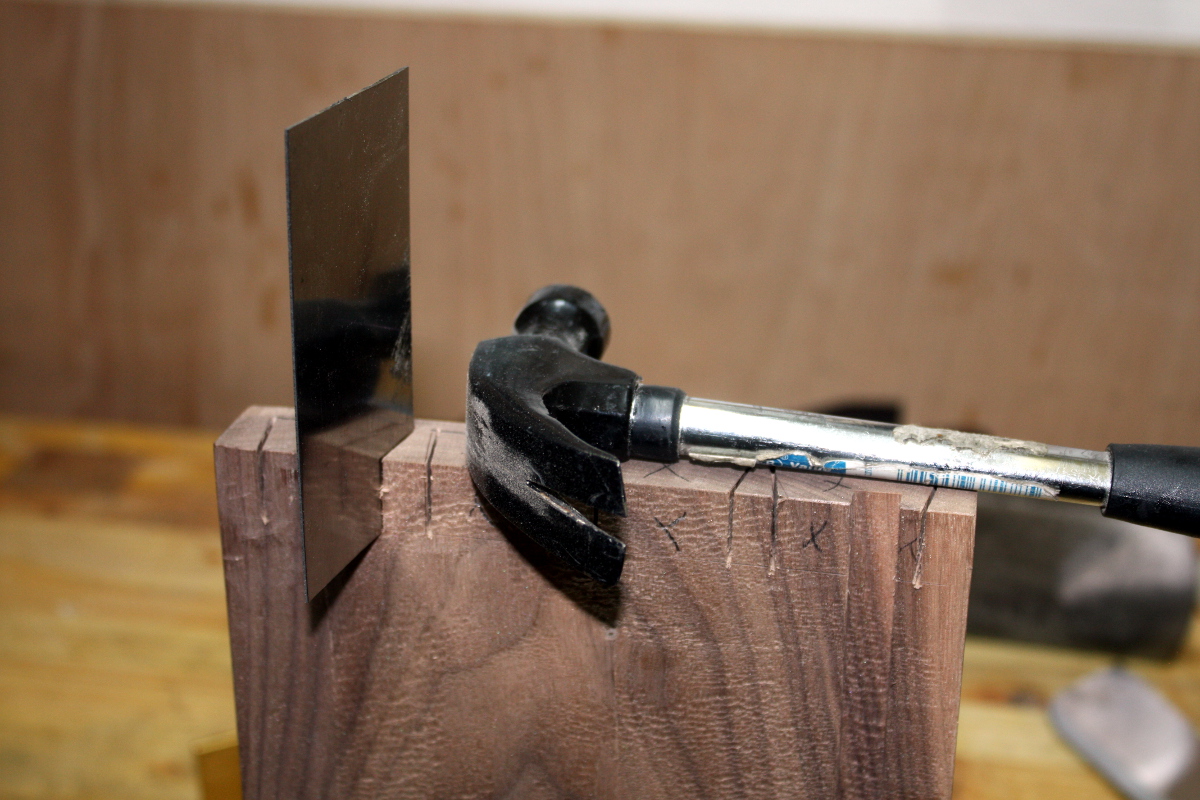 Then took another trick I heard from Cosman’s youtube channel and smashed down the fibres on the remainder of the diagonal using a piece of metal with the same width as the saw kerf (in this case, a spare card scraper). This means I now have both sides of the cavity cut out fully and that makes it easier to chop out the waste. 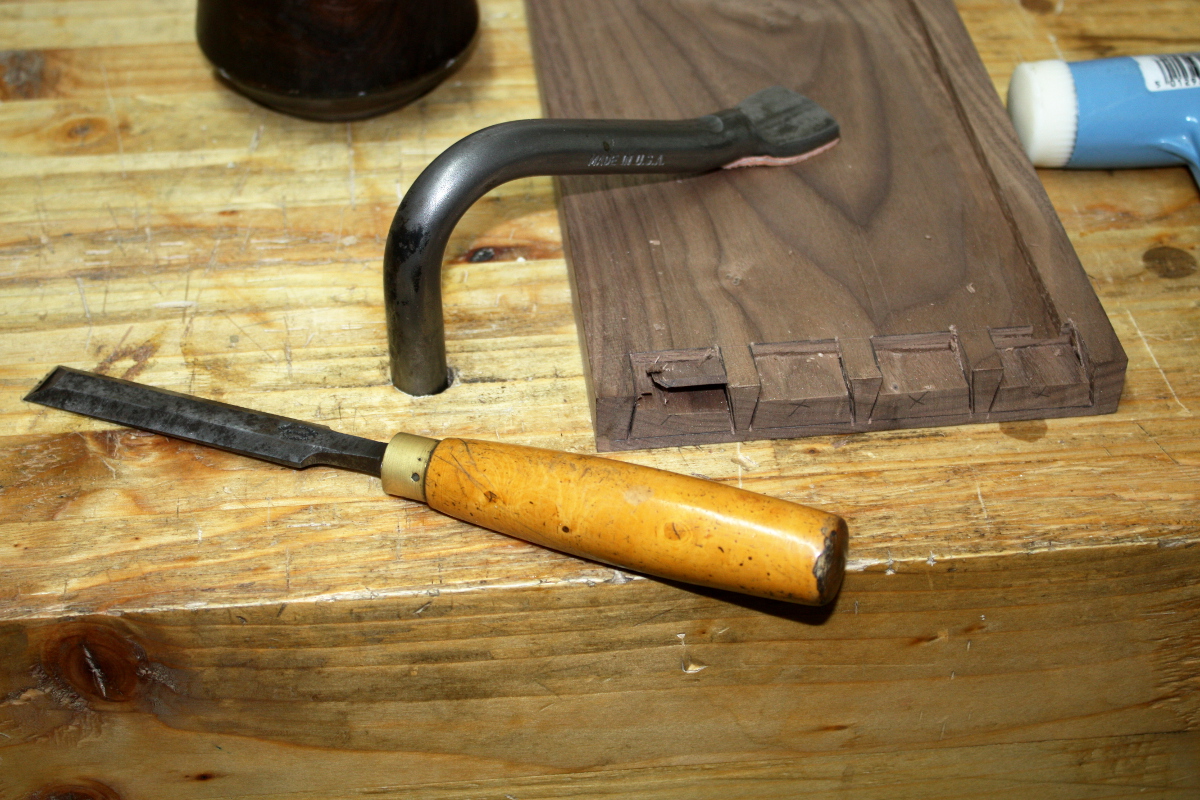 For the last few mm I put the board upright in the vice and pare, rather than chopping. 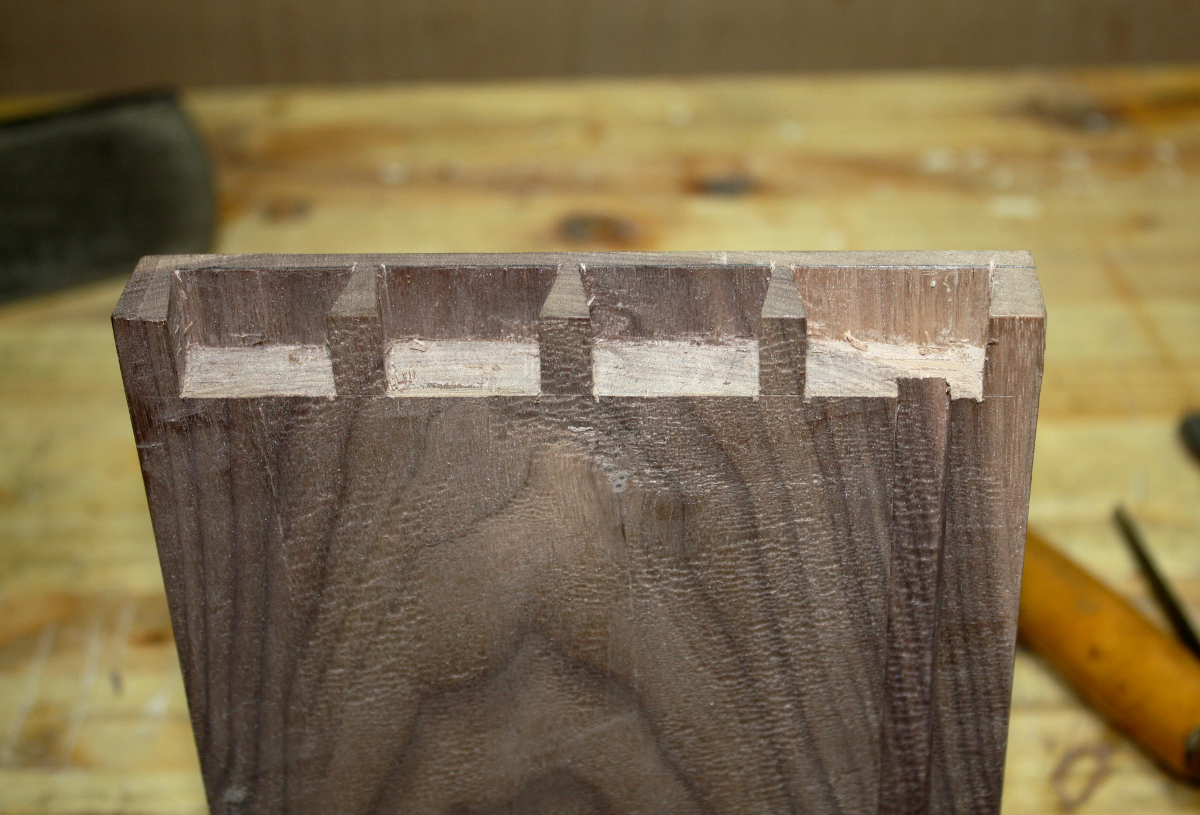 By the way, Walnut. Wow, is this so much easier in this wood than in pine. If you want to learn to do this, don’t try it in pine. I mean, don’t learn in walnut either, it’s way too expensive for that, but try it in a hardwood like poplar. It’s so much easier than in softwoods.

I’ve left out the amusing bit where I fit the plywood base, trim it to size by carefully measuring it and double checking the measurements and then somehow managing to cut it a full inch too short anyway and having to bodge up a fix. And the fun part where during the glue-up I found that the plywood base was still too wide by a few mm and I had to disassemble it, plane down the base to width, and complete the glue-up. Thank goodness for hide glue’s long open time, that’s all I’m saying… 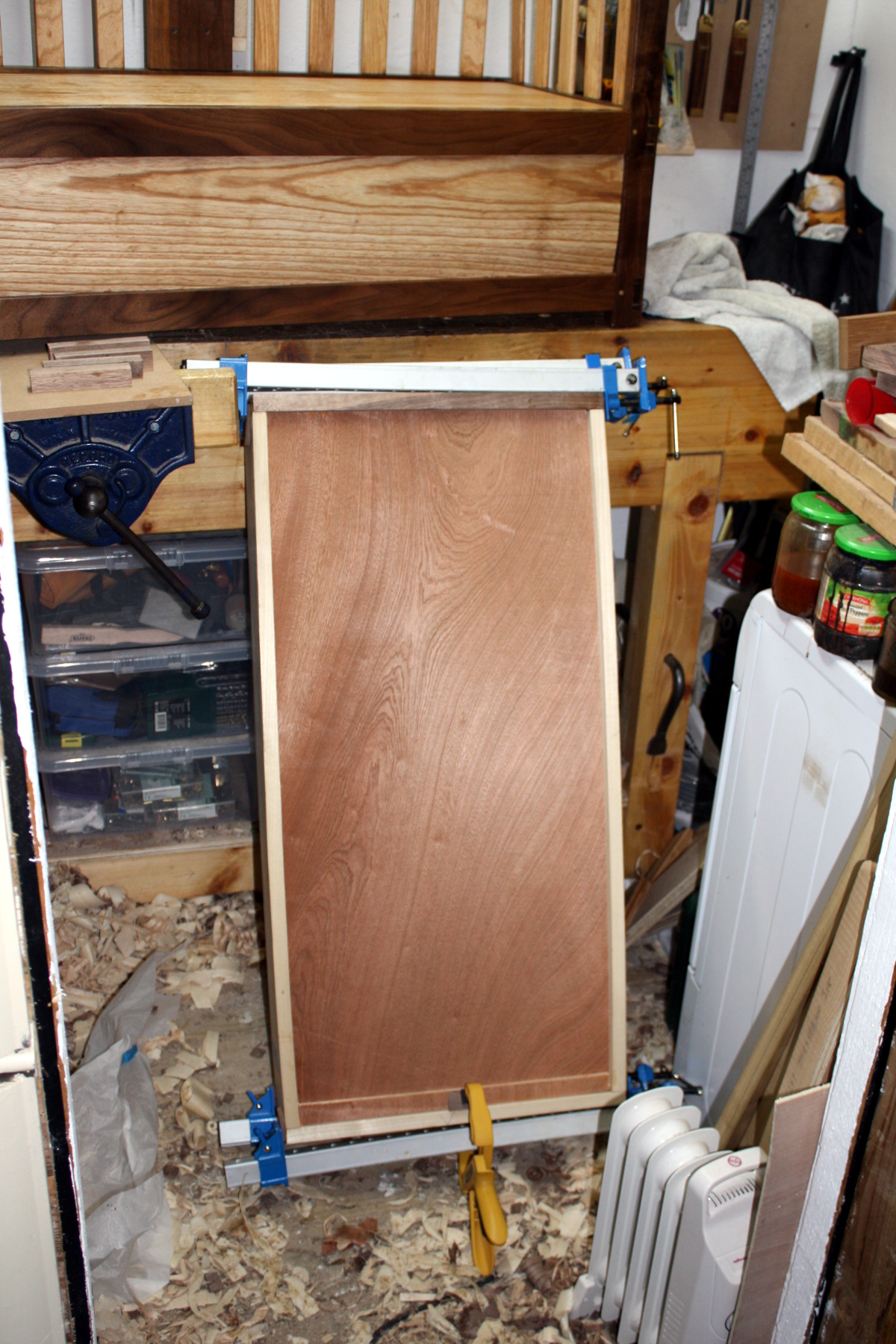 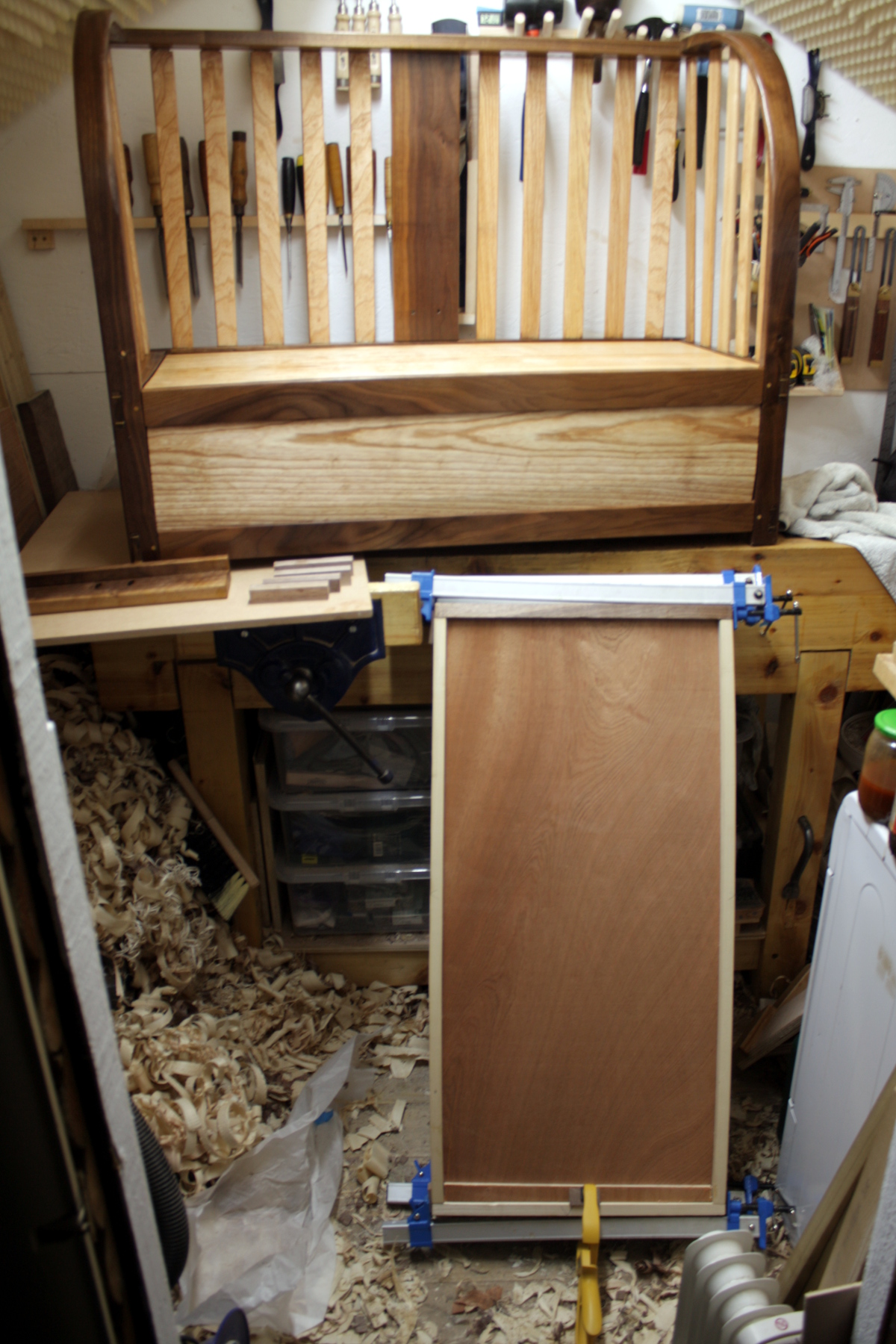